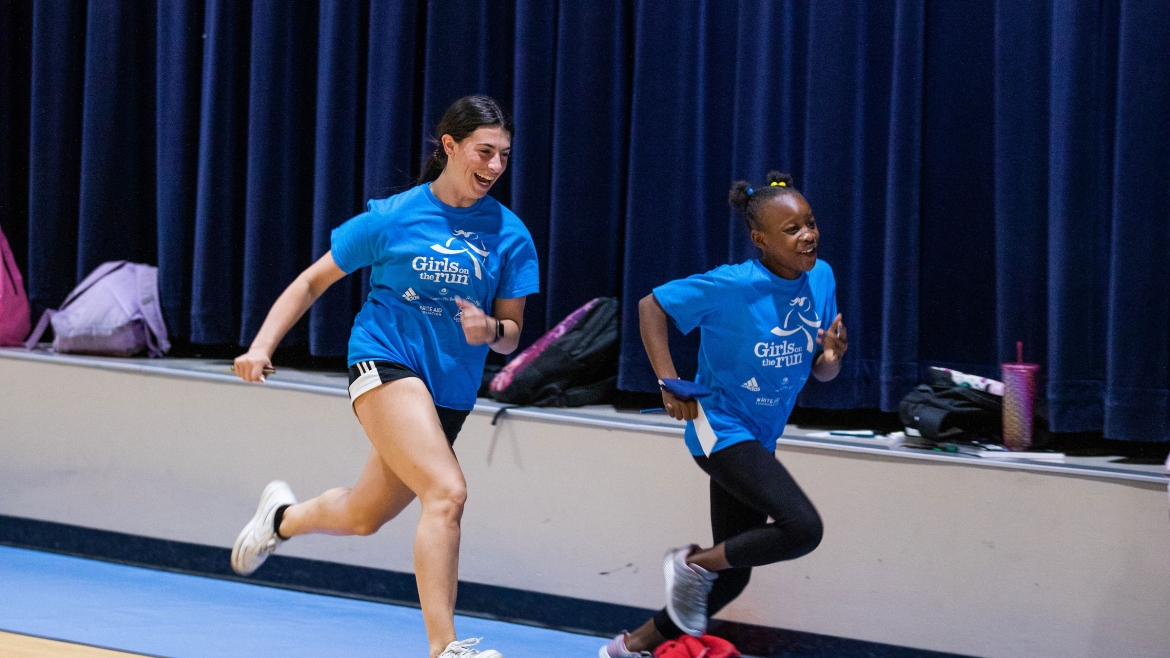 It’s just after 3 p.m. on a Tuesday afternoon, and 11 girls from Holdeman Elementary School in Tempe are getting ready for their afternoon exercise inside the school gymnasium.

Standing underneath one of the baskets is Austin Moritz, a senior at Arizona State University and one of five students from Alaina Zanin's Applied Coaching Communication class who coach the girls.

Moritz, a senior majoring in communication, was an instructor in the Marines. Getting Marines to follow orders is easy. Having elementary school kids do the same is not quite so easy.

“I didn’t go into this thinking it was going to be like boot camp,” Moritz says. “You know, because of the yelling and screaming.”

Eventually, and with a lot of gentle persuasion, the girls calm down. Over the next hour, they’ll run laps around the gym, have a lot of fun, yell some more and use athletics to strengthen their self-belief.

Or as one girl wrote on her identity card: “I feel brave when I stick with it.”

The statistics are concerning.

According to the Women’s Sports Foundation, by the age of 14, girls are dropping out of sports at two times the rate of boys.

A U.S. Census Bureau survey of Income and Program Participation found that just 28.3% of children from low-income families participate in athletics, compared with 50.7% of children from families living at least 200% higher than the poverty line.

“It’s so important for young kids to get outside to play, collaborate, learn teamwork, all those things,” Zanin said. “Research also shows us that there are greater disparities among lower socioeconomic levels and genders. So we’re hoping to provide more access points for girls who maybe didn’t have that previously.”

The class is funded by ASU’s Global Sport Institute and works with Girls on the Run, a program for 8- to 13-year-old girls that promotes empowerment by teaching life skills through lessons and running, and i9 Sports, which offers community-based youth sports programs.

The 12 students in Zanin’s class spent four weeks in the classroom being oriented to different theories and lessons about coaching. Every Tuesday and Thursday afternoon for the last 10 weeks, five of them have been at Holdeman Elementary, which has a minority student enrollment of 94%.

The students aren’t exactly coaches, although the word “coach” adorns the back of their light blue Girls on the Run T-shirts, and the 11 girls from Holdeman ended the semester with a 5K run. That’s because the class is less about athletics than it is about affirmation. 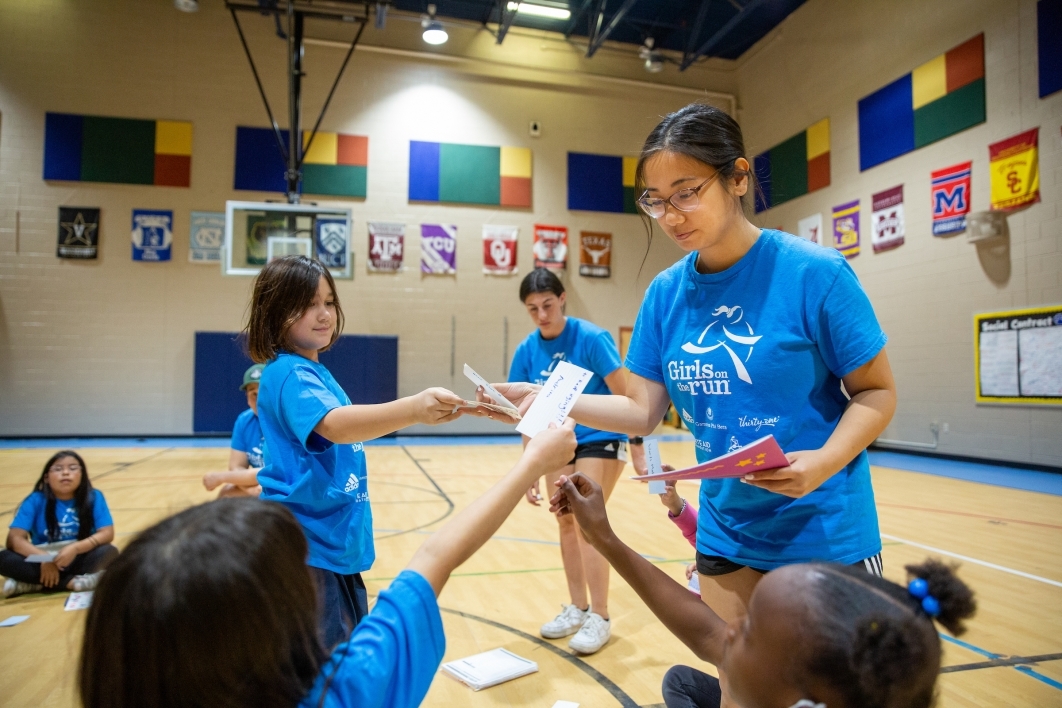 ASU communications senior and coach Samantha Rivera collects prompts from students at Holdeman Elementary School during their last meeting with them as part of ASU's Applied Coaching Communication class. 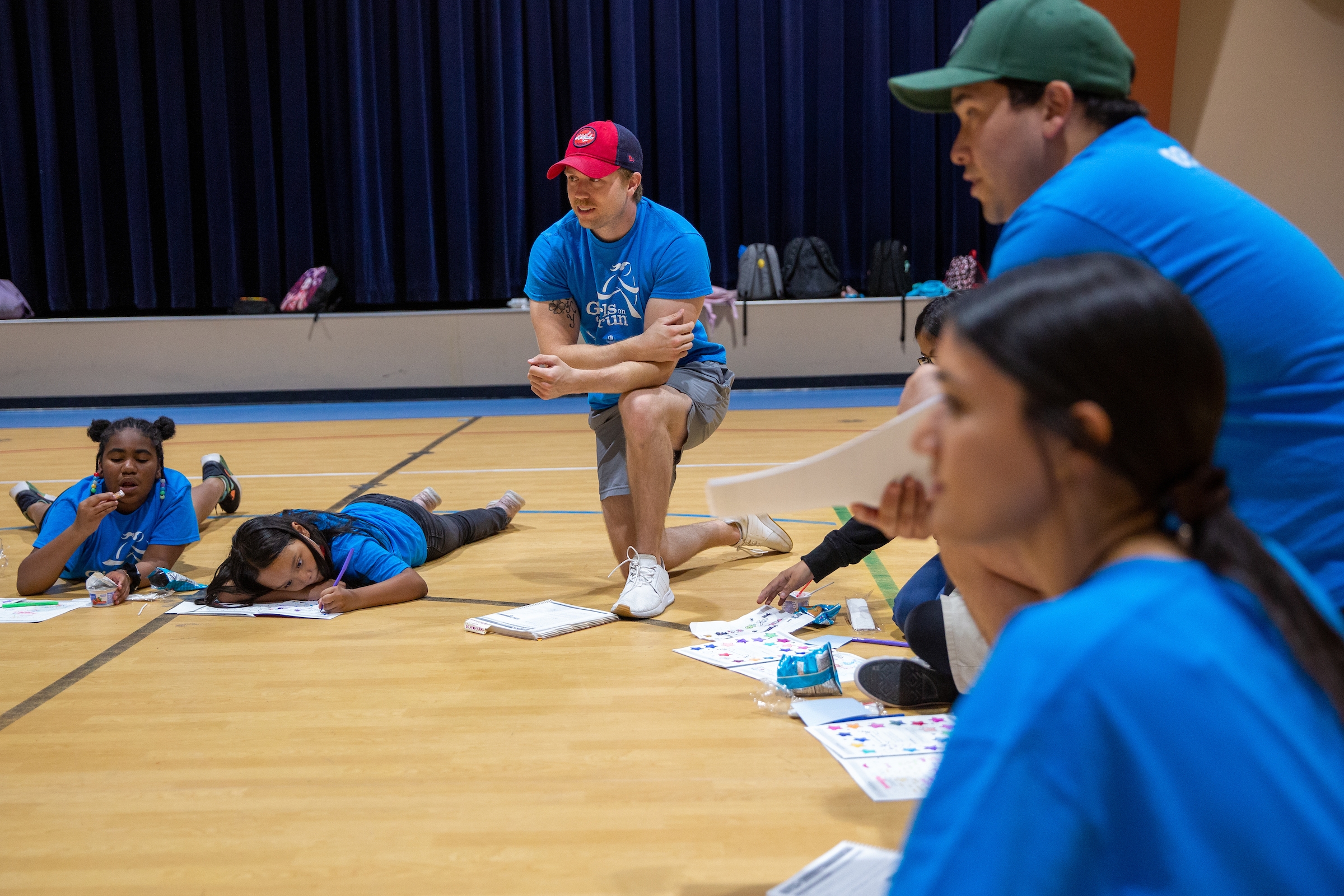 ASU communications seniors Austin Moritz (third from right) and Austin Avalos (right) lead students through prompts during their final meeting of the semester at Holdeman Elementary School in Tempe. The Holdeman Elementary School girls run across the basketball court during their meeting with students from ASU's Applied Coaching Communication class. 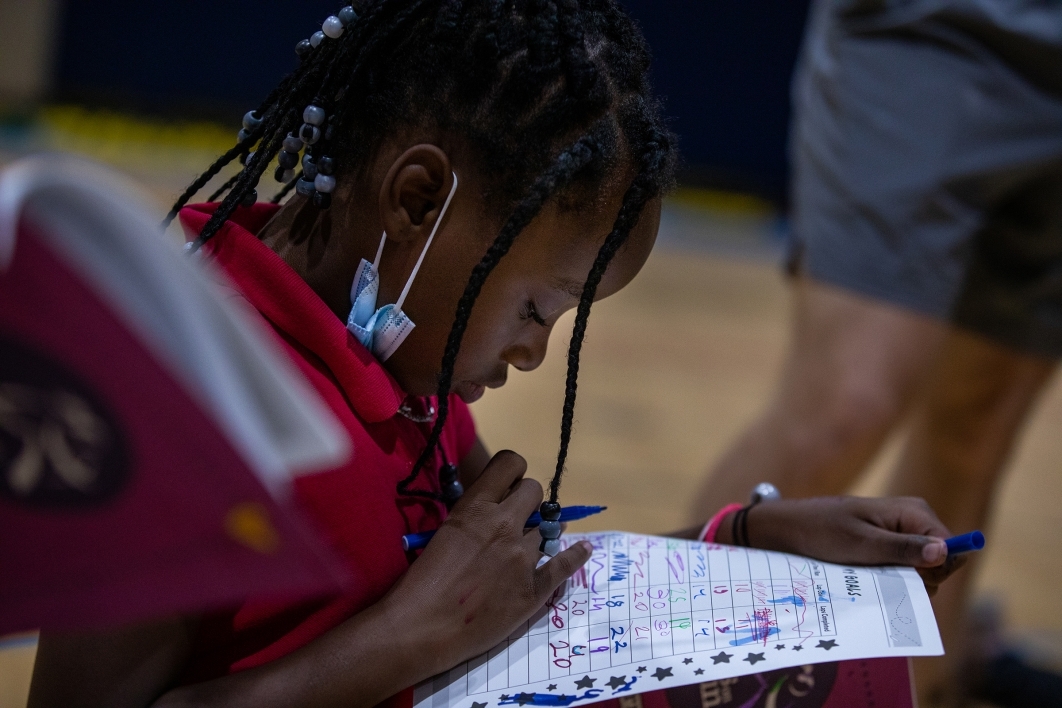 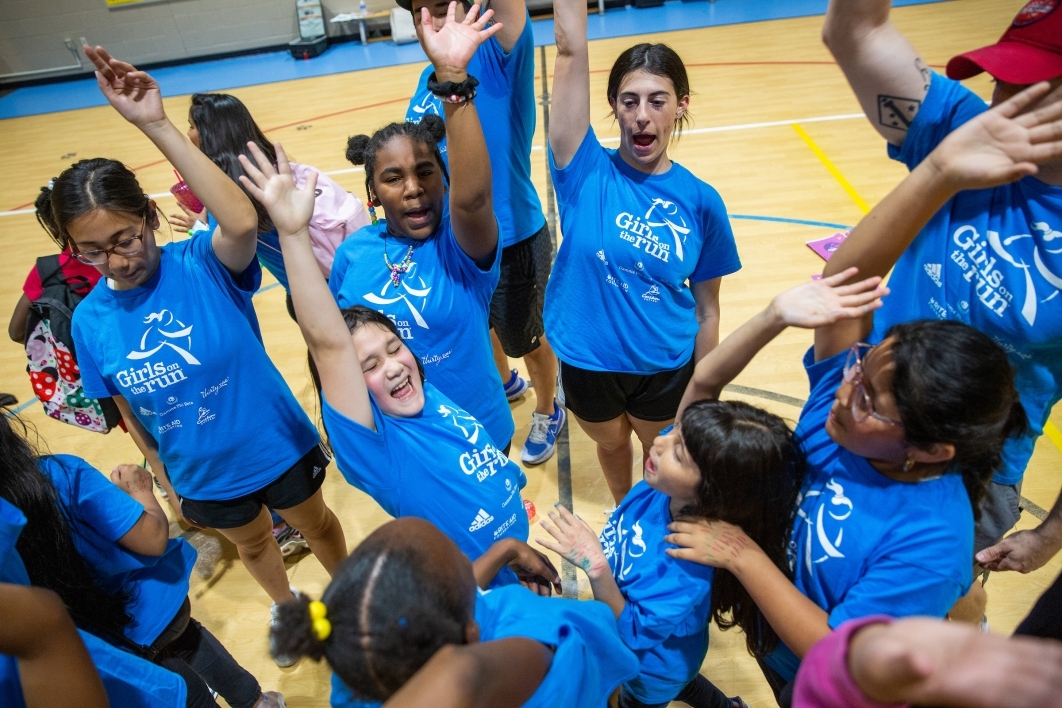 The group gives a final cheer after their end-of-semester workout at Holdeman Elementary School. 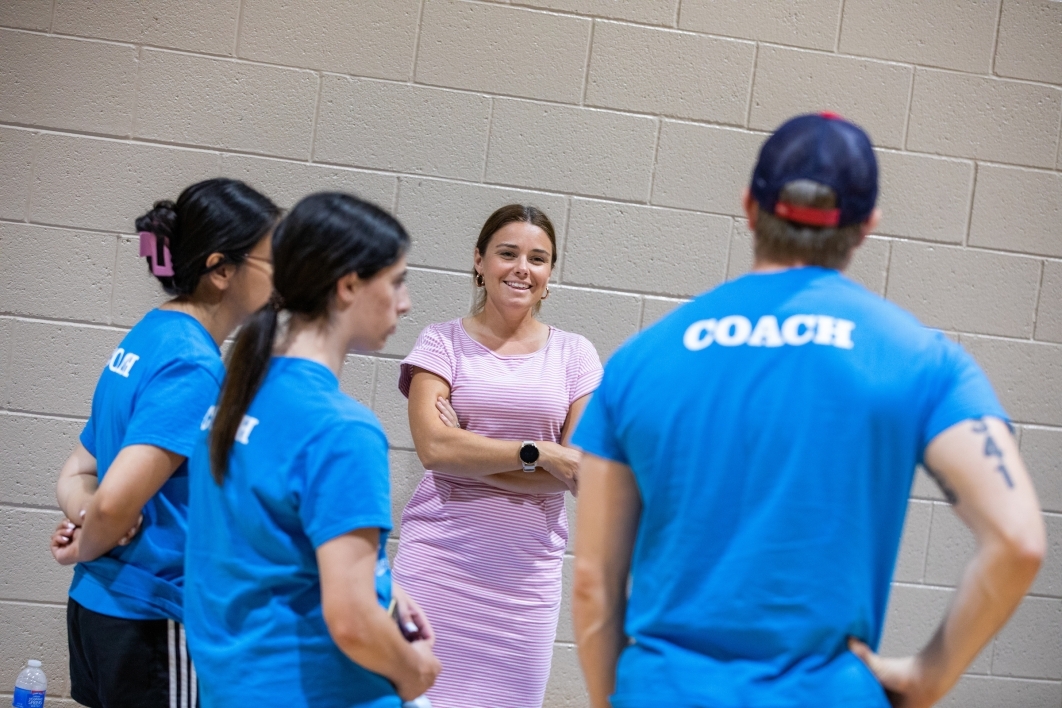 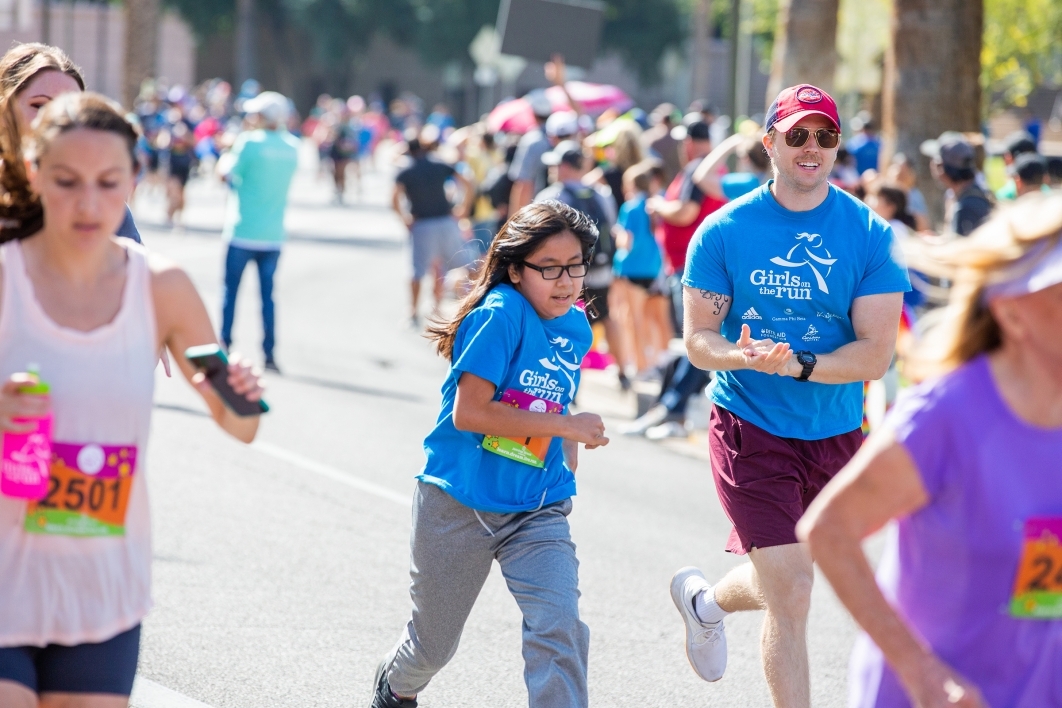 ASU student Austin Moritz joins Holdeman Elementary School student Mikayla as she runs to the finish line of the 5K. 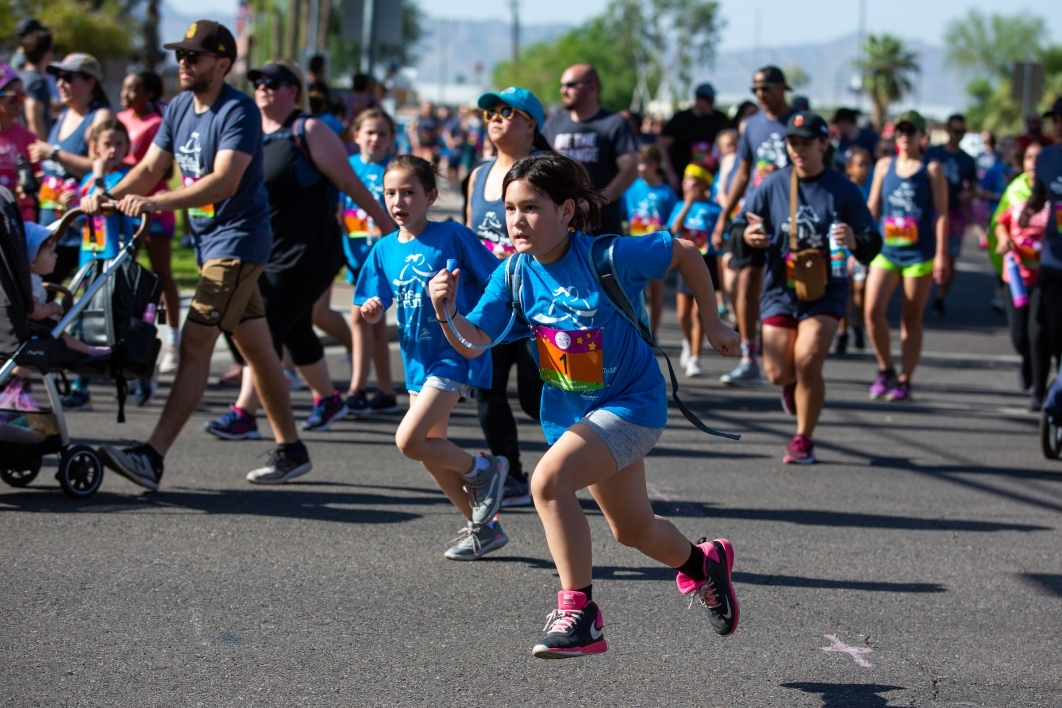 Sky, a Holdeman Elementary School student, makes her way down the first kilometer during the 5K Sparkle Run. 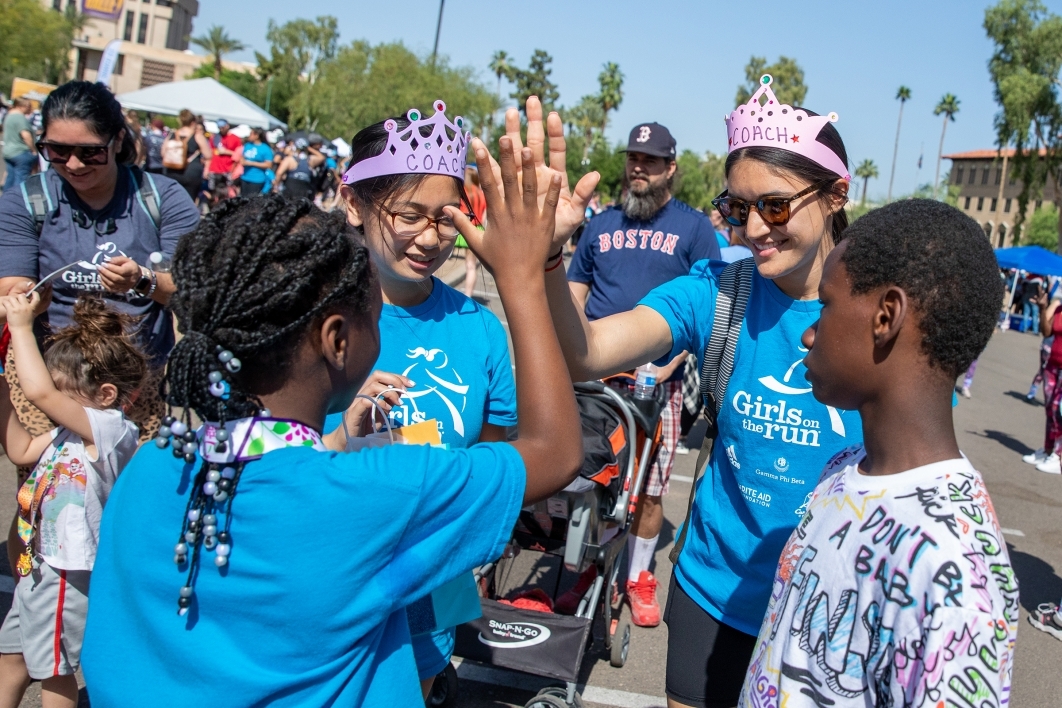 Holdeman Elementary School students Addison and Delilah look at photos their coaches printed of them after completing the 5K run. 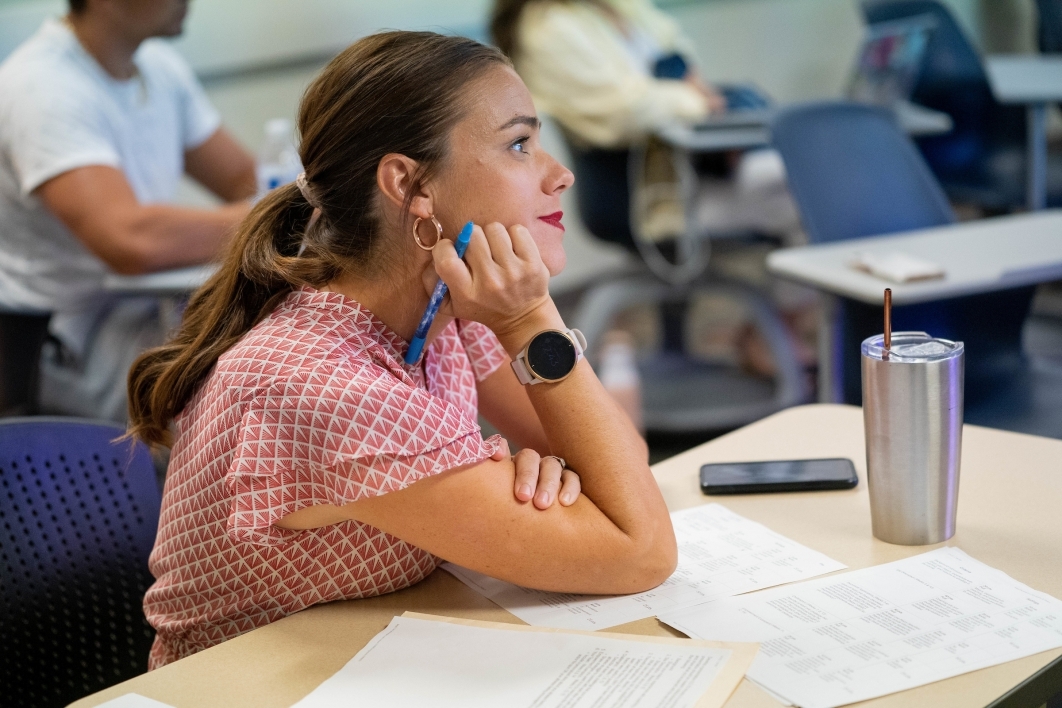 Assistant Professor Alaina Zanin listens to the final presentations given by students in her Applied Coaching Communication class.

The hope is that the girls, through a non-competitive entry into sports, feel better about themselves, not only physically, but mentally and emotionally.

“We’re here to help them learn about their own life skills,” said Samantha Rivera, a student in Zanin’s class. “How to make better choices and support one another and find their power of what they can do to impact not only themselves, but others around them and for their community.”

The students employ a “toolbox” to help that process along. Inside that toolbox are words like "identity," "connectedness" and "empowerment." Those can be nebulous phrases for elementary school-age girls, however, so they’re taught what those words should mean.

Empowerment: “Supporting each other.” “Joy.”

“We’re teaching them social and emotional learning,” said Alex Sokhy, a physical education teacher at Holdeman and the school’s liason for the class. “How to handle their emotions, how to handle being in a social group, how to work with others.”

First, it teaches them how to work as a team. Second, as they grow more confident in what they can do physically, they feel better about themselves and their bodies.

At the start of the class, Moritz said, none of the girls were interested in running. By the end of the class, they were cheerfully running laps in the gym. And as they reached each one of their goals, they realized the value of persistence and hard work.

Their identity cards reflected that confidence. One girl wrote, “I am pretty. I am strong. I am powerful.”

“We’re teaching them not only are they strong in the mind, but they’re also strong physically,” Rivera said.

Zanin said her goal is to expand the program to different schools or programs. But on this Tuesday afternoon, as she sees the girls from Holdeman willingly and cheerfully running laps, she, like Moritz, smiles.

Top photo: ASU communications junior Taylor Divello (left) and Ja’Miha, a student at Holdeman Elementary School, run laps during the final meeting that students from ASU's Applied Coaching Communication class had at the school, in partnership with Girls on the Run. ASU students worked alongside Assistant Professor Alaina Zanin and Holdeman Elementary physical education teacher Alex Sokhy to lead young girls through a curriculum where they spoke about handling their emotions, dealing with challenges and what they liked about themselves. Photo by Deanna Dent/ASU