Alejandro Caballero is a graduating senior from the Arizona State Department of Psychology and the recent winner of the best poster at the AZPURC research conference hosted by the Psi Chi Psychology honors society.

Alejandro Caballero is a graduating senior from the Arizona State Department of Psychology and the recent winner of the best poster at the AZPURC research conference hosted by the Psi Chi Psychology honors society. Photo by Robert Ewing/ASU. Download Full Image

Caballero originally grew up in Dallas, Texas, and later went to community college in California in order to continue his athletic goals.

“When I transferred to ASU from community college, my goal was to play Division I football. It had been my whole life up until this point. I had a passion for sports, competitions, football and soccer, specifically. When that didn’t happen according to my plan I realized that it was for a greater purpose – to make a difference in the lives of kids,” Caballero said.

Caballero is an undergraduate research assistant in the Emerging Minds Lab led by Assistant Professor Kelsey Lucca, where he assists with research on childhood curiosity, resilience, and developmental trajectories of children.

“I've always been interested in thoughts, emotions, and actions. I love helping people and I feel like a lot of our thoughts, actions, emotions, or traumas we may possess stems from somewhere in our childhood whether we realize it or not,” Caballero said. “The development of persistence in children is so influenced by the adults in their lives whether we realize it or not.”

When his football plans didn’t pan out, he found that he was in a funk and didn’t know what he was going to do next. He had been working hard every single day in and out of the classroom and the void of football left him feeling like something was missing.

“It was tough at first trying to adjust to a new life, trying to figure out what my passion is. I took a step back and thought about my personal experiences and it really helped with the transition,” he said, adding that he sympathizes with kids who have experienced challenges. “I see myself in every kid. I’ve been that kid who’s ‘screaming for help’, through actions, acting out at home and school. As a kid trying to process complex thoughts and emotions, I know how difficult it can be and that’s what led me here. I need to be there for those kids who need help but don’t know where to turn.”

While Caballero knew he wanted to go into research, he wasn’t sure about which lab was a good fit for his personal interests in children and developmental psychology. After graduation, he plans on becoming a therapist that helps at-risk children and he felt like understanding the research behind interventions would be essential.

“Coming across the Emerging Minds Lab was a perfect fit. They are so supportive and while they had a good amount of applicants when I applied, they still chose me. I was so blessed to be accepted and mentored by such a great group of people,” Caballero said.

Caballero was one of the first students to join the Emerging Minds Lab and is considered one of its founding members.

Caballero personally has been conducting the research with families via Zoom and while there are some difficulties like distractions at home, he found that the children were more comfortable in their home environment and opened up much easier.

“I’ve known since I was a kid that I was destined to work with kids. I love helping people and I feel like a lot of our acting out, or emotions are developed during experiences in childhood. You can position someone for lifelong success just from the impact you have with them when they’re 6, 7, 8,” he said.

Caballero’s research project focused on how children learn to value what they work hard for.

“The idea for the project came up at one of our weekly lab meetings. Alex was leading our group through an article discussion on “mental effort” and we started talking about the importance of effort in our everyday lives and in achieving our long-term goals. Even though working hard is often exhausting, it is at the same time rewarding – the sense of accomplishment we get from doing hard things pushes us to endure through challenges, to persist even in the face of failure,” Lucca said.

“We talked about how important it is then to understand that our efforts are valuable, and it got us thinking, how do children first reason about the value of their hard work? Do they understand that hard work is valuable, or do they prefer things that come easy to them?” Lucca said.

“The results in my study showed that the less effort the children put in, the more they valued that specific task," Caballero said. "Additionally, then it was the cognitive effort that they valued more compared to physical effort. This was a surprise to me because I was under the impression that the more work they put into the task they would value it more. They put in all the effort and it was costly from an energy perspective, and they should value it more."

While the findings were surprising, he is interested in conducting future research to find out more context around the research findings.

“Since kids seem to value what comes easy to them over what they worked hard to achieve, these findings really point to the importance of explicitly teaching about and talking to young kids about the value of hard work," Lucca said.

“Alex played an essential role in every step of this research project — from our initial brainstorming sessions to the generation of creative ways to test our research questions. Alex worked closely with our lab manager, Sarah Kiefer, to collect all the data for the study. Together they ran Zoom sessions with over 150 families,” Lucca said.

When Lucca and Kiefer approached Caballero about submitting his research project, "Worth the Wait: The Role of Cognitive and Physical Effort in Shaping Children's Value Judgements, Preferences, and Behavior" to the AZPURC contest, he was initially intimidated and anxious about sending in his project, but they convinced him to try.

“They said, Alex, we’re here to support you and you’ve put in the work. You’ve read all the sessions, you’ve done all the coding, you’ve looked at the data, you know this! Without them I wouldn’t have been able to do it,” Caballero said. “They were so supportive and helpful and even showed up in force to my actual presentation. The whole experience was so overwhelming but so rewarding.”

“Alex’s project is an important piece in the broader puzzle of trying to understand how to support children’s perseverance and persistence in the face of challenges,” Lucca said.

When Caballero looked back at some of the challenges and experiences in his past, he shared that he wasn’t sure he would have ever even attempted college let alone graduate with research experience and plans for a future master’s degree.

“I look back at where I was then and where I am now, and it makes me so happy,” Caballero said. “When you feel like you are at the point where you want to quit and give up, that is the moment where you need to push harder than ever because something great is on the horizon.”

Editor's note: This story is part of a series of profiles of notable spring 2022 graduates.As a pre-teen, Emma Softich recalls watching an IMAX movie with her dad about the wonders of the Hubble Space Telescope and viewing the amazing images from the universe and beyond. She recalls at that moment thinking, “I want to do that!” and knowing this was the field she would study.Softich moved fro...

As a pre-teen, Emma Softich recalls watching an IMAX movie with her dad about the wonders of the Hubble Space Telescope and viewing the amazing images from the universe and beyond. She recalls at that moment thinking, “I want to do that!” and knowing this was the field she would study. 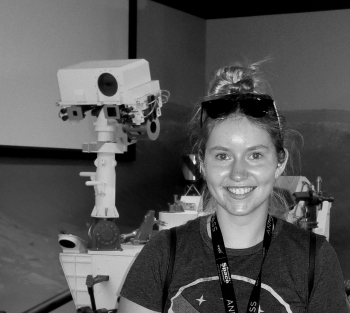 Softich moved from her hometown of Missoula, Montana, to attend ASU specifically for the unique astrophysics program, which highlights collaboration between the sciences. This spring, Softich, a recipient of the Ronald Greeley Planetary Geology Scholarship, will graduate with a Bachelor of Science in astrophysics and a minor in physics from ASU’s School of Earth and Space Exploration (SESE).

As part of her undergraduate research, Softich made a remarkable discovery: the widest imaged pair of brown dwarfs, intriguing objects whose masses are categorized between stars and planets. She was the lead author of a published paper on this discovery.

Through her experiences at ASU, Softich has learned valuable life lessons, including that “failure can be a learning experience.

“I was once the type of student who considered it to be the end of the world to get an A-minus, and I found that's not realistic," she said. "If you are learning and making progress, it doesn’t matter how many times you fall if you continue to get up.”

She credits Associate Professor Jennifer Patience and ASU collaborator Adam Schneider for learning the importance of collaboration and diversity of thought.

“Emma has shown a commendable interest in supporting the academic progress of incoming ASU SESE majors, serving as a mentor for freshmen in a semester-long class that matches upperclassmen with freshmen,” said Patience. “In the spring – when most seniors want to finish up and enjoy activities – Emma led weekly problem-solving sessions for the astrophysics majors.”

Following graduation, Softich will attend the University of California San Diego this fall to pursue a PhD in astrophysics.

“I am certain that Emma will advance the field of brown dwarf research, and she will be the first to volunteer to share new discoveries with other students and the public,” said Patience.

Softich shared a few thoughts about her time at ASU.

Answer: Keep going. Classes become more challenging, pandemics throw a wrench in things, but the only way forward is through. Keep going, because it gets better and in the end is worth it.

A: The sixth-floor balcony in ISTB4. The view of campus is very pretty; it's a good place to study with friends or just sit and enjoy the fresh air.

A: I would put that money towards ending hunger in the U.S. According to Hunger Free America, it's estimated that it would take close to $25 billion to really end hunger in the U.S. But donating this $40 million would be a start.