In December 2014, sisters Rania and Juliana Jundi emigrated with their family from northern Iraq to Arizona amidst the fall of Mosul. At the time they emigrated, Rania and Juliana were teenagers and spoke only Kurdish and Arabic.

Juliana and Rania Jundi (left to right) will graduate this spring with bachelor's degrees in biology from the New College of Interdisciplinary Arts and Sciences. Download Full Image

“My parents decided that they have to get out to give us a better life and better opportunities,” Rania said. “At first, I was very sad and it was very difficult for me to leave everything behind. … I wasn’t able to communicate with people and I wasn’t able to understand them.”

Now, less than 10 years later, Rania and Juliana will both graduate with bachelor’s degrees in biology from the New College of Interdisciplinary Arts and Sciences at Arizona State University this spring.

Because their father was a math teacher, Rania and Juliana excelled in math and science early on. Their mother attended law school, and always encouraged them and their four siblings to make education a priority. But because of the language barrier, making the transition to the U.S. education system was challenging for them.

“I remember I got a 50% in my math class,” Rania said of her experience entering high school. “Math was my favorite subject and I was always scoring really high in math. So seeing a 50% in my favorite class was very sad for me. I would start crying and I just didn't know how to figure things out because I wasn't able to communicate with people.”

As Rania and Juliana began to acclimate over time and learn English in high school, they took advanced math and science classes. Upon graduating from high school, they knew they wanted to continue their education journey. They landed on ASU’s New College, enticed by the biology program.

“ASU was the dream school for me,” Rania said. “I Googled one time, ‘What is a good school to go to in Arizona?’ ASU popped up and I read a description and it really caught my attention.”

Right away, Rania and Juliana became involved with a number of initiatives on the West campus. Rania, who minored in psychology, founded the Cultural Diversity Club as a second-year student. Juliana founded three clubs: the Pharmaceutical Student Association, Sun Devil Cosmetics and the Iraqi American Student Association. She also served as the vice president of the Cultural Diversity Club.

Juliana shared that she was inspired to start the Iraqi American Student Association in an effort to bring Iraqi students together and create a sense of belonging.

“Iraq is a country of rich culture and one of the most culturally diverse nations in the Middle East. I started the association to promote awareness and appreciation of the culture, while helping the community to better understand the misconceptions that some people face,” Juliana said. “There's a phrase that I always use — kulnah al Iraq — which means we are all Iraq. It doesn't matter what ethnicity or religion you are — we are the same. I wanted to promote this idea across ASU.”

Carolyn Starr, the director of community events and experiential programming at the West campus, served as a club adviser for the Cultural Diversity Club.

“When Rania and Juliana heard that anyone can start a club with two other friends, they jumped in with both feet,” Starr said. “I knew from the start they were both high achieving, hardworking, encouraging students. They always participated in class and encouraged their friends to do the same. They tried different things but their passion really came out with the Cultural Diversity Club. Rania and Juliana are true leaders who are an inspiration to myself and others.”

Although their path wasn’t always easy, Rania and Juliana agreed that having each other made the experience much easier to navigate.

“Going through my college career with my sister has been an amazing journey,” Juliana said. “Me and her have gone through so many things that were really hard for us … but it only showed us how strong and smart and talented we are to overcome all the challenges and obstacles we’ve had. … We started from the lowest level you can think of, and here we are right now, getting ready for our graduation from ASU.”

Looking back on their road to graduation — from the time they arrived in the U.S. to today — Rania said if it weren’t for the sacrifice her parents made she and her sister wouldn’t be graduating.

“My parents had to leave a lot behind such as friends, family, their language and the community and environment where they were raised most of their life. They left all of that behind to be able to provide for me and my siblings a better life and to give us the opportunity to have a better future,” Rania said. “This means a lot to me, and I respect what they did for us a lot. They basically sacrificed their lives to give me a life.”

After graduation, the Jundi sisters plan to continue pursuing their education and aspire to start careers in the medical field. Rania will continue doing research and is gearing up to take the MCAT, while Juliana plans to attend pharmacy school in the fall. 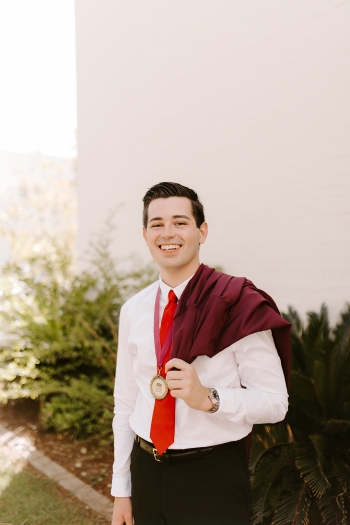 During his time at ASU, he studied abroad in India and Argentina, and interned at the Federal Reserve doing economic research. He helped direct an environmentally focused portfolio of over $1 million for ASU Enterprise Partners and worked with the Gammage Scholars to help families in the Phoenix Valley succeed.

For these reasons and others, Almeida was selected as the spring 2022 Dean’s Medalist for the Department of Economics at The College of Liberal Arts and Sciences.

But Almeida doesn’t take his Sun Devil experience for granted. He credits support from donors in helping fund his educational journey.

“The reason that I was able to pursue my degree was the incredible generosity of the sponsors of the Business School Scholarship, Earl and Ellen Davis Scholarship, Gammage Scholarship, IGNITE Fellowship, National Hispanic Scholarship, School of Civic and Economic Thought and Leadership's Founders' Scholarship, Spanish Summer Program Scholarship, as well as the Jonathan and Helen Wexler Family, along with the support of my friends and family,” he said.

Now, Almeida is prepared to utilize his skills to solve societal problems. He plans to do economic research for the next two years as a research fellow at Stanford University's Graduate School of Business, where he hopes to earn a graduate degree in economics to continue studying the role that financial markets play in human and environmental betterment.

A: After my first year at ASU, I underwent an unexpected surgery to remove a bone cyst from my spine as I was taking summer classes. On the day of the surgery, I even turned in a problem set for my linear algebra class.

I was simultaneously confronted with my mortality and choices about my major, my career and the legacy that I wanted to leave. I decided to study mathematics and economics to try to make the world a better place.

A: I came to ASU from Illinois knowing only a few people, so adapting to the environment here was a fun challenge. Through dorming at Barrett, clubs and classes, I have made many lifelong friends and relationships. I also convinced my sister, now a sophomore, to join me at ASU.

A: It is really challenging to narrow down the breadth of guidance that I have received into a singular moment. I do want to recognize that my interests in research have been nurtured by gifted academics Drs. Ross Emmett, Chad Stecher, Michael Hanemann and Christos Makridis.

In economics, I am indebted to Drs. Edward Schlee, Edward Prescott, Bart Hobijn and Rajnish Mehra for their mentorship in pursuing a career in the field, and from the mathematics faculty, I have received valuable guidance from Dr. Donald Jones.

The leadership at the School of Civic and Economic Thought and Leadership as well the administrators at Barrett have also contributed to my success.

Q: What's something that you've learned during your time at ASU – in the classroom or otherwise – that surprised you or changed your perspective?

A: I traveled to India to study abroad with the School of Civic and Economic Thought and Leadership. My cohort worked with a group of rural night schools affiliated with the Barefoot College in Tilonia, Rajasthan. I had the chance to talk with some of the students at a night school, and when I asked the students about their aspirations, they responded that all they wanted was to attend school all day. It changed my perspective on education and empowered me to fight for students here in Maricopa County that face systemic barriers to their success.

I had the privilege of teaching children who had sought asylum from countries across the world with RISE Tutoring, and when the pandemic compounded barriers for disadvantaged students in Phoenix, I helped to organize with the Gammage Scholars, a community-based campaign to empower families in getting digitally connected.