The discussion about the economic outlook was among W. P. Carey School of Business faculty, co-sponsored by the school and the Economic Club of Phoenix.

The dip and rise of the economy through COVID-19, and the recovery, is “unprecedented," according to Hoffman, director of the L. William Seidman Research Institute and a macroeconomist.

The trade economy is completely disrupted by the pandemic, but Hoffman expects exports to turn around.

All jobs gained since 2011 have been lost, but “we’re climbing back,” he said.

Inflation is the highest in 40 years. Too much money chasing too few goods is the root of inflation. The pandemic, supply chain disruptions, labor market separations and excessive monetary expansion by the Federal Reserve are the causes, the panel said.

Inflation hits different people differently: lenders are hurt, and those on fixed incomes and renters are hit the most.

According to the panel, the Fed was slow to react. Since March 2021, the Fed has become increasingly hawkish. “Rate tightening is coming,” Hoffman said.

Investment in oil has dropped, so gas prices are up. “Headwinds are everywhere,” he said. 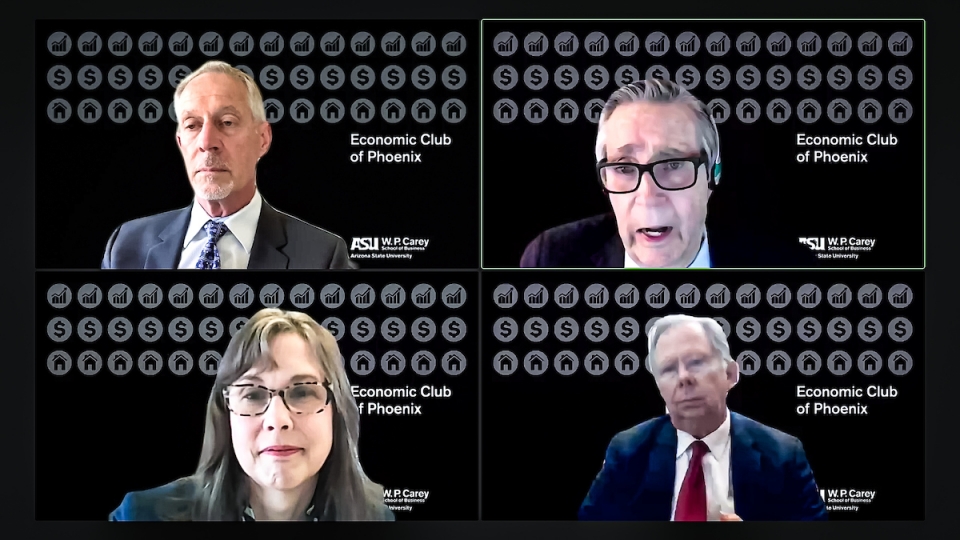 Among the bright spots is a trend of onshoring new U.S. capital investment.

Hoffman’s worries? Tribal politics get way too much emphasis in the media; globalism must be embraced over nationalism; immigration keeps out people who want to work.

Lee McPheters, a research professor in the W. P. Carey School of Business and director of the school’s JPMorgan Chase Economic Outlook Center, said despite the flood of California license plates seen around the Valley, COVID-19 deaths decreased expected gains in new residents.

Job growth is strong at 4.2%, “but that puts us in the middle of the pack,” McPheters said. “Our growth is behind us, and that’s the way we’re looking at it now.”

Unemployment is at an all-time low in 17 states. Arizona has 3.3% unemployment. New Mexico is at 5.3% — the highest in the country.

Arizona is No. 4 in rate of population growth. Many states lost population because of COVID-19, low birth rates and exodus to other states. The fastest-growing states are Florida, Texas and Arizona.

In metro Phoenix, “we expect strong growth,” McPheters said. Single family and multifamily permits will be up in response to housing pressures.

The Phoenix consumer price index, the price of a weighted average market basket of consumer goods and services purchased by households, is at 10.9%. It tops all metro areas.

Wage increases also top all metro areas, at 6.4%, but they’re not keeping pace with inflation.

“What that means is real wages are down,” he said.

The biggest risk to the Arizona economy is the national business cycle. Tech and distribution are the key sectors to watch. Arizona has the most building permits issued since 2006.

The real estate market is the best it’s ever been, but there are some critical concerns, said Mark Stapp, a Phoenix-area real estate expert and the Fred E. Taylor Professor in Real Estate at ASU.

“We have less than one month existing inventory in this marketplace,” Stapp said. What that means for buyers is they had better have deep pockets. The mean new home price is 11.7 % higher than the average earner’s mortgage capacity.

A major cause of the low inventory is years of underbuilding. 2016 was the last time deliveries exceeded absorption of homes. The population is estimated to grow by an estimated 90,600, but there are only 8,500 homes on the market.

“That is an incredibly low number,” Stapp said.

Also, supply chain woes are choking home delivery. “You can’t get them finished all the time,” he said.

Editor's note: This story is part of a series of profiles of notable spring 2022 graduates.Having a job lined up after graduation is great. Landing a job you helped create is phenomenal.“I am so excited. It just feels like this is where I’m meant to be. This is my passion and I hope to improve the lives of everybody in my care,” Hannah Challa said.The Phoenix native is graduating this...

Having a job lined up after graduation is great. Landing a job you helped create is phenomenal. 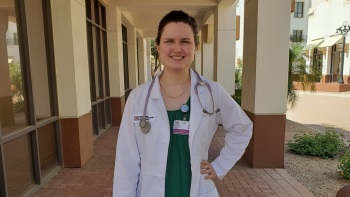 “I am so excited. It just feels like this is where I’m meant to be. This is my passion and I hope to improve the lives of everybody in my care,” Hannah Challa said.

The Phoenix native is graduating this May with her advanced nursing practice (acute care pediatric nurse practitioner), DNP from ASU’s Edson College of Nursing and Health Innovation.

Challa already works for Phoenix Children’s, where she started her nursing career seven years ago and where she will continue it but in a new role that she helped design.

“I’ve accepted a position at Phoenix Children’s to become the inpatient complex care program coordinator,” she said. “This is a continuation of my doctoral project.”

The project focused on addressing a gap in care that can happen between the time a child is discharged from the hospital and when they are able to be seen for their follow-up appointment. It’s an issue that Challa has witnessed firsthand.

Creating a position to coordinate that in-between time for patients with complex medical conditions was her solution to closing that gap. Challa’s new role is part of a two-year pilot study so they’ll be collecting data all along the way.

“We’re going to start off in the airway unit and help build this program so there will be a nurse practitioner who follows the child from the inpatient setting and helps them transition to the outpatient setting,” she said.

The goal is to eliminate confusion and medical setbacks for patients and families through this complex care coordination.

Challa says that none of this would have been possible without the DNP program. Below she shares how ASU prepared her to address this challenge and offers words of encouragement for current students.

Answer: I fell in love with pediatrics as a nursing assistant and I knew I wanted to at least be in the hospital setting with kids. I also knew that I wanted to continue to further my education at some point.

After nursing school, I had the privilege to transition into the nurse role at Phoenix Children’s. My passion for pediatrics grew as I served this population. Over the years, I began to identify specific needs of this population which I knew I could address if I became a nurse practitioner.

This is when I began investigating nurse practitioner programs. I started my search focusing on in-state programs, not even aware that there was a pediatric acute care nurse practitioner program. As soon as I found this program, I knew it was the one ... That was my “aha” moment. I found my profession! And what made me more excited is that it is at my local in-state university! I had found what I am supposed to do and where I am supposed to be!

A: I have learned many things while at ASU. One thing I have particularly learned is that your perspective should never remain stagnant. Strive to learn and understand the world with open eyes; don’t assume you have completely understood someone or a problem. Keeping an open mind can change the world.

A: Danielle Sebbens and Aimee Bucci. They are both pediatric nurse practitioners, they both work at Phoenix Children’s and they’ve just been so helpful! They encourage you, guide you and help you understand what it means to be an NP (nurse practitioner) and it's such a different feeling from the undergraduate experience. In this program, it was all about "let’s work together to help you get to this goal."

A: I would remind them that, yes, this program is hard but it’s worth it and you are not alone. This isn’t something you do by yourself, you do it as a team and that’s why I love mentoring students. Just being their person to bounce questions off of and to encourage them when they’re not sure if they can do it anymore.

Also, I think one of the biggest things people struggle with right now is fear of failure or making mistakes that they think affects their ability to achieve their dreams. But they just need to continue to pursue their dreams and surround themselves with people who will continue to support them and mentor them.

A: I would develop some sort of sustainable program that could address mental health. I’ve struggled with anxiety in the past and I have families who come in with children who have medical complexities and they’re struggling too. I feel like tackling this issue would be a win-win. It addresses the patient, parent and providers who are burned out and stressed out and are dealing with everything.