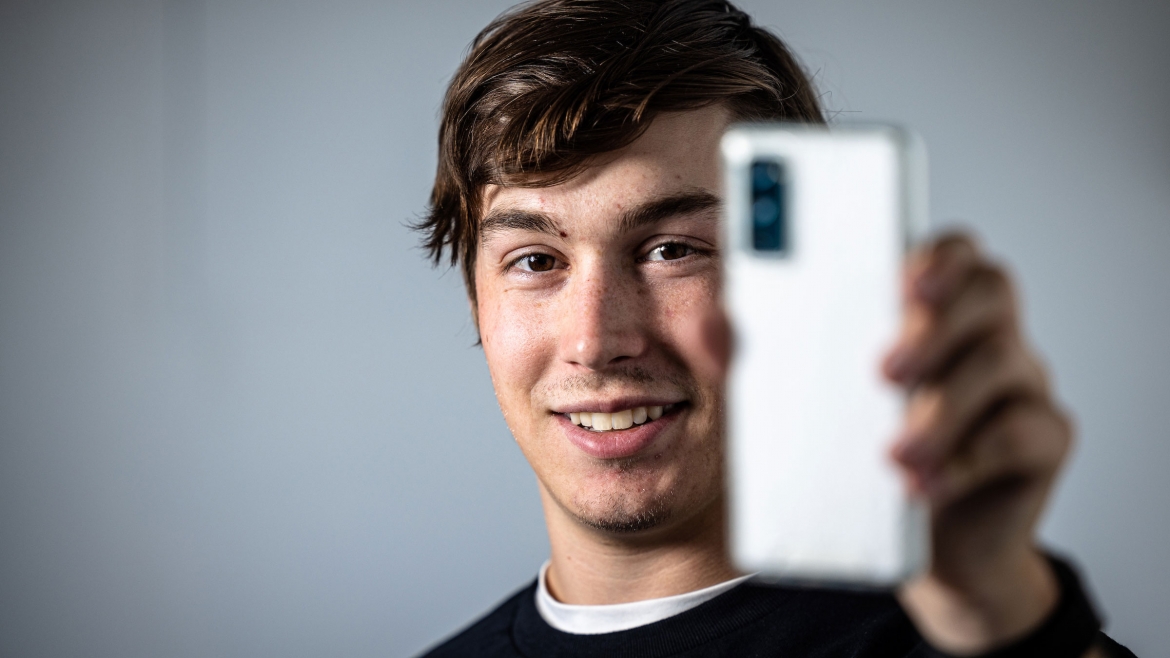 You hear it all the time at Arizona State University.

Be the change you want to see. Create the job you want. Innovate.

“ASU is ... measured by whom it includes and how they succeed.”

In that case, Jordan Fourcher’s story means the university really knocked one out of the park.

Fourcher, graduating this spring with a major in technological entrepreneurship and management, created two inventions while in school and started his own company. The newly-minted engineer is going to work for himself after graduation, “so I can bring my products to market. Cause it seems like Arizona really needs some.”

Fourcher uses his phone a lot. It was constantly overheating at the worst times, in the middle of video calls or when he was outside shooting photos.

“It’s just like, OK, this is ridiculous. Like, come on. So I went out and I found solutions for it.”

The Orange, California, native and founder of Fourcher Technologies is the inventor of the CryoPad and CryoCase. Both inventions have cooling technologies which prevent phones from overheating.

The CryoPad is a wireless charger that actively cools mobile phones down to 60 degrees Fahrenheit using a micro water cooling system with a thermoelectric plate. This allows for sustained cooling in the hottest environments.

Fourcher’s second invention is the CryoCase, is a self-cooling phone case that uses a radiative cooling paint to reflect heat and sunlight. It reflects radiation like a mirror reflects light. The CryoCase gets colder in the sun instead of hotter and can cool phones up to 15 degrees Fahrenheit without using any electricity. 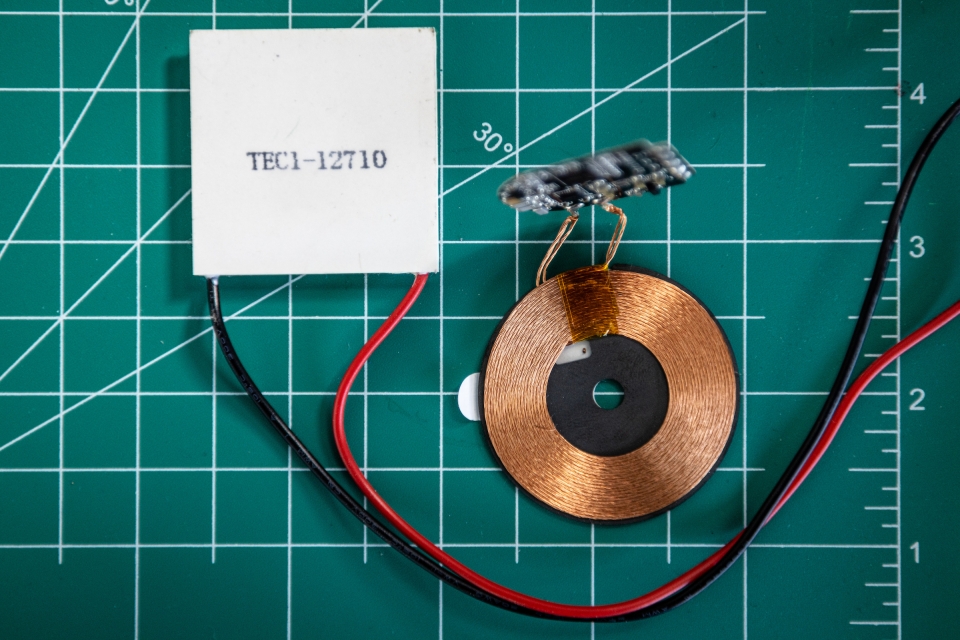 Jordan Fourcher has always been a tinkerer and is now working on a new wireless charger. A new graduate in technological entrepreneurship and management, he is also prototyping his new mobile phone cooling case and will soon get it to market. Fourcher is a two-time Venture Devils winner, gathering $32,000 in seed money to help him on his way. Photo by Charlie Leight/ASU News

Here he answers some questions about his time at ASU.

Answer: I've always had an entrepreneurial spirit. That's what we like to call it at ASU. I've always wanted to run a company, get involved in tech, at least get involved in the development of technical products, like consumer electronics products. When I had the opportunity to launch a company, as part of my coursework through ASU, I just kind of launched it alongside a mock startup that we were doing in class. And it worked out really well. It was a good framework to get it going and I've just been continuing it since that class.”

A: I chose it for the major and it also seemed to be a good environment to have a college education. There were a lot of other schools that I toured in California that didn't seem to be the best environment for learning. And I figured that ASU had a pretty good environment.

A: It's a tie. There's two professors and they're two completely different lessons. So one of them is Professor Steve Cho. And he taught me that not everyone's gonna believe in your idea, but you should still try your hardest. Professor Aram Chomina-Chavez is kinda like the opposite. He taught me that there is definitely a market for even the craziest idea. You just have to go and find it through a lot of market research. So between both of those, it keeps me centered between finding a product that people will love and giving it to those people who love it.

A: Utilize your networks. Really utilize your networks. It's not like I'm doing like a master's or anything. That's it. So having people that I've reached out to, from my previous classes, who've already graduated being like, "Hey, what are you up to?" Now we're working on something together or we're plugged into different networking groups that don't have anything to do with school. It just makes transitioning out of college so much easier and really allows you to propel yourself into whatever you wanna do. So just really utilize and keep those networks.

A: I'm from the Poly campus and I think one of my favorite spots is on top of Santan Hall. There's some chairs up there. It has a nice view of everything. It's pretty cool up there. I didn't go up there super often, but it was a nice place to go to occasionally.

A: Micro nuclear reactors or potentially fusion. I do know some people who are working on some fusion projects that can definitely use that money. It's such a big issue because right now everybody wants to transition to green (energy). It's sustainable energy sources, but there is no infrastructure for it and there's no backbone for it and it's not gonna work at its current pace. We can't just get rid of gas and go straight to solar. It doesn't work like that. We're already seeing the consequences of that in California, where they have blackouts cause they can't support the power cause they switched too quickly. So the solution, in my opinion, is modular nuclear: small nuclear power plants that you can have in every neighborhood that keeps neighborhoods independent from the grid. They're less susceptible like natural disasters knocking out all their power, or cyber attacks or anything like that. They're totally resilient. It would provide very cheap electricity.

Editor's note: This story is part of a series of profiles of notable spring 2022 graduates.Being successful and learning how to tackle new ideas in research is often like playing sports, according to graduating Arizona State University student Devin Bowes.Bowes, who played division II women’s lacrosse at West Chester University of Pennsylvania and had the opportunity to compete nationally, ...

Being successful and learning how to tackle new ideas in research is often like playing sports, according to graduating Arizona State University student Devin Bowes. 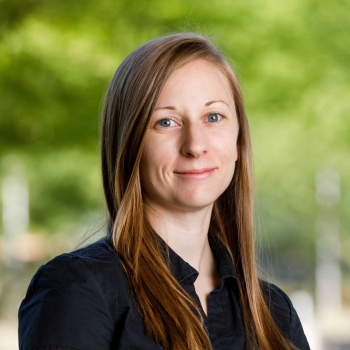 Bowes, who played division II women’s lacrosse at West Chester University of Pennsylvania and had the opportunity to compete nationally, uses her athleticism in the lab.

“Research is both a test of endurance and speed. You have to learn when to pivot, let go and move on, while also learning when it is appropriate to continue to hang on through the finish line,” said Bowes, who is earning a PhD in biological design.

“At the end of the day, if you know why you’re putting in the work, and more importantly, if you understand the broader implications behind the work, then all of the pieces will eventually come together. I learned a lot about my passion for teaching and mentorship,” said Bowes, who was awarded the Dean’s Dissertation award by the Ira A. Fulton Schools of Engineering for her innovative research.

During her time in the School for Engineering of Matter, Transport and Energy, Bowes researched novel applications of wastewater-based epidemiology for assessing population nutrition, infectious disease and chronic illness. This was inspired by her work with the city of Tempe and the Biodesign Center for Environmental Health Engineering to design a COVID-19 dashboard based on wastewater.

Following her graduation, Bowes plans to stay at the Biodesign Institute as a post-doctoral research scholar, before eventually moving on to pursue a tenure-track faculty position at a major research university.

Answer: I worked in the field of nutrition in a number of different roles for several years before I started my doctoral degree here at ASU. In 2017, I worked as a nutritional counselor at a local Women, Infants, and Children (WIC) clinic here in the valley and witnessed many opportunities for improvement in public health and nutritional education that served as the driving force behind seeking a higher education. The experiences I had at WIC and other organizations are still what drive me to serve the community through education, research and empowerment.

Q: Why did you choose Biodesign?

A: I think we chose each other. I was at a time in my life when I felt I could do something to change the world and sought out higher education programs in nutrition at ASU, when I met Dr. Rolf Halden randomly one day in the spring and he told me about his research implementing wastewater-based epidemiology. A few days later, I was enrolled in a doctoral program and began working in EHE.

A: I’ve had the great opportunity to learn from some really amazing professors and mentors here at ASU and was taught many insightful lessons. There are too many to call out by name.

A: Get organized! Get organized yesterday. Also, the 24-hour rule is extremely helpful when receiving feedback, whether after giving a talk or from journal article reviewers. Read through them, give yourself some time to think, and then respond.

A: I really enjoy walking around the green space with the concrete art structure just outside of Biodesign. It’s a nice place to take a quick walk mid-day and think.

A: My initial response to this question is to tackle the issue of disparities in our food system. There are far too many people going hungry in the United States. If I was given $40 million dollars, I would find a way to sustainably feed all individuals.