The prestigious CAREER program identifies the nation’s most promising young faculty members who demonstrate outstanding research, excellence in teaching, and the effective integration of both. 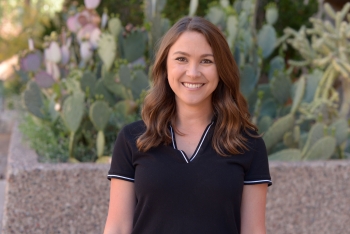 "Being a recipient of the CAREER award on her first submission is a testament to both the quality of her research ideas and her strong research record,” said Sara Brownell, fellow School of Life Sciences professor and director of the Research for Inclusive STEM Education (RISE) Center. “Even as an early career researcher, she is emerging as one of the top biology education researchers in the country and the RISE Center is extremely proud of her successes."

“Dr. Cooper exemplifies our commitment to life-changing research and to excellence in teaching and mentoring,” said Jennifer Fewell, interim director of the School of Life Sciences. “It is wonderful to see her important work continue with support by the NSF CAREER award.”

“This CAREER award is going to allow us to study what aspects of research alleviate and exacerbate students’ depressive symptoms, why this is, and what can be done by both students and mentors to protect mental health,” Cooper said.

Most researchers and educators agree that hands-on immersive research is one of the most lucrative experiences students can engage in. Engaging in research equips students with problem-solving, professional development and communication skills. However, science is also a highly competitive field, infamously characterized by repeated failure, which can lead to doubt and negative self-talk.

“My research group has found that there are wonderful aspects of research, such as establishing positive relationships with lab mates and feeling like you belong in the scientific community, and those aspects can be really protective against depressive symptoms,” Cooper said. “But research can also cause you to feel really isolated, experience harsh criticism and doubt what you’re capable of, which in turn can exacerbate depressive symptoms.”

The project is split into two major components — a national study of undergraduate and graduate researchers and their experiences with depression in the context of research. Data gathered during the study will then be used to develop single-session interventions designed to help students develop effective coping strategies for challenges commonly encountered in research.

Similar interventions have proved highly successful in K–12 students, and Cooper is excited to explore their potential to assist in higher education as well. These sessions will be combined with recommendations for mentors about how to support students and open conversations to further help students who find themselves struggling.

She explained that even simple adjustments such as adding more structure, increasing face-to-face time or assigning additional mentors can be really effective in dampening depressive symptoms.

“This is something I’m really passionate about,” she said.

Funds from the award will also support new programs to further integrate research and teaching. Cooper will develop and teach course-based undergraduate research experiences (CUREs) that build on the work conducted in the overall project. These CUREs in biology education will be available to ASU Online students, providing hands-on research opportunities for many students who have never been involved in such projects.

“I’m extremely grateful that this CAREER award is going to allow me to continue to do that, because I think that it’s really going to strengthen the quality of the research that we’re doing on undergraduate and graduate mental health in biology.”

Student to graduate early with a double major, progress on a master's degree

Editor's note: This story is part of a series of profiles of notable spring 2022 graduates.Halle Aquino, a student at Arizona State University, plans to graduate this May with a double major in public service and public policy and political science while also studying to receive her master’s degree in public administration next spring. Aquino says that achieving dual degrees will help her ...

Student to graduate early with a double major, progress on a master's degree

Halle Aquino, a student at Arizona State University, plans to graduate this May with a double major in public service and public policy and political science while also studying to receive her master’s degree in public administration next spring. 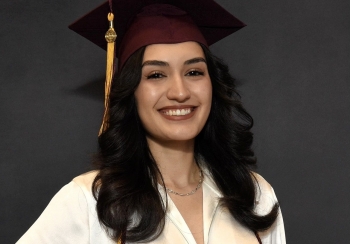 Aquino says that achieving dual degrees will help her “become the most effective public servant possible” and her master’s degree will help to broaden her future line of work.

During her time at the School of Politics and Global Studies, Aquino says that seeing the work her and her colleagues have completed is motivational.

“We are all a part of a collaborative effort to make positive impacts all throughout the world,” Aquino said.

The School of Politics and Global Studies has prepared Aquino for her future endeavors because as a student she had the opportunity to curate her academic and extracurricular path to be relevant to her career goals. According to Aquino, the school provided her the resources to gain experience in the professional world.

Aquino landed a position as an Inaugural Margaret T. Hance Intern with the city of Phoenix, Office of Mayor Kate Gallego, in fall 2021. She was able to see firsthand the key role that local governments play in maintaining the quality of life within communities.

“I had the platform to support the residents of Phoenix, which allowed me to gain valuable experience conversing with such a diverse population of people,” Aquino said.

Aquino is currently an intern in the Office of Representative Greg Stanton where she helps constituents with their issues related to federal agencies such as the IRS, U.S. Citizenship and Immigration Services and the Small Business Administration.

“I don't even know the individuals that I have helped personally, but to think that I have been able to alleviate some of the worry or hardship they have been going through is something that I will take with me into my career: knowing what the feeling is like to create good by helping others,” Aquino said.

On top of interning and studying, Aquino also enjoys dedicating her time to giving back to the community. Her role as entrepreneurship catalyst with the J. Orin Edson Entrepreneurship + Innovation Institute has allowed her to work in partnership with The Difference Engine, an ASU Center for the Future of Equality, to create a program track for social entrepreneurs and nonprofits within the ASU community.

“I was motivated to join the development team for SuperCharger as I found a fascination with the power that entrepreneurship has in reducing social, political, and economic inequality. SuperCharger will provide visibility and a platform for small grassroots social entrepreneurs to improve, advance, and accelerate the impacts of their endeavors,” Aquino said.

Alongside studying for her master’s degree, Aquino looks forward to continuing her passions post graduation as an intern for Congresswoman Ann Kirkpatrick of Arizona where she will represent areas of southern Arizona including Tucson, Sierra Vista, Bisbee and Douglas.

Aquino is a first-generation student who will be graduating as a recipient of the Moeur Award by the ASU Alumni Association, with a 4.0 cumulative GPA.

Aquino expresses her gratitude to those who have inspired and aided her in her academic career including her friends, family, professors, faculty members, support staff and supervisors in the ASU community.

Question: What was your "ah-ha" moment of "I am where I am supposed to be"?

Answer: This realization came to me only recently when I was self-reflecting on my undergraduate experience. So, today's world is confronted with several worrisome challenges, prompting many people, including myself, to be concerned about what the future holds for us as a collective. Despite this, I can't help but remain hopeful about the next generation of innovators, creators and leaders who have yet to contribute to the betterment of our society. This was when it dawned on me that I couldn't envision myself in any other field, as I aspire greatly to be one of those individuals. The thought confirmed that I was correct in seeking a degree path that would lead to a career in public service.

Q: Have you had a favorite professor from the School of Politics and Global Studies? How did you connect with them and why is this relationship important?

A: Dr. Gina Woodall has been an absolute inspiration to me in my undergraduate studies. Because I participated in the SPGS Early Start Program, she was the first person I met when I stepped foot on campus. Dr. Woodall helped me get a head start by giving advice about academic life, the various aspects of (the school), and the limitless possibilities I have to pursue a career in government. She will also be there with me on my very last day as an undergraduate student since I have been completing an internship course with her this semester. Along with being a notable academic leader in the ASU community, her kindness, attentiveness and desire to mentor students make her one of the most influential professors I have had from the (school).