Nicole K. Mayberry is a three-time graduate of Arizona State University. An Arizona native and first-generation college student, she received her Bachelor of Science and Master of Arts degrees in political science and now her doctorate in human and social dimension in science and technology from the School for the Future of Innovation in Society in the College of Global Futures. 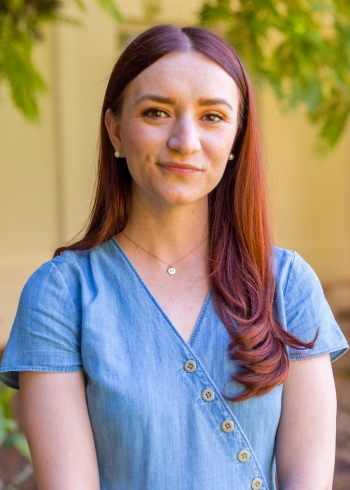 Mayberry worked full time during her first two degrees, dedicating her free time to her coursework. She was prepared for the solitary work of research, but was pleasantly surprised to find a supportive community of scholars and mentors around her.

“In grad school, you feel very isolated. You're told that you are working, especially at a PhD level, on a knowledge contribution that's entirely yours. You will have people around you, but you have to be the one executing the research or collecting the data,” Mayberry said. “I've just been overwhelmed with the amount of community support. And that's been really pleasantly surprising to constantly feel like someone's around and someone's there to be supportive, even if at the end of the day the outputs of my work are mine alone.”

She has served as president of the Graduate Professional Student Association (GPSA), an experience she has found rewarding. Mayberry is proud of the work done by the organization to better serve the students, in partnership with administration and the Undergraduate Student Government, even through challenging times.

Mayberry had an idea of the scope of her research interests entering the program. She also valued an interdisciplinary path forward that supported those interests. Her intent was to examine robots and the relationship between science fiction and society. But two independent studies focused on critical race studies with her co-chair, Rashad Shabazz, associate professor in the School of Social Transformation, shifted that perspective even wider.

“It was at that point that the project really shifted to taking in dimensions of race and anti-Blackness, which is something that I had been skirting around but wasn't fully thinking through,” she said.

Her research now uses the development of robots as a lens to see how popular culture and society are continuing to perpetuate racism, white supremacy and anti-Blackness. It is timely work: More studies show that implicit bias is present in the creation and machine-learning technologies like facial recognition, social media algorithms and AI.

“Essentially, I'm looking at the question of where this idea that if science fiction eventually becomes science, how can science fiction and popular culture be a credible source of evaluation of analysis so we can better understand why is technology performing the way it is?

“I argue that you actually are continuing to remake racist and anti-Black technology without understanding that there's a cultural connection that hasn't been exposed.”

Here she answers some questions about her time at ASU.

Answer: I work with Derrick Anderson. I think I've learned the most professional savviness from this man. He has been a really good mentor on: How do you situate yourself to be taken seriously, long term, as an academic? How do you approach academia in a way that's really smart and present yourself in a way that's professional and decorous at all times? That's been really helpful. I've learned the most patience from Andrew Maynard and also just kindness and an ability to just put other people before yourself. I just feel like the devotion that he has for change and for constantly listening and making time for people is something that I have definitely gained from him.

Q: What was your favorite spot on campus, whether for studying or meeting with friends or spending time thinking about life?

A: My favorite spot is one building over from Wrigley Hall — there's a little orchard way. It's the perfect amount of people watching, but it's quiet and not a lot of students like to sit there. And they're always open.

A: I probably would start an endowment for graduate students to have more money for their stipends. I believe that research universities are really important places to discover or to create meaningful change. And I think graduate students are really important. I feel like starting an endowment to be able to provide the financial support for someone to be fully immersed. I was fortunate that I was fully funded throughout my time in (the School for the Future of Innovation in Society), and that changed the trajectory of my life completely. So to give somebody that sort of gift of being able to say, “You're going to be covered, paycheck-wise. Go work on something meaningful.”

Senior Manager, Communications and Marketing Strategy, School for the Future of Innovation in Society

For the 34th consecutive season, the Sun Devils have punched their ticket to the NCAA Championship and will meet San Diego in the First Round this weekend. ... For the 34th consecutive season, the Sun Devils have punched their ticket to the NCAA Championship and will meet San Diego in the First Round this weekend.