Brandon Sumner took his education 'one day at a time’

The PhD in physics student is making history at ASU

According to the American Institute of Physics, about nine African Americans receive a PhD in physics in the U.S. each year. This year, Brandon Sumner is one of them. 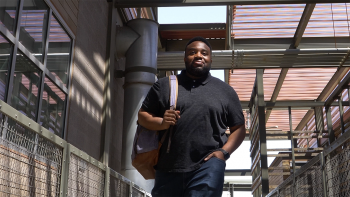 When a mentor approached Sumner and shared that he was “walking Black history,” Sumner was at a loss for words.

Reflecting on that moment, Sumner said, “It is a great honor and it also speaks to this subject in higher education. I don't think I'm good enough to speak on that, but this is obviously a clear indication that this is moving in the right direction. I feel blessed to be able to carry that mantle with me.”

As a PhD candidate at the Arizona State University Department of Physics, Sumner focused his research on assessing the properties of subatomic particles called cascade baryons and analyzing discrepancies in the quantum chromodynamics theory, which Sumner describes as the theory of how things are held together.

In spring 2022, he successfully defended his dissertation, titled "Study of Excited Cascade Baryons and Preliminary Cross-Sections for Ξ(1530) Using Data from the GlueX Experiment." He was also selected as the semester’s outstanding graduate student in the natural sciences.

“Brandon is that great student who demonstrates excellence in his research work and combines this with an awareness of his community and a commitment to make things better,” said Chair of the Department of Physics Patricia Rankin. “I am looking forward to seeing where his career takes him.”

Despite his impressive achievements, Sumner’s journey to becoming a physics scholar was not easy.

“Those landmines are out there,” he said. “When you don't fit the mold, somebody's going to judge you. If you’re not this person, who looks like this, or acts a certain way, and you don’t pass the sniff test, you’ve got to be ready for those bumps. You’ve got to persevere through them,” he said.

Answer: Math was my favorite subject growing up. Coming into high school, I took my first physics class and it didn’t make sense. The math was there with the physics, but it just wasn't coming together. One of the first things you go over in the beginning classical courses is constant velocity and constant acceleration motion, and eventually, with the calculus I'd come to learn and then staring at this stuff for long enough, it made sense.

You know, those train questions you always hear, if you have a train going 20 miles per hour east, how long will it take to cover a certain distance? That was my junior year of high school when I first started coming into that type of stuff. And when that finally made sense, I was like, "oh, this is the type of questions this subject is asking and trying to get the answer from." That was my “aha” moment, and that’s what made me love the subject.

Q: What's something that you've learned during your time at ASU that surprised you or changed your perspective?

A: I was with my mom, probably my freshman year on campus, which would have been around 2013. And I'm seeing all the students around Rural Road, you know, the entire month going up and down. And I'm like, how long are people about to be out here to party, and, you know, we've got work to get done.

And my mom responded, and she was telling me that not everybody mentally was where I was in the sense that I was goal oriented and so focused on what I'm trying to get done here. I can go party every once and a while, but the job is the job, and so, for me that’s the thing I learned was to take people where they are and accept people for who they are when you meet them.

A: It's not always sunshine and rainbows. This pandemic was one of the most stressful things you could do. I'm 25, 26, about to be 27, during the pandemic. If I was to suddenly pass away due to COVID-19, fine by me, but you know, it's my two-year-old that I’m more worried about. He can't get vaccinated. He can’t get any of the mitigation techniques applied to him; he was just too young, so that was a stress.

In my second year, the professor I was working with wasn't working out, and I had just asked my partner to come move in from Texas to stay with me about eight to 10 months earlier. So the stress of feeling like I'm about to flunk out of something that I really, really want, and then I got a kid on the way and a partner that moved here that depends on me to bring home the bacon. So the stress was ramped up, and then six months later COVID hit. It was like a punch after a punch after a punch, so it was not easy, but luckily I have a great family I can lean on.

It's not giving up on yourself, I mean that's what it came down to. I had a professor, who I did undergraduate research with, that I ran into. We started conversing and he gave me another opportunity, and once I had that chance, you're not going to take that opportunity away.

A: Take it one day at a time. I started in WAC 101 when I got on campus. WAC 101 is remedial English, so for people that think I’m some savant of the highest order that, you know, was ordained to be the greatest, that is so far from the case.

If I had looked back 10 years ago and said, “Hey Brandon, you're a senior in high school. You're going to go finish your PhD,” he would have been like, “No, it’s too much.” But when you take it in those small chunks, it is possible to climb that mountain.

A: I got a job lined up for summer to be a liaison for the physics department, to teach high-school-aged minority students through ASU’s Migratory Student Summer Academy. That'll be a fun first-time experience doing something like that that will be well out of my comfort zone.

Then, hopefully in the fall, I put in an application for an NSF fellowship, and hopefully I'll hear back from them soon. If that does work out, that’s what I'll be doing for the foreseeable future.

Sun Devil Lacrosse is the No. 3 seed and opens up the Pac-12 Lacrosse Tournament against Cal on Friday at 7 PM MST. ... Sun Devil Lacrosse is the No. 3 seed and opens up the Pac-12 Lacrosse Tournament against Cal on Friday at 7 PM MST.