The statistics are alarming: Less than 1% of active physicians identify as American Indian or Alaska Natives, and 90% of U.S. medical schools have reported three or fewer such students. 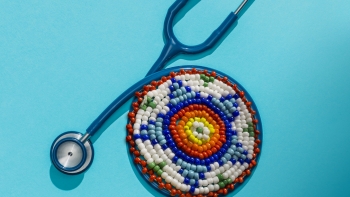 These numbers are problematic for many reasons, but one of the biggest is that research consistently shows race and ethnic similarities between patients and health care providers result in more satisfying care interactions and better health outcomes. Less representation equals worse outcomes.

A group of Native and non-Native scholars from Arizona State University will be exploring this critical issue of underrepresentation through the support of a newly awarded grant under the Robert Wood Johnson Foundation's Community Research for Health Equity program, managed by AcademyHealth.

“We couldn’t be more excited and energized by this prestigious award provided by the Robert Wood Johnson Foundation, as well as the outstanding opportunity to work with partners at AcademyHealth and the Community Research for Health Equity (CRHE),” said Barret Michalec, a co-principal investigator and the director of ASU’s Center for Advancing Interprofessional Practice, Education and Research in the Edson College of Nursing and Health Innovation.

He says while there has been recent attention to the structural barriers and hurdles faced by health profession students from some communities of color, it is essential to explore key factors influencing health workforce development for American Indian and Alaska Native populations in order to address persistent and consistent health inequities.

“Minimal effort has been made to understand the experience of American Indian and Alaskan Native health profession students – especially their experiences within their undergraduate education and training related to the pre-med and BSN pathways,” Michalec said. “What’s more is that it's essential that we start looking at these issues from an interprofessional lens.”

Although some medical and nursing schools have created pipeline programs aimed at increasing the number of American Indian and Alaska Native students, Michalec points out that little is known about how these students experience these programs or about the impact that discriminatory practices and policies, prejudice and racism have on academic and professional success, as well as eventual health outcomes for the communities they serve.

Plus, not everyone has access to these specific pipeline programs.

“In short, these pipeline programs and other diversity-focused programs have yet to move the needle. We believe this is primarily because these programs are working on the students, and not working with the students and their larger communities,” he said.

Fellow co-principal investigator Angela Gonzales is an enrolled citizen of the Hopi Nation and an associate professor in the School of Social Transformation at ASU. A community-engaged scholar, she has worked closely with Indian tribes to develop culturally relevant health promotion and education programs that involve the community in the design and implementation of health interventions.

“A common challenge in many rural communities is the shortage of medical personnel; a problem that is even more severe in remote reservation communities. ASU is uniquely positioned to help address this shortage. Arizona is home to 22 Native tribes, the most of any state, and over a quarter of its land base is designated as Indian reservation land,” Gonzales said.

She says this grant will enable the team to collaborate with tribal partners to help address the health care needs of their communities by identifying and developing effective practices to attract, support and graduate American Indian and Alaska Native students pursuing a career in nursing or other health professions.

“Ultimately, it will not only help to build a more diverse health care workforce, but it will better ensure culturally relevant health care, because these students have a deeper understanding, respect and appreciation for the lifeways of their people,” Gonzales said.

Both Gonzales and Michalec say ASU is well positioned for this work because the university has one of the largest communities of American Indian and Alaska Native students among all colleges and universities.

Currently, of the more than 3,000 American Indian and Alaska Native undergraduate students enrolled at ASU, 618 consider themselves pre-med, and 29 are enrolled in Edson College’s undergraduate nursing program.

“By working together with all stakeholders, we’ll highlight the key factors that impact American Indian and Alaskan Native students’ trajectory towards the medical and nursing professions and identify factors that could encourage, sustain and protect current and future students interested in these professions — not just during undergraduate, but through their graduate-level education and into their professional practice,” Michalec said.

It’s a unique approach and one Michalec says has the potential to significantly impact the health and well-being of tribal communities, by highlighting systemic inequalities in pathways in higher education, and hopefully lend to positive shifts in policy and practice.

While Michalec and Gonzales are the project leads, they are working with an interdisciplinary team of dedicated Native and non-Native scholars from various colleges and roles with ASU.

Along with Michalec and Gonzales, co-investigators on the project include Timian Godfrey, a member of the Navajo Nation, and Richard Montague, PhD candidate and member of the Quechan Indian Nation. Both Godfrey and Montague are leaders within their fields and graduate students in Edson College.

Together, they have outlined a three-year timeline for the project, which officially started on April 15. First up is listening to and amplifying the voices of American Indian and Alaska Native pre-med and undergraduate students.

Support for this research was provided by the Robert Wood Johnson Foundation. The views expressed here do not necessarily reflect the views of the foundation.

Lynette Hrabik, a senior at Arizona State University studying political science and sociology, believes that students looking to enrich their college experience should pursue undergraduate research opportunities.So far during her time with The College of Liberal Arts and Sciences, she’s done just that.With the assistance of a travel grant offered by the School of Politics and Global Studies, Hra...

So far during her time with The College of Liberal Arts and Sciences, she’s done just that. 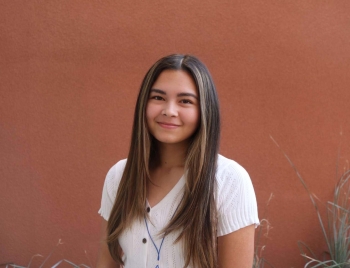 With the assistance of a travel grant offered by the School of Politics and Global Studies, Hrabik traveled to Sacramento, California, to attend the Pacific Sociological Association’s annual conference.

“As a research assistant for the Arizona Youth Identity Project (AZYIP), I also presented some of our preliminary survey and interview findings,” Hrabik said. “My presentation covered Native American young adults’ civic engagement in Arizona during the 2020 elections and COVID-19 pandemic.”

Attending the Pacific Sociological Association’s conference not only provided Hrabik the opportunity to share and receive feedback on her research, but also learn from others.

“Also, as a political science and sociology student, I loved seeing how experts from across the country are applying the concepts I’m learning in their research,” she said.

Hrabik shared some of her experiences from this conference with ASU News:

Question: What were some of your takeaways from this experience?

Answer: There were so many inspiring presentations. One of my takeaways is the value of research in understanding social issues and facilitating change. I was quite moved by one talk on mental health in Filipino communities since I'm Filipina, and this topic is personal for me. While many Filipinos struggle with mental health, seeking help is stigmatized. Mental health service utilization is low — for a variety of reasons. This is a problem since many don’t receive support until it's too late. The presenters discussed how they were interviewing both older and younger generations to heal intergenerational traumas and work towards increasing mental health service utilization. Personally, I think this is a powerful example of how valuable research can be.

Q: How do you think this trip will help you attain your career aspirations?

A: I’m interested in public interest law, becoming a policy analyst or working in public service in some capacity, so the knowledge I gained through this opportunity is indispensable. I also came back more confident in my research abilities and with greater resolve. Whatever path I take, I believe the experience will make me a better researcher and advocate.

Q: What advice would you give those who are interested in a similar experience?

A: When Dr. Angela Gonzales and Dr. Michelle Pasco originally suggested that I could present at a conference, I was hesitant. However, despite being an undergrad, I was surprised by how supportive other conference attendees were. My advice is to not sell yourself short! Pursue research opportunities, even if they seem intimidating, because you’ll learn and grow substantially.