Petty Officer 1st Class Michael Kinzler, a hospital corpsman, completes his bachelor's degree in biochemistry in May through the School of Molecular Science’s online program. 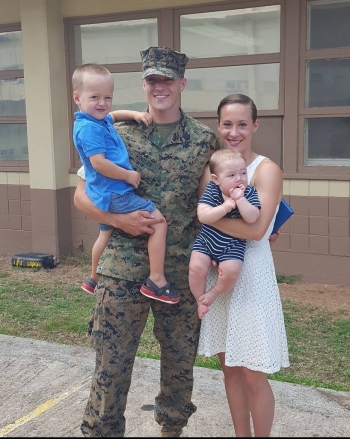 For the past decade he has served in the U.S. Navy, initially at the Naval Hospital Lemoore, in central California. As a junior corpsman he worked in a family and internal medicine clinic with a physician who mentored him, sparking his interest in medicine while providing a strong foundation of knowledge and experience.

Kinzler and his wife, Jess, transferred to Kaneohe Bay, Hawaii, shortly after the birth of their first son. Kinzler joined “America’s Battalion,” the 3rd Battalion, 3rd Marines, as the USMC does not have organic medical units but relies on the Navy to provide them.

“Operating in real-world contingency missions is one of the reasons I joined the Navy, so this was a fulfilling assignment,” Kinzler said. “These experiences solidified my desire to practice medicine at the highest level and encouraged me to take action toward fulfilling this goal.”

Transferring to Nebraska and taking a special assignment to the Omaha Military Entrance Processing Station gave Kinzler a level of stability that allowed him to focus on his studies and complete his degree. After high school, Kinzler had attended a small community college after high school, but lacked direction.

“Although I started out well,” he said. “I quickly lost interest and changed my major three times in an effort to find something that fit me. Ironically, I was taking all online classes when I dropped out and joined the Navy.”

“A friend told me of his positive experiences pursuing a psychology degree online through ASU, and it sounded too good to be true,” Kinzler said. “I was very apprehensive to be taking online classes again, however, once I began it all fell into place. ASU has been a great fit for me to finish my degree while being in the Navy.”

Kinzler, who will be exiting service in June, has been accepted to the University of Nebraska Medical Center, as well as the Medical College of Wisconsin.

“I could not have done anything professionally without the support of my wife, Jess,” Kinzler said.

Kinzler looks forward to starting medical school in the fall with the continued support of his wife and their two sons, Jack and Jordan.

Editor's note: This story is part of a series of profiles of notable spring 2022 graduates.Choosing a career field was never an issue for Samantha Chow.With parents who are both photojournalists for the Arizona Republic and the classes and clubs she participated in dating back to elementary school, it was always clear for Chow that she wanted to be a journalist in some capacity. That early pa... 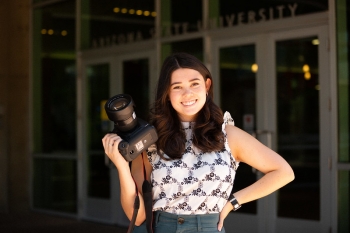 Choosing a career field was never an issue for Samantha Chow.

With parents who are both photojournalists for the Arizona Republic and the classes and clubs she participated in dating back to elementary school, it was always clear for Chow that she wanted to be a journalist in some capacity. That early passion led her to pursue a Bachelor of Arts degree in journalism and mass communication from the Walter Cronkite School of Journalism and Mass Communication.

Now primarily focused on photojournalism, Chow is passionate about telling stories of people that otherwise would not be told.

“One of the things I hope to accomplish through journalism is to get people to care about what matters and to have more humanity and empathy toward certain situations,” she said.

Chow has already published works that reflect this message with her story about Life Masks for Cronkite News, which profiles an artist who creates masks of Holocaust survivors, and her photo story “Views from Quarantine” for The State Press, which highlighted Chow’s experience during a 14-day quarantine and won an SPJ Region 11 Mark of Excellence Award. She has also interned as a photographer with Arizona Highways, Phoenix Magazine and Mesa Public Schools, and is a photographer at ASU Media Relations.

Upon enrolling at ASU, she had obtained scholarships from the Nancy Engebretson Memorial Photojournalism Scholarship, the Arizona Milk Producers, The Drive Smart Contest and earned the New American University Scholar – Provost's Award.

Answer: It’s really silly, but in elementary school, I was part of a broadcast club and I kind of got the vibe I wanted to do journalism then. And I actually first toured the Cronkite School in 2013 because of the broadcast club. So from the age of 11, I knew this is where I wanted to go and I wanted to do journalism. And growing up when both of your parents have the exact same career, it’s hard not to like what they admire and I ended up admiring it myself too.

A: There are a lot of things you can do with a journalism degree that I just didn’t even think about. The skills that you learn communication wise and time management are some of the many skills you learn with a journalism degree that can be applied outside of journalism. So it almost makes me feel more secure because even though I know I want to do photojournalism, I know that I can apply my degree to so many other things.

A: The Cronkite School is one of the best journalism schools in the country. It also was in state for me, so it’s really hard to say no to in-state tuition for a top journalism school. And then my mom is also a Cronkite alum, and she was a big reason why I wanted to come here too.

A: I think my favorite professor that I’ve had so far was my photojournalism professor, Dominic Valente. He always encouraged me to keep trying and never stop shooting. And one of the most important lessons he taught me was how to actually shoot. Anyone can just go out and take photos, but he taught me that you have to get your safety photos first when you get an assignment and you need to get the photo that you know your editor will be satisfied with. Then once you get that, you can go out and get experimental. His biggest piece of advice was to stick around for 10 to 15 minutes after you think you have enough because you always think you have enough. Some of my best photos have come from staying longer like that.

A: My best piece of advice that I could give actually comes from some of the worst advice that I’ve received. I feel like everyone tells you that you need to say yes to everything and take every opportunity that comes your way, and that’s horrible advice. I’ve tried that and you’ll be so miserable and overworked. So I think the best advice I could give is that it’s okay to say no to things in favor of your mental health. Instead, I would say to take every opportunity that you can fit on your plate.

A: I really like that breezeway by the law building with all the tables and stuff. There’s something about it that’s so relaxing because it’s shaded, but so full of light. I think it’s because I eat lunch there a lot and it’s kind of like my escape from school.

A: I’m a part of the three plus one program, so I’ll be back. But this summer, I have a fellowship with the Arizona Republic on the visuals team, so I’ll be doing photo and video for them through the summer and then I’ll also still be working for ASU Media Relations as a photographer. After I get my master’s, I want to stay in Arizona. I’ve been growing up here and I’ve grown to appreciate it and all of my family’s here so ideally I want to stay here.

A: I think at the end of the day, there isn’t enough money in the world to solve some of our biggest issues. Some things I’m really passionate about like homelessness, global warming and misinformation, you could throw money at as much as you want. But it could only do so much. I think it really comes down to humanity and empathy. You can’t really put a price tag on that.