“I knew I was home when I chose to enroll.” 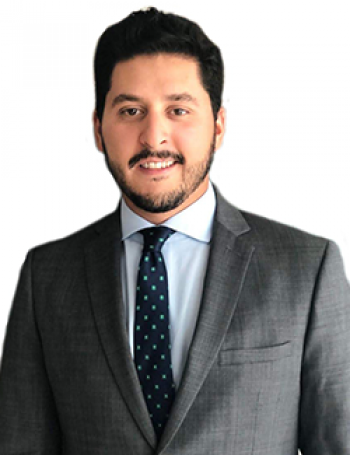 A native of Puerto Peñasco, Sonora, México, Gorozpe Aguilar was searching for an education that offered a global perspective. And — after a work experience serving the Consulate General of Mexico in Phoenix — he knew he wanted to live a life advocating for others.

“This job allowed me to see the world from another perspective. Being close to other people’s problems helped me realize how privileged I’ve been to have a family, health and access to education,” he said. “I told myself that I couldn’t afford to do anything and not contribute to society.”

Gorozpe Aguilar took no time making his goals a reality. Since May 2021, he has been part of the Thunderbird For Good team as a program assistant in DreamBuilder, a unique training program helps women build their dream of starting or growing their own business. This experience helped solidify Gorozpe Aguilar’s plans after graduation to leverage business and technology for good.

“I would love to work at the intersection of technology and social impact,” he said. “Thunderbird teaches with these values at the focus. Using business as a source of good to create prosperity and sustainability worldwide is what I hope to achieve.”

Question: What do you love about being a T-bird?

Answer: I love that the school is very innovative and fully equips us to transcend as human beings and managers across borders. I love being part of this family and how it has given me a sense of identity and belonging to something much greater. Finally, I loved that I have found many great faculty, people, mentors and lifelong friends from multicultural backgrounds.

Q: Regarding our recent grand opening and the 75th-anniversary global reunion, what does it mean to you to have been part of this historic moment in Thunderbird’s history?

A: Being part of the celebrations made me realize how big and real the T-bird family is, and how far we can go as a community. It was amazing to see and hear the commitment of the university to thrive and reach greatness as a business school and as an agent of change. This week was truly an incredible experience.

A: I would like to call them challenges instead of problems because problems have solutions, and while challenges may not have a tangible solution around the corner, we can address them with a different mindset focusing on small actions with big outcomes.

If someone gave me $40 million, I would address the challenge of digital inclusion and the digital literacy gap in emerging markets and underserved communities. I want to empower small and medium enteprises (SMEs) and private-owned businesses through education, technology and digital tools to create more resilient communities and businesses. Technology is here to augment our lives but is powerless if people can’t access it. 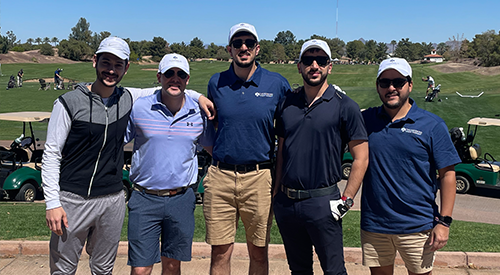 Gorozpe Aguilar with his Global Challenge Lab (GCL) team during their presentation. Thunderbird's GCL program is a capstone course that engages students with global organizations to solve challenges related to growth and impacts. 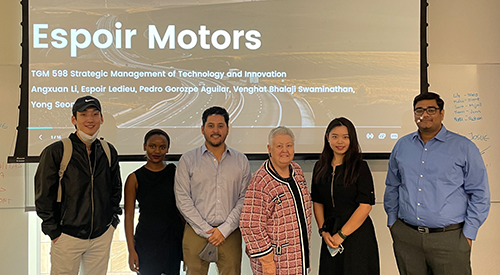 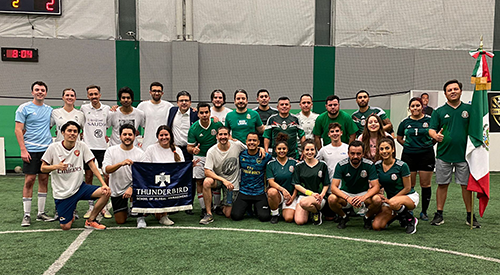 Gorozpe Aguilar participated in the Thunderbird soccer match against the Mexican Consulate.

A: For my family always, God and health. La familia lo es todo.

Editor's note: This story is part of a series of profiles of notable spring 2022 graduates.Fatma Abid never thought she’d study journalism, let alone be honored as an Outstanding Graduate Student at the Walter Cronkite School of Journalism and Mass Communication’s spring 2022 convocation ceremony.Growing up, Abid excelled at math and science. Being from Bangladesh, Abid said many first-ge... “When people see someone like me reading the news, when they see someone in a headscarf, they're kind of forced to confront their own conceptions about people like me. And while it's not comfortable, I think that's a really important thing,” said Cronkite School Outstanding Graduate Student Fatma Abid. Download Full Image

Growing up, Abid excelled at math and science. Being from Bangladesh, Abid said many first-generation South Asian immigrants encourage their children to pursue medical or engineering careers.

When she chose to attend Cronkite, however, Abid was met with overwhelming support, especially from her parents.

“I was really surprised and happy to hear that people in my community were so encouraging of someone like me to represent our community,” Abid said.

She realized her biggest obstacle was herself. Now, as a student graduating with a master’s degree in journalism and mass communication, Abid’s goal is to see more people like her anchoring the news.

“When people see someone like me reading the news, when they see someone in a headscarf, they're kind of forced to confront their own conceptions about people like me. And while it's not comfortable, I think that's a really important thing,” Abid said.

Answer: Aha moments, unfortunately, didn’t come until very recently. It was not until this semester when I was named an anchor for Cronkite News. During the auditions, I was standing in front of the camera and I thought I would be really nervous because there’s a lot of people watching and it’s a lot of pressure. I was reading the teleprompter, and it felt like everything else faded away. I was like, OK, like I was meant to do this. It took away all that uncertainty and doubt. And that was very rewarding. It came really late, but I'm glad that it did come eventually.

Q: What’s something you learned while at Arizona State University — in the classroom or otherwise — that surprised you or changed your perspective?

A: In my JMC 201 class, one of my professors was helping us learn how to write stories. He gave us the example of a woman, like a zookeeper, who died at a zoo from an animal. The details were given, and we were supposed to write a story from that. He said something along the lines of “Don’t write ‘Tragic death at the zoo.’ Tragic implies subjectivity.”

And I just remember being floored, thinking, so this is what journalists do. We don't put our own feelings into work. We try to take the news and share it as truthfully as possible. And I think that was just a moment where I was like, OK, this is what it means to be objective. That's something that stuck with me.

A: My brothers are all currently at ASU. And luckily we were all able to get a scholarship. Journalism was definitely really out of left field for me, but my family and parents, especially my dad, were supportive. They were like, “You're good at writing, and it’s important for our community. Why don't you try journalism?”

A: As Dory says, just keep swimming. When you’re in school, it feels like it’s never-ending. And no matter how much people tell you these are the best years of your life and it’s going to fly by, when you’re in it, you’re really in it. My advice is that if you push through, the finish line is so worth every struggle and uncertainty you have.

A: I would study in the library by myself, whether that was on the Tempe campus at Noble (Library) or downtown in one of the study rooms. There’s something peaceful about being by myself. You’re always around people at college, which is fun, but it’s nice sometimes just to take a moment and step back.

A: Something that's always been important to me is foster care in this country. I've grown up knowing that it’s not a great system. The people are doing their best with the resources they have, but there's so many kids struggling in the system that sometimes fall through it, end up on the streets or just aren't taken care of. Putting money towards it and working with the experts in the field to try to think of innovations for this system is something I’d want to do.

Written by Olivia McCann, brand engagement and communications aide for the Cronkite School