Emily Harding spends a lot of time thinking about cities and how to improve them. 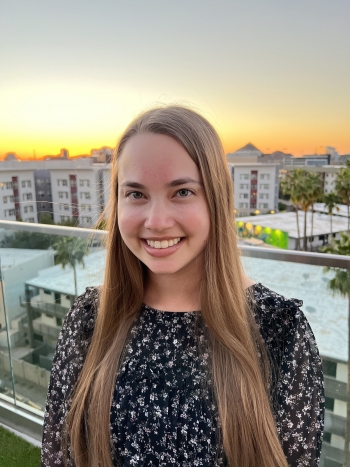 With rapid urbanization comes a host of issues, from the environmental — such as pollution, destruction of surrounding environments and biodiversity loss — to the social, such as affordable housing, inadequate infrastructure and unequal distribution of resources.

These interdependent, complex problems are the type of issues that Harding wants to solve with her dual majors. Harding will graduate this spring with her Bachelor of Science in sustainability from the College of Global Futures’ School of Sustainability and her bachelor’s degree in urban planning from the School of Geographical Sciences and Urban Planning in the College of Liberal Arts and Sciences. She is also a student in Barrett, The Honors College.

“They really go hand in hand,” she says of her two degrees. “There’s no straightforward answer to the problems in urban planning, but I think sustainability — an intersection of science and humanities — best positions me to actually solve them.”

After graduation she plans on attending a master’s program in urban planning and hopes to specialize in sustainability. She’s currently deciding between graduate schools.

Answer: I’ve been interested in the environment since I was a kid, and my dad would take my family out on road trips and camping trips. I knew I wanted to study the environment in some way, so when I started at ASU I became an earth and space exploration major. But I really wanted to delve more into problem-solving the issues facing the environment, so I took a little leap of faith and switched to sustainability. Then, I took a class called Sustainable Cities and it was during the first lecture alone that I learned how important cities are, so I added urban planning as a major as well.

A: I was never too outspoken in classrooms, even though I wanted to share my thoughts. That changed for me after I co-founded and eventually became the president of the ASU badminton club, Sun Devil Birdies. My perspective on myself changed, because I never really ever imagined myself as a leader, speaking in front of everyone. I enjoyed contributing to a community at ASU and meeting people from all over the world, making friends that I would've never made otherwise. It helped me prepare for my Barrett thesis as well — I defended my thesis in an hour-long presentation, which was the ultimate test of public speaking for me. It went smoothly, and even now I find myself seeking new opportunities to challenge myself.

A: Every year in high school I would go to Open Door at ASU, where all of the different fields of study come together and you just walk through campus and get to know about the different majors and clubs. Going to that every year and seeing the wide variety of opportunities was really comforting, because at the time I wasn't sure what exactly I wanted to major in.

Q: Which professors taught you the most important lessons while at ASU?

A: Kailin Kroetz, my thesis director taught me about having a balance. I started working with her on research right after the pandemic started and she encouraged me to take time to rest and recharge. I think that really helped me from burning out and to just have a much better balance in general. Candice Carr Kelman had such a positive mindset when the pandemic happened in the middle of our class. We had a partnership with the city of Peoria that was supposed to be in person, but she quickly adapted it to online work and we needed that resilience and positivity. Scott Cloutier transformed what I even thought of as “sustainability.” I always approached sustainability as solving issues on a global, national or local scale — but he showed me how to focus on individual sustainability. Personal happiness, focusing on your own well-being. That fits in nicely with what I learned from Drs. Kroetz and Carr Kelman as well — part of being personally sustainable is having a good balance and a positive outlook.

A: Embrace change. Know that our paths are not linear and it might not go where you expect. Be proactive about reaching out to professors who might have similar interests to you, even if you're not exactly sure about joining clubs or research opportunities. There are so, so many people who want to support us at ASU.

Q: As someone who’s studied urban planning and sustainability, are there any cities that you think could be a model for more sustainable urban development practices?

A: Rotterdam, in the Netherlands. After it was destroyed in World War II, it was completely rebuilt. But it was rebuilt to be car-dependent, like many cities in the U.S. Now, however, the city is going back and trying to reverse this car dependency. I think that is something that a lot of cities could emulate because they can see it’s possible — Rotterdam is a car-dependent city that’s making positive changes. They are starting to create more public transit options and closing off streets to make them pedestrian-only. All these pedestrian-friendly and bicycle-friendly initiatives are trying to reverse the damage of car dependency and I think that is something that we could strive for.

A: I would try to solve the urban heat disparities in Phoenix. Recent studies show how lower income and minority areas in Phoenix experience temperatures three to five degrees higher than wealthier, white communities. We could spend that money on trying to fix some of those disparities.

Q: What do you think are some of the most pressing issues related to sustainability in urban planning today?

A: The fact that vulnerable communities tend to bear the brunt of the negative consequences of climate change, especially considering they’re not even really responsible for it. They're not the communities with the large carbon footprint. Addressing the inequities in cities is important because so many people are moving to cities and it's only going to get worse unless we do something about it.

Q: If you could change one thing about how urban areas are planned in the U.S., what would it be?

A: I would love for American cities to be less car dependent and instead be more transit-oriented. Not only does it reduce pollution and increase accessibility for people who don't have cars or can't afford cars, but also it connects a city together. Getting people out of their cars creates more random interactions with other people, fosters community and just gives a city more identity and culture.

Editor's note: This story is part of a series of profiles of notable spring 2022 graduates.Ananay Arora has known that he wanted to pursue a career in computer science since he started coding at age 11. In his years as a computer science major in the Ira A. Fulton Schools of Engineering at Arizona State University, many of his successes have been about his time outside of the classroom.One ...

Ananay Arora has known that he wanted to pursue a career in computer science since he started coding at age 11. In his years as a computer science major in the Ira A. Fulton Schools of Engineering at Arizona State University, many of his successes have been about his time outside of the classroom. 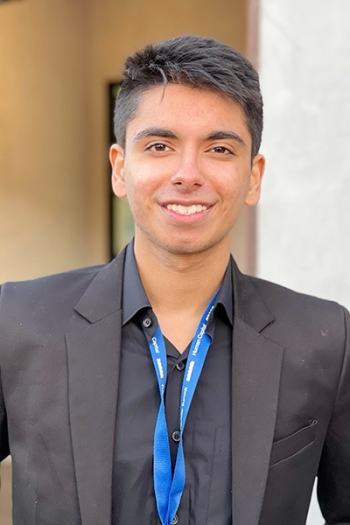 One of those activities that Arora feels is the most important was his founding of the Google Developers Student Club at ASU. The club serves as an additional resource to teach software engineering skills to students.

“Software engineering is a constantly changing industry, and I felt that there is a lot more to be learned outside the classroom,” Arora says. “It took two years of determination and passion to create and grow the club to more than 600 members, and through hands-on workshops every Friday, I accomplished my goal of sharing my knowledge with everyone.”

Arora also has completed two internships with Apple and additionally worked as a researcher in ASU’s Luminosity Lab and in the Laboratory of Security Engineering for Future Computing, known as SEFCOM.

“I’m grateful to have worked as a software engineer and learned from the best engineers in the industry,” says Arora, who hails from New Delhi, India. “Whatever I’ve learned, I’ve made it a personal goal to share it with the community while delivering the best learning experience.”

In the uncertainty of the early stages of the COVID-19 pandemic in April 2020, Arora and some of his friends created a website, called ismyinternshipcancelled.com, that tracked internships that had been canceled due to COVID and the companies that were hiring for remote positions.

“My friends and I created the website for fun, but when we took it seriously to fight fake news around company cancellations, we made a real impact,” Arora says. “We had a bunch of interviews from Bloomberg, NPR, The Atlantic, State Press, and more, but most importantly the CEO of Cloudflare doubled their internship class after seeing our website.”

Arora will be returning as an intern at Apple this summer before coming back to ASU and the Luminosity Lab in the fall to complete his master’s degree in computer science as part of ASU’s accelerated 4+1 program and continue work as a researcher in the School of Computing and Augmented Intelligence, one of the seven Fulton Schools.

“Going forward, I aim to build and ship great products to customers,” Arora says. “I'm already grateful to Apple and Luminosity for giving me those engineering and management skills in order to facilitate that. I aspire to work at a big tech company and also pursue entrepreneurship in the future.”