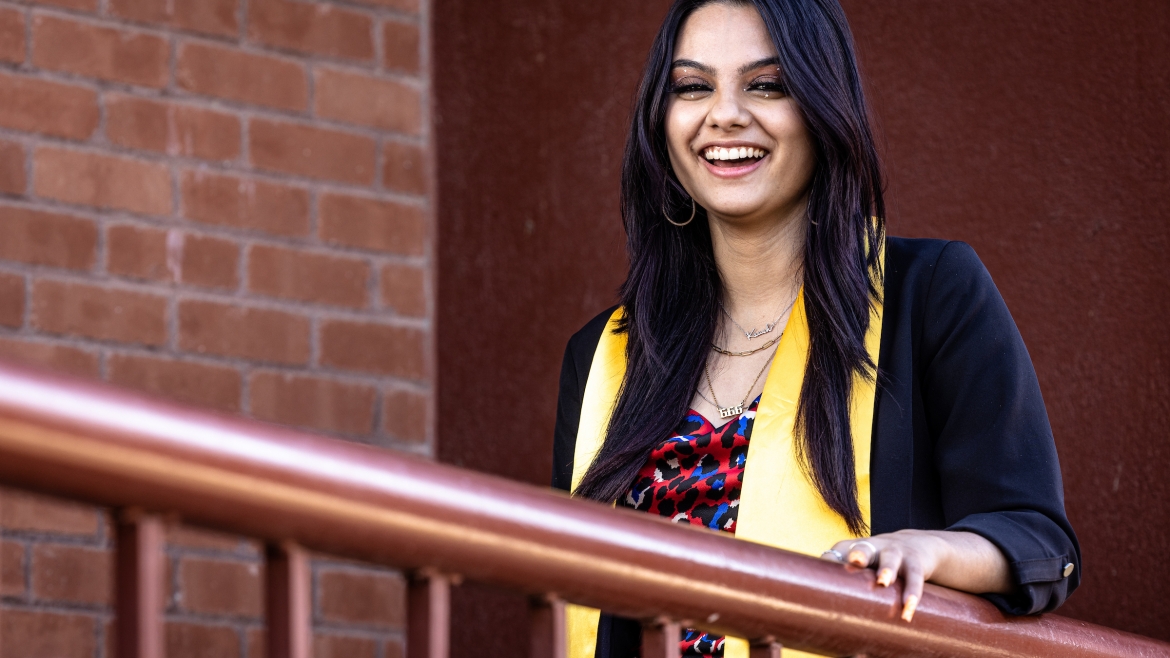 Becoming the person she is today

When Karishma “Krush” Sood grew up in Scottsdale, Arizona, social media was forbidden by her parents out of protective caution. In her senior year of high school they relented and she joined Facebook and Twitter. During her freshman year at Arizona State University she signed up for Snapchat. Sophomore year she joined Instagram.

And now she’s graduating with a bachelor's degree in journalism and mass communication from the Walter Cronkite School of Journalism and Mass Communication, and a double minor in business and digital audiences from the W. P. Carey School of Business.

She’s ready to have a career in social media.

“My mom always calls me her rebellious child,” Sood said. “And I would say that this is probably the ultimate act of rebellion to go work in social media.”

She wanted to get on Instagram when she was 13.

"I honestly think they did it right. I still love social media, but I came about it at the right age instead of too young.”

Sood started out in print journalism, but realized writing was not for her. She thought about dropping out of journalism altogether. She talked to other students who urged her toward public relations.

“I was in the PR research class with Sonia Bovio and there was like a little social media component of that,” Sood said. “And I absolutely loved it. I loved the math involved. I loved the analytics and all that. So I that's kind of how I fell into it.”

Answer: I came into college thinking that college was the only path. I'm Indian. There's a set of standards for my culture. I'm fine with being in college. That's not the issue, but I met a lot of people who are doing great in their lives without college. I think college is still useful, but it's definitely broadened my horizons to realize that not everybody's path is the same. Everybody is going to go through college very differently than I am. Even if we're in the same major, the same classes, all four years, everybody's life is gonna be very, very different from mine. And that really smacked me in the face freshman year.

A: I busted my butt off in high school and expected to go out of state. And then my mom told me that we couldn't afford it unless I got almost a full ride. So I pretty much didn't apply anywhere out of state. And I only applied to ASU. I think I applied to one school. It was like the dream school and I got in. Still couldn't afford it, but I got in. And so I came to ASU actually pretty pissed that I was coming to ASU, but I would definitely say that my mind has been changed since I've been at ASU. I would not be the person I am today if I didn't come here and if I didn't learn the things I did at Cronkite. I don't regret my decision.

A: I feel like I've had so many great professors. I really love Lisa Schmidtke. She's the PR lab director. I'm very much a go, go, go person. Up until the last month or so I've been working two jobs, a full class load, all this stuff. When I was in PR lab she really taught me that it's OK to slow down and not take on a hundred different things. I definitely would say that I go to her usually when I need advice. She's been my favorite professor.

A: I love the Mercado building. I didn't spend like crazy amounts of time there. I was very much an inside my apartment person, but I just think the Mercado is so beautiful. And on the Downtown Phoenix campus it's just really well built. It's usually pretty empty. I like it there.

Editor's note: This story is part of a series of profiles of notable spring 2022 graduates.Since 2001, Jennifer Counter has served in the Air Force, traveled the world as a national security professional and completed two master’s degrees. Despite all she has learned and accomplished throughout her career, she still felt there was something more she could learn.“In my work, mostly abroad,...

Since 2001, Jennifer Counter has served in the Air Force, traveled the world as a national security professional and completed two master’s degrees. Despite all she has learned and accomplished throughout her career, she still felt there was something more she could learn. 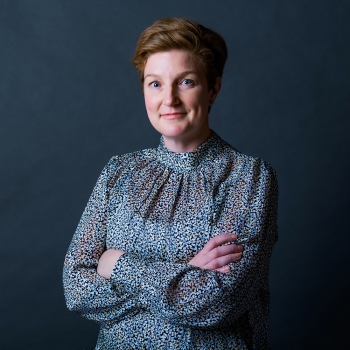 This spring, Jennifer Counter will graduate with her third master’s degree in political psychology from the School of Politics and Global Studies at The College of Liberal Arts and Sciences. Download Full Image

“In my work, mostly abroad, the sort of trying to understand why people make sometimes really terrible, irrational decisions, even at the foreign policy level, was really of interest,” Counter said. “I'm in a position now at work where I have a little bit of downtime each day, so I started looking for programs focusing on politics, psychology and political science. I found the political psychology program at ASU and because it was online, it works really well for me since I spend much of my time in Doha, Qatar. The asynchronous online aspect of the program was really appealing because it could be done from anywhere.”

Counter currently serves as the vice president of Orbis Operations, ​​where she is an on-the-ground adviser to a Middle Eastern military intelligence organization, mentoring mid-level and junior intelligence analysts and leaders with a focus on new technologies to support collection and analysis efforts. In addition, she is a part-time lecturer in the global studies program at Northeastern University and an associate professor in the strategic communications program at Columbia University.

After completing a bachelor’s degree in political science from Boston University in 2001, Counter started her career in the Air Force, where she was an intelligence officer. From there she served in a number of roles including as a political officer in the U.S. Department of State, an independent strategic communications consultant, a program manager for Evince Analytics and the vice president of Ipsos Public Affairs.

While working, she also went on to earn two master’s degrees — one in global diplomacy from the University of London’s School of Oriental and African Studies in 2017 and a second in strategic communication from Columbia University in 2019.

After taking a course in political communication from Columbia University, Counter became interested in learning more about why people hold certain prejudices, beliefs and values.

“I realized that I just had a lot of gaps in the strategy side of communications,” she said. “The strategic communications program at Columbia really opened my eyes, but there were still little gaps. You’d think with two masters I'd be done, but I'm just kind of filling the gaps.”

This spring, she will graduate with her third master’s degree; it's in political psychology from the School of Politics and Global Studies at The College of Liberal Arts and Sciences. Here, Counter shares more about her Sun Devil story and what’s next for her.

Question: What's something that you've learned during your time at ASU that surprised you or changed your perspective?

Answer: The ASU student population, at least in my program, was very diverse — not necessarily in traditional ways, but very diverse in thought. We had folks on far ends of the political spectrum, folks who have lived abroad who have worked in a real variety of different careers, and so that brought very different perspectives and ways of thinking about things into each course.

A: This was my third master’s degree, so I'm probably atypical in that. I had a little bit of an idea of what to expect, and I can probably write a little bit faster than most. But I think the biggest hurdle is always getting over the inertia at the start of a semester to get going. The key to a master's program is getting into the routine. So that first week figuring out what days I’m going to get what things done so that I meet all the deadlines and get into the rhythm. I think that's sort of the biggest challenge.

A: Don't be intimidated by the application process, by the program requirements or by thinking the other students will be somehow better than you. It's all very attainable and the students are by and large going to be just like you. We all have messy lives. Understand that everybody is in the same boat and that there's no harm in applying. Give a class or two a try. If it's the right fit, wonderful. If it's not the right fit, there are other things out there. It's just about getting into that rhythm. Once you're into the rhythm and you're on a schedule, a lot of the noise about how much work you have to do, or how much reading you have to accomplish, or how many writing assignments you have — it sort of fades away.

A: I'll obviously keep working but then also take a little bit of a break and think about if I want to pursue a PhD. Each graduation my parents and sister attend they always joke that this is not my last graduation. So at some point that's probably on my horizon, but that's a huge commitment. It's something I'm interested in, but want to enter into very thoughtfully.

A: I hope to still be working in the international relations or foreign policy space. If that is on the public sector side of things, or if that is on the private sector side of things, I'd be equally as happy. I think public service is really important and something that doesn't get enough respect and consideration anymore. So I always like to keep that public service door open and perhaps continue to teach as I'm able to.