Camp Verde, Arizona, is a relatively rural town that’s mostly known for its McDonald’s, which many people stop at on their way to Sedona. It was also the place where graduating senior Mackenzie King grew up. 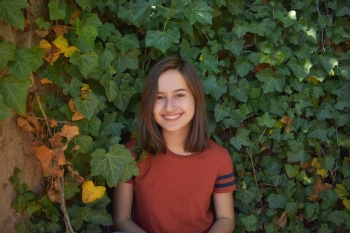 Mackenzie King is graduating with a double major in history and English with a concentration in linguistics and added a minor in German. Download Full Image

“While I would not change having grown up there, it is a place that draws you in and many people get stuck there,” King said. “I always knew that I wanted to see other parts of the world and try living in new places so that I would learn more about the world.”

She wanted to go to college, but wasn’t interested in attending the local community college for that reason. Both of her parents were educators and took her to many college campuses while she was growing up, so she knew moving to a different place for college would be an option.

After attending the Barrett Summer Scholars program at Arizona State University for three summers, King felt like she would be happy at ASU and enrolled. She chose to double major in history and English with a concentration in linguistics and added a minor in German.

“I am so glad I double majored,” King said. “Learning about some of the same things but from different theoretical perspectives has been not only fascinating but has helped me to not get stuck in a rut of only thinking one particular way.”

“If I hadn't participated in undergraduate research I do not know where I would be today,” King said. “It is such a fun feeling to find primary and secondary sources and piece them together like a puzzle. Working closely with faculty on research projects has also been amazing and I have grown so much in seeing how the professional researchers do it.”

King was asked about her experience at ASU and had the following to say:

Answer: I have two "aha" moments. The first was when I was 12 and I was reading this silly, fictionalized diary based on Eleanor of Aquitaine and I realized how much I loved all things medieval — though of course if I were to read the diary now it would probably be riddled with inaccuracies, but it's fiction so it's OK. The second "aha" moment was when I was 15 or 16 and I was watching some historically-inspired tv show with my family and I was trying to pick apart the inaccuracies. That was when I realized that history was more than just a passion but something that I wanted to pursue as a career.

A: Oh my goodness, I have learned so much. One of the biggest things that I learned is just about working with other people effectively. Meeting and working with people who have such vastly different experiences and perspectives than myself has just been very interesting and rewarding. If I were to go over everything that I learned in a classroom this would be far too long.

A: I have learned the most from Professor Calvin Schermerhorn and Professor Hannah Barker. They have just been so helpful and have taught me so much about history, research and so many other things.

A: I'm not sure that my advice would be the best advice to take, but I would say that if you are able, taking classes that pique your interest instead of what you think you "have" to take are definitely worth it.

A: My favorite spot on campus are the lounges in the Barrett dorms. That is where I met many of my close friends and where we played an absurd amount of board games together.

A: I will be attending University of Tennessee in Knoxville to pursue a PhD in history — medieval history in particular.

A: This is a tough question and I would definitely have to think about it in much more depth. My first thought is to provide more funding for fun after-school programs like aviation, art, cooking, etc. at underfunded public schools.

Alessandra Fanali makes it 18 straight years that a Sun Devil has finishd Top-10 in the conference. ... Alessandra Fanali makes it 18 straight years that a Sun Devil has finishd Top-10 in the conference.