After decades of service to the ASU community, Herb and Laura Roskind’s latest gift creates new opportunities for students

Since 1997, husband and wife Herb and Laura Roskind have been a part of the Arizona State University community in myriad ways, having a profound impact on students within The College of Liberal Arts and Sciences and across the university. In recognition of their ongoing commitment to student success, The College dedicated the Great Hall in Armstrong Hall on the Tempe campus in their name on Wednesday evening.

“I really see the Roskind Great Hall being the focal point, the nexus, for all students,” said Laura Roskind. “As they spend their four years as an undergraduate or a graduate student, at some point they do pass through that hall, and I'm hoping that will have great meaning for students, whatever they do in the future, and to sustain a sense of curiosity and learning all through their lives.”

The Roskinds’ long relationship with ASU began when they moved from Massachusetts to Arizona after Herb retired. As they were looking for a way to get involved in their community, the couple decided to take several courses.

From there, they connected with faculty members, and Herb was asked to lend his expertise in global commodity trading to a textbook. This grew into Herb teaching Global Trade in Real Time — a course that emphasizes the role of cultural differences in global trade negotiations — in the School of Politics and Global Studies (SPGS). Herb has now taught the course as a faculty associate for over a decade, but his impact extends far beyond the classroom.

“More than what he teaches students in the classroom — what’s made a tremendous impact to our SPGS students is Herb’s mentorship, which doesn’t end when his course ends,” said Magda Hinojosa, director of the School of Politics and Global Studies. “Ten, 12 years later, he’s still keeping in touch with his former students and providing advice.”

In addition to Herb’s involvement as a faculty member, the Roskinds have been actively involved with a number of university initiatives. They serve on The College Dean’s Council, the Institute of Human Origins' (IHO) research council and executive board, the ASU President's Club and the Cornerstone Society, and are involved with the School of Earth and Space Exploration, the Center for the Study of Religion and Conflict and the Walter Cronkite School of Journalism and Mass Communication.

For over five years, Laura served as an ASU trustee and will soon rejoin as a trustee this August. She also initiated the implementation of several other dean and directors boards across the university, of which she also serves as a member, including for the ASU Art Museum, the School of Politics and Global Studies, the School for the Future of Innovation in Society, and the Herberger Institute for Design and the Arts Dean's Creativity Council. 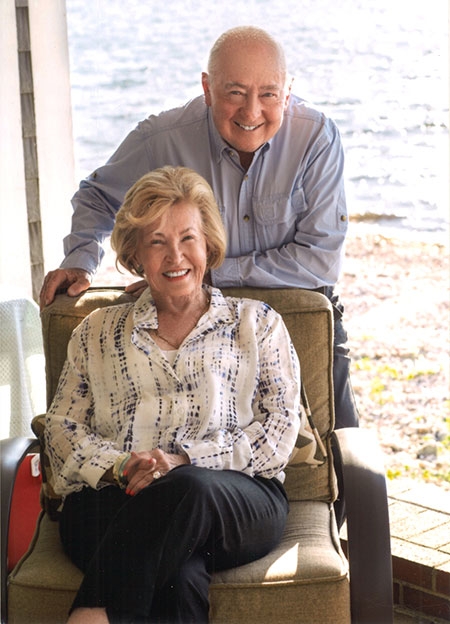 Laura and Herb Roskind have been involved at ASU in myriad ways, from investing in student success programs to both taking and teaching courses. Photo courtesy the Roskinds

“Herb and Laura’s philanthropy and dedication to IHO, including their service as executive board and various committee members, has been really significant to the success of IHO’s faculty research, graduate student training and general operations of the institute,” said Yohannes Haile-Selassie, director of the Institute of Human Origins. “I believe they will do everything possible to make sure that IHO remains the global leader in human origins research. This is their vision, and their vision is IHO’s vision as well.”

The couple has invested in several programs within The College, including the Early Start program, a free, two-week immersion program for first-year students that helps them prepare for the transition to ASU.

Their most recent gift will help to expand the efforts of The College’s Futures Center, with the development of new paid internships and mentorship opportunities for students across The College. In addition, the gift will help to strengthen programming to support students as they prepare to graduate and go into the workforce.

“This gift by Herb and Laura Roskind is allowing us to provide financial support to many students who need financial assistance to make those internships work,” said Patrick Kenney, dean of The College of Liberal Arts and Sciences. “The pathway from the beginning to the end of college is a complete avenue for which The College is working all the time — getting them started well, getting them finished well — we’re happy to name the Great Hall after them.”

Moving forward, the Roskinds are eager to find new ways to offer support to The College and continue advancing access and opportunities for all students.

Top photo: Laura Roskind cuts the ceremonial ribbon at the dedication of the Roskind Great Hall in Armstrong Hall on the Tempe campus on Wednesday evening. Her husband, Herb (right), and Patrick Kenney, dean of The College of Liberal Arts and Sciences, clap behind her. Photo by Max Conacher/The College

Thinking about transit through science fiction

This is what the current U.S. secretary of transportation thinks transit future might look like in 50 years: Flying cars. Drone delivery of packages. Net dividends on energy. Widespread acceptance of electric vehicles. And infrastructure that is more socially equitable.“We have to make decisions that are a bit of a bet on the future, and at the same time, we don’t want to bet the farm on the f... 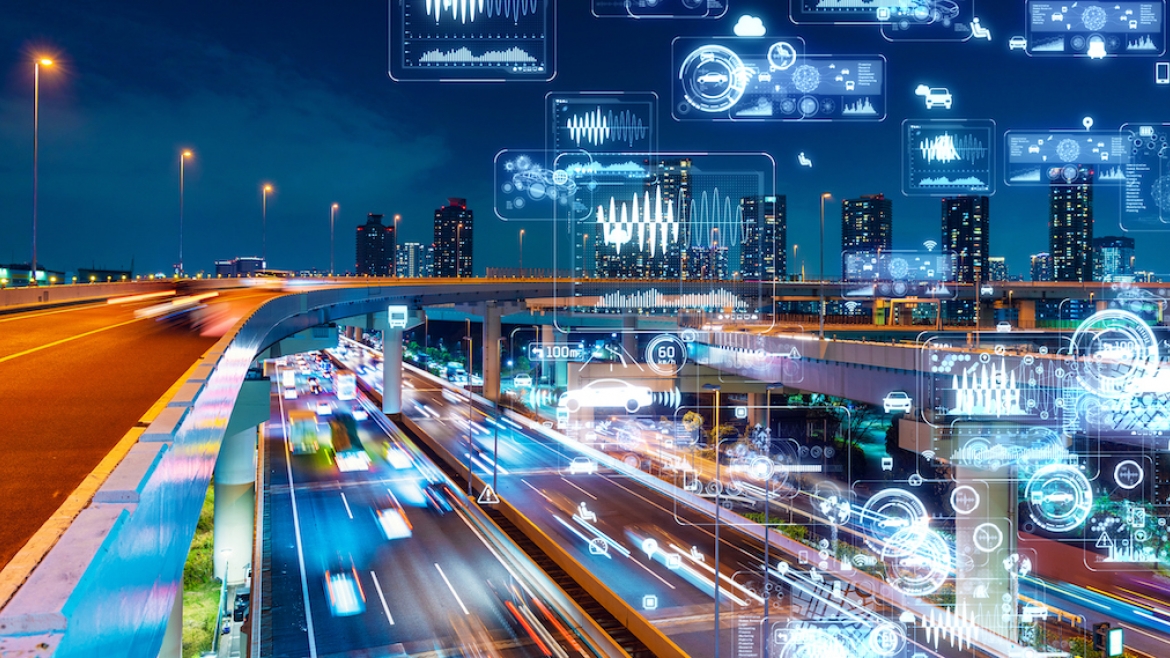 Thinking about transit through science fiction

This is what the current U.S. secretary of transportation thinks transit future might look like in 50 years: Flying cars. Drone delivery of packages. Net dividends on energy. Widespread acceptance of electric vehicles. And infrastructure that is more socially equitable.

“We have to make decisions that are a bit of a bet on the future, and at the same time, we don’t want to bet the farm on the future turning out one way or the other,” Pete Buttigieg said during an Arizona State University livestream event on Wednesday. “So what I spend a lot of time thinking about is how can we deploy our capital in an agile or nimble way so that some of these decisions will make sense, even if we don’t quite know how commuting patterns are going to work in seven years, let alone 50.”

Buttigieg joined ASU’s Future Tense for a conversation about infrastructure and imagination, which was followed by a discussion with three acclaimed science fiction authors — Linda Nagata, Annalee Newitz and Tochi Onyebuchi — about how they see their work inspiring visions of the future. Future Tense is a partnership of ASU, New America and Slate that examines emerging technologies, public policy and society. The goal of Wednesday’s discussion was to ask Buttigieg what role imagination plays in managing a federal department as sprawling and as impactful as the Department of Transportation, which he has headed since Feb. 3, 2021.

New America President Paul Butler moderated the wide-ranging 25-minute conversation with Buttigieg, who touched on transportation policies, priorities and how future mobility might look in a half-century. Buttigieg said he grew up watching “Star Trek” and noted that transportation, technology and imagination appear to be inextricably linked.

“It’s striking how much of our imagination about the future is centered on transportation, at least in terms of the imagery of it, right?” Buttigieg said. “You look at how the establishing shot of a sci-fi show or film, for example, tells you you’re in the future. There’s levitating cars or starships or something like that. … That’s what tells us we’re in the future.” 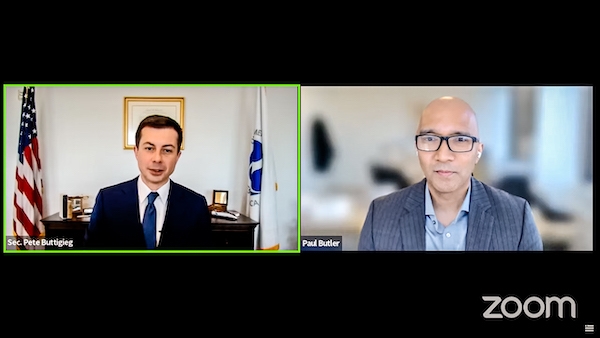 Buttigieg said the most profound technologies that currently affect our lives are not necessarily vehicles or cars, but what what’s onboard these modes of transportation.

“One thing to consider is that in the last decade, I would argue the most important piece of transportation technology was not a vehicle — it was the smartphone,” he said. “The thing that changed transportation for most of us most tangibly was probably the rise of rideshare companies like Uber and Lyft. They were using the same kind of cars that taxis used and that we used to get ourselves around, but the way in which we would summon them changed. And through that, a different labor model emerged, a different means of getting around emerged, with good things and bad things that came out of it. … I think increasingly, you’re seeing automotive companies turning into software companies.”

Buttigieg concluded that America’s current infrastructure is about 150 years old and that President Joe Biden’s $1 trillion infrastructure bill to address those needs will be key to America’s future transit system. And so will smart decision-making.

“We know that we’re going to need resources and hubs where people can come together to access modes of transportation – things like train stations, town squares or transit hubs, airports and ports,” Buttigieg said. “So what we’ve got to do is invest in the things we know we’re going to need no matter what, and then create room for other things to happen that might be very difficult to picture. And the best way to do that is to not think about the asset first, but to think about the people that it’ll affect first.”

Buttigieg’s comments paved the way for a follow-up discussion with three Future Tense Fiction authors, led by Ed Finn, founding director of the Center for Science and the Imagination.

“Fiction has always been dear to my heart because I think it speaks to the heart of what we can do,” Finn said. “The future can inspire real change in the present and can invite people to imagine in detail these different possibilities.”

Transportation is a useful mechanism to transport — so to speak — readers to the future, all three authors agreed.

“It is interesting that we center vehicles so much in our fiction,” said Annalee Newitz, who writes about science, culture and the future. “I’m thinking about my novels, and all of them do start with transit. … But I find that a good way to take readers through the world.”

Newitz, who uses gender-neutral pronouns, said that when they started working on their 2021 book, “Four Lost Cities: A Secret History of the Urban Age,” an architect told them whenever Newitz visited a new city, take transit to the end of the line. They did that when visiting Istanbul, Turkey.

“I had an insane adventure on the train, which I found very valuable,” Newitz said. “It showed me all sorts of social relations. It showed me different neighborhoods. It showed me how well mass transit was maintained, which at that time was not super well.”

“Sometimes the downside is that science fiction can be looked upon as some sort of predictive tool, right? ‘Oh, this is what it’s going to be like in the future,’” said Onyebuchi, a Nigerian American science fiction, fantasy writer and former civil rights lawyer. “Or there will be an evil company in a science fiction novel, and the lesson will be, ‘OK, don’t name your company after this evil company. Don’t be evil.'"

Science fiction should also be hopeful and optimistic whenever possible, Nagata belives.

“I’m at an age now where I’m really over the dystopia,” said Nagata, a Hawaiian-based author of speculative fiction, science fiction and fantasy novels, novellas and short stories. “I would like to still try to imagine that we do have a shot at a decent future.”