World Malaria Day is April 25. According to the World Health Organization, nearly half of the world’s population was at risk of malaria in 2020 — with an estimated 241 million cases and 627,000 deaths worldwide.

While this life-threatening disease is preventable and treatable, and effective measures continue to make a significant impact, emerging resistance to insecticides among mosquitos threatens progress in global malaria control, and increasing our understanding of factors affecting treatment efficacy is essential. 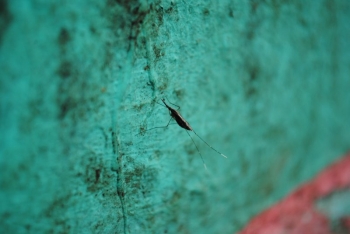 Malaria is spread to people through the bites of infected female Anopheles mosquitoes. Photo courtesy of Krijn Paaijmans

In a new study published this week in PLOS Global Public Health, corresponding author Krijn Paaijmans and his colleagues reveal an all-too-often overlooked factor impacting indoor residual spraying — the likelihood that treated walls are modified by household residents after treatment.

Paaijmans is an assistant professor in the Center for Evolution and Medicine in Arizona State University’s School of Life Sciences, as well as an associate faculty in the Biodesign Center for Immunotherapy, Vaccines and Virotherapy. He joined researchers from around the world to conduct a mechanistic study of malaria vector-control interventions in households in Mozambique.

The study shows that day-to-day household practices and additional construction after in-home insecticide treatments can reduce their effectiveness over time. This new understanding could help regions adjust their vector-control strategies to improve their success rates in the essential, ongoing fight against malaria transmission.

Malaria is a life-threatening disease caused by Plasmodium parasites, which are spread to people through the bites of infected female Anopheles mosquitoes.

An acute febrile illness, the first symptoms of fever, headache and chills usually appear between 10 and 15 days after infection. While they can seem mild at first, untreated infections by the deadliest of the parasites can escalate to severe illness and death within just 24 hours.

Six countries account for more than half of all malaria cases worldwide: Nigeria, the Democratic Republic of the Congo, Uganda, Ivory Coast, Niger and Mozambique.

These methods, especially when combined with improved health care and increased tracking techniques, are highly effective, and although significant reductions have been observed over the past two decades, progress has stalled in recent years.

Experts consider very carefully where, when and how to deploy IRS treatments, to help mitigate the increasing challenge of insecticide resistance and best serve the ongoing goal of decreasing malaria transmission.

However, of the many factors related to indoor residual spraying, one aspect that has not been thoroughly examined is arguably the hardest to predict — simple human behavior.

People living in households frequently take actions that modify the interiors and walls of their homes — washing, painting, re-plastering, adding wall hangings and decorations, and even expanding their households by building entirely new rooms.

"We often overlook an important factor: the acceptability of vector-control interventions by individuals, families or communities,” said Paaijmans. “We currently do not know how common wall modifications are after the implementation of IRS, but if we do not study this behavior in more detail, we will never be able to estimate the true protection that is provided by IRS."

To help gain a better understanding of the impact of these inevitable day-to-day activities and changes, Paaijmans joined researchers from around the world to carefully monitor households in two different Mozambique districts after an IRS treatment was deployed. 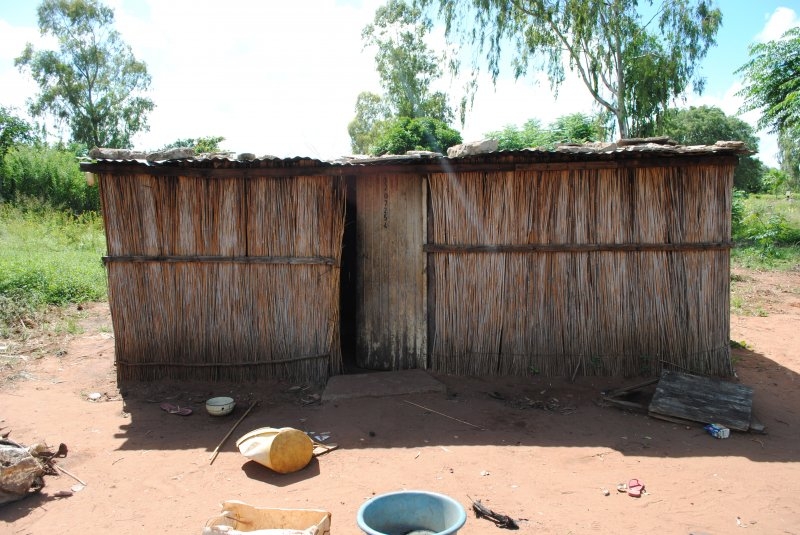 A home in southern Mozambique. 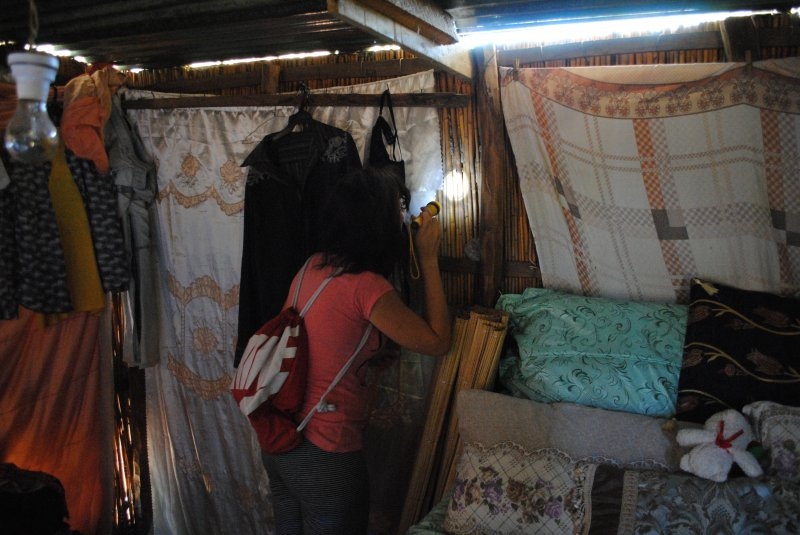 Collecting indoor resting mosquitoes in a home with wall coverings. 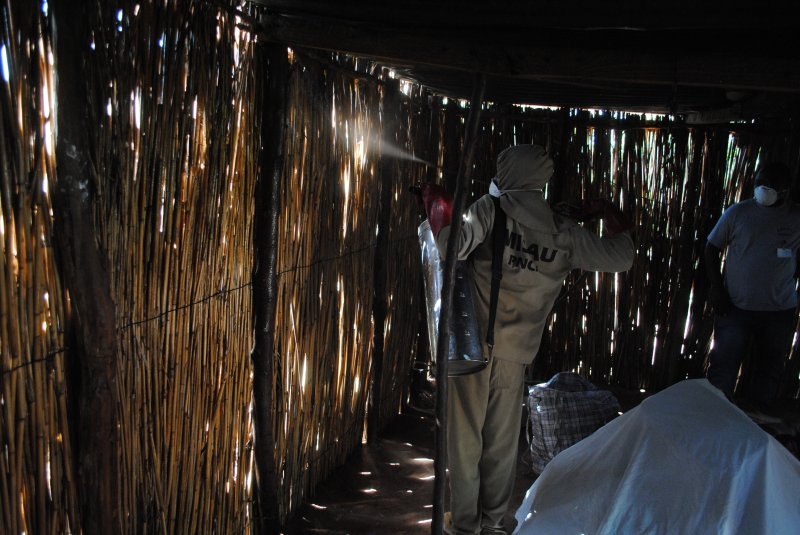 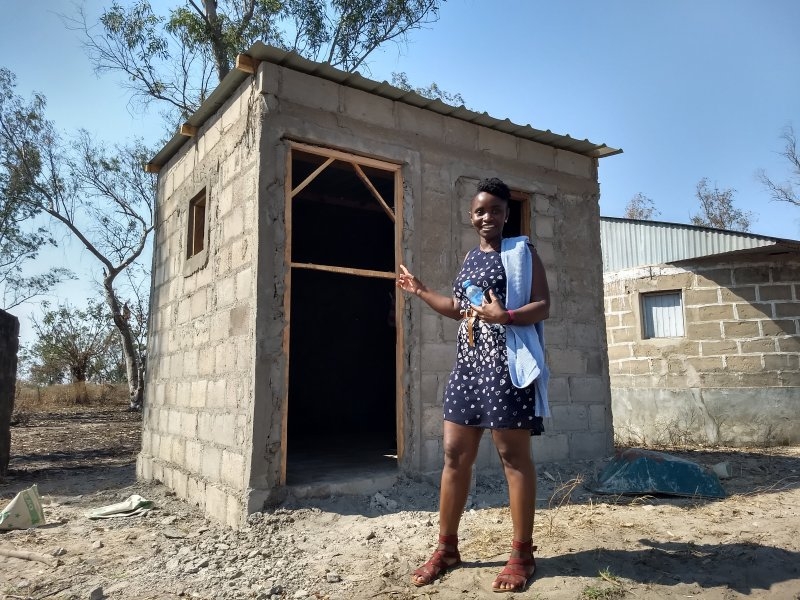 Mercy Opiyo, first author of the study, in front of a new structure being built in southern Mozambique.

Some 590 households in eight sub-villages in Matutuine and Boane districts in Maputo Province, in southern Mozambique, were surveyed for six months after IRS treatment to measure how human activities could change the assumed protection efficacy of IRS across a community over time.

Homeowners and household members answered questions about activities and projects conducted in the homes, modifications to walls and rooms, newly constructed rooms, the use of long-lasting insecticide-treated nets, and their opinions about vector-control tools.

Researchers found that most of the households, about 94%, reported activities that modified their walls. In the modified rooms, at least 25% of the wall surfaces were affected.

Additionally, a total of 99 new rooms were built — 84 in Matutuine and 15 in Boane. New rooms introduce untreated surface areas, posing a clear threat to prevention techniques.

Researchers used the data they collected along with known frameworks and parameters to estimate mosquito activity and intervention strategies to quantify how all of these factors came together in an updated assessment of the protection success rates of IRS treatments.

Based on their findings, Paaijmans and his colleagues estimate that the coverage efficiency of the IRS treatments in Matutuine was significantly reduced — from 97% to only 39%. The Boane district saw a less drastic reduction, from 96% to 91%.

Respectively, these results translate to a 43% and 5.8% increase in daily mosquito bites per person.

The results of this study certainly reflect the wide differences that can be present between communities and countries — each with its own distinctive factors and needs — and as such, these numbers cannot be globally generalized. However, the study results also clearly show the benefit to be gained from considering a wider window surrounding IRS applications.

Current practice when implementing IRS includes monitoring household modifications and activity directly before and after treatments are applied. By applying the new data collected in this study to widen time windows and continue to study human factors in high-risk areas, we can help improve the efficacy of IRS interventions and our ongoing assessment of the results.

The ASU Department of Psychology gathered to celebrate and unveil the naming of the Robert B. Cialdini Social Psychology Laboratories. The event was punctuated with the revealing of an interactive display and plaque that depict Cialdini’s contributions to Arizona State University and to the field of social psychology.Cialdini is an ASU professor emeritus of psychology and marketing and has given...

The ASU Department of Psychology gathered to celebrate and unveil the naming of the Robert B. Cialdini Social Psychology Laboratories. The event was punctuated with the revealing of an interactive display and plaque that depict Cialdini’s contributions to Arizona State University and to the field of social psychology.

Cialdini is an ASU professor emeritus of psychology and marketing and has given 51 years of service to the university. He has spent his entire career researching the science of influence, earning him an international reputation as an expert in the fields of persuasion, compliance and prosocial behavior. Cialdini has published over 200 articles, books and reports, and he is widely known for his book "Influence," a New York Times No. 1 bestseller, now in its third edition with over 5 million copies sold worldwide, and in over 40 languages. 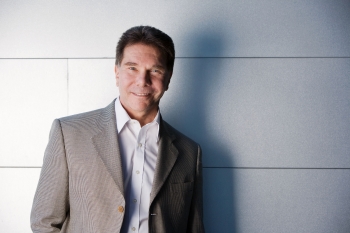 The ASU Department of Psychology gathered to celebrate and unveil the naming of the Robert B. Cialdini Social Psychology Laboratories. The event was punctuated with the revealing of an interactive display and plaque that depict Cialdini’s contributions to ASU and to the field of social psychology. Download Full Image

“Bob Cialdini is unquestionably one of the greatest social psychologists of the last century,” said Katherine Milkman, professor of psychology at the Wharton School at the University of Pennsylvania and No. 1 New York Times bestselling author of “How to Change.”

A video touch display at the unveiling highlighted many of Cialdini’s accomplishments, but also the impact he has had on the current leaders of social psychology and influence, such as Milkman, Angela Duckworth, Adam Grant and Nobel Prize winners Daniel Kahneman and Richard Thaler.

“He is everything that we hope to be as academics and, frankly, as people,” said Noah Goldstein, professor of management and organizations, and Bing ('86) and Alice Liu Yang Endowed Term Chair in Teaching Excellence at the UCLA Anderson School of Business. “When I tell people that Bob Cialdini was my mentor, the most common response I receive is ... ‘Bob Cialdini is my hero.'”

The interactive screen on the display allows students to navigate through the career of Cialdini, both as inspiration and in gratitude for what his legacy enables the department to do. Videos include: “Bob’s Research”; “Ethical Influence”; “Full-Cycle Psychology”; “Bob and ASU”; “The Secret to Bob’s Success”; “Who is Bob Cialdini?” and “Giving Back."

Cialdini’s scientific accomplishments have earned him numerous honors — he has been elected to the National Academy of Sciences and the American Academy of Arts and Sciences; he has earned the highest-level distinguished scientific contribution awards from the Society of Personality and Social Psychology, the Society of Experimental Social Psychology, and the Society for Consumer Psychology; and he has received honorary doctoral degrees from the University of Basel (Switzerland), the University of Social Sciences and Humanities (Poland) and Georgetown University. 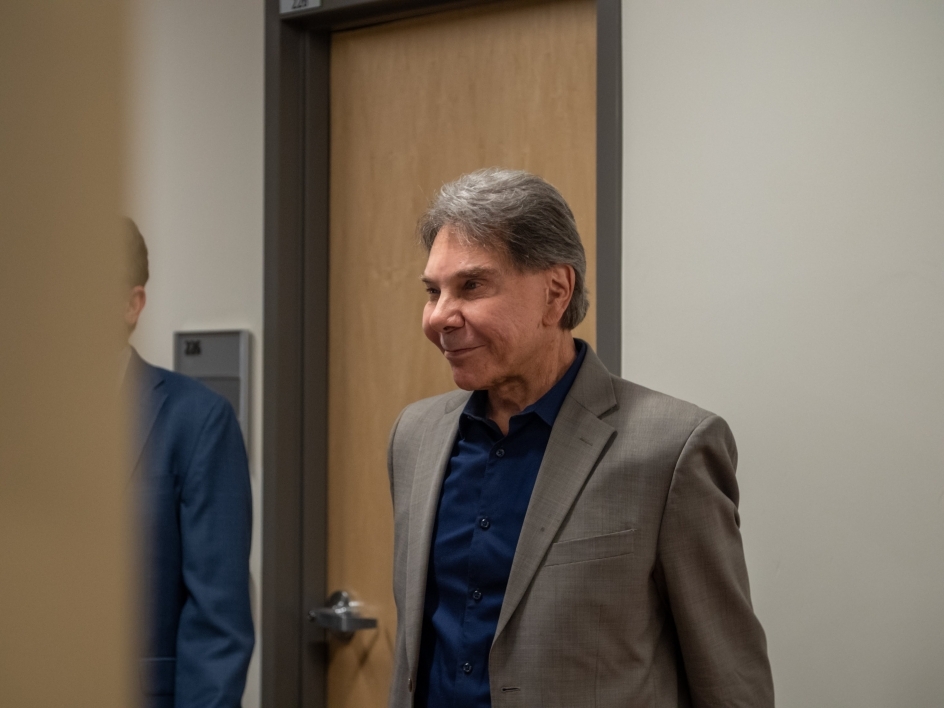 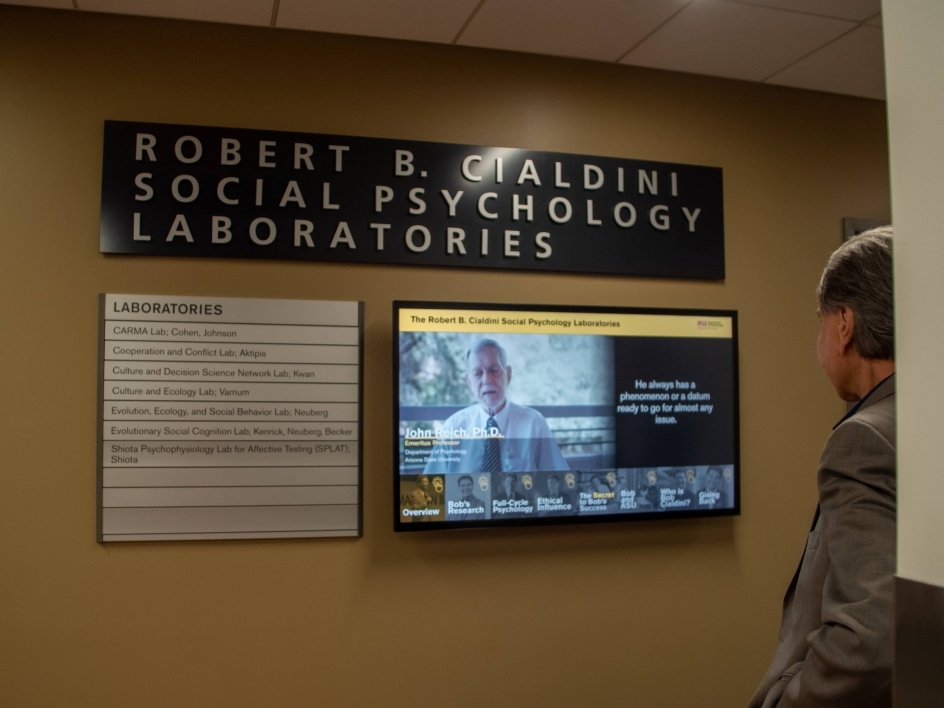 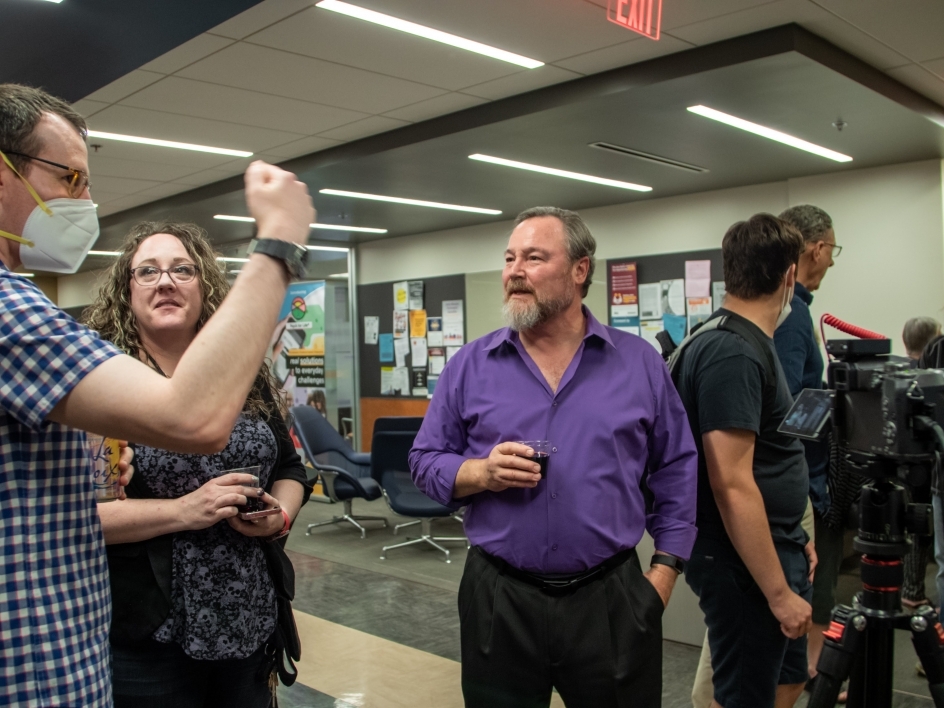 UCLA Anderson School of Business Professor Noah Goldstein speaks with Gregory Neidert, the director of training, consulting and certification for influence at work. Department of Psychology faculty speak with Bob Cialdini at the reception.

“Since arriving on the ASU campus in 1971 as a new assistant professor, Robert Cialdini has been giving to the Department of Psychology — through his ground-breaking research, compelling teaching and mentoring, and generous service to the broader community. Cialdini represents everything ASU social psychology strives to be,” said Steven Neuberg, Foundation Professor of psychology and chair of the ASU Department of Psychology.

The event celebrated Cialdini’s role in pushing the social psychology area forward and also took a look at the future of social psychology and what his support enables the department to do. His generous philanthropic gifts, with his wife, Bobette Gorden, have launched the Psych for Life Initiative, built a Student Success Center within the department, created the Psychology LEAP Forward Fund, and enabled seed funding for student-generated research projects.

Naming the social psychology labs in Cialdini’s honor aims to continue the goal of using full-cycle psychology — bringing studies out into the world and showing people ethical ways to use psychology.

Cialdini was modest in accepting the surprise praise extended his way, making sure that all know his work and success were also made possible by his life partnership with Gorden.

“Bobette’s middle name is Joy – and there is onomatopoeia there. She’s been my helpmate, my teammate, my playmate and my soulmate. I wouldn’t be here without Bobette Joy Gorden,” said Cialdini.

For a recap stream of the event, watch this video.