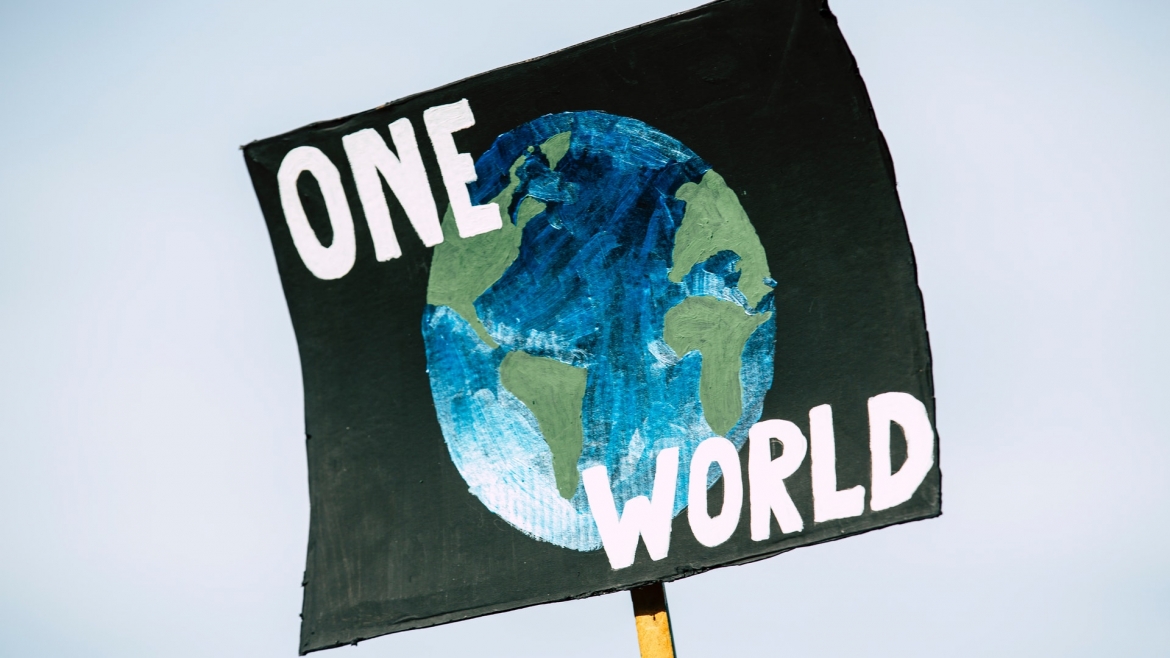 Why this ASU professor is optimistic about climate change

From international governance to local changes, Abigail York shares what it will take to mitigate climate change

Climate change — and the issues surrounding it — can be difficult to understand.

With Earth Day approaching on April 22, ASU News spoke to Abigail York about how governance impacts climate change, the need for local action and international agreements, and the reason to be optimistic about the future.

York, who co-authored a published paper last October regarding climate change, is a professor of governance and public policy and director of graduate studies in the School of Human Evolution and Social Change, as well as co-lead of Earth System Science for the Anthropocene. 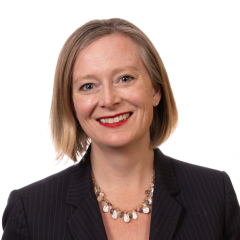 Question: Let’s start with the 30,000-foot question. Where is the world now in addressing climate change?

Answer: That’s a challenging question. There are some things that give me hope. I think there's growing awareness of climate change. Not that long ago, the phrase climate change was something we couldn't even say with certain groups. And today, I would say that's not the case, even amongst communities that perhaps are less willing to make changes. So that, to me, that's like one aspect of hope. Then, also, when I interact with students or the next generation of upcoming academics and scholars and community members, there's a lot of desire to figure out ways that they can affect change. And so, I think that's also something that is really hopeful.

Another aspect of hopeful that I see is that historically, a lot of people have looked for a single solution. They focused on things like international agreements for treaties or agreements on climate goals. And now there's really a growing recognition that there's a lot we can do at many different levels and international is only one piece. There’s a lot we can do as individuals, but more importantly, I would say as communities, as cities, as states, as countries, and international is a piece of that, but just because we don't make as much progress on these international goals, I don't think that means we should just give up.

Q: You mentioned that communities are just now coming around to acknowledge climate change. Will that acknowledgement lead to action?

A: It’s a mixed bag. I see some communities definitely are changing. For instance, in the West, farmers are well aware of what's going on in terms of changing snowpack, in terms of the seasonality changing and increasing heat and drought conditions. Some in those communities may be less supportive of, again, like sort of international agreements or big changes, but they're having to adapt. ... Some of the most exciting things I'm seeing with regard to this is just like who's coming to the table and in new ways. I'm not sure how excited some of the more conventional growers are about these changes, but a lot of these folks see what’s happening with weather patterns, what kind of water deliveries can happen, and they have to change. I don’t know how they feel about it, but there’s changing conversations happening for sure.

Q: Is the younger generation more accepting of climate change, the need to do something about it, and does that give you hope?

A: I really do see big changes, even amongst the students that I would say are much more conservative politically. They’re aware that this is an issue. What the solutions are vary depending on your perspectives, but I think younger generations are aware this is an issue that we need to deal with.

Q: The paper you co-authored last October mentioned the governance difference across the world when it comes to climate change. Can you provide examples of that?

The role of different levels of government varies depending on the place as well as the capacity. Here, we have a fair bit of local capacity. In other places, there isn’t a lot of local capacity in terms of tax dollars or resources. It’s only what’s allocated from a national or regional government on down. One of the things that I think is quite interesting and that we see happening here, as well as in some other locations, is sovereignty being recognized in Indigenous communities and those communities being able to experiment and do some really interesting things.

For instance, with Alaskan Native communities, and here in Arizona too, there’s a lot happening in terms of food sovereignty as being a critical element of climate change, how do you grapple with a changing climate and maintain traditional food, pathways and livelihood strategies? That’s a super important space for governance right now.

A: We try to articulate some of that in the paper, this idea that we may need international agreements for certain things, and I don’t want to say that’s not important, but in my opinion, we’ve been overly fixated on that, and we should recognize all the things that are happening at other levels — both within and outside of government — and try to leverage those and build across communities. And, also, not to force things. This has happened in the past. We’ve forced certain types of policies onto people, and that’s really problematic. We should think about how we can develop capacity in different places to have sort of locally tailored solutions. That would be a much stronger strategy.

Q: It’s interesting to hear you say that because for most of us, when we think about solutions to climate change, we think about international agreements like the Paris Accord.

A: There’s real value in those agreements, but by only focusing on the international, I think we’re missing opportunities for action. When I have students in my classes and they want to do stuff, one of the things I always say is, "Go be active in your local community." There’s a lot that you can do in cities or if you’re from a rural community. You can really make change. Maybe I’m overly optimistic, but I feel like we’re at a point where there may be some big changes soon. For instance, e-bikes and things like that are really beginning to take off. We’re beginning to have infrastructure and places to support electric vehicles for longer trips. I see real opportunity there. So often, the sort of discourse about this is that it’s either the international or it’s the individual. To me, that misses the whole space in between.

Q: Let’s talk about individual action. What can a typical household do to help combat climate change?

A: Some of the big things are changing transportation choices. There have been studies that have shown, for instance, that airplane flights have a ton of emissions. So, just re-thinking travel decisions. Could you change to a vehicle that’s not using fossil fuels? But a household has a lot of power in other spaces, too. They can affect change by going to meetings and engaging in civic spaces. There are certain voices that are being heard, but there’s missed opportunities, particularly at lower levels of government. For instance, making it easier for us to switch to electric vehicles. We need policy changes to do that. It’s not just a household choice.

Q: You said you were hopeful with regard to some of the conversations taking place. Where do you think the world is in 50 years, in terms of climate change?

A: I’m very hopeful that we will make some of these really big changes that have to happen. But there are going to be some tough choices. We just collectively need to do it. So, in a sort of best-case scenario, we work together.

Part of that is getting more diverse voices that are heard and changing how we do our science. We’re trying to do that here at ASU. But we just need to keep doing it and building on it and bringing in new voices and new ideas, training our students to go out into the world and do some of these things.

Editor's note: This story is part of a series of profiles of notable spring 2022 graduates.After the birth of her child, Kari Barber said she was struggling with postpartum depression to a point where, “the only thing that made me feel better was my dog.”The comfort and support that her dog, Bentley, provided led her to apply for a job as a part-time animal care technician for dogs at the...

Five years later, she is receiving degree in nonprofit leadership and management

After the birth of her child, Kari Barber said she was struggling with postpartum depression to a point where, “the only thing that made me feel better was my dog.” 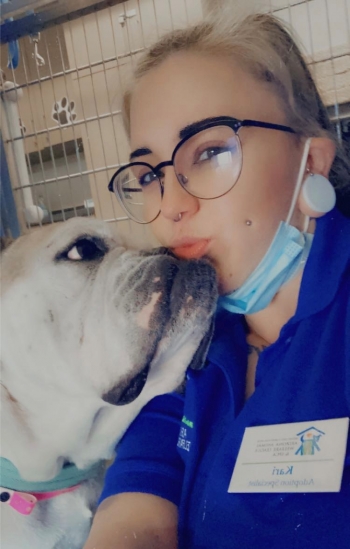 The comfort and support that her dog, Bentley, provided led her to apply for a job as a part-time animal care technician for dogs at the Arizona Animal Welfare League, where she fed, walked, cleaned and cared for the dogs in its care.

While there, she decided she wanted to study nonprofit leadership and management to learn more about running a shelter. Now, Barber is graduating in May 2022 with a Bachelor of Science in that field, with a minor in criminology and criminal justice. She has worked at AAWL for more than five years.

“I have since moved up to medical animal care technician, animal transport, adoption counselor, and now an administrative assistant,” Barber said. “I decided I wanted to go to school to study nonprofits while working in these positions to be able to move up the ladder into a leadership or administrative role. I have helped over 600 dogs find their forever homes.”

Read on to learn more about Barber’s ASU journey:

Question: Tell us a little about yourself. Where are you from?

Answer: I was raised in the mountains of Wyoming with my mom and two older brothers. I moved to Phoenix about 10 years ago to start a new life with more opportunities. I have been working in animal welfare for over five years and I am hoping to use my degree to help run a nonprofit in animal welfare or within juvenile rehabilitation.

Q. Which professor(s) taught you the most important lesson while at ASU?

A. There were two professors who each taught me a lesson that stayed with me the moment it was taught. The first was Jess Amato’s lesson on emotional intelligence in my sustainable community class. The second was Gordon Shockley’s lesson on social entrepreneurs in my social entrepreneurship class. I knew nothing about either going in and since I’ve been able to apply each of them to my everyday life.

Q. What’s the most important thing you’ve learned at ASU – about yourself, about what you’re studying, anything – that came to you as a complete surprise?

A.The most important thing that I have learned at ASU about myself is how resilient I am. I completed my degree while I was overcoming my depression. I had a baby, I continued through the pandemic and was struggling through the difficult time of losing my father, which happened recently. All of these challenges are things that can hinder success in school. I have overcome them all while maintaining a high GPA, making the Dean’s list four semesters in a row, working a job and being a mom.

Q. If someone gave you $40 million to solve one problem on our planet, what would you tackle?

A. Hard question. I think I would tackle housing/homelessness or the hunger crisis. I believe all children should have a roof over their heads and food in their stomachs.

Q. What is something you think would surprise people to learn about you?

A. That I am ambidextrous.

Q. What’s your life motto in one sentence?

A. Be better than you were yesterday.