Deliang Fan has nothing less than bold expectations for his endeavors to expand the capabilities of computing systems and technologies. His far-reaching aspirations involve designing advanced computational hardware to help innovate in some of the most technologically complex areas of engineering and science. 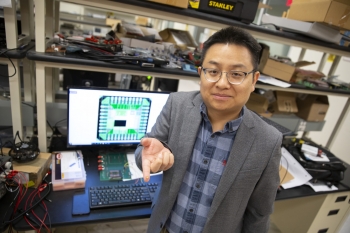 Fan, an electrical and computer engineer and assistant professor in the Ira A. Fulton Schools of Engineering  at Arizona State University, says his ultimate goal is to “design, implement and conduct the experimentation to validate the performance of a new hybrid in-memory computing system.”

In-memory computing is a way of running computer calculations entirely in computer memory. For example, random-access memory, or RAM, is short-term memory where data is stored as needed by a computer’s processor.

“The key concept is to leverage the memory device or circuit properties to implement logic functions within a memory array to directly process stored data,” Fan says, “and to do this without moving data to a separate central logic unit, thus minimizing energy-dominating data communication.”

Based on his progress so far, the National Science Foundation, or NSF, is convinced Fan is prepared to take on these formidable challenges. He was recently given a 2022 NSF CAREER Award that will provide $500,000 over five years to fund his research.

The CAREER Award program supports university faculty members early in their careers who are deemed to have the potential to excel in both research and education, to serve as role models in their academic departments and to lead advances in fields in which progress will serve national interests and priorities.

Fan’s Efficient, Secure, and Intelligent Computing Laboratory team is attempting to build “a revolutionary and ultra-efficient ‘AI-in-memory’ computing system that could execute AI computation directly within the memory where the data is stored, without the massive data movement,” says Fan, who teaches in the School of Electrical, Computer and Energy Engineering, one of the seven Fulton Schools.

If the project is successful, it will provide a new kind of in-memory computing architecture that will operate faster and be a hundred times more energy efficient than current state-of-the-art central processing units or graphics processing units.

“This tiny but powerful computing system will bring computing solutions to the existing smart Internet of Things technologies, robots, self-driving cars, smart-connected health technologies, on-device learning capability and many other things,” Fans says. “It will provide a much cheaper, faster and low-power AI computing platform.”

The project will include extensive educational components. Fan plans to recruit both undergraduate and graduate students to participate in conducting research for the project.

More educational efforts will be made through multiple K–12 STEM outreach programs designed to help younger students learn the basics about computer engineering and AI fields.

In addition, a new course in the growing area of in-memory computing is being developed, with plans to offer the course in the School of Electrical, Computer and Energy Engineering.

Former Vice President Al Gore said Tuesday night that the “media ecosystem,” fossil fuel companies and their backers, and the hyperpartisan nature of today’s political scene are responsible for the “existential threat” of climate change.“The cause of the problem is using our atmosphere as an open sewer,” Gore said. “Those who want to offset the cost of their pollution by just spewi... 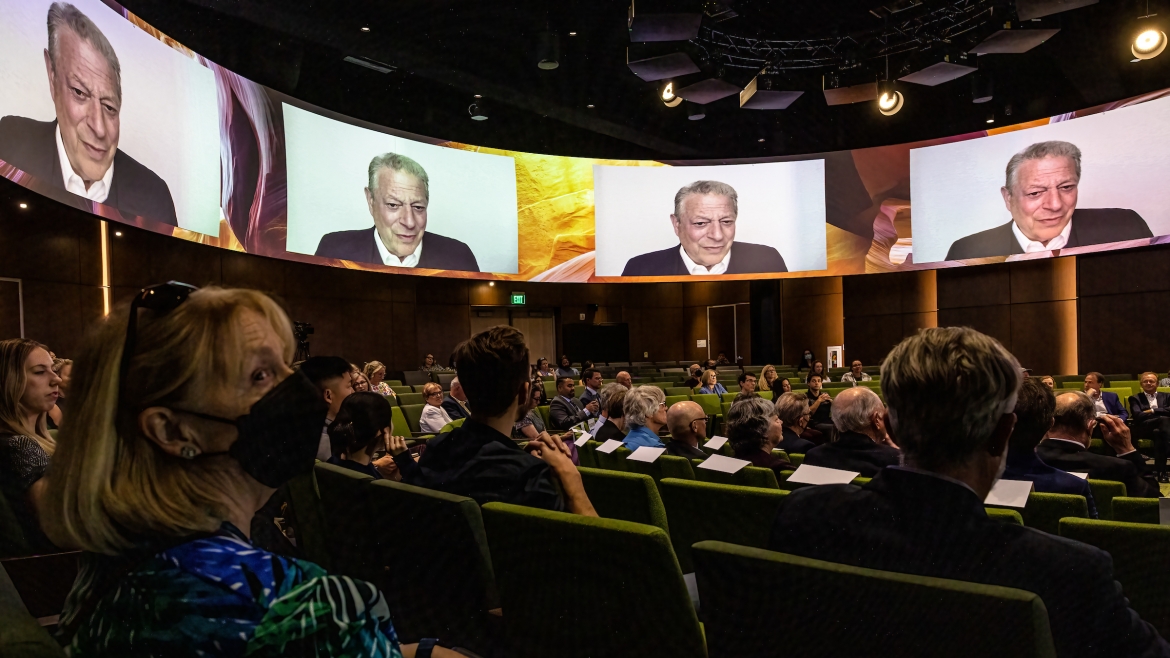 Former Vice President Al Gore said Tuesday night that the “media ecosystem,” fossil fuel companies and their backers, and the hyperpartisan nature of today’s political scene are responsible for the “existential threat” of climate change.

“The cause of the problem is using our atmosphere as an open sewer,” Gore said. “Those who want to offset the cost of their pollution by just spewing it for free into the sky that we all share and in the process is destroying humanity’s future … that has simply got to stop. It’s insane.”

Gore made his remarks in a virtual address that was part of the 2022 Democracy and Climate Change Conference, put on by Arizona State University’s The College of Liberal Arts and Sciences during Earth Week.

The title of the address was "How Do Threats to Democracy Impact Climate Policy?"

“We are allowing democracy to be held hostage by our suicidal reliance on energy resources controlled by murderous autocrats,” Gore said. “This moment in time marked by the invasion of Ukraine should be and still could be an epiphany for our global civilization.

“It's time to change. It's not a time for moral cowardice and reckless indifference to the future of humanity. We cannot allow fossil fuel companies and their allies to cynically use this conflict as an opportunity to move us backward in the transition toward a clean and sustainable future.”

Before Gore spoke, ASU President Michael Crow said that universities have been one of the five most important institutions that have failed society relative to climate change, but that ASU is committed — as evidenced by its Julie Ann Wrigley Global Futures Laboratory — to being part of the solution rather than part of the problem.

“We’re taking on this task of how do we build a better democracy, a better platform, a better decision-making set of mechanisms, a better set of theories and philosophies and tools and assets to really help us take on this assignment of how are we going to make it in terms of our relationship with the planet?” he said.

Gore spent the first few minutes of his speech, which was broadcast into ASU’s new Rob and Melani Walton Center for Planetary Health, sharing facts about climate change’s impact on the Earth. Among them:

Gore said the flow of climate refugees has “awakened xenophobia” in some developed nations, including the United States.

“As immigrants from Latin America and principally Central America, which is one of the most vulnerable regions to the climate crisis, trek north because the extreme temperature and ongoing droughts are ruining crops and destroying livelihoods, families are making harrowing journeys to the borders of the United States only to be villainized and used as scapegoats for our country’s problems when they arrive at the border.”

Currently, 86% of the state of Arizona is in drought, including nearly 60% in severe drought. For the first time, water supply from the Colorado River is being cut due to ongoing water shortages connected to the heat and the drought.

“That means mandatory cutbacks this year for Arizona farmers, some by as much as 60%,” Gore said.

“We are in the early stages of a revolution that has the potential to completely reshape the world for the better, by transforming our relationship to businesses, the environment and to one another,” he said.

But, Gore added, the solutions needed to sustain the revolution have not been deployed at the speed and scale necessary because of the “influence of money in politics and the evolution of our media ecosystem that have led to the degradation of our system of democracy.”

Gore said fossil fuel companies have spent more than $1 billion to “capture and control policymaking process in key countries and to cynically lie to publics around the world about the climate crisis.”

By influencing both governments and media and, in particular, social media, Gore said, fossil fuel companies have created a climate change countermovement.

“They have found these kinds of strategies to be so effective that they have relied on them very heavily to overturn what the truth is and to replace it with a false vision of their own creation that leads to policies that are friendly to their bottom line,” he said.

“They have helped to foster a culture of denial doubt and extreme hyperpartisanship, one where instead of looking first at the evidence and then deciding which political position matches up with that evidence, we begin with our political identity first and then which so-called evidence our political tribe supports.”

“It’s not a new tactic,” he said. “The manipulation of the media ecosystem and of systems of education has been used throughout human history to undermine the will of the people.”

The difference now, Gore said, is the volume of information available and its consequences.

“We live in a culture of mass extraction where people don't feel as though they have the time to participate in their democracy and are overwhelmed by the amount of trivial information designed to capture their attention and to activate parts of the brain other than our reasoning capacity presented to them day in and day out,” he said.

“And when average citizens disengage from the process of democracy, moneyed interests are quick to step in and fill that void. When it comes to the climate crisis, the fossil fuel industry has been able to pour enormous amounts of money into this messy media ecosystem and into our governmental operations, to the detriment, not only of our democracy, but to the lives and livelihoods of people around the world. They have introduced confusion and doubt into the minds of the public, as well as our political leaders.”

Gore ended his remarks by saying there is still hope.

“I know that it's easy to feel a sense of despair and anxiety at times in the face of all the news about the future of our democracy and our planet,” he said. “We have the solutions we need right now to take action, to reduce emissions, transition to cleaner energy, improve lives in communities around the world, and clean up the air and the water and the land. And the good news further is that we can be successful in this fight.