ASU No. 3 contributing school to Teach for America last year

For the sixth consecutive year, Arizona State University was ranked a top producer of educators by Teach for America, the nonprofit that trains and recruits recent college graduates to teach for two years in high-need schools all over the United States.

For the 2021 Teach for America corps, ASU ranked No. 3 among contributing schools with large student bodies; 40 Sun Devils are among the 2,237 educators who joined TFA last year, representing 546 colleges. The 2021 corps was among the most diverse in the organization’s history: Nearly half identify as people of color, 55% are from low-income backgrounds and one in three are first-generation college students. Being selected as a Teach for America corps member is highly selective and involves a weekslong process of interviewing, teaching a sample lesson and preparing an activity aimed at eliminating discipline disparities across racial groups.

Krishnaa Pradhan, a recruiter for Teach for America, said Sun Devils and corps members deeply understand the value of educational equity and access.

“ASU students are dedicated to equity for underserved communities in and beyond the classroom, making an impact through Teach For America’s network of changemakers in every field. We are proud to have Sun Devils represented in the top contributing schools for TFA this year and in many to come,” Pradhan said.

Nathan Martinez Rubio, a 2022 corps member, and a health care compliance and regulations senior at ASU, knows firsthand the impact that Teach for America can have on students.

“I have seen TFA in action. I have had over 10 teachers during my elementary and middle school years who were in the TFA corps,” he said. “It is truly incredible how a passionate leader is able to inspire and change the trajectory of their students despite not initially planning on becoming a teacher. It is a life-changing experience for both the corps members and their students, and I am living proof that that is the case.”

Martinez, who grew up in Phoenix, will be teaching middle school science in his hometown this fall. He said he’s looking forward to both sharing his passion for the subject and building skills for his career.

Having been a campus ambassador for Teach for America for the past three years, Martinez is well versed in the process and encourages other Sun Devils to apply.

2022 spring ASU graduate Ariana Afshari, who is earning her bachelor's degree in neurobiology and plans to become a physician, is headed to the Bay Area to teach high school biology as a corps member this fall. Afshari said her experience working virtually as a Teach For America IGNITE Fellow during COVID-19 reminded her of the stark reality of how socioeconomic status can affect educational opportunity.

“My desire to become an advocate for children through Teach For America comes from my childhood, where I owe so much to educators,” Afshari said. “It was at school, learning and leading, that I never felt displaced and eventually became a place of warmth and security for me. Academic life substituted for a suitable home life. I have a calling to reciprocate the mentorship that I had received in school.”

Afshari encourages Sun Devils of all disciplines to apply if they’re committed to fighting for educational equity for children, because the selective and rigorous program will allow you to give back and to learn valuable career lessons while surrounding yourself with talented colleagues.

“What makes a good doctor a great doctor is their ability to communicate effectively with patients; it requires a skill that you can’t find in a textbook, but you can master in the heart of a classroom: empathy,” she said. “Serving low-income communities as a teacher will build understanding of providing culturally competent care and how to offer empathy-driven means of communication that will ultimately make me a better physician.”

Contact an ASU recruiter now to find out when you can apply.

On Wednesday, April 13, the ASU Alumni Association honored 160 current and former student government leaders at its annual Affinity Reunion. For the first time since 2020, Arizona State University alumni reconnected with past friends and colleagues from their time in student government, and new generations of Sun Devils met and networked with their predecessors.Each year, the ASU Alumni Associatio...

On Wednesday, April 13, the ASU Alumni Association honored 160 current and former student government leaders at its annual Affinity Reunion. For the first time since 2020, Arizona State University alumni reconnected with past friends and colleagues from their time in student government, and new generations of Sun Devils met and networked with their predecessors.

Each year, the ASU Alumni Association hosts a reunion for a different school, organization, club or academic affiliation. This year’s event brought together an impressive array of student government leaders who continued to be innovators and changemakers after graduation. 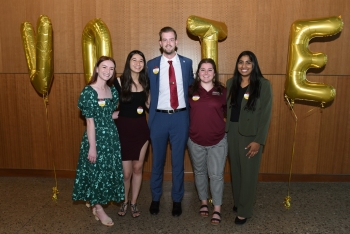 As alumni, faculty and student leaders arrived at the Student Pavillion building on the Tempe campus, there was a sense of excitement to finally be back together again. It was the first chance that many student government leaders had to gather in-person since the pandemic shifted most meetings and events to virtual platforms.

Attendees posed for photos with Sparky, enjoyed refreshments, exchanged business cards and voted in a special election that asked ASU-related questions, like, "Do you prefer the pitchfork or Sparky?" and "Maroon or gold?"

One of the guests in attendance was Jerry Harris, who served as the Associated Men’s student treasurer in 1957.

The 83-year-old said, “Coming out here makes me feel young.”

ASU President Michael Crow, who served as a student senator during his college years, kicked off the event with a speech that highlighted ASU’s history, its evolution into the “New American University” and the many ways the university plans to continue to grow.

“I have been involved in looking at universities and colleges all around the world, and I will guarantee you that this is one of the greatest universities that human beings have ever constructed,” Crow said.

In his speech, Crow boasted about the ASU faculty’s dedication to student success, the institution's impact on Arizona, increased graduation rates and diversity within the student population, and the groundbreaking research that puts ASU on the cusp of overtaking MIT as a research university.

He emphasized the importance of “the underlying culture of openness in the student body” that makes it possible to solve almost any problem.

Next, Christine Wilkinson, the ASU Alumni Association president and CEO, took a moment to recognize some of the guests in attendance, including former mayors Neil Giuliano and Boyd Dunn, former student regents and administrators, the deans of students of all four ASU campuses, and the 15 committee members who assisted in the planning of the event.

In an interview before the event, Guiliano said his experience as the 1982 USG president prepared him for his role as Tempe mayor.

“It totally prepared me for dealing with a wide range of people, and talking ideas and policy and things you want to get accomplished with other people, because you don't do anything by yourself,” he said.

After his time as mayor, Giuliano served as the CEO of the Gay and Lesbian Alliance Against Defamation (GLAAD), a non-government media organization that advocates for LGBT acceptance, and fights against defamation in the media.

“When you're involved in something like student government, you learn how to articulate your views,” Giuliano said. “You learn how to communicate with a wide variety of people. And a national advocacy organization does the same thing every day. For me, it was LGBT issues, but it's the same for any issue.”

As for the future of ASU, Giuliano hopes to see “more excellence,” which he said means earning a degree, being employed in your field of interest, contributing to society and giving back to the university as an alumnus. 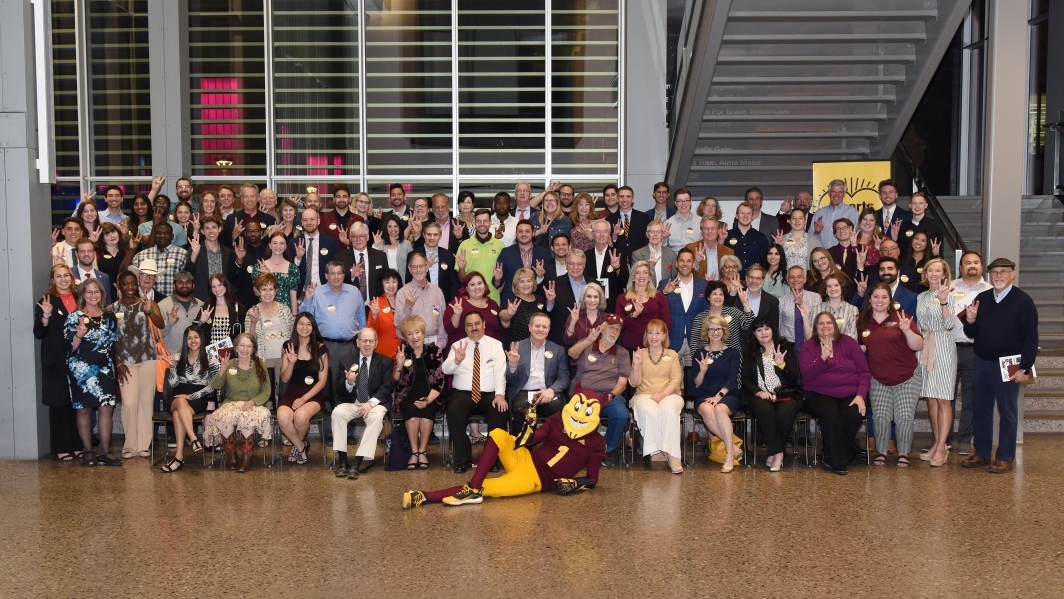 Each year, the ASU Alumni Association hosts a reunion for a different school, organization, club or academic affiliation. This year’s event brought together an impressive array of student government leaders who continued to be innovators and changemakers after graduation. 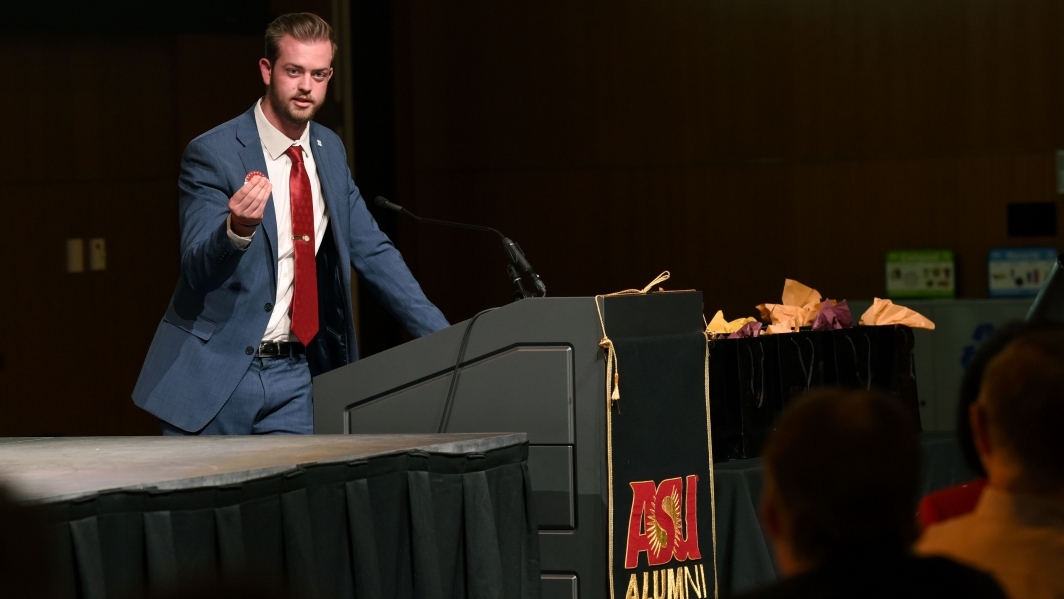 John Hopkins, USG Tempe president and student trustee, said “I think it's an incredible opportunity today to connect with past student leaders and hear about what they did on campus, and potentially rekindle some of the things that they did in their day for the student body currently.”

At the panel discussion, the panelists provided insight into their motivations for joining student government.

When Sophie O’Keefe Zelman, 2004 USG Tempe president, was asked why she wanted to lead student government, she said, “I saw USG and ASASU as a great place where all of the diverse constituencies of students could come together, and you could listen, and you could bring everyone together to create space for everyone's unique needs. I thought it would be a good opportunity where I could give a voice to all the different diverse places and organizations on campus.”

Rodriguez said the most memorable part of his time in student government was “having amazing leaders that I got to partner with who were my peers.”

Chilton explained that the Council of Presidents (COP) consists of all four USG presidents from each campus as well as the Graduate and Professional Student Association (GPSA) president.

“The Council of Presidents is a unique place for us to share the problems, the stories, of our constituency and we can work towards collective goals for the university,” Chilton said.

Chilton said COP creates a list of priorities during the summer session, and works together throughout the year to accomplish their goals.

“I’ll be darned if the list is not exquisitely considerable, unbelievably forward-thinking, and in almost every case, something that we need to do,” Crow said about the council's priorities during his speech.

John Hopkins, USG Tempe president and student trustee, concluded the evening with a final speech that ended with a “Go Devils!” cheer accompanied by confetti cannons.

“We all made an oath,” Hopkins said. “We made a commitment to go forth, conducting ourselves with ethical and honorable practices, maintaining integrity along the way and staying involved with civic engagement."

Hopkins plans to continue his education through a master's program at the Thunderbird School of Global Management, which just opened its new headquarters on the Downtown Phoenix campus.

In an interview ahead of the reunion event, Hopkins said, "I think it's an incredible opportunity today to connect with past student leaders and hear about what they did on campus, and potentially rekindle some of the things that they did in their day for the student body currently."