When Interplanetary Initiative Lab student worker Matthew Adkins graduates from Arizona State University with his master's in mechanical engineering this semester, he’s moving on to an engineer’s dream job. After graduating with his master's in mechanical engineering this semester, ASU student Matthew Adkins will join aerospace company Blue Origin as a thermal analysis and management engineer. Download Full Image

Adkins will become a thermal analysis and management engineer for the Advanced Development Program at aerospace company Blue Origin.

Adkins began his grad program in 2020, and soon after started looking for a student job in an on-campus lab. He knew he wanted to work in aerospace after graduation, so the position as a “lifeguard” at the Interplanetary Initiative Lab (so-called because of their essential role in managing the lab) was a perfect fit.

He quickly became an indispensable part of the team and participated in projects for industry leaders like the ExoCam project, which he and other lifeguards worked on for NASA.

“The lab job is like a real job," Adkins said. "Every time I network with industry professionals, the response I get is that I’m already doing the work that a real-world full-time job would ask you to do as a thermal engineer.”

What he appreciates about the work he’s doing at the lab is that he sees every stage of the project, from concept to testing, all at a quick pace. That helps him better address the needs of the customer because he knows what issues they might face and can avoid them.

Soon, he’ll move on to Blue Origin, where he’ll work on projects like Orbital Reef, a NASA project whose academic sector ASU's Interplanetary Initiative is leading. The work he’ll be doing mirrors the work he’s doing for his thesis, which is doing a thermal analysis of the DORA CubeSat.

“I’m really excited to be part of Blue Origin," Adkins said. "They talk about moving heavy industries into space, and I think it’s really cool to be part of the team that’s working towards that.”

Part of the interview process was a presentation made to a panel, during which he talked about his work at the Interplanetary Initiative Lab. When it comes to the relationship between his time at the lab and his new job, Adkins’ message is clear: “I got this job because of the opportunities I had at the lab.” 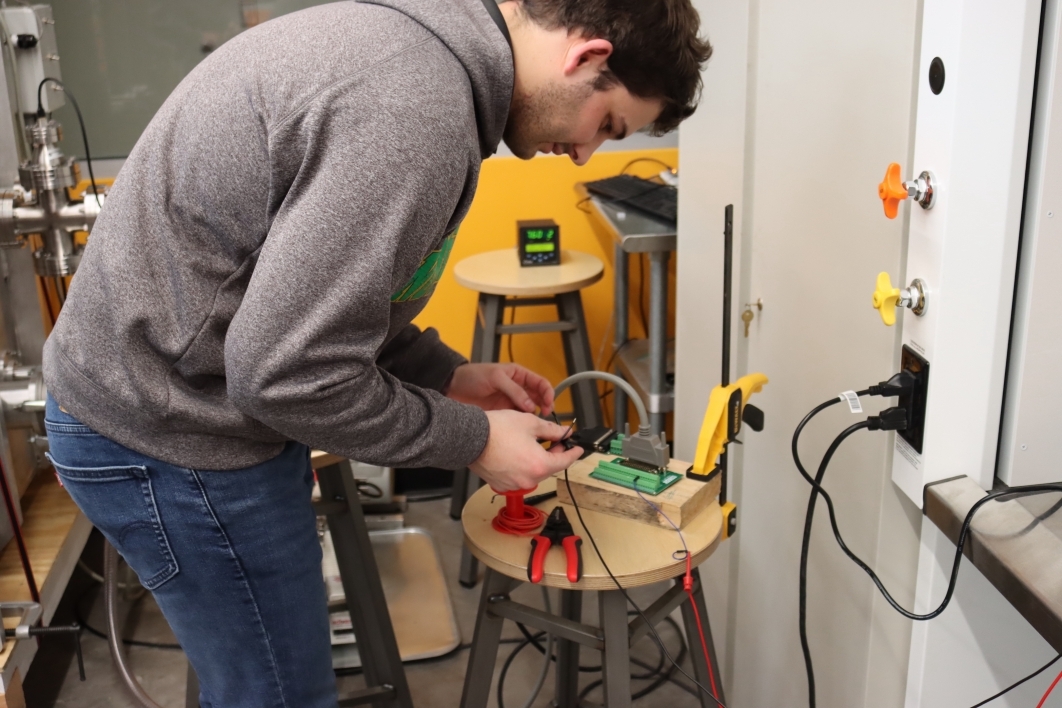 At ASU's Interplanetary Initiative Lab, student worker Matthew Adkins appreciates being able to see every stage of the project, from concept to testing, all at a quick pace. 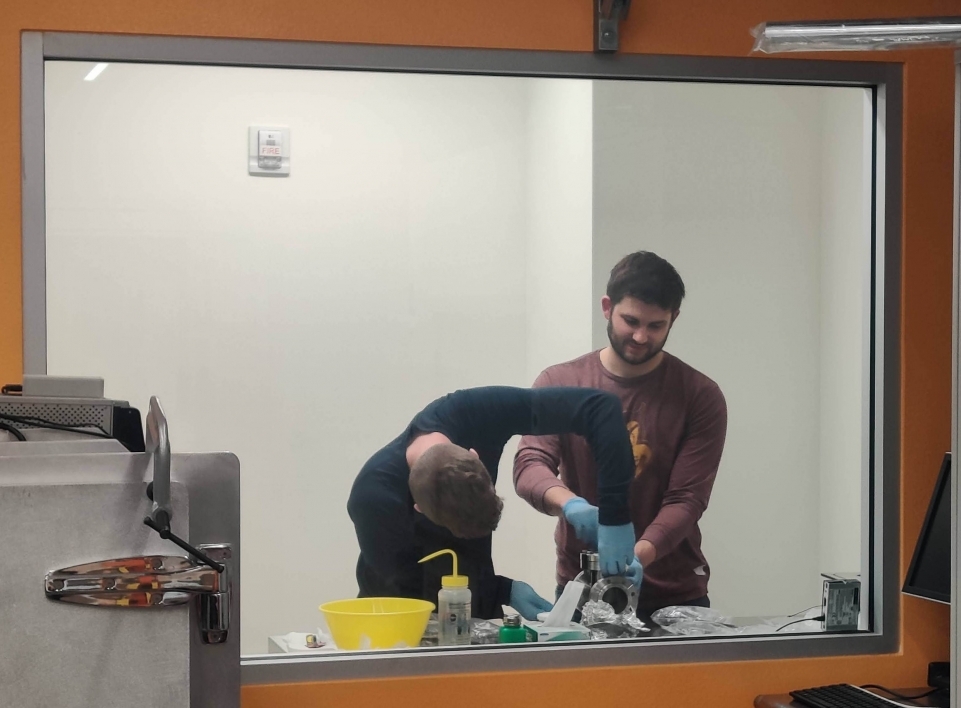 Soon, Adkins will move on to aerospace company Blue Origin, where he’ll work on projects like Orbital Reef, a NASA project whose academic sector ASU's Interplanetary Initiative is leading.

Students who would like to get involved or industry professionals looking to take advantage of the lab's facilities can reach out to iilab@asu.edu.

Nestled among the sun-lit trees on the east side of Arizona State University’s Tempe campus is a different kind of tree. It’s a first-of-its-kind mechanical tree, primed to become a major technology in the global fight against climate change. The tree features a metal column and 5-foot diameter disks, with each disk holding six “leaves.” If widely deployed, many of these trees could have a... Carbon Collect’s MechanicalTree, based on the research of ASU engineer Klaus Lackner, will collect carbon from the atmosphere and help fight climate change

Nestled among the sun-lit trees on the east side of Arizona State University’s Tempe campus is a different kind of tree. It’s a first-of-its-kind mechanical tree, primed to become a major technology in the global fight against climate change. The tree features a metal column and 5-foot diameter disks, with each disk holding six “leaves.” If widely deployed, many of these trees could have a positive impact on our planet by mitigating the carbon dioxide in the atmosphere.

The first commercial-scale “MechanicalTree” is being installed on a test pad just north of the Biodesign C building. The tree there is based on the research of ASU engineering Professor Klaus Lackner, a founder of the idea of direct air capture for the removal of carbon dioxide from Earth’s atmosphere. Lackner has been working with Carbon Collect Ltd., from Dublin, which has taken Lackner’s pioneering ideas and will make commercially available devices for the removal of carbon dioxide from the air.

When completed and operational, the MechanicalTree at ASU will rise to a height of 33 feet (10 meters) to collect carbon from ambient air. Once loaded with carbon, it will retract into a canister that is 9 feet (2.7 meters) tall, where it gives up the carbon drawn from the air. 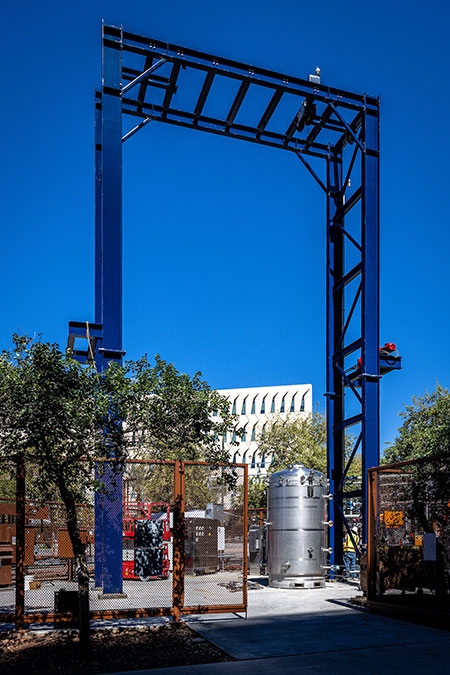 The blue gantry stands above the base of the MechanicalTree. When completed and operational, the MechanicalTree will rise to a height of 33 feet (10 meters) to collect carbon from ambient air. Once loaded with carbon, it will retract into the canister, where it gives up the carbon drawn from the air. Photo by Charlie Leight/ASU News

Unlike other carbon-capture technologies, Carbon Collect’s MechanicalTree technology can remove CO2 from the atmosphere without the use of blowers or fans. This makes it a passive, lower cost and scalable solution that is commercially viable. When deployed at scale, the technology could help humans curb the growing amount of greenhouse gases in Earth’s atmosphere and, thus, help to combat the effects of global warming.

“Carbon dioxide is a waste product we produce every time we drive our cars or turn on the lights in our homes,” Lackner said. “Carbon Collect’s MechanicalTree can recycle it, bringing it out of the atmosphere to either bury it or use it as an industrial gas.”

“Our goal is to accelerate the global climate effort, as set out in UN Climate Change conferences to contribute to reversing global carbon emissions,” said Pól Ó Móráin, chief executive officer of Carbon Collect. “Our passive process is the evolution of carbon-capture technology, which has the ability to be both economically and technologically viable at scale in a reasonably short time frame."

Reyad Fezzani, vice chairman of Carbon Collect, added: “We plan to scale the technology starting with a series of direct air capture ‘carbon farms’ designed to capture roughly 1,000 tons of CO2 per day.”

When the tree-like column is fully extended and its disks spread apart, air flow makes contact with the disk surfaces and the CO2 is bound up by a special sorbent material. During regeneration, the disks are lowered inside the canister. Inside the chamber, the CO2 is released from the sorbent. The released gas is then collected, purified, processed and put to other uses, while the disks are redeployed to capture more CO2.

The tree on ASU’s campus, when operated continually, is expected to remove up to 200 pounds (90 kg) of carbon per day.

Carbon dioxide is an odorless, colorless gas that is a byproduct of burning fossil fuels and other natural processes. Humans release more than 36 billion metric tons of CO­2 into the atmosphere annually, significantly changing Earth’s natural carbon cycle. The excess carbon dioxide traps heat and causes global warming. Humans have been adding atmospheric carbon by as much as 2.5 ppm annually.

“We had the opportunity to solve this problem 40 years ago,” Lackner said about carbon dioxide in Earth’s atmosphere, which is now increasing past a concentration of 420 ppm. “We now seem to have locked into the problem. We are going to have to pull some of the carbon out of the atmosphere in order to balance this.”

Carbon Collect’s team comprises leading individuals from business and science. The company holds exclusive global rights to key innovations of Lackner at ASU. The company has designed, engineered and fabricated the MechanicalTree and sponsors ongoing research on carbon removal at the university. 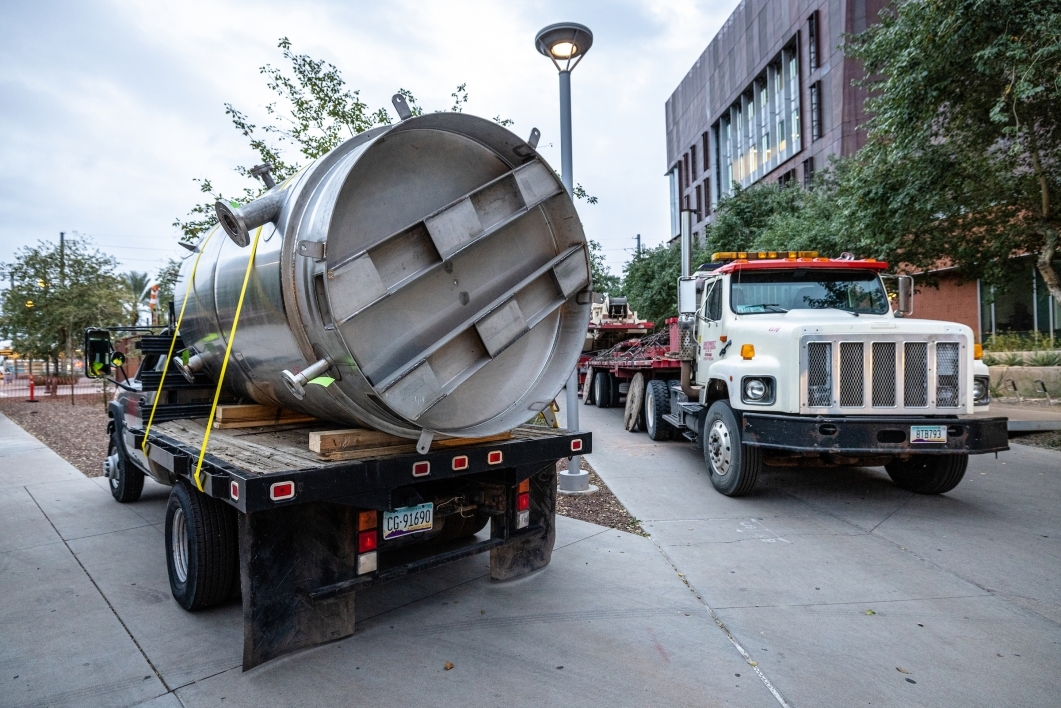 The drum, or canister, that will hold the base of the MechanicalTree arrives to the installation site on the Tempe campus Feb. 16. It is based on the research of ASU engineer Professor Klaus Lackner, who has been working with Carbon Collect Ltd. The Irish company has taken Lackner’s pioneering ideas and will make commercially available devices for the removal of carbon dioxide from the air. 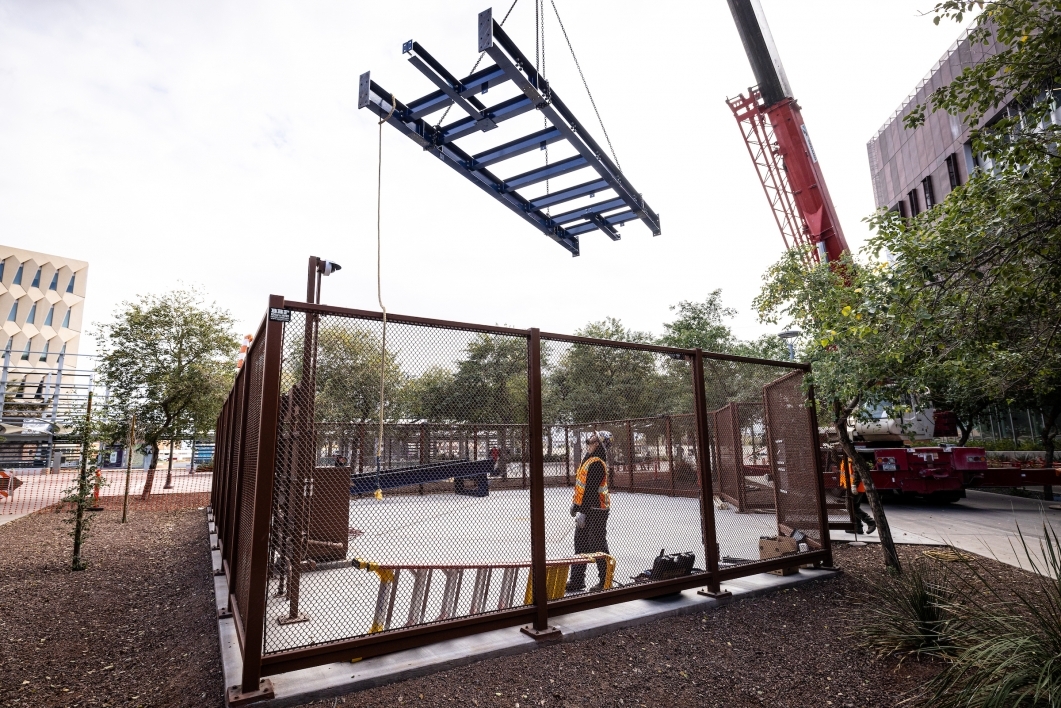 A crane moves pieces of the gantry into the test bed location Feb. 16. Biodesign C is visible on the right; the new ISTB7 on the left. At the rear of the test bed, barely visible through the fence, is a Valley Metro transit station. Passengers waiting for the light rail or a bus will be able to see the MechanicalTree when it's operating and extended to its full height. 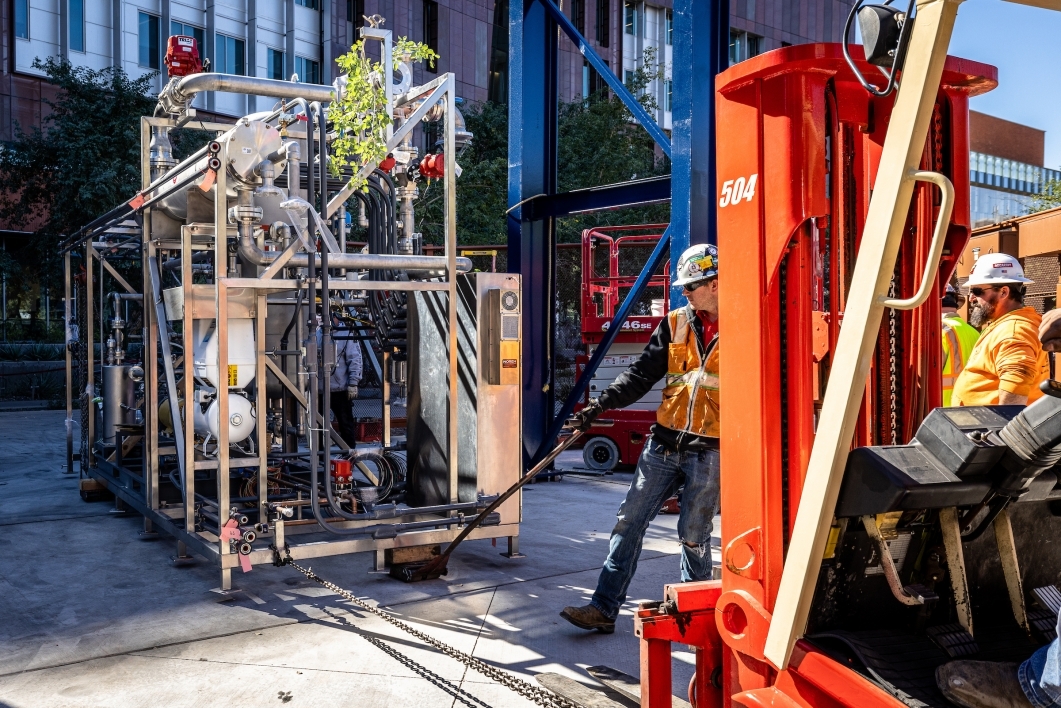 Workers bring in the skid, which will control the collection of captured carbon dioxide, on Feb. 18. CO2 collected by MechanicalTrees will be able to be buried or put to other uses as an industrial gas.

Top image: Technicians run pressure checks on the MechanicalTree on March 8 during its installation near the Biodesign C building on ASU's Tempe campus. The large canister forms the base of the tree; when it is fully extended, a column of disks holding "leaves" of a special sorbent material will remove carbon dioxide from passing air to combat global warming at scale. Photo by Charlie Leight/ASU News