In the summer of 2016, George Bcharah’s family was granted visas to leave war-torn Syria and travel to the United States.

Shortly after arriving in Arizona in 2018 — they had been in Minnesota for two years — the Bcharahs discovered they did not qualify for health insurance because of their legal status. George’s father ran out of his heart medication. His mother had to be taken to an emergency room for severe chest pain.

George became responsible for navigating the labyrinth health care system, which can be intimidating for U.S. citizens, much less refugees who face language barriers and other obstacles that preclude them from finding the best care.

That experience led Bcharah, a junior at Arizona State University majoring in medical microbiology, to become a co-executive of REACT, a student-led partnership between ASU and Mayo Clinic Alix School of Medicine.

REACT — Refugee Education and Clinic Team — is an entry point for Maricopa County refugees into the health care and social services systems; its clinic is open the first and third Saturdays of every month on ASU’s West campus.

“Once I moved here, I saw how hard it was for my family to adjust,” Bcharah said. “I sort of stepped in to help out. But not every family has that sort of resource. Maybe their kids are young. Maybe they don’t speak English. So, that’s what we try to do here. We try to become a support system for these families.” 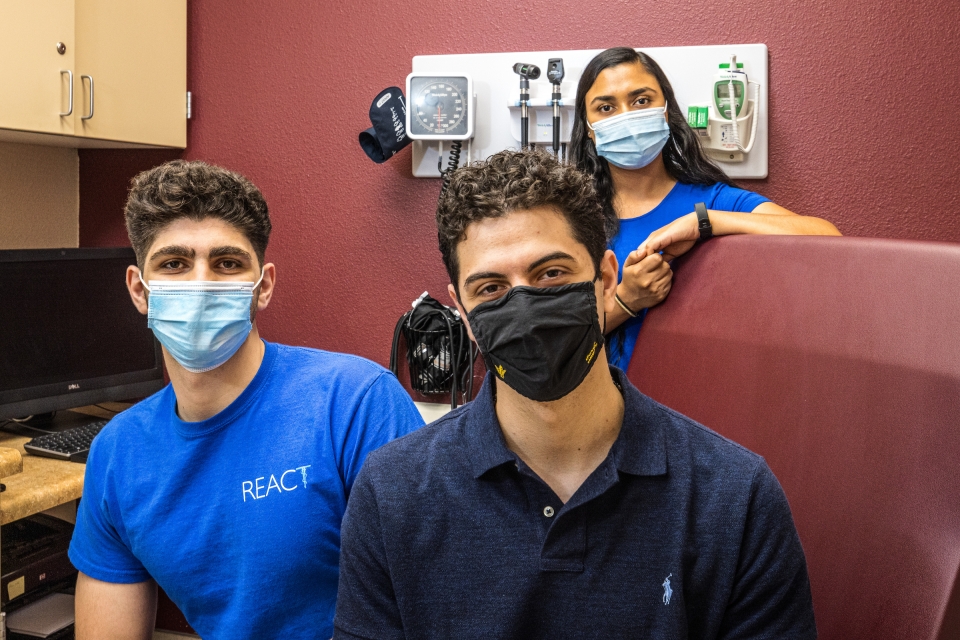 REACT got its start in 2018 when ASU student Julia Lorence, having attended Mayo Clinic’s Transform conference, was inspired to create an organization that serves undeserved communities. Mayo Clinic medical students already had established their own student outreach group to the same communities, and the partnership was born.

“The dean of the Mayo medical school tells a story that medical students came to her and said, ‘We want to start a free clinic,’” said Judith Karshmer, dean of ASU’s Edson College of Nursing and Health Innovation. “And she said, ‘Well, would you like to at least pass anatomy?’”

The students were not dissuaded.

They developed relationships with refugee organizations around the Valley, created a comprehensive care program and finally, after being delayed by the pandemic, were able to open the clinic earlier this year.

REACT, which currently includes about 30 ASU students — most of whom are pre-health majors and from Barrett, The Honors College — is not a primary care provider for refugees. Instead, it’s a first step in getting them comprehensive medical aid.

Think of it as a triage center.

“We kind of bridge that gap for individuals who have just arrived or individuals who have fallen through the cracks and are no longer in the health care system,” said ASU student Rujuta Takalkar, a REACT co-executive. “We provide physicals and health screenings to identify people who might be at high risk and need to be seen by a specialist or another primary care provider. And then we make sure to refer them to practices that already work with refugees and are equipped to serve refugees the best.

“We also provide social service referrals. So, if any concerns come up during the visit, like they’re experiencing issues with housing or food insecurity, we make sure to provide them resources and referrals about where to go.” 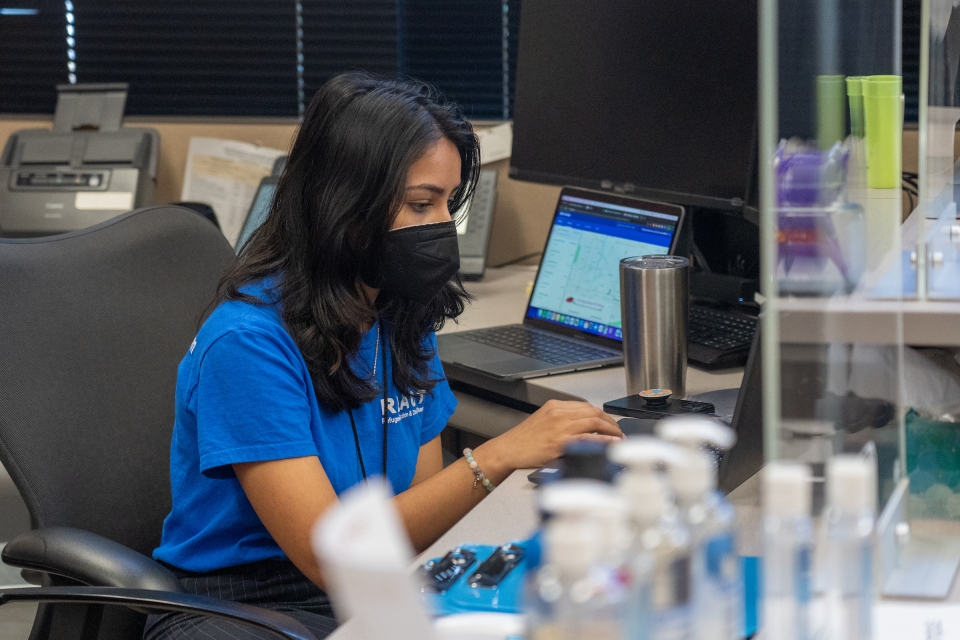 Fourth-year biological sciences and justice studies major and REACT co-executive Rujuta Takalkar works at the front desk of the clinic on the ASU West campus on April 2. Photo by Samantha Chow/ASU

REACT leaves nothing for chance.

Refugees are given Lyft rides to the clinic to ensure there are no transportation issues. Once inside, they first meet a patient navigator, an undergraduate student who helps them fill out forms. If there is a language barrier, REACT uses the CyraCom translation service to foster improved communication. Once the forms are done — the patient navigator will walk the patient through the forms to answer any questions they might have — the patient meets with a medical student.

The medical student devises a care plan and presents it to the volunteer physician on site. After the plan is finalized, they explain it to the patient and provide him or her with any referrals or medications needed. Then, the patient is given a Lyft ride back home.

REACT also provides follow-up services to ensure patients have received their recommended care and help with any issues that might have arisen.

“We try to really form a support system for the patients as they begin their journey here in the U.S.,” Bcharah said. 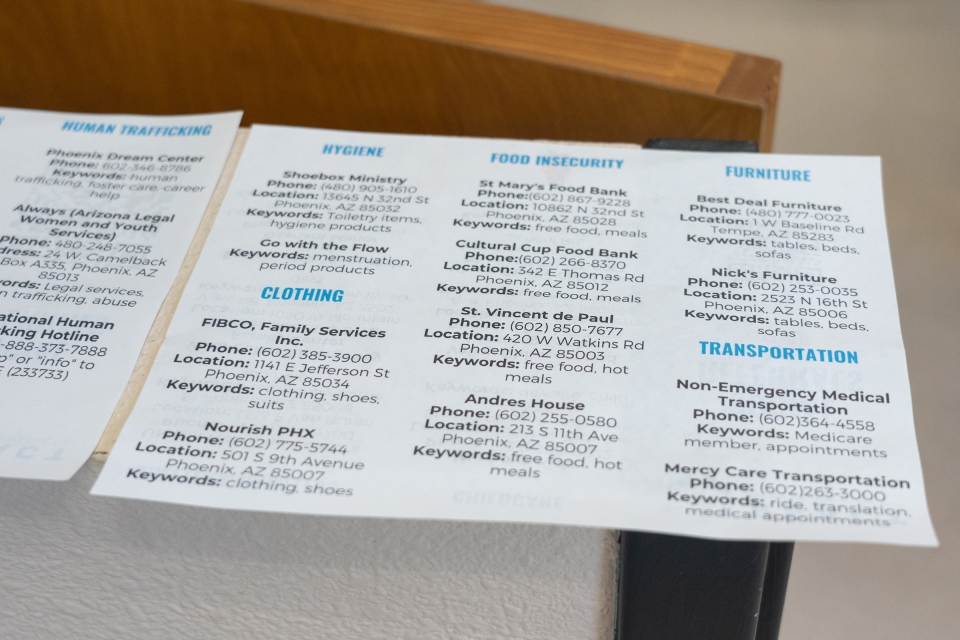 The clinic provides resource sheets for its patients. Photo by Samantha Chow/ASU News

ASU and Mayo students began this journey to help others. What they’ve discovered in the process is that they’re reaping benefits as well. The students are volunteers — REACT is not a mandated part of ASU’s curriculum — and as such develop a personal stake in the health of the communities they serve, said Chance Marostica, a first-year Mayo Clinic medical student and one of the original founders of REACT.

“These students are donating their time,” Marostica said. “That they’re here tells you they care. It means something more to them. That’s what really drives and fuels their passion. That’s why there are students who worked on this years ago, who knew they would never see it open, but they continue to be involved.”

REACT also is an opportunity for students — both undergraduate and medical — to gain a greater appreciation for the refugee community they serve.

“What they find out is that they have a lot to learn from these folks,” Karshmer said. “These people bring their own strengths, their own culture, their own values. That’s what we can learn about ourselves, how to take that in and celebrate that. It’s just an amazing opportunity to develop as a graduate or a student in a medical program.”

Karshmer expects REACT to continue to grow as word of its availability spreads throughout the refugee community. For now, having its doors open is an accomplishment worth celebrating.

Top photo: The REACT Clinic is a student-led partnership between ASU and Mayo Clinic Alix School of Medicine to address the health care disparities of refugee communities around Phoenix. Patients can be seen by caregivers in one of three exam rooms on ASU's West campus. Photo by Charlie Leight/ASU News