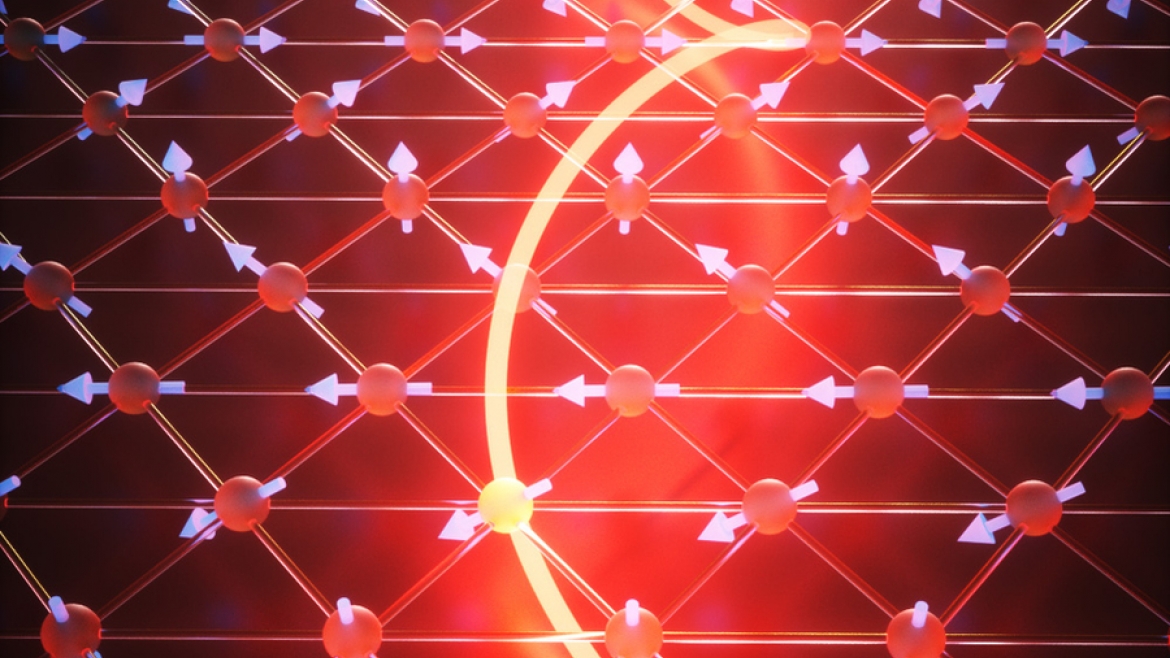 ASU physics professor makes an impact on the material world

We live in an A-to-Z chemical menagerie that makes our modern material world possible.

That runs the gamut, from aluminum to zeolites, including the concrete high-rises, lithium batteries, single-use plastics and stretch polyesters in between.

The highest-impact materials can even define a society, or epochs. Think the paleolithic Bronze or Stone ages all the way to our recently strangled supply of computer chips that dominate our information-age society. 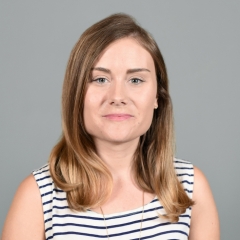 Arizona State University Department of Physics Assistant Professor Antia Sanchez Botana dreams daily of the material world. Her main quest is to find new materials that could lead to the next innovation wave. She is a theorist, meaning that she uses computers as her canvas to explore materials with new functions, and then pairs up with leading experimentalists from around the world who can ultimately put those theories to the test.

Their palette is the 100-plus elements of the chemical periodic table. From this infinite number of chemical combinations, what finally appears on her lab’s canvas is only limited by their imaginations — and the laws of physics.

There are two main themes Sanchez Botana is researching that may lead to the next big thing: superconductivity and multiferroics.

To gain a better understanding of each, one simply must follow the electrons.

“In all cases, we study how electrons behave in those materials and, in many cases magnetism and superconductivity are actually in competition with one another, so they are related,” Sanchez Botana said.

Sanchez Botana has been on a roll. Recently, a pair of new discoveries — on top of Sanchez Botana scoring a recent Sloan Fellowship and being selected for a chair of excellence position at Laboratoire d’Alliances Nanosciences-Energies du Futur — have not only made her mark at ASU, but are making the worldwide materials research community take notice.

Superconductors are defined as a state of matter that has no electrical resistance, meaning they are the most efficient materials on Earth for transmitting electricity. This means that they can conduct electricity without any loss of energy due to heat and do not allow magnetic fields to penetrate.

Superconductors have already transformed medicine with medical imaging technologies and made high-speed magnetic bullet trains possible. But they also require very expensive super-cooled magnets and refrigeration units to do their job, as anyone who has had to pay for an MRI out-of-pocket can attest.

Finding a superconducting material that can do its work at higher temperatures is the current holy grail of materials research.

A generation ago, a discovery of new high-temperature superconductivity in copper oxide ceramic materials propelled scientists J. Georg Bednorz and K. Alex Muller to the Nobel Prize in physics in 1987. After a 30-year quest, 2019 witnessed the first report of superconductivity in a nickel oxide material.

And so, Sanchez Botana teamed up with Harvard experimental Assistant Professor of physics Julia Mundy to make and test structures predicted by her models. Mundy’s group wants to advance their construction of a novel topological superconductor that could serve as the foundation for faultless quantum computing.

Then, last fall, they led a study published in the prestigious journal Nature Materials, which demonstrated a new family of superconducting materials that further refines the nickel oxide superconductors. Harrison LaBollita, a graduate student in Botana’s group, performed the bulk of the theoretical calculations with contributions from ASU Professor Onur Erten and postdoc Emilian Nica.

Together, the team synthesized a sandwiched, quintuple layer of square-planar nickelate and waited on the experimental results from Mundy.

Then, one day, she received an email from Mundy. “I have to talk to you,” she wrote. “We have something you won’t be disappointed about.”

Mundy sent her the results, and there, within the graphs, was a clear drop in resistance.

“It’s very shocking because you see a drop in the resistance to zero,” Sanchez Botana said.

They had discovered a new superconducting material.

“I think it's one of the most exciting moments of my life because, as theorists, we always like to predict superconductors," Sanchez Botana said. "That has been our thing. But to actually see the experimental realization for the first time was shocking.”

The superconductivity had a zero resistance at about 13 degrees Kelvin — still a super cold (-260 Celsius) temperature, but incredibly important because finding any superconducting material is such a rare feat. What is most important to forwarding the science is to better understand how the new material superconducts in comparison with others.

Their theoretical description and results suggest that the quintuple-layer nickelate compound possesses an electronic structure that sits between that of the copper-oxide ceramics and infinite-layer nickelates. It can also be tunable by the dimensionality of the system.

“Our work opens up future avenues in which chemical doping and artificial layering may be harnessed in concert to map out and optimize superconductivity,” Sanchez Botana said.

The other new discovery shoe that dropped and added to Botana Sanchez’s accomplishments is a recent study this spring on an exotic, atomic-thin material.

Her theoretical work has helped lay the groundwork of a new discovery from a group led by MIT experimentalists to discover an exotic, “multiferroic” state in a material that is as thin as a single layer of atoms. 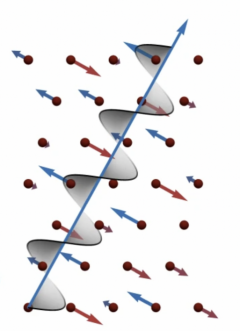 Their observation is the first to confirm that multiferroic properties can exist in a perfectly two-dimensional material. The findings, published in Nature, pave the way for developing smaller, faster and more efficient data-storage devices built with ultrathin multiferroic bits, as well as other new nanoscale structures.

“Two-dimensional materials are like LEGOs — you put one on top of another to make something different from either piece alone,” said study author Nuh Gedik, professor of physics at MIT. “Now we have a new Lego piece: a monolayer multiferroic, which can be stacked with other materials to induce interesting properties.”

Multiferroics are a burgeoning field. In materials science, “ferroic” refers to the collective switching of any property in a material’s electrons, such as the orientation of their charge or magnetic spin, by an external field.

They have potential for applications such as actuators, switches, magnetic field sensors and new types of electronic memory devices.

Materials can possess one of several ferroic states. In most cases, materials are either ferroelectric or ferromagnetic. Rarely do they embody both states at once.

For instance, ferromagnets are materials in which electron spins collectively align in the direction of a magnetic field, like flowers pivoting with the sun. Likewise, ferroelectrics are composed of electron charges that automatically align with an electric field.

In the recent Nature paper, the team looked deeper into the 3D nickel iodide (NiI2) synthetic material, known to be multiferroic in bulk form.

“The important thing for us at least was to understand how is the behavior of the material changing as you change the number of layers? That's the question that we wanted to address and were motivated by from the theoretical point of view,” Sanchez Botana said.

So, the team set about trying to re-create the 3D material, just like a 3D printer, and start by laying down a single layer at the bottom.

When they did so, the team was able to build the monolayered multiferroic material, an atomic sheet of electrons arranged just so that at around 20 degrees Kelvin, the material was found to be both ferromagnetic and ferroelectric.

But how did they do it?

Again, it turns out you need something like a Lego material.  That physical force that holds them together is called Van der Waals interactions.

“What that means is that interactions are very strong in the plane, but they're very weak out of the plane. But we don't yet know for certain whether in terms of its ground state, the material is the exact same as what you have in the 3D bulk or whether something changed at the monolayer level experimentally. At least theoretically, we think that it may have kept similar properties,” Sanchez Botana said.

And so, next the experimentalists will need to journey even further down the road to examine the properties in greater detail.

“Before, we didn’t know what to work with if we wanted to make a nanoscale multiferroic device. Now we do. And we are starting to make these devices in our lab now,” Comin said. “We want to use electric fields to control magnetism, to see how fast we can switch multiferroic bits, and how we can miniaturize these devices. That’s the road map, and now we’re much closer.”

Originally from Spain, Sanchez Botana’s curiosity for physics was ignited at an early age, with her love for science only growing due to women she has encountered throughout her career in academia.

“As a female doing science, theoretical physics in particular, one has to overcome extra barriers, in particular many biases and stereotypes,” Sanchez Botana said. “I think that two factors that made me move through those challenges were my love for science and having great female mentors.”

Her first foray into physics came in high school. As a teenager growing up in the cooler, rainier, Atlantic-facing climate of A Coruña, a city in the Galician region of northwestern Spain, Sanchez Botana still remembers the high school physics teacher who made all the difference in launching her on the journey to her career path.

“I always had a big curiosity, for how things work, I guess,” she said. “I wanted to break things open to see how they work inside, and then I had a really, really great high school physics teacher.”

Fast-forward, and Sanchez Botana received her PhD in physics from the University of Santiago de Compostela in Santiago, Spain. After that experience, she journeyed into America, with a postdoctoral fellow at Argonne National Laboratory and at the University of California, Davis.

With all her recent achievements, Botana would certainly make her former teacher prouder than ever. Now, she pays it forward to inspire her own students.

Since joining ASU in 2018, Botana’s motivation comes not only by her passion for science but also by the students she can work with at ASU.

“The satisfaction of my own curiosity by solving a complicated problem is a great source of joy,” she said. “Having fun with what I do for work is an absolute privilege and my main driver. Being able to work with brilliant younger people every day is my other primary motivation.”

Top image: An artistic rendering shows the nanoscale spin spirals that enable the emergence of a multiferroic state — the ability to conduct electricity and magnetic in an ultrathin material — in a 2D material made of nickel iodide (NiI2). Image by Ella Maru Studio