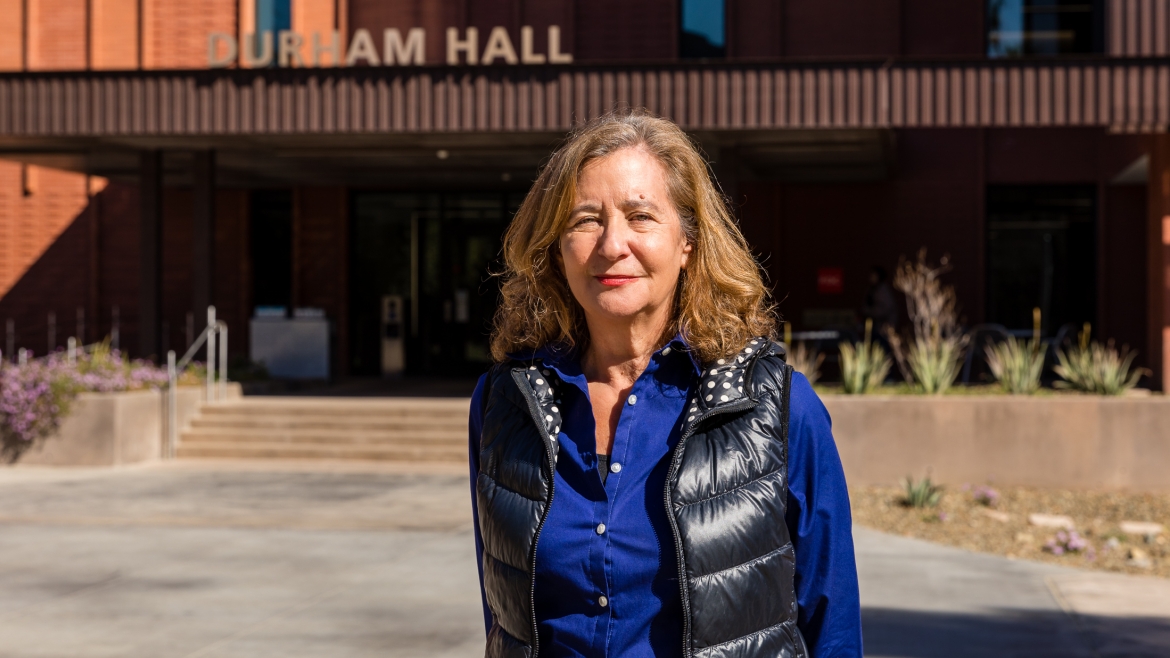 Arizona State University’s Elisa New might say April is the busiest month. That’s because the multihyphenate producer, writer, director and ASU distinguished professor of practice is also host of the PBS series “Poetry in America'' — part of a multi-platform educational initiative that “brings poetry into classrooms and living rooms around the world.”

This month, Poetry in America will host a public, in-person event to celebrate New's new base in Arizona. Registration is now open for the first-ever Poetry in America: Welcome to the West live experience. Hosted by Arizona PBS in downtown Phoenix on Wednesday, April 13, at 2 p.m., the event will showcase the most recent season on PBS and an all-star ASU faculty guest lineup that includes Alberto Ríos, Lindy Elkins-Tanton, and Jeffery Kennedy.

New’s academic home at ASU is in The College of Liberal Arts and Sciences, where she is director of the university’s Center for Public Humanities, which now administers the lauded national program. You could say that New puts the “public” in “public humanities.” She has turned her decades-long expertise in literary criticism and her excitement about new media to creating multisensory experiences in poetry.

Through a partnership with Learning Enterprise and others, the Center for Public Humanities enables high school students around the country to take ASU humanities courses for college credit. In the last two years, the program has reached over 3,000 students in 39 states.

“What's the story here? But also: What's the visual story?” New asks herself when beginning to structure an episode of the Poetry in America television show. Viewers encounter these “visual stories” as they are guided through the verse in a mélange of images, textures and sounds.The effect is not disorienting or trite, but rather an unassuming, even joyful exploration of each poem’s many layers.

Poetry has gotten a bad rap as elitist, indecipherable, inaccessible. New’s mission is to combat these inaccurate representations and garner the art form a larger audience. She said that she does that by becoming a storyteller.

Most episodes feature a high-profile guest or two. 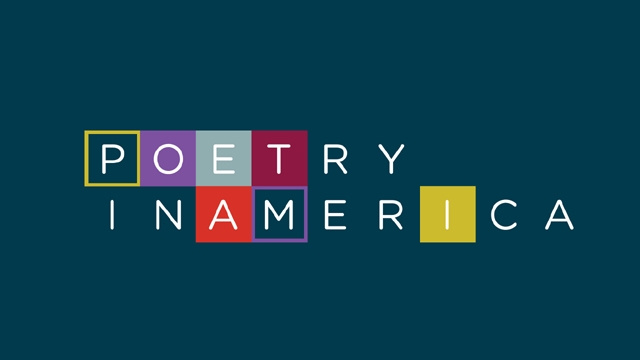 “It’s very organic,” New said about how the show comes together.

The arc of each season is decided by the team asking the question, “How can we make the season really varied, really surprising, you know, give you some education in poetry without getting too pedantic?”

In addition, New and her team make sure to include myriad voices: “We always want to be representing the full diversity of America's communities and the poetry that comes out of them.”

Finally, the show aims to present all this in an accessible way, with the viewer — not just the poetry — in mind.

There’s a bit of serendipity involved too.

An episode in Season 3 featured 2013 U.S. inaugural poet Richard Blanco and his poem, “Looking for the Gulf Motel,” in which Blanco looks back on his Cuban American childhood.

New recalled how one of the episode’s other special guests became involved.

“And Richard said, ‘Maybe have Gloria Estefan. I think she might do it,’” New said with a laugh. “And so he asked her (to join us on the show).” She did.

“And she added something extraordinary.”

Recently, the show has centered the experiences of Indigenous and Latino poets and the landscapes they inhabit, with an episode of the current season featuring Linda Hogan and ASU’s own Ríos. The move to ASU has made adding Western U.S. voices to the poetic conversation more opportune, though the impetus has always been there.

In 2020, New said, she had a kind of “taking stock” moment. She was the Powell M. Cabot Professor of American Literature at Harvard University. She had accomplished many of her professional goals and had built a thriving, model program. But she wanted to do more. She was still passionate about poetry and about sharing that passion with others.

“After having taught at two highly selective universities,” she said, “I really wanted to be, at this stage of my career, reaching wider populations of learners.

“There was a lot of scale possible.”

A friend told her, “You need to meet Michael Crow.” That friend introduced the two, and the pair spoke over the course of several months. New decided to pilot a scalable program at ASU during fall 2020. She officially joined the ASU faculty in fall 2021.

“Welcoming Dr. New to ASU as the director of our Center for Public Humanities marks an important moment in our community’s life and growth,” said Jeffrey Cohen, dean of humanities in The College of Liberal Arts and Sciences, where the center is housed. “Through Poetry in America in its various forms we are able to reach populations who love poetry already as well as many young people for whom the encounter will be transformative.

"If the humanities are to remain a vital part of our national identity, we need high-quality, widely distributed, accessible and engaging programs and courses like these. I’m especially proud that many students in underresourced schools will be earning their first college credits through Poetry in America – and these are ASU credits. If some of these successful students see themselves as future humanists as a result, then what could be better?”

New is bicoastal for now, splitting her time between ASU campuses in the greater Phoenix area and working with her longtime production staff on the East Coast.

New sees the Poetry in America television show as part and parcel of her educational efforts. Footage from the show finds its way into her educational offerings and also propels interest in these.

For New, it’s all personal, and she has every audience in mind.

The Poetry in America educational project is an initiative devoted to strengthening humanities education for learners from a wide range of backgrounds: college, high school and middle school learners, as well as educators. To this end, Poetry in America offers a suite of for-credit poetry courses through Harvard Extension School, including a professional development series designed for K–12 teachers, and a for-credit dual enrollment program through ASU. The Poetry in America for High Schools dual enrollment program is offered in partnership with the new ASU Center for Public Humanities, of which New is the founding director; ASU Learning Enterprise; The College of Liberal Arts and Sciences at ASU; ASU Prep Digital; and the National Education Equity Lab. Poetry in America has also worked in partnership with Amplify Education, a publisher of next-generation curriculum and assessment programs, to create an English Language Arts poetry curriculum that has reached 1 million middle school students across the country.

Support for Poetry in America is provided by the National Endowment for the Humanities, Dalio Philanthropies, the Alfred P. Sloan Foundation, the Poetry Foundation, Deborah Hayes Stone and Max Stone. Season 3 is distributed to PBS stations nationwide by PBS Plus, with seasons 1 and 2 distributed nationally by American Public Television.

Top photo: Elisa New stands in front of Durham Hall, where the Center for Public Humanities is headquartered, on the ASU Tempe campus. Photo by Bruce Matsunaga/ASU

The Lorraine W. Frank Office of National Scholarships Advisement has announced that Anusha Natarajan, a third-year student in Barrett, The Honors College at Arizona State University, has been selected for the Henry Clay Center College Student Congress, a two-week summer program for undergraduates interested in public policy, politics, diplomacy and modern leadership.

The program selects just one student per state, so Natarajan, a sociology, history and political science major, will not only represent ASU, but the entire Copper State. The congress will take place June 6–17 at the University of Kentucky in Lexington; Marymount University in Arlington, Virginia; and Washington, D.C. 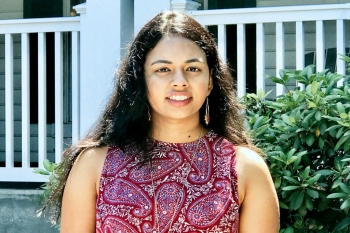 “There is always a lot of publicity and excitement when students win well-known fellowships like the Rhodes Scholarship or Fulbright,” said Kyle Mox, associate dean and director of ONSA, “but there are hundreds of fellowships out there that provide incredible experiences such as the Henry Clay Center.

“Not only will Anusha reap the benefits of this immersive public policy experience, she can also benefit from the acclaim that comes with being the sole representative of the state of Arizona. That’s quite an honor.”

During the congress, the 51 delegates will learn about the dynamics of the policy process through an experiential and immersive curriculum and engage with lawmakers, academics, government relations experts, policy advisers and other leaders to explore the challenges of formulating comprehensive public policy.

Natarajan is deeply committed to promoting civic engagement — in fact, she was a 2021 recipient of the Congressman Ed Pastor Civic Leadership Medallion in 2021, which recognizes ASU students who demonstrate exemplary dedication to public service and engagement.

As chair of the ASU Civic Engagement Coalition and lead fellow for the Andrew Goodman Foundation, Natarajan has implemented events and initiatives to share information about public policy, promote voter registration and encourage voter turnout among her peers.

This semester, she collaborated with the ASU Library to hold an event to educate the university community on the history of Arizona's statehood and to register voters. She hopes to create programs and policies that increase voter registration and turnout among college students, and the Asian American and Pacific Islander community.

“To me, this work matters because it is important for people to be engaged in their communities and understand what is happening around them,” Natarajan said.

Most recently, she served on a panel at the SXSW Conference in Austin, Texas, “Gen Z is Making Change: New Tools for Impact”, which focused on tools and methods used by youth activists to become empowered to make an impact now and in the future.

Natarajan also has held numerous governmental and research internships, including Phoenix Sister Cities, U.S. Department of State Bureau of Educational and Cultural Affairs, and the McCain Institute. She was also a student research aide for the Arizona Constitution Project in ASU’s School of Civic and Economic Thought and Leadership.

Following her time at the Henry Clay Center Student Congress, Natarajan will complete her senior year at ASU and prepare for a doctoral program that will pull together her interests in public policy, particularly participation in voting and elections, strengthening voter turnout and fairness in elections globally.