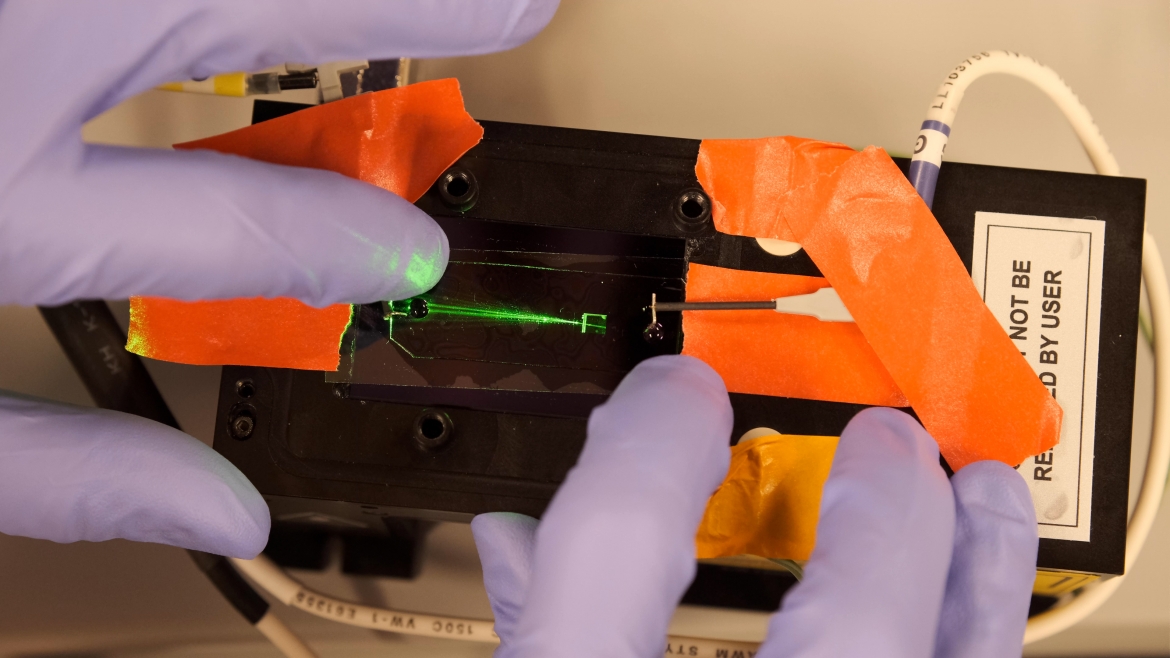 Two years ago, in the early days of a novel coronavirus spreading methodically to almost every corner of the planet, it was something of a race. The planet’s best scientists were trying to keep up.

“When the pandemic started, one of the things that became eminently clear was that we were way too slow at diagnosing it and determining if somebody had COVID-19,” says Neal Woodbury, vice president of research and chief science and technology officer with Arizona State University’s Knowledge Enterprise.

In the pandemic’s early months, health care in the U.S. and other nations had stumbled over the scale, speed and accuracy of testing for the virus.

“And we all realized that there wasn't going to be one set of solutions. You weren't going to solve this one way,” says Woodbury.

Testing for the virus — especially prior to vaccinations being available — was a key component in containing it.

The “magic-wand wish” was for “point-of-need” testing: simple, fast, cheap and reliable testing tools that could be put to use in crowded places like airports, theaters, concerts — anywhere people might gather quickly in large numbers.

Scientists within ASU pulled together a huddle to share ideas.

“What we wanted to accomplish was to create tests that allow people to detect early infection so that when they gather, they can gather with confidence that they're not going to be in an environment where there's potential transmission,” says Jennifer Blain Christen, who leads ASU’s BioElectrical Systems and Technology group.

It was a tall order. Biotech firms, government health agencies and universities around the world have been running together in this marathon for more than two years. ASU’s group won strong financial support from Arizona’s Department of Health Services in September 2020. The money has been put to work in three silos of virus testing innovation.

Blain Christen is an electrical engineer. She and her team now have working prototypes of test machines that would be small and portable. They begin with a small amount of saliva, which is pressed through a flat plastic cassette. Wells in the cassette pull the saliva into chemical reactions. Within minutes, a scanner reads the outcomes as positive, negative or in error. Picture the device inside a doctor’s office, or at the entrance of a large meeting.

“We could simply ask them to come about 40 minutes early, provide a saliva sample and have very high-quality testing that detects early infection,” says Blain Christen, an associate professor in the Ira A. Fulton Schools of Engineering. “Before you have any symptoms, before an antigen test would be effective, we can detect those early indicators of COVID-19. And that allows people to gather, and they'll be in a safe environment.”

Work continues to make the devices even smaller, more streamlined and modular.

Mark Hayes is a molecular scientist. He and his team have poured their efforts into solving the testing problem through what’s called microfluidics. Think of it as sorting viruses and particles through flat, clear plastic slides, then hitting them with lasers and electrical currents. Hayes explains the big idea with a familiar image: the gigantic beam of light that shines from the Luxor hotel's pyramid in Las Vegas.

“You can see individual insects flying around in that beam of light,” says Hayes, a professor in the School of Molecular Sciences. “And it's a similar idea here. We have a little microfluidic device; we're shooting a laser on it. If there's a particle there — we filter out everything else but the coronavirus particle — it'll scatter a little bit of light, and we can pick that up on our cameras.”

Chips for sorting the virus particles could be made inexpensively and on a massive scale.

Alex Green is a biomedical engineer, now at Boston University’s College of Engineering. Green and his team drove new work in lab-ready diagnostic tests. Their role was converting an assay he had developed for the Zika virus to work for SARS-CoV-2, which became the “reader” for the devices.

“Basically, you want to have the ability to do the tests in a very efficient manner, and be able to handle up to 10,000 tests per day, with high accuracy,” Green says. “For instance, this could be used in situations where you want to test students in a particular school district or where you’re serving the needs of a large community of people and need to understand the status of the virus inside that population.”

Each of the three efforts will need to pass review and testing by agencies like the U.S. Food and Drug Administration before they can emerge as products we’ll see out in the world, in places like testing labs, medical offices, airports or sports venues. That will probably take at least a year.  But from the start, the ASU team was determined that their efforts would go beyond the labs of academia.

“All of these projects had to have a pathway to utilization,” says Woodbury. “In other words, it wasn't, ‘We're going to do some cool stuff and write a paper.’ That was not our objective. We were going to set them each up so that they could be commercialized and move out into the world. And I'm happy to say that each of them has a company path associated with them.”

ASU scientists did the research. Three companies are now carrying forward these efforts to commercialization:

Top image: A microfluidics device using beams of light to identify whether coronavirus particles are present.

Over the last two decades, scientists have discovered unusual ridge networks on Mars using images from spacecraft orbiting the Red Planet. How and why the ridges formed and what clues they may provide about the history of Mars has remained unknown.A team of scientists, led by Aditya Khuller of Arizona State University’s School of Earth and Space Exploration and Laura Kerber of NASA’s Jet Propu...

The networks may hold records of ancient groundwater

Over the last two decades, scientists have discovered unusual ridge networks on Mars using images from spacecraft orbiting the Red Planet. How and why the ridges formed and what clues they may provide about the history of Mars has remained unknown.

A team of scientists, led by Aditya Khuller of Arizona State University’s School of Earth and Space Exploration and Laura Kerber of NASA’s Jet Propulsion Laboratory, set out to learn more about these ridges by mapping a large area of Mars with the help of thousands of citizen scientists. 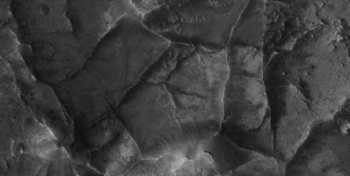 Their findings, which have been recently published in Icarus, show that the ridges on Mars may hold fossilized records of ancient groundwater flowing through them.

How the ridge networks were formed on Mars has remained a mystery ever since they were found from orbit. Scientists have determined that there are three stages that were involved to create the ridges, including polygonal fracture formation, fracture filling and finally erosion, which revealed the ridge networks.

To learn more about these ridges, the team combined data from the NASA Mars Odyssey orbiter’s THEMIS camera and the Mars Reconnaissance orbiter’s CTX and HiRISE instruments. Then, they deployed their citizen scientist project using the platform Zooniverse.

Nearly 14,000 citizen scientists from around the world joined in the search for the ridge networks on Mars, focusing on an area around Jezero Crater, where NASA’s Perseverance rover landed last February. Ultimately, with the help of the citizen scientists, the team was able to map the distribution of 952 polygonal ridge networks in an area that measures about a fifth of Mars’ total surface area. 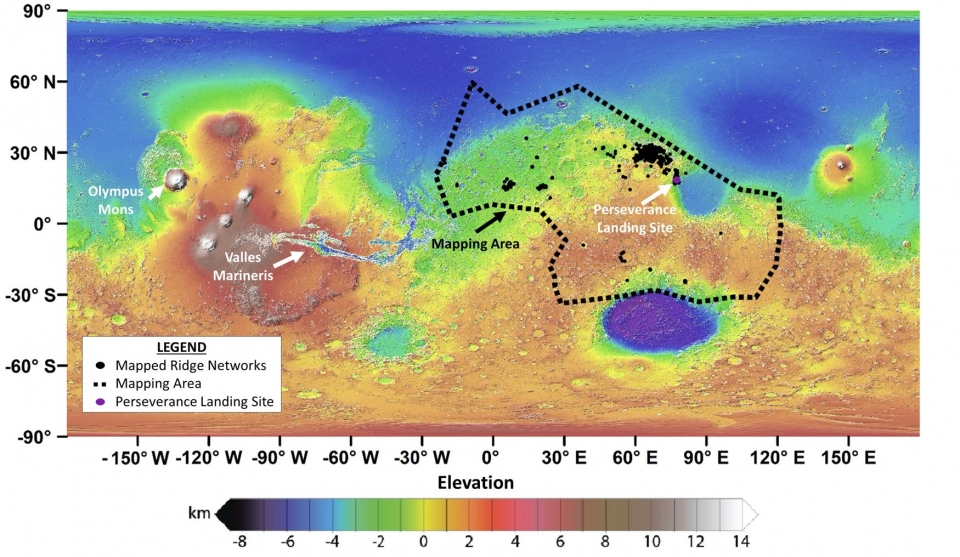 “Citizen scientists played an integral role in this research because these features are essentially patterns at the surface, so almost anyone with a computer and internet can help identify these patterns using images of Mars,” Khuller said.

Most of the ridge networks (91%, or 864 out of 952) that were analyzed are located in ancient, eroded terrain that is approximately 4 billion years old. During this time period, Mars is believed to have been warmer and wetter, which might be related to how these ridges form.

Previous research in this area has shown that those ridges which were not covered with layers of dust showed spectral signatures of clays. Since clays form from weathering in the presence of water, this suggested to the research team that the ridges may have been formed by groundwater. While the abundant surface dust in these regions makes it difficult to check whether the newly mapped ridge networks by Khuller and Kerber’s team also contain clays, their similarities in shape and dimension suggest that they might form from similar groundwater processes. 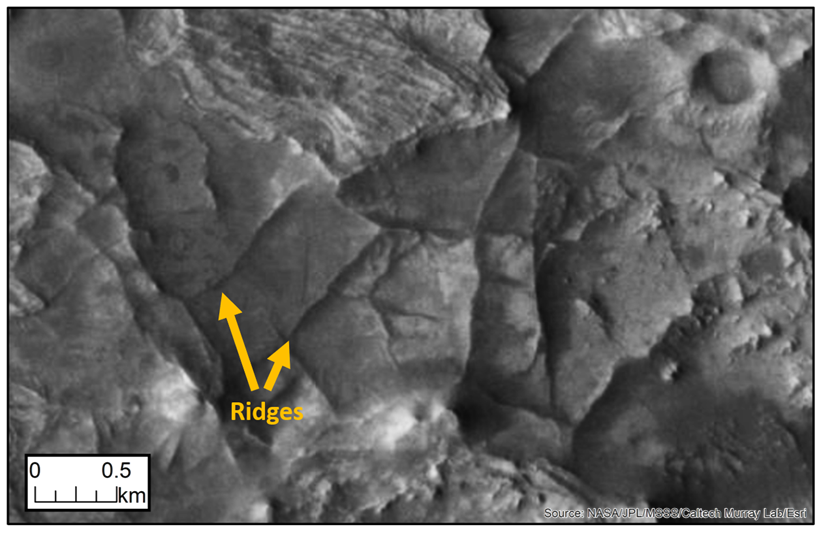 This discovery helps scientists "trace" the footprints of groundwater running through the ancient Martian surface and determine where it was suitable, during that time 4 billion years ago, for liquid water to be flowing near the surface.

“We hope to eventually map the entire planet with the help of citizen scientists,” Khuller said. “If we are lucky, the Mars 2020 Perseverance rover might be able to confirm these findings, but the nearest set of ridges is a few kilometers away, so they might only be visited on a potential extended mission.”