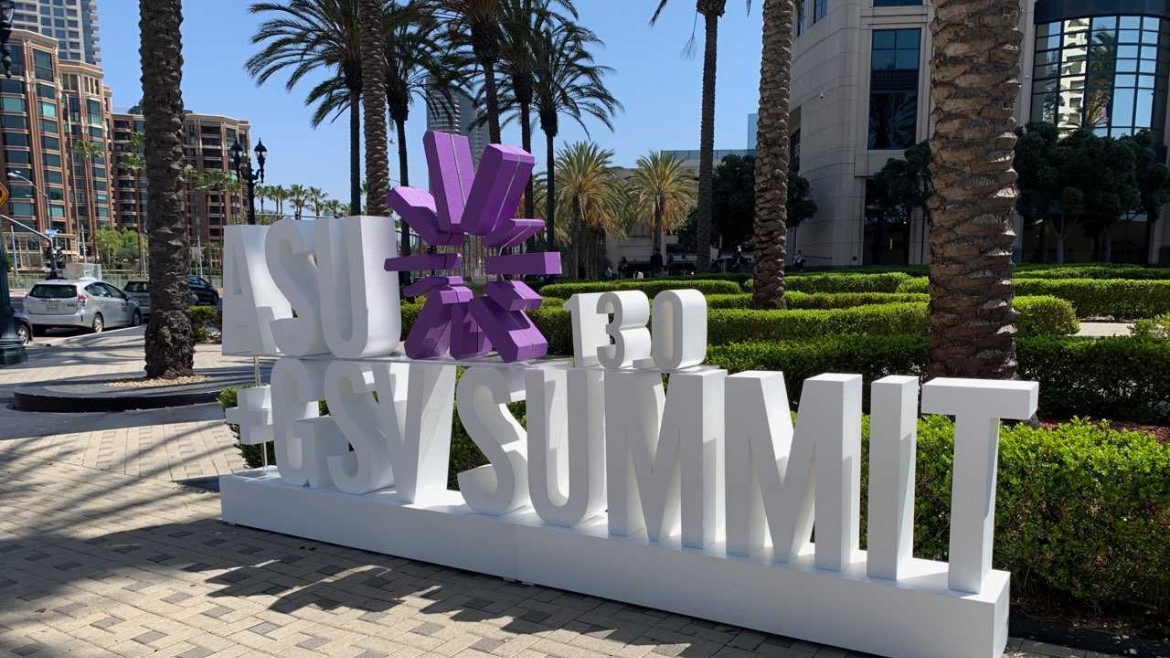 Access, equality in education part of discussion at ASU+GSV Summit

The ASU+GSV Summit, a collaboration between Arizona State University and Global Silicon Valley, kicked off its three-day conference Monday in San Diego.

The annual event brings together educators, industry leaders, investors and entrepreneurs to take on the challenge of ensuring everyone has an equal opportunity to participate in the future.

Many of this year's sessions covered learning and education, including panels on virtual reality and the future of teaching.

Here's a look at some of the conference highlights.

(Note: We will be adding updates to this page throughout the summit.)

Arizona State University’s new technology immersive experience Dreamscape Learn is important not only because it engages students with emotional storytelling, but also because the actions in the platform empower them to know that they can reverse climate change.

ASU President Michael Crow discussed the new technology on Monday along with Walter Parkes, the Hollywood producer who is CEO of Dreamscape Immersive, and Peter Schlosser, vice provost and vice president of the Julie Ann Wrigley Global Futures Laboratory at ASU. Their session was titled “Understanding Climate Experientially.” 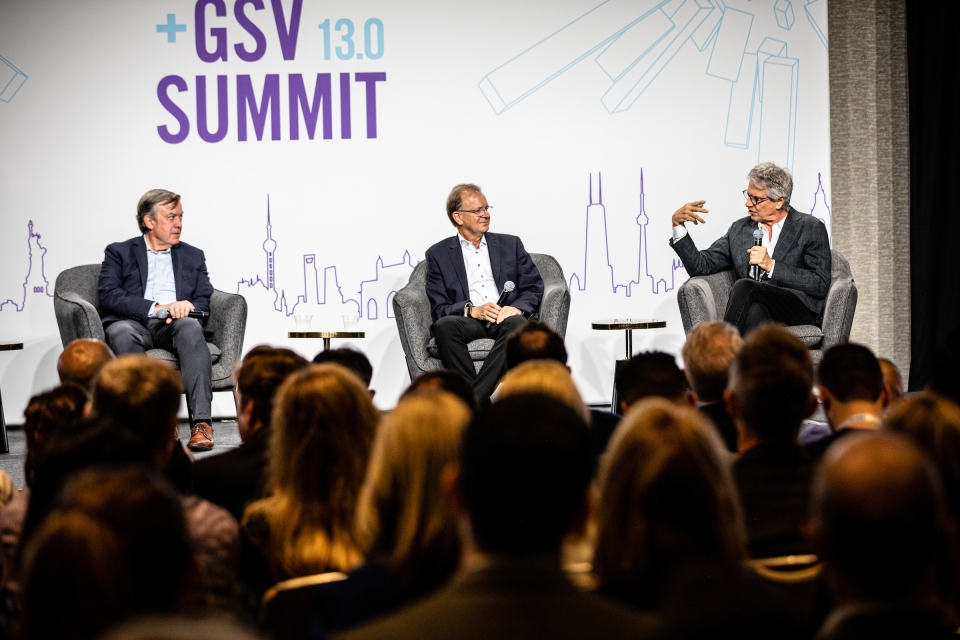 About a thousand ASU students are taking a virtual reality biology lab course on the Dreamscape Learn platform this semester.

“When I saw the first demonstrations, I was blown away,” Schlosser said. “I said, ‘That’s it.’ It’s a way for Walter and his colleagues to bring students into the world, let them see it and feel it, and see the complexities. And more importantly, let them see the urgency at which we have to deploy solutions we already have, because, in my view, we are not constrained by ideas for solutions, we are constrained by putting them into action.”

Parkes said that the next step will be creating a virtual classroom in which the professor and students interact through avatars that can capture the benefits of face-to-face learning.

“In the immersive classroom, they would be able to be rendered as lifelike avatars with senses, able to make eye contact and able to communicate with expressiveness and body language,” he said.

Classrooms could meet in King Tut’s tomb, inside a human body or on the ocean floor.

Crow said that all the technology will become available to anyone, anywhere, including schools and homes.

“We have to get past this notion that math and science are hard. They’re not hard; we just don’t know how to teach it to a broad enough spectrum of people,” he said.

Parkes said that the storytelling aspect of the experience is key.

“I’ve spent most of my career engaging audiences,” said Parkes, producer of movies including “Gladiator” and “Catch Me If You Can.”

“And my sense now that I’ve had the opportunity to work with truly great educators is that engagement is at the heart of everything. We need to find modalities where a certain level of expertise can be taught for a responsible citizenry.”

Being Indigenous in the 21st century

On Monday afternoon, Bryan Brayboy, President’s Professor and director of the Center for Indian Education at ASU, moderated a panel titled "Being Indigenous in the 21st Century."

The panel examined the unique status of American Indian and Alaska Native peoples, the challenges and possibilities those communities face, and how higher education and technology can help them thrive in the 21st century. 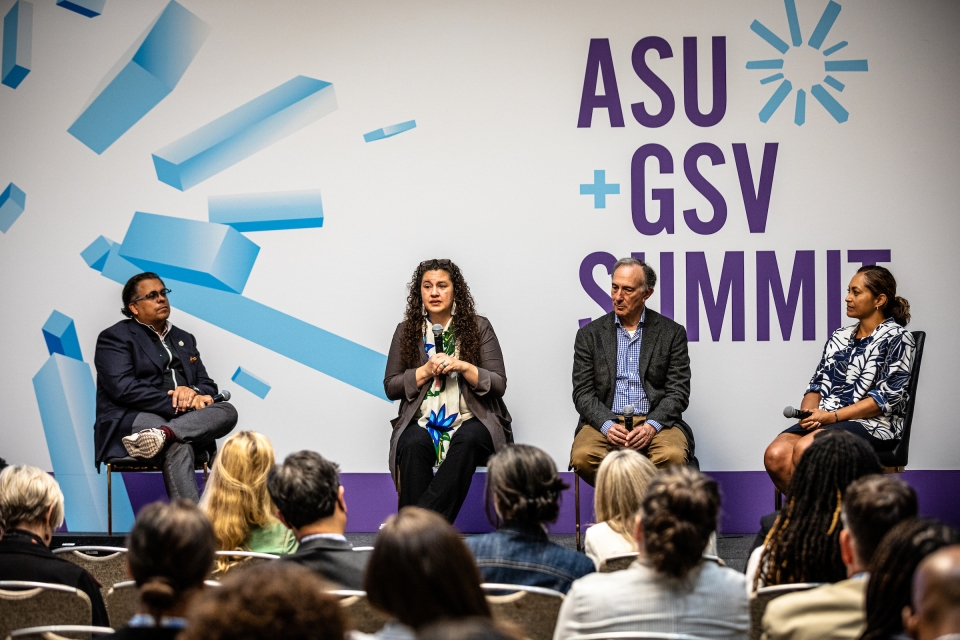 From left: Moderator Bryan Brayboy leads a discussion on "Being Indigenous in the 21st Century" with Wai'ale'ale Sarsona, vice president of the Kamehameha Schools Hi’ialo Group; Peter Seligmann, CEO and co-founder of Nia Tero; and Megan Bang, senior vice president of the Spencer Foundation, at the ASU+GSV Summit on Monday. Photo by Ken Fagan/ASU News

One question that Brayboy presented to the panel was: "What are some challenges that you think educators and people in the world of technology and venture capital need to know about, to face Indigenous peoples?

"When we began to transition to digital — like the rest of the world in early stages of pandemic — one of our greatest fears as parents who choose to educate their children in the Hawaiian language was will they see themselves online? Will they see themselves in the digital education that is being produced? Or is this another form of colonization?" said Wai'ale'ale Sarsona, vice president of Kamehameha Schools Hi’ialo Group. "This is what I push for, 'What are we doing to make sure children have their space?'"

When asked about the places of possibility for Native people in higher education and K–12, Megan Bang, senior vice president of the Spencer Foundation and professor of learning sciences at Northwestern University, said:

Higher education must evolve as a driver of lifelong learning, not just a physical location to obtain a degree, according to Michael Crow, president of Arizona State University.

He was the keynote speaker on Tuesday morning at the ASU+GSV Summit, where he participated in a Q&A session with Thomas Friedman, reporter for the New York Times.

“We have to stop thinking of a college degree in the traditional sense, and we have to think of it as learning moment on a pathway,” Crow said. “It’s a measurement of learning capacity rather than an achievement in itself. We have to move away from the notion of kindergarten through college and then you’re done with learning and you go to work.”

Universities must be part of a new process to identify and collate all the education, formal and informal, that takes place across a lifetime, Crow said. That would include learning in the military, scouts, hobbies and at work.

Maintaining learning across the life span is key for citizens to manage the disinformation propagated in the lightning speed of social media and for the health of our democracy, he said.

Technology will enable personalized learning throughout a person’s lifetime, but not at the expense of the human touch.

“We’re talking about using technology to enhance the breadth of learning to the individual’s taste,” he said. “Technologies need to be carefully considered.”

ASU created its School for the Future of Innovation in Society to address these issues, Crow said.

“We felt the university sector had missed the boat in trying to understand how to guide technology – not just the market forces, but the social complexities and the disruptive positives and negatives that are occurring.” 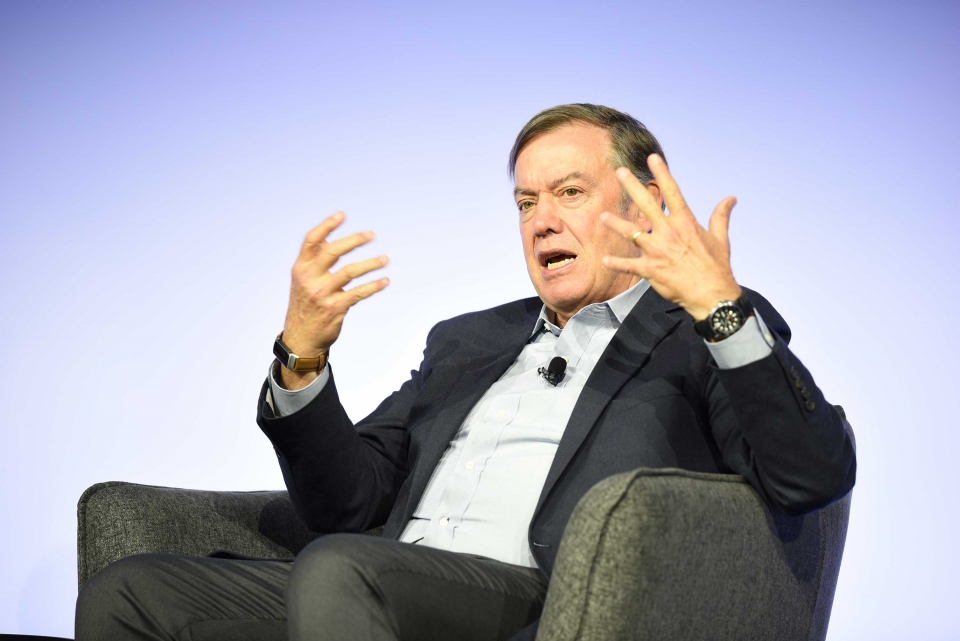 ASU’s Mary Lou Fulton Teachers College has bucked the trend of enrollment decline among teacher-preparation programs by recognizing that the current model of education is obsolete, according to the dean.

Carole Basile, dean of the Teachers College, said that the pandemic revealed that people prioritize two things in a career — flexibility and teamwork, neither of which teaching provides.

“We have to change the way we think about teachers. They can’t be in a one-teacher, one-classroom model anymore. It’s not sustainable,” she said.

Basile spoke at the ASU+GSV Summit on Tuesday at a session titled “The Future of Teachers and Teaching.”

The future of teaching will be teamwork, with educators having different specialties and working together, she said.

“What if we could think differently about how we prepare teachers and how we build schools so that instead of saying, ‘Here’s your 30 kids,’ we could say, ‘Here are the kids and let’s figure out the adults these kids need.’ “

ASU is training educators to collaborate, lead teams and engage with the local community, she said.

We are in a moment for us to actually change the structure of our schools.

In addition, students have more mental health issues than ever before, so the Mary Lou Fulton Teachers College changed its student support teams to add a variety of expertise, such as counseling, wellness, financial literacy and academic support.

Basile said she is optimistic.

“We are seeing people coming and saying, ‘Yes, we need something different.’ We are in a moment for us to actually change the structure of our schools.”

When asked about the challenges of creating and deploying 2D and 3D learning experiences, David Sudarma, chief technology officer at ASU Prep Digital, said access is an issue.

“Those higher tech requirements are not readily available. We have thought about solutions, and access is really the driver,” he said.

“How can we bring this to students around the world?” said John Logan, executive creative director at the Knight Agency. “Not all students are on laptops and have internet. We knew the  tech existed from the gaming world with everyone on their phones. But there was no business model that we could figure out to make work for schools. Until our friends at Google joined the fight and the solution.”

Steven Butschi, head of education at Google Cloud, talked about Google’s interest in this space.

“There is interest that we have to create access to technology that could change the educational experience — taking an interactive and immersive experience, and it doesn’t have to just be on a $2,000 to $3,000 device.” 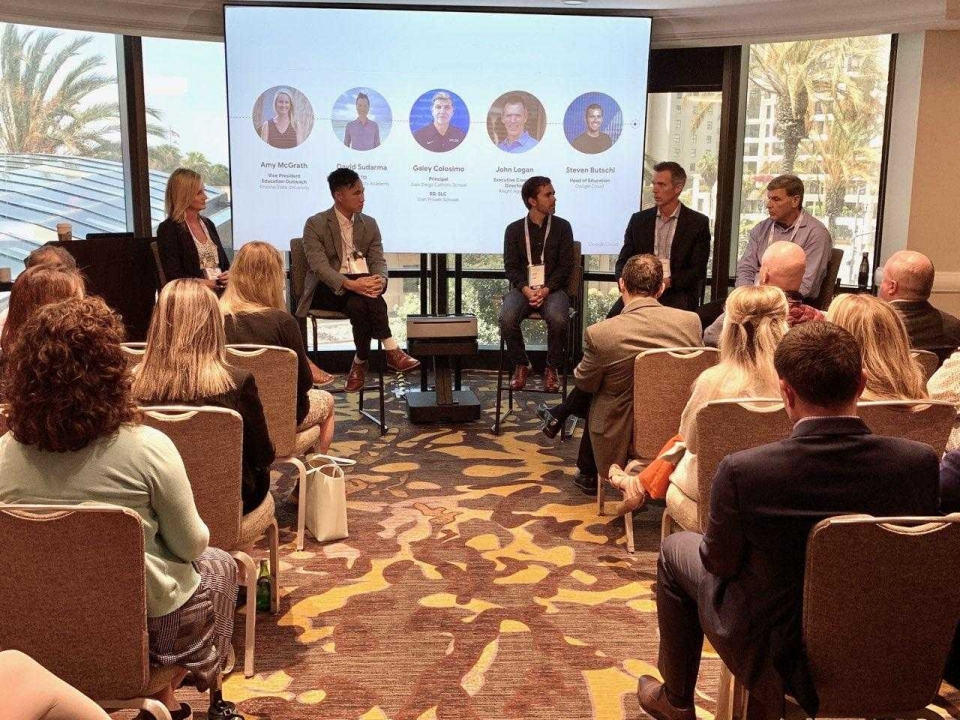 Education experts discussed the need for universities to provide access to all learners, at every stage of life, in a session titled “Reimagining the Future of Education: from Pre-K to Post Gray.”

“The learning enterprise fosters experience at every stage of life,” said Maria Anguiano, executive vice president of ASU Learning Enterprise. “If we create more access, we have to do it in different ways if we are going to make it accessible at every stage of life; that is, meeting learners where they are and speaking to them. Innovators and educators should use learned experience to speak to everyone.”

Moderator Mike Wang, head of new ventures and learning experience at ASU Learning Enterprise, asked what is the problem we need to solve with regard to access?

Audrey Dow, senior vice president of the Campaign for College Opportunity, said it comes down to resources.

“The reality is, the way higher ed is designed, we do not have the space, both physical and resources, to serve all of those students who are qualified and talented to go to college. We have a mismatch of what the economy is demanding what individuals need for social mobility and how higher education was designed,” she said.

When it comes to how a university engages with a student, the panelists talked about nontraditional methods.

“The ASU Study Hall channel is an exemplar of how storytelling can look like on the platform, she said. “ASU and Crash Course came together to create a new series of content to have what is essentially a video CliffsNotes version of how to be successful in college classes. This is a new way of showing up.”