Long, who holds joint appointments in the School of Molecular Sciences and School for Engineering of Matter Transportation and Energy, is director of the Biodesign Institute’s Center for Sustainable Macromolecular Materials and Manufacturing (SM3). 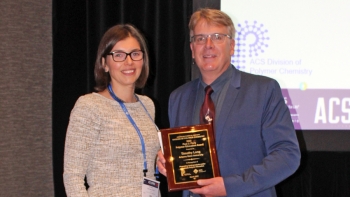 The Paul J. Flory Award for Polymer Education commemorates the achievements of the late Paul Flory, a 1974 Nobel Prize recipient who was a physical chemist at Stanford University; it was created to recognize, encourage and stimulate outstanding achievements by an individual in promoting undergraduate or graduate polymer education. Flory won the award posthumously in 1986.

“Many emotions have flooded over me during the past week,” Long said. “I’m honored, excited and humbled.”

It’s particularly fitting that the award nomination package was assembled by Long’s former undergraduate and graduate students. He has mentored over 120 graduate students and postdoctoral fellows.

“It’s not really the NSF grant or the NIH grant or the large DOE grant that defines our success," Long said. "These awards are vehicles to train our students, and at the end of the day I’m so proud of our graduates whose careers I’ve helped to nurture.”

“This award is very well deserved,” said Professor Tijana Rajh, director of the School of Molecular Sciences, which is part of The College of Liberal Arts and Sciences. “Tim Long has made important contributions in solvent-free polymerization, in the design of degradable polymers, and in the development of sustainable precursors for polymer production. The designed engineering of macromolecules represents a critical component of molecular solutions to major societal problems, and at ASU, Tim is leading the way.”

Sustainability and the community

Long has always thoroughly enjoyed getting out into the community helping science to be more understandable.

He explains that a big part of sustainability is engaging the community and catalyzing conversations that span so many different people. It includes citizens in the community as well as high school students and undergraduates who are thinking about the next step in their careers, or the graduate student who's currently pursuing a PhD. A huge resource is also the retired individual who is deciding what to do next and brings a lifetime of experience.

Long feels that undergraduate research should be required for every student in science whether they go on to do a PhD or not. Science is all about doing and experiencing the excitement of the laboratory and discovering something where there's no predetermined syllabus.

“I always joke and say that the “S” in ASU stands for sustainability,” Long said. "It’s huge at ASU, and thanks to the very bold vision of President Crow, it really has become part of the fabric of the university. The SM3 center really fits within this bigger ecosystem and the universitywide focus on sustainability."

The Biodesign Institute’s Center for Sustainable Macromolecular Materials and Manufacturing is focused on the sustainability of materials as well as the impact of materials on our lives without compromising the health of the Earth.

Long is imposing a lens of sustainability on the design of next-generation polymers, plastics and materials.

“Hardly a day goes by when we don't see an article or news story on microplastics in the ocean or other detrimental impacts of plastics. However, in reality, plastics have made our lives a lot better,” Long said.

A huge challenge for the center is to re-create or rethink technologies and continue to make the world a better place without compromise to the Earth. Long came to ASU 18 months ago and is very excited by this opportunity. He said he feels as though for the last 25 years he has been making molecules, and for the next 15 he’s going to be “unmaking” them.

Long says we can’t just do away with plastics — they’re everywhere around us improving our lives.

Within the center, Long leads the integration of fundamental research in novel macromolecular structure and polymerization processes with the development of high-performance macromolecules for advanced technologies, taking full advantage of 3D printing techniques to drive sustainable production of unprecedented material designs.

“We are educating the next-generation workforce with structure-property-processing-performance relationships," Long said.

Students in McKenna Brodrick‘s outdoor survival class are used to talking about roughing it in this century.As they gathered on benches outside Hayden Library on Arizona State University's Tempe campus one recent chilly Monday evening to greet their guest speaker, they got an eyeful of what it might have looked like to survive, old-school style, in another era.Very old school.Brodrick, a faculty...

Students in McKenna Brodrick‘s outdoor survival class are used to talking about roughing it in this century.

As they gathered on benches outside Hayden Library on Arizona State University's Tempe campus one recent chilly Monday evening to greet their guest speaker, they got an eyeful of what it might have looked like to survive, old-school style, in another era. 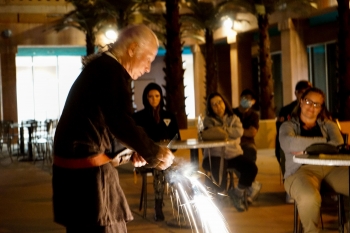 Brodrick, a faculty associate in the School of Community Resources and Development, had given them a hint beforehand about what to expect from their guest. But John “Bluebird” Crossman still was quite a fascinating sight as he approached, dressed in a handmade outfit that he said would have been encountered during the Iron Age in Europe.

Crossman, founder of the Phoenix-based Bluebird’s Survival and Ancient Skills School, walked up in a wool tunic and pants, a belt with a bird emblem that held a steel knife tucked in its sheath, a pair of sandals held together with yarn and knitted stockings. Tucked in his long purple and white hair was a bone awl.

Bone is the best material to make tools because it’s strong and easy to re-sharpen, according to Crossman. “It’s like a Swiss Army knife,” he said later on.

He said his nickname, “Bluebird,” was given to him in 1976. After making his first-ever teepee with dark blue, heavy cloth – he couldn’t justify the expense of real canvas – someone called out, “Hey, Bluebird, that’s a mighty fine looking teepee!"

Crossman dragged a cart behind him that was filled with handmade survival gear, including a fire-starting kit and a hat made of canvas and beeswax that doubles as a bucket.

After being introduced to the class, he took a drink of water from a plastic bottle, joking he needed some whiskey, then launched into his lecture.

“My joy is sharing what makes me happy,” he said when his time was up.

Students were invited to stay after to get a closer look at Crossman’s survival gear.

“(My favorite part) was the fire starter he had made using a piece of charcoal cloth,” said Marshall Morgan, a senior double major in sustainability and history. “That was something that I would never have even considered.” 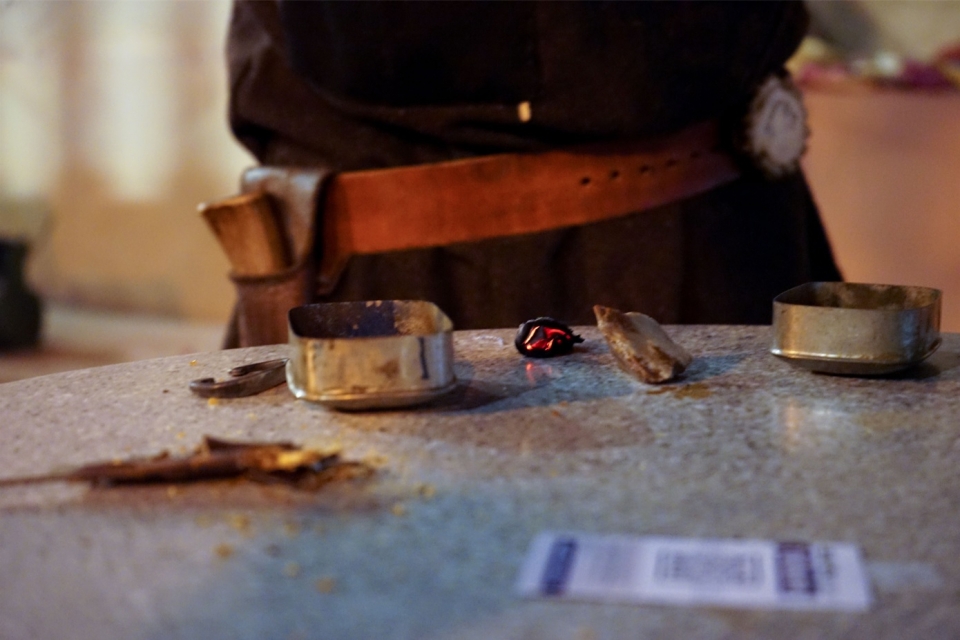 A close-up view of several outdoor survival tools with origins in the Iron Age demonstrated for a PRM 340 class by John "Bluebird" Crossman.

Morgan enrolled in the class, PRM 340, to fulfill a requirement for his minor in parks and protected area management.

“This course is unlike any other course I’ve taken,” he said. “The course itself is very fun, interactive and just overall (an) amazing experience.”

“I want (the students) first and foremost to be able to stay calm and think clearly,” Brodrick said. “I want them to be able to apply what they learn to everyday life and to walk away from this class feeling confident and strong in their decisions.”

Brodrick, the class instructor, first fell in love with the outdoors during her first family camping trip. The entire family slept under a tarp.

“It was pouring rain and that tarp … only covered like half of me,” she said. “I remember looking up at the rain coming down and thinking, ‘It feels like I should be miserable, and I’m not at all.’ It felt like it was an adventure.”

When she was 14, she started designing backpacking trips, and in 2000, she became certified as a wilderness first responder.

This is Brodrick’s fourth semester teaching outdoor survival at ASU. Students in the class meet in many locations around campus throughout each semester, including the atrium in the Farmer Education Building, the Secret Garden behind West Hall and outside the Student Services Building.

Later in the semester, students will embark on an outdoor, overnight practicum in which they will demonstrate skills they’ve learned in the course. This includes building a shelter, making a fire with no lighters or matches, purifying water and more.