According to legend, Pele, Hawaiian goddess of volcanoes and fire, once fell in love with the handsome warrior ʻŌhiʻa and asked him to marry her. But ʻŌhiʻa had already pledged his love to another, Lehua. Pele, heartbroken and furious in rage, turned ʻŌhiʻa into a twisted tree.

The gods took pity on Lehua, turning her into a flower on the twisted tree that was once her love. The two, forever joined together, would become the ʻŌhiʻa lehua tree. 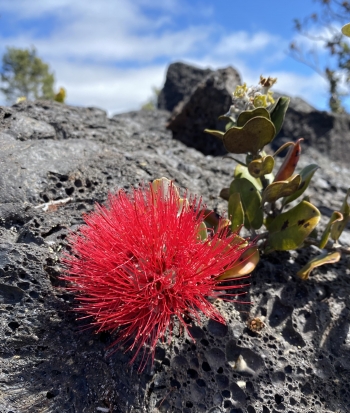 The ʻŌhiʻa lehua (metrosideros polymorpha) is a native tree to six Hawaiian islands, tied to both the environment and culture. But today, a new culprit has begun wreaking havoc on the trees and surrounding ecosystem. Rapid ʻŌhiʻa Death (ROD) is a fungal pathogen that is both unpredictable and swift in causing tree mortality. Each year, an average of 10% of trees die due to ROD.

“ʻŌhiʻa lehua is an amazing plant. It is the first to recolonize barren lava and can be found growing as different life forms, shrubs to trees, in all environments across the Hawaiian Islands, creating the foundation for the forests. Native birds have evolved to utilize its flowers. In Hawaiian culture, the ʻŌhiʻa is deeply embedded in traditional moʻolelo (stories), mele (songs) and oli (chants),” said Robin Martin, mentoring author and associate professor at Arizona State University’s Center for Global Discovery and Conservation Science.

With this native tree being threatened, researchers are seeking answers to understand the spread of ROD across Hawaii. The disease is both unpredictable and swift, driving an average annual tree mortality rate of 10% in ʻŌhiʻa, compared with the natural background rate of less than 1%. Current efforts include the ASU team’s mapping of canopies that show browning trees, a symptom of ROD. However, once a canopy has turned brown, the tree typically dies within a few weeks.

Therefore, developing methods to identify trees at risk to ROD is critical to ensure there is enough time to act and limit spread.

A new study published in Ecological Applications by researchers from the Center for Global Discovery and Conservation Science discovered aircraft-measured spectral differences in the foliar traits of trees that would later develop visible signs of ROD. This finding suggests that their unique aircraft mapping system may provide early detection of trees affected by the pathogen.

“We used repeat laser-guided imaging spectroscopy of forests on Hawaiʻi Island collected by the ASU Global Airborne Observatory to derive maps of foliar characteristics previously found to be important in distinguishing between ROD-infected and healthy ʻŌhiʻa canopies,” said Erin Weingarten, lead author, and now a PhD student at Colorado State University. “Data from these maps were used to develop a prognostic indicator of tree stress prior to the visible onset of browning.”

The ASU Global Airborne Observatory, or “lab in the sky,” mapped the two forest canopies from 2018 to 2019. Over the course of the year, one group of trees remained green. The other group changed from green to brown due to the onset of ROD symptoms. The team then assessed and compared spectral data of each group in 2018 for the foliar traits, or properties, of the leaves that have been linked to ROD. After analysis, the researchers observed key spectral differences in the leaf traits before the canopy turned brown.

"Our results indicate that airborne laser-guided imaging spectroscopy, a technology totally unique to the Global Airborne Observatory, can be used to identify infected ʻŌhiʻa prior to any visible symptoms. This will result in more time to combat a pathogen that has changed Hawaiian ecosystems forever," said Greg Asner, senior author of the study and director of the Center for Global Discovery and Conservation Science.

The study was supported by the United States Forest Service and the State of Hawai‘i Department of Land and Natural Resources.

Over the course of the past several decades, the religious landscape in the United States has changed rapidly, with about 29% of U.S. adults identifying as religiously unaffiliated and a quarter of U.S. adults saying they think of themselves as spiritual but not religious.The Spirituality and Public Life Initiative — a new project out of Arizona State University’s Center for the Study of Relig...

Over the course of the past several decades, the religious landscape in the United States has changed rapidly, with about 29% of U.S. adults identifying as religiously unaffiliated and a quarter of U.S. adults saying they think of themselves as spiritual but not religious.

The Spirituality and Public Life Initiative — a new project out of Arizona State University’s Center for the Study of Religion and Conflict — is seeking to explore and better understand this phenomenon through a collection of courses, events and more. 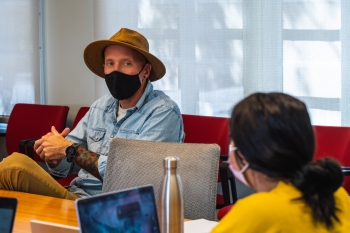 Terry Shoemaker, a lecturer in the School of Historical, Philosophical and Religious Studies and a faculty affiliate in the Center for the Study of Religion and Conflict, lectures during REL 394 Spirituality in America — a new course that examines the history and evolving nature of spirituality in the U.S. Download Full Image

“One of the fascinating things about our culture today is how deeply ‘spirituality’ resonates with people, including college-aged students, yet how people are often averse or allergic to ‘religion.’ Why is that?” said John Carlson, interim director of the center. “This reaction and self-identification has something to do with the role religion — and religious institutions — play in public life.

“We also want to consider what role spirituality might play, or could play, in public life. Because as we look around us, I think that many people would describe a sense that something deeply human but perhaps also transcendent is missing in our collective life together.”

The initiative launched this spring, with the pilot phase of REL 394 Spirituality in America — a new course that examines the history and evolving nature of spirituality in the U.S. The course is taught by Terry Shoemaker, a lecturer in the School of Historical, Philosophical and Religious Studies and a faculty affiliate in the Center for the Study of Religion and Conflict.

A second course — The Spiritual Quest — is currently in development by Tracy Fessenden, the Steve and Margaret Forster Professor of religious studies in the School of Historical, Philosophical and Religious Studies and the director of strategic initiatives in the Center for the Study of Religion and Conflict. The course will focus on literature, highlighting spiritual writing across all major world religions, as well as in nonreligious contexts.

“So many of our students identify as spiritual but not religious,” Fessenden said. “Until now, there have been no courses in religious studies at ASU focused on this path. We want students to feel they have permission to ask the big questions, to know that they stand in long, rich traditions of like-minded seekers in doing so, and to find resources in these traditions for creating just and meaningful lives, whether they take part in any kind of religious practice or not.”

In addition to the two new course offerings, the center will host Serene Jones, a leading public theologian and the president of Union Theological Seminary, for an on-campus speaking event from 4 to 5:15 p.m. on Thursday, March 31.

“Serene Jones is a distinguished scholar, the former president of the American Academy of Religion and the president of one of the most culturally significant seminaries in the country,” Carlson said. “Union Theological Seminary has long been a leader in progressive Christianity, but it is also a place that incorporates insights from — and works to bring together — other religious and spiritual traditions. I can’t think of a more important voice to launch this conversation and initiative.”

This work has been made possible by a founding gift from Penny Davis, a longstanding member of The College of Liberal Arts and Sciences’ Dean’s Council and one of the founders of Catalyst (formerly the Arizona Foundation for Contemporary Theology), a public forum for thinking about theology, faith and spirituality from a non-denominational perspective.

“My spirituality encompasses my deeply held values, how I see myself connected to the world and other people, and what energizes me for action. It influences everything I do, and is in turn influenced by my experiences,” Davis said. “I am enthusiastic about this initiative that will explore the many facets of spirituality in order to recognize how integral it is to our private and public lives.”

Looking ahead, the center hopes to host additional guest speakers and expand the scope of the initiative.

“The sky is the limit when it comes to this initiative,” Carlson said. “There is much work to be done as many scholars, foundations and research organizations are beginning to think about how this framework can apply to public life.”

Learn more about the upcoming event or how to support the Spirituality and Public Life Initiative.