Physicists have worked and wrestled with quantum theory for more than a century now, applying it to explore and help solve the profound mysteries of Albert Einstein’s theory of relativity and cosmological conundrums such as black holes, gravity and the origins of the universe.

But for Arizona State University theoretical chemist Vladimiro Mujica, there is still a vast, secret and fascinating world to explore — but rather than out there in the vastness of space time, at the nexus between everyday life on Earth and the quantum world. 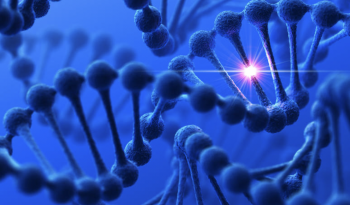 Cellular mutations in the molecule of life, DNA, happen randomly and are governed by quantum probability rules. Download Full Image

Recently, quantum mechanics has been found to play an essential role in our understanding of chemistry and biology, and the molecular theory of evolution.

Now, Mujica will get a chance to further explore this quantum world by leading a three-year, $1 million award from the prestigious Keck Foundation. Their goal is build a foundational understanding of how the sometimes weird, exotic features of quantum physics influence the very stuff that makes life work.

“To be successful, we really needed to think outside of the box, with a good foundation,” said Mujica, a professor in the School of Molecular Sciences. “So, we put this team together of leading experimentalists, but also with a firm grasp of theory — top-ranking people — to take a quantum leap in this field of science.”

For example, two key processes necessary for life: photosynthesis in plants and respiration in animals, are driven by reactions that involve the transfer of electrons in molecules and across boundaries within the cell.

Electrons themselves, in addition to carrying a negative charge, have key quantum properties, including spin, that plays a fundamental role in the molecular electron transfer processes that make life possible. 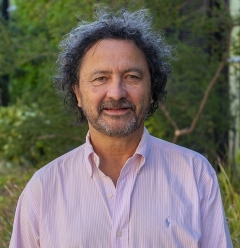 “Chiral” is the Greek word for hand. No matter how hard one tries, a left hand and right hand are non-superimposable mirror images of each other. Ever try to shake a person’s hand with the opposite hand? That awkward encounter — simply because the thumbs are in different positions — is an everyday demonstration of chirality.

It turns out molecules, and life, have the same chiral properties. But how does that help their biological function?

“We're trying to decipher in a way, a mystery of nature and evolution,” Mujica said. “Because it turns out that biological systems use these chiral molecules in proteins, DNA and RNA. These are some of the most important molecules in biology.” For example, DNA is a double-helix ladder that is intrinsically chiral. And so are the proteins encoded by these fundamental biological molecules, which are the bricks and mortars of the cell, doing all the work that makes us alive.

Are all governed by quantum effects.

These happen randomly and are governed by quantum probability rules.

One can zoom in further on life, under the skin all the way to the molecules at the atomic level and clouds of electrons in quantum states. In everyday life, we are used to electrons being transported through copper wires to deliver electricity to our homes.

But what are the wires that deliver electrons in living system, a process that involves substantial amounts of energy and heat? And how do they avoid frying life, or by proxy, us?

“In living systems, how electrons are transferred or transported depends on organic molecules,” Mujica said. “Now, organic molecules are far less efficient than copper wires or anything like that to transport or transfer electrons. But nevertheless, evolution chose this in a way.”

Mujica refers to this as a real mystery as to “why Mother Nature chose these lousy molecules for transferring electrons.”

It turns out electrons are transported in organic molecules primarily by tunneling, not diffusion as in copper wires.

“The mechanism electrons going through organic molecules is to a large extent a quantum phenomenon,” Mujica said “It’s a mechanism called tunneling, and what it implies is that electrons can go from one region of the molecule to the other, even if they do not have enough energy to overcome intrinsic barriers.”

The research team wants to investigate why and how electrons use this tunneling mechanism for biological function essential to life. First, they have designed a series of experiments using synthetic pairs of right or left-handed DNA structures. Next, they will custom tailor electron donors and acceptors as part of their structures to probe this chirality-dependent electron transfer. All this experimental effort is guided by a predictive theoretical and computational effort.

Some of the model systems tweaks they will examine are the effect of the electron donor-acceptor distance, the temperature, redox properties and the coupling to their surrounding environment. 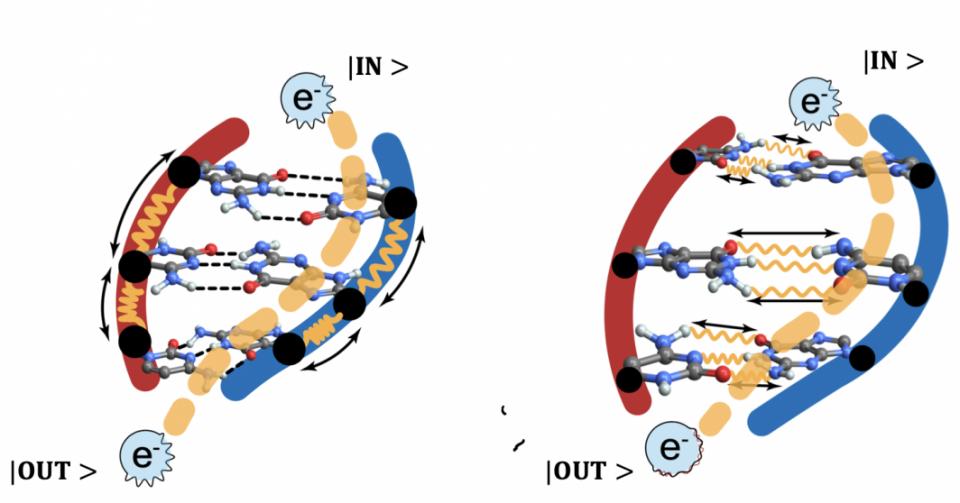 An electron transfer process with the electron-vibration (phonon) interaction. The process is essential to understanding and controlling charge and energy flow in various electronic, photonic and energy conversion devices — or, in this case, a biomolecule. The "IN" and "OUT" have either the same or distorted phase, depending on whether the transport is coherent or incoherent.

Taking life for a spin

A fundamental quantum electron property is spin. Electrons can be like spinning tops, rotating on their own axis.

Mujica explains that because electrons are charged particles, "this rotation creates a magnetic moment, which only has two components; one component aligns in the direction of transport and the other component is aligned in the opposite direction to transport.

"As they tunnel through chiral organic molecules, they have a preferential orientation due to the spin orbit interaction and the loss of time-inversion symmetry.”

This is known as spin polarization.

It turns out, when electron spin is polarized, electrons can tunnel much easier and farther because one of the two spin components has a larger transmission probability.

Mujica likens it to a bullet going through the barrel of a gun. The first guns that were ever made all had smooth, hollowed-out barrels. But when grooves were etched, it gave the bullet a spin that allowed it to travel straighter and farther. Also, it is easy to understand with this simple analogy that bullets rotating clockwise will not go through counter-clockwise designed barrels, and vice versa. A classical  analogy to what happens with electron spins.

And so, for their second set of experiments, they will use magnetic substrates, nanoscale chemical patterning, and multimodal spin-polarized scanning tunneling microscopy and spectroscopies with oriented enantiomeric pairs of DNA and intercalated metals to elucidate and to quantify the molecular and interface contributions to chirality-induced spin selectivity.

The importance of quantum particle-wave duality

Finally, electrons have a dual particle-wave quantum nature; they have particle-like properties such as mass and charge, but their dynamics and propagation follows the rules of wave quantum mechanics.

In biology, as the electrons encounter other molecules or molecular barriers like cell membranes, they are scattered, and their wave properties are modified. Two wave sources are coherent if their frequency and waveform are identical. If not, the waves can be canceled or enhanced due to interference. This interference can be destructive and leads to noise, which can also be due to thermal interactions.

“Spin coherence can coexist with spin polarization” Mujica said. “What it means is that you have in-phase transport, so you're not reducing the intensity of the wave, and we're not changing the phase of a wave associated to that transfer.”

Spin coherence is intimately associated to another quantum process, entanglement, that is of fundamental importance in quantum information and quantum computing.

Mujica says this is a high-risk, high-reward project that may upset the current conventional wisdom in quantum biology.

“I mean, the common knowledge was that you couldn't have coherence in a quantum biological system, because the environmental effects would destroy coherence in a very short time.”

They will try to put it all together by determining how chirality influences the electronic, vibrational and spin-polarized electron transfer from electron donors to acceptor sites as spin-coherent electron pairs are generated in photo-induced electron transfer reactions.

“Essentially, the grant focuses on the role of spin-polarized electrons and how it influences the behavior of biological systems, especially the length and temperature dependence, and how spin polarization and spin coherence can coexist,” Mujica said. “These are key unsolved issues in biological electron-transfer reactions.”

In addition to studying the unexplored roles of spin coherence in quantum biology, Mujica’s team will study how it can coexist with spin polarization and how, or if, it can create what is referred to as the spooky "action at a distance," or quantum entangled states.

The overarching Keck grant goal is to answer these questions, and the contributions of three key ingredients: tunneling, spin and coherence. These are central to discovering the underpinnings of the emerging field of quantum biology.

By exploring these questions, Mujica’s team ultimately hopes to use the Keck grant as a catalyst to create an ASU center for quantum biology, and further down the road, practical applications, such as quantum information and computing. All this could help position ASU in quantum technologies and information efforts, which are of strategic importance for the U.S.

“If we can provide enough evidence, we hope to unveil some very important questions that will be crucial for an ASU effort in quantum information sciences, and this is something that we are starting with efforts in engineering and physics,” Mujica said.

“We want to weigh in on the roadmap to be able to use molecules for quantum information. From our perspective, we really think of this as a step in the direction of defining our capabilities of using quantum biology in molecular quantum information sciences, a field that is experiencing a true renaissance.”

No. 25 Sun Devils Continue League Play With Visit to Oregon

The Sun Devils, back in the top-25 rankings this week, will look to make it five straight wins against the league-rival Ducks. ...

No. 25 Sun Devils Continue League Play With Visit to Oregon The Sun Devils, back in the top-25 rankings this week, will look to make it five straight wins against the league-rival Ducks.