A look inside the 10th Annual March Mammal Madness tournament

Nearly 10 years ago, anthropologist Katie Hinde was sitting in her lab on a Friday afternoon and posted an impromptu video to her blog to hype a simulated animal battle tournament.

Hinde, an associate professor at the School of Human Evolution and Social Change at Arizona State University, thought maybe some friends and her mother would read it. She was wrong. The March Mammal Madness tournament has four divisions: Mammal Collectives, Wild North America, Queens of the Sea and Sky, and Why Not Both? Players have until March 14 to research the animals, fill out their bracket and pick their winners. Download Full Image

“I tossed it up and people were super into it, to the point where I was actually scheduled for spring break to go to the Kalahari and pilot work with meerkats,” Hinde said. “And all of a sudden, I had this group of people that want me to tell them about what was going on with animal battles.”

Fast forward to 2022, and those initial blog posts, conversations and tweets have turned into an annual tournament that attracts people around the world to play, including thousands of educators and over half a million students this year alone.

In February, Hinde was joined by ASU Library scholarly communication librarian Anali Maughan Perry for a Community Conversation to talk about the 2022 March Mammal Madness (MMM) tournament. Over 175 people attended the online conversation. The audience was filled with first-time MMM players and seasoned educators who use the tournament each year to reach students from elementary to high school and beyond.

Modeled after NCAA March Madness basketball, the 2022 bracket is now live and includes four divisions. Each division has its own unique story and strategy: Mammal Collectives; Wild North America; Queens of the Sea and Sky; and Why Not Both? Going beyond just mammals, the tournament features an Arctic tern and Macaroni penguin, to orcas and swordfish.

Players have until March 14 to research the animals, fill out their bracket and pick their winners.

Community Conversations: A Look Inside the Annual March Madness tournament, recorded on Feb. 24.

A home for the tournament

“For educators, all of these sources have been selected and curated by other librarians here at ASU, as well as some suggestions from teachers,” Perry said. “And so there are going to be good places to go to get some reliable and free information. We also have academic information resources, which is kind of geared more towards the college-age, professional researcher section, or audience.”

“One of the really great things about the LibGuide is it has the dot-edu URL. So it doesn't tend to get blocked by schools that might have safety measures on student use of computers,” Hinde said.

“This curation of reliable, well-sourced factual information about not just the animals in the tournament, but animals all over the world, is a really great place to get students used to understanding the ways in which libraries aren't just repositories of knowledge, but curators of information, and can be really valuable for doing research and finding things,” Hinde said.

Everyone’s strategy is different, but it comes down to using scientific evidence and storytelling.

“You can just go off your gut and choose who’s cutest. You can pick whoever you want, but there are going to be some creatures you might not know what they are. If you want to know about the specific species, you can use the LibGuide resources to research animal background Information,” Perry said.

As the tournament has grown, so have the needs of the community. The MMM Library Guide, or “LibGuide” for short, has become the official home of the tournament, supported by the ASU Library’s KEEP Institutional Repository to share and archive educational materials, research and other resources created by the MMM team.

All past tournament results and play-by-plays are located on the MMM LibGuide. The MMM team, which includes nearly 50 educators, scientists, artists, librarians and other individuals who voluntarily contribute their time and expertise presents an empirical story about what could happen in these battles.

What would an olive sea snake and a hagfish do if they encountered each other in the ecosystems that they live in? They may fight, but they may not. Outcomes are predicted by scientists, and it’s a different story every time there is a match-up.

The story is live-tweeted in real time on Twitter at @2022MMMletsgo. In the Twitter posts, there are links to videos, including images and alt text for people using screen readers. Results are posted on Twitter and then Facebook and the ASU Library results page. 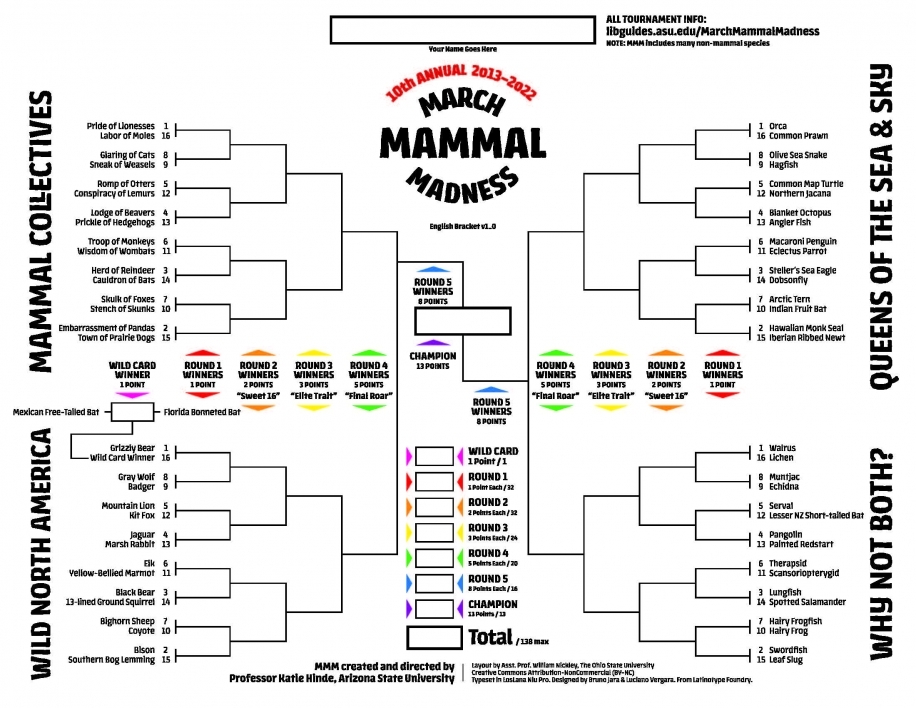 What’s the secret to being an MMM champion?

All of the MMM materials can be used in many ways. For high school ages and up, take a chance and try filling out the entire bracket at once. For younger students, strategies include a reset after the first two rounds to help keep children engaged.

The biggest takeaway from playing MMM?

“If you are learning, you're winning," Hinde said. "Even when we make mistakes, even when we fall down, even when we don't do things that are just as we want them to be, we learn something from that. And if we take that learning to heart, if we grow from it, then we're winning.”

Bookmark the MMM LibGuide and fill out your bracket today.

Al Roker, the Emmy Award-winning weatherman and popular anchor for NBC News’ "Today," reflected on his career, his experiences with racism in the newsroom and the continued evolution of journalism and weathercasting as he accepted the 38th annual Walter Cronkite Award for Excellence in Journalism presented by Arizona State University’s Walter Cronkite School of Journalism and Mass Communicatio... 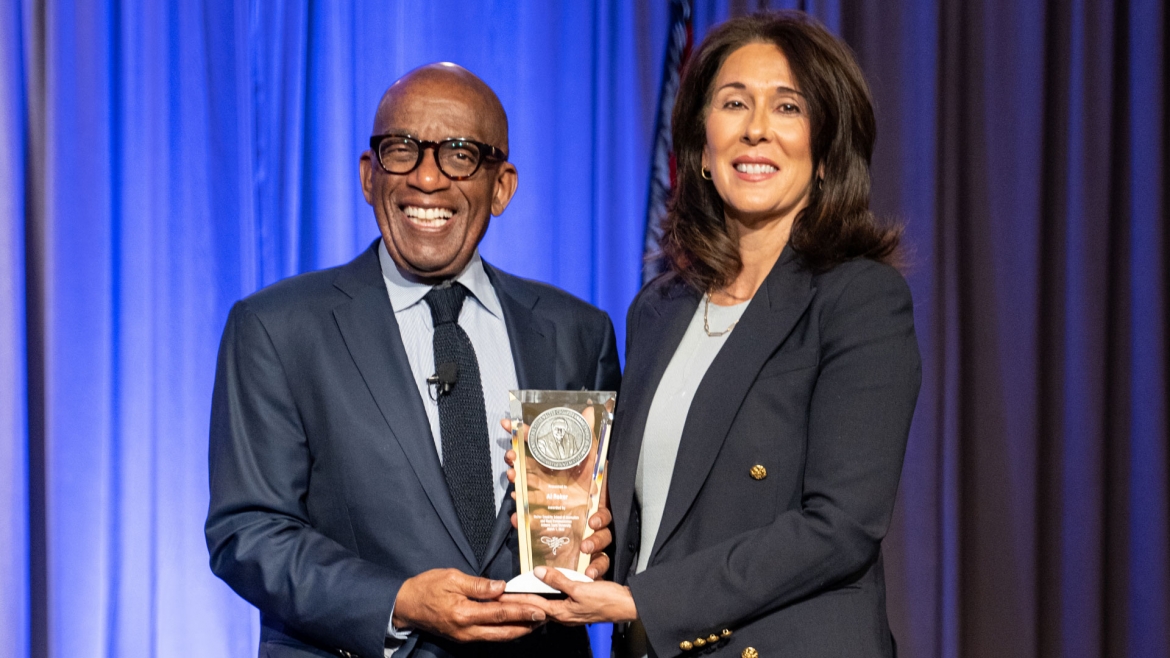 Al Roker, the Emmy Award-winning weatherman and popular anchor for NBC News’ "Today," reflected on his career, his experiences with racism in the newsroom and the continued evolution of journalism and weathercasting as he accepted the 38th annual Walter Cronkite Award for Excellence in Journalism presented by Arizona State University’s Walter Cronkite School of Journalism and Mass Communication.

ASU Executive Vice President and University Provost Nancy Gonzales presented Roker with the award Tuesday in front of 900 supporters at the first in-person awards luncheon since 2019.

During an acceptance speech filled with humor, Roker recalled his time as a child watching Walter Cronkite on "CBS Evening News," as well as other influences such as Chet Huntley, David Brinkley and Frank Reynolds.

“It was a time when a newscast and its anchor could sway opinion without giving an opinion,” Roker said.

The luncheon also featured the official launching of the Cronkite School’s new brand elevation campaign, #CronkiteGlobal. The initiative will aim to amplify the school's existing Cronkite Global Initiatives programs, connect with the school’s 14,000 alums and promote its newest program, CronkitePro, which will address the training needs of journalism and communications professionals, and their companies.

#CronkiteGlobal also includes the Cronkite Pledge, which calls on journalists, communicators and students to uphold their shared values and give power to those who seek to become advocates and more connected to the world.

The Cronkite School also recognized the first-place winners of 2020–21 Shaufler Prize in Journalism: Toluse Olorunnipa and Griff Witte of The Washington Post.

Roker reminisced on the start of his television news career, which began in 1974 when he worked as a weathercaster in Syracuse, New York, while he was still a sophomore at the State University of New York at Oswego.

After graduating from SUNY Oswego, he moved to Washington, D.C., where he met “Today” show weathercaster Willard Scott, whom he described as the man who would have “the most profound influence” on his career.

“He told me to always be yourself. No matter what anyone does or says, nobody can take that from you. And no matter how successful you are at other jobs, never forget your day job,” he said.

He was the first Black weathercaster in each of the cities where he worked until he moved to New York City in 1983, he said.

Roker described his experiences with racism, including a time when a local news anchor made a racist comment to him after the anchor was accosted by a homeless person.

“As you climb the ladder, you run into obstacles. Like racism. Some overt, some subtle — some so crazy, you almost have to laugh,” he said.

“Those decisions are made in the front offices, and the only way change gets made is when there is change in those very front offices,” he said.

Roker ended his speech by describing the evolution of journalism and weathercasting, and how increased technology has challenged journalists to adapt to the changing needs of the audience.

He called on reporters to be “truth tellers” while borrowing a famous line that Cronkite used on his newscasts.

“The challenges are there. Are we up to those challenges? I say we are. We have to be,” he said. “Because, ladies and gentleman, that’s the way it is.”

All of the funds raised from the luncheon support the Cronkite Award for Excellence in Journalism fund, which supports future generations of journalism and media professionals.