Dichotomy nationalism vs. globalism under the microscope this fall

Over the last decade, we have followed the rise of nationalism in the United States, the Brexit vote in the United Kingdom, growing dissatisfaction with immigration policies in Europe, other evidence of increased attention to national pride, and topics such as economic and political protectionism.

The "globalist-nationalist" divide is now central to political discourse across liberal democracies. “Some argue it has become the most important political axis, overriding the more traditional left-right division,” said Trevor Shelley, instructor and the assistant director of graduate studies in the School of Civic and Economic Thought and Leadership at Arizona State University.

To understand the political, philosophical and economical forces driving this polarization, ASU students can take CEL 494 Globalism, Nationalism and Citizenship, offered by the School of Civic and Economic Thought and Leadership and taught by Shelley.

“In this course, I invite students to consider that the globalist-nationalist divide of our times is but a species of a much larger genus of problem, and so of a tension between particular and universal forms of community as old as political life itself,” Shelley said.

The course is available to students of all majors and minors on Mondays and Wednesdays, from 4:30 to 5:45 p.m. in Tempe.

Trevor Shelley, instructor and assistant director of Graduate Studies at the School of Civic and Economic Thought and Leadership

Students will focus on important debates regarding globalization, the nation and varieties of citizenship.

“Situating present debates into a much broader historical and theoretical context, students will better understand the underlying premises and motivations for the opposing views, and reflect on how they as citizens might best navigate this apparently intractable tension of the human political condition,” Shelley said.

In light of this textual variety covering a vast historical span, students will participate in discussions about the philosophical, political, economic and strategic aspects regarding America's role and position in a globalized world. These discussions will provide them with rich insight into the duties and responsibilities of citizens, policymakers and legislators in the present globalist-nationalist context.

Through a variety of interdisciplinary approaches and texts in political philosophy and history, students will read works in sociology, constitutionalism, economics and literature.

“This course is particularly relevant to those pursuing careers in law, business, social sciences and teaching, as well as those in the public and private sectors who appreciate multimodal approaches to a problem,” Shelley said. “This learning experience improves their facility to move between different methods and discourses. Students will also be exposed to multiple perspectives, with texts by authors from a variety of backgrounds — American, French, English, Spanish, Israeli, Indian and Ghanian, among others.”

Based on these readings, they will articulate their own views and test them against those of their peers in civil dialogue and disagreement with one another.

This style of debate over a complex series of problems helps to cultivate the virtue of moderation.

— Trevor Shelley, instructor and assistant director of graduate studies in the School of Civic and Economic Thought and Leadership

Taught in the Socratic method, which invites students to engage in the discussions, the course will focus on sources of political authority, ideas of membership in a political community, the relationship between reason and religion in a polity, constitutionalism, and natural or human rights. 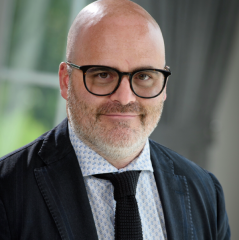 “This style of debate over a complex series of problems helps to cultivate the virtue of moderation," Shelley said.

“By going beyond apparent cliches about ‘globalists’ and ‘nationalists,’ we can better grasp what is at stake and why the parties are as charged as they are about the issues, so that each of us may in turn adjudicate the passions of our fellows as citizen-leaders."

Shelley is the author of various articles and book chapters, including “Globalization and Liberalism: Montesquieu, Tocqueville, and Manent” (Notre Dame University Press, 2020). He is co-editor (with Carol McNamara) and contributor to the forthcoming collection “Citizenship and Civic Leadership in America” (Lexington Press, 2022).

Globalism, Nationalism and Citizenship integrates the fall 2022 list of courses offered by the School of Civic and Economic Thought and Leadership, an academic unit of The College of Liberal Arts and Sciences.

The school combines philosophy, history, economics and political science to examine great ideas and solve contemporary problems. Courses such as Comparative Political Thought; Debating Capitalism; and Politics and Leadership in the Age of Revolutions: 1776–1826 prepare students for careers in business, law, business, public office, philanthropy, teaching and journalism, among others. Arizona State University has reached out to offer its support to its community as the war continues in Ukraine.

“Arizona State University is dedicated to advancing student success, global engagement and service to others, and we stand ready to support our extended university community with assistance and expertise as the conflict in Ukraine unfolds,” ASU President Michael M. Crow said. “Education contributes profoundly to the health of democracies by producing both thinkers and leaders, and in that spirit, we will continue to share our collective knowledge and care as opportunities arise.”

The university has several dozen international students from Ukraine. The International Students and Scholars Center has reached out to them individually to see if they need additional support.

“The entire academic community extends our care and resources to students who have been directly impacted by the conflict in Ukraine,” said Nancy Gonzales, ASU executive vice president and university provost. “I strongly encourage any student or scholar who is experiencing stress, anxiety, financial or academic strain related to the Ukraine conflict to contact our Dean of Students Office and International Students and Scholars Center so that we can get you the help you need. Our teams have been working closely with those impacted and will continue to do so.”

ASU also now has ties in the country with the new American University Kyiv (AUK), which has just opened its doors. Future students there will follow a curriculum powered by ASU for a high-quality education in high-demand fields. AUK will soon welcome its first students in its master's and bachelor's degree programs in digital technologies, including computer and software engineering. It will add programs in business and global management in September, with more offerings to come in the next few years.

AUK is the newest university to join the Cintana Alliance, an international network of universities working to develop academic programs that respond to the global demand for postsecondary degrees. As part of the network, AUK faculty have access to ASU’s online curriculum and expertise in digital learning, insights into how to build world-class research programs, and articulation agreements that enable students to earn an ASU credential or degree.

ASU also has a footprint in the region through the Melikian Center for Russian, Eurasian and East European Studies, which advances use-inspired research and teaching on the languages, societies and geopolitics of greater Eurasia. The center’s core mission is to enhance contextual expertise and cultural awareness in the communities it serves, through partnerships across disciplinary, ideological and geographical borders.