Professor hopes to extend pilot program to vets in Valley

It was early January when the three students in Arizona State University's Veterans Imagination Project pilot program got together to talk about the first week of class. What, they wondered, had they gotten themselves into?

“We all met up outside and said, ‘What the hell is going on? What are we talking about?’” said Erik Villegas, who spent five years in the Marines, about himself and fellow students Brian Neal and Nick Davies.

Seven weeks later, the students, all of whom are in the Pat Tillman Veterans Center as well, are no longer puzzled. The new initiative from the Center for Science and the Imagination and Office for Veteran and Military Academic Engagement has helped clarify their future in ways they never would have imagined.

“Thinking about the future is not something that’s new to me, but this course really gave me the tools and the framing and the ways to go about doing it with guidance,” said Neal, who served in the Navy for almost 10 years. “This class is definitely a toolset that has been overlooked and ignored.”

That’s what Beard, program manager for the Center for Science and the Imagination, was thinking several years ago when he was helping companies imagine what their work environment might look like in the next 10 to 20 years.

Beard believed veterans could use the same guidance. He said that while the military expertly prepares young men and women for the job they’re trained to do, it is “perhaps less concerned” about what they’ll do in the next phase of their lives. He noted that his transition class out of the Marines, where he served from 1995 to 1999, was 2 1/2 days — “less time than a long weekend.”

With this class, they can imagine a different future for themselves.

“What we’re talking about is how we’re going to live in the future amid radical change,” Beard said. “We’re training organizations to think about the changes that are on the horizon, so they have sort of a better playbook to have a preferred future. With military veterans, that radical change happens as soon as they get out of the military. They don’t have 10 or 20 years to rehearse for the futures they want. Without having skills in future thinking or foresight or any of these skills these huge Fortune 500 companies use, military members are left feeling sort of adrift.

“So, we thought this was a really good experiment to see if the methods that we use for future thinking and imagination can be applied on a personal level, not just an organizational level.”

Before even taking the class, Davies innately understood the need for it. He was in the Marines for almost five years as a machine gunner and said that unless a military occupation connects to a job in the civilian world, veterans often find themselves taking blue-collar jobs.

“That’s what a lot of my friends have done,” Davies said. “With this class, they can imagine a different future for themselves.”

One of the key components of the class is trendspotting — predicting trends before they hit the mainstream. Trendspotting helped the students understand what their desired occupation might look like in 10 to 20 years. That, in turn, aided the students in determining whether they wanted to follow through with their original career choice.

For example, Villegas long has desired to be a federal agent with the Drug Enforcement Agency. But when he told Beard of his plans the second week of class, Beard asked him what the DEA might look like in 10 to 20 years. Villegas said he had no idea.

That led to discussions about how an agent’s job would change if federal legislation to legalize marijuana was approved. Instead of, as Beard put it, “kicking down doors,” an agent’s responsibility might shift to auditing commercial marijuana growth houses. “He (Villegas) was like, ‘That’s a much different role than I would have anticipated before taking this class,’” Beard said.

In addition to using exercises such as trendspotting, the students were required to speak with a mentor in order to get a better sense of changes occurring or about to occur in their chosen field. Neal, who is getting his degree in engineering management with a minor in sustainability, spoke to Braden Allenby, a President’s Professor and Lincoln Professor of Engineering and Ethics in the School of Sustainable Engineering and the Built Environment in the Ira A. Fulton Schools of Engineering.

Their conversations helped Neal understand that as the automobile industry moves away from fossil fuels and toward electric cars, lithium — which powers electric vehicles — would be in greater demand. After some research, Neal found that Nevada has the largest lithium deposit in the country.

“I thought, ‘Well, they’re going to need somebody like me to tell them how they’re affecting the environment around them,’” Neal said.

The final piece of the class was a visual storytelling exercise. The students were put in touch with Hollywood concept artist Ray Lopez, who asked detailed and specific questions about their future career, such as: What does your workspace look like? What are the items around you in that space? How is your personal history reflected in your environment?

With that information, Lopez produced a piece of keyframe art, an electronic illustration of their story.

“They’ve gone from this level of uncertainty to, ‘I’m going to tell you exactly what this environment looks like to me,’” Beard said. “That final piece of art is the crystallization of everything they’ve done in this process.”

“This class did a lot for me," Davies said. "It was instrumental in understanding how my future could look and how I can impact that." 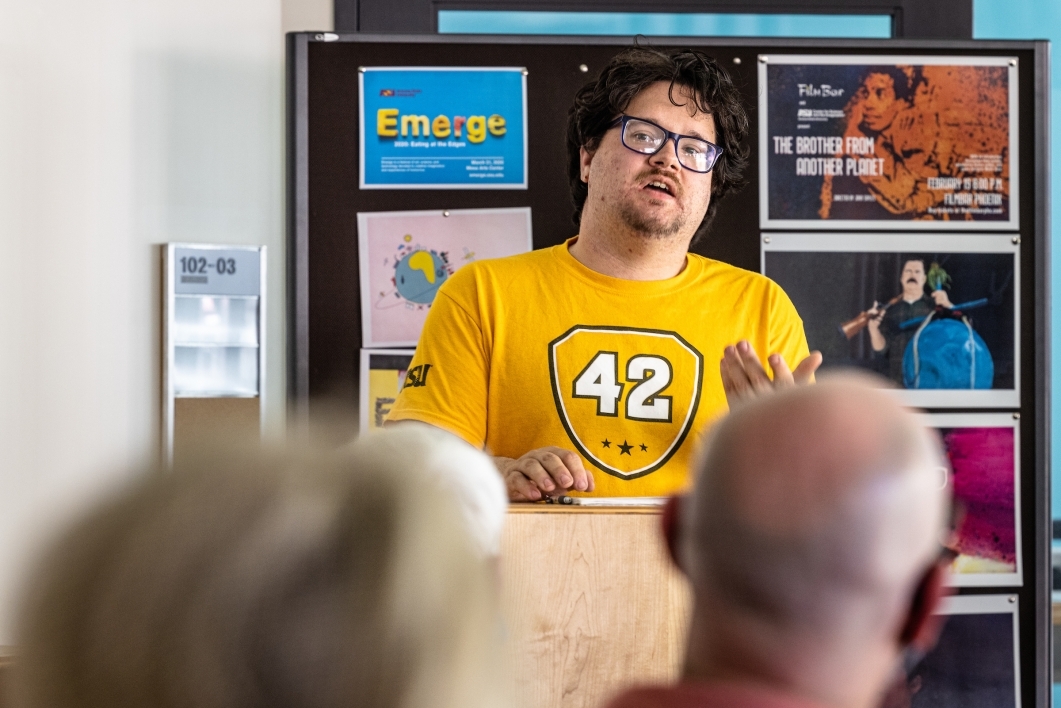 Fourth-year engineering management student Brian Neal speaks about his experience in the inaugural cohort of the Veterans Imagination Project on Friday, Feb. 25. Neal said he imagines himself dealing with environmental concerns in the lithium mining industry. 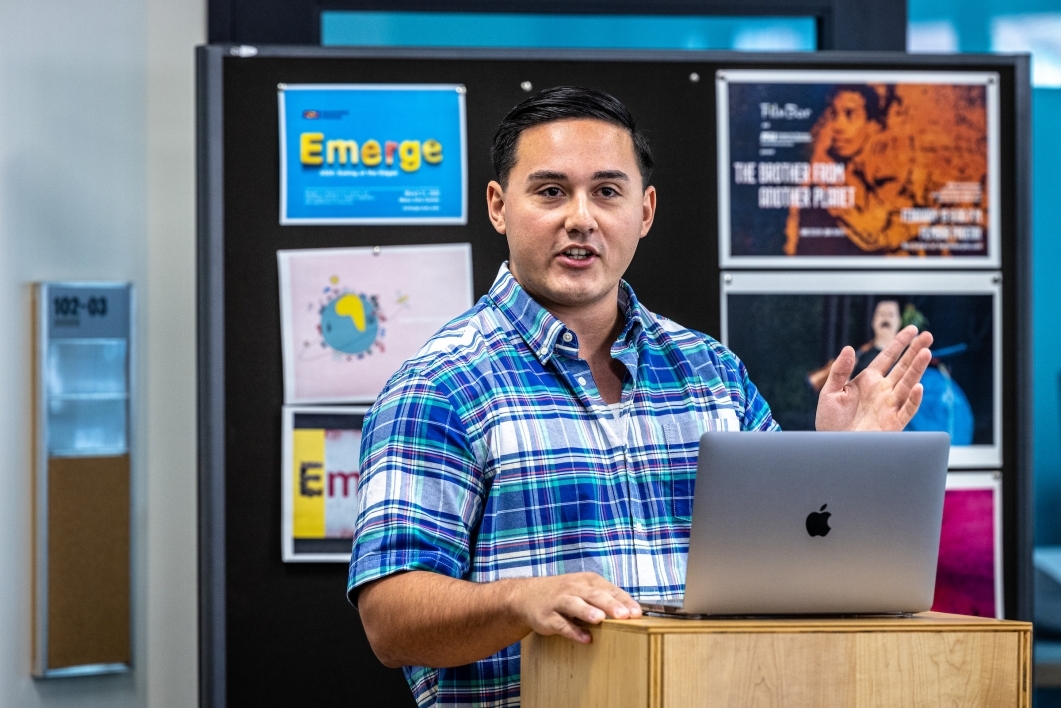 Fourth-year public service and public policy student Erik Villegas said he imagines himself working for the DEA dealing with restrictions and regulations on future legalization of marijuana and other controlled substances. 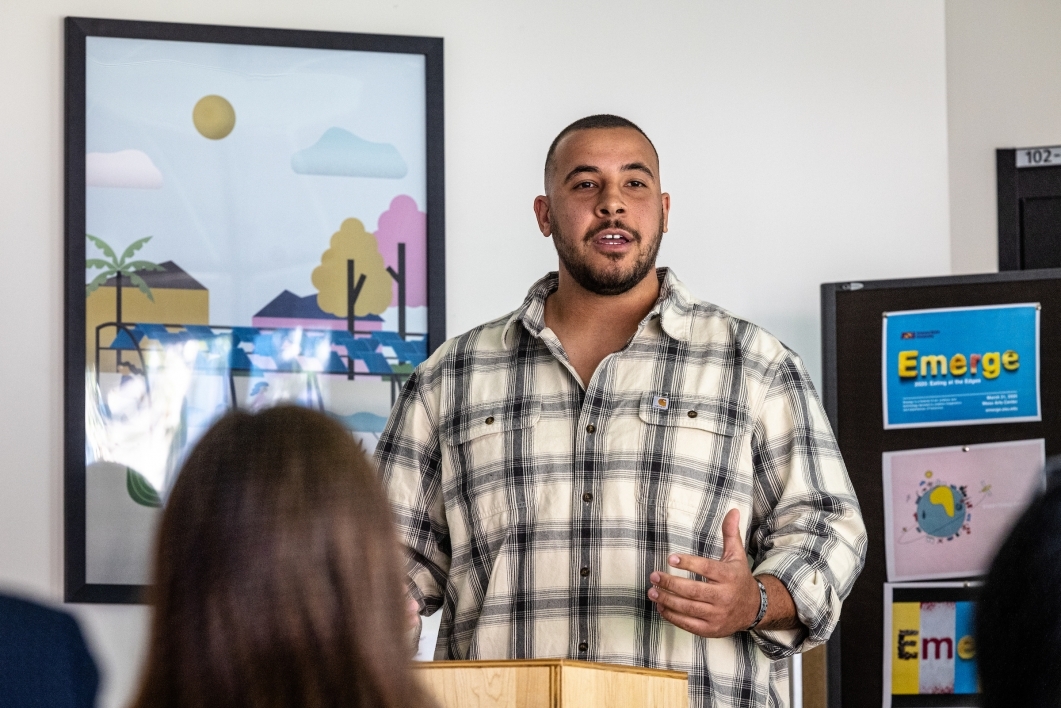 Second-year business and global policies student Nick Davies said he imagines himself serving with the State Department, attending hologram-based meetings that will allow attendees to visit embassies and other locales.

Beard hopes to extend the pilot program to other veterans at ASU and, with funding, offer it to veterans around the Valley.

“Everybody has a right to imagine their future," Beard said. "For those who don’t know what their next step is, this could be a very powerful tool for their toolkit, whether they decide to come to ASU or not. We can use the resources we’ve pioneered at ASU and the faculty and the expertise at ASU to really impact the lives of veterans in our community."

Top photo: California artist Ray Lopez created artwork for second-year business and global policies student Nick Davies of the inaugural cohort of three student veterans at the Veterans Imagination Project at the ASU Center for Science and the Imagination, Friday, Feb. 25. Davies imagines himself serving with the State Department, attending hologram-based meetings, which will allow attendees to visit embassies and other locales. Photo by Charlie Leight/ASU News

Calynne Rosholt holds the overall lead and the Sun Devils sit in second place heading into the final day. ... Calynne Rosholt holds the overall lead and the Sun Devils sit in second place heading into the final day.