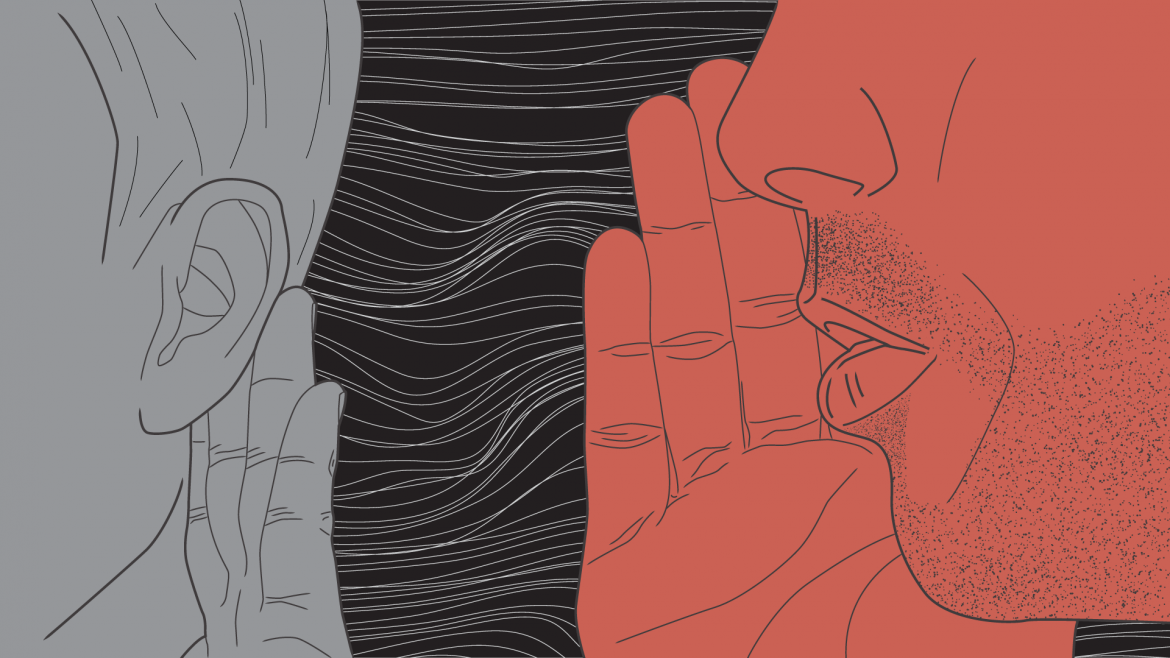 'Did you hear what he did?' Why people divulge other people's secrets

Secrets — those dastardly details you confide in another person that come back to haunt you — are a social phenomenon among humans. Some would say it’s part of our social fabric, to talk about others, to gossip, to divulge another person’s deepest secret.

But when, and maybe more importantly, why, would someone divulge another person’s secret to others?

According to a new study by researchers at Arizona State University and Columbia University, the divulging of a secret has a direct correlation to a person’s morals. It seems that when someone learns another person’s secret that breaks their own moral code, the person who was confided in is willing to divulge that secret to “punish” the secret holder, according to Jessica Salerno, an associate professor of psychology in the School of Social and Behavioral Sciences at ASU.

“Keeping things about ourselves secret is burdensome and has a negative impact on our relationships and our health,” Salerno said. “Confiding in others is important, but we assume that the people we confide in have similar motivations to keep the information quiet as we do to protect us and prevent us from being punished for that secret behavior. Yet, our discovery is that it’s not just that people often don’t keep our secrets, but they may be inclined to actively reveal the secret to see us punished when they think the secret behavior is immoral.”

The research, which is based on a series of nine studies that asks participants how often they decide it is appropriate to reveal someone else’s secrets and what their motivations were behind those decisions, is published in the early online issue of the Journal of Personality and Social Psychology.

In “Morality, Punishment and Revealing Other People’s Secrets,” Salerno and her co-author, Michael Slepian of Columbia University, found a consistent trend in how often secrets were divulged and some of the motivations as to why they were divulged.

“Across a wide variety of commonly kept secrets — ranging from being unhappy at work to sexual infidelity — people revealed other people’s secrets 30% of the time on average,” Salerno said. “When we specified that we only wanted to know about secrets that were directly confided in our participants by someone close to them, we expected this percentage to drop a lot, but it didn’t; people still revealed 26% of other people’s secrets that had been directly confided in them.

“This means that the majority of secrets were kept, but a meaningful percentage, that some might consider horrifying when they consider their own confided secrets, were revealed to at least one other person."

“Across many studies and situations, people were significantly more likely to reveal someone else’s secret if they considered the secret to be an immoral behavior,” she explained. “And we found out why: People are more likely to reveal other people’s secrets that they think are immoral because it satisfies a (perhaps unconscious) emotional need to see that person punished for the morally outraging secret behavior.”

This motivation to reveal information as punishment appears to be limited to the realm of secret information.

“So, this phenomenon of being more likely to reveal someone else’s immoral behavior to punish them is something specific to secrets — if the information is public, it is driven more by a desire to gossip."

So why even confide in another person if you know your secret could be damaging?

While people generally keep their own misdeeds quiet to avoid punishment and reputational damage, Salerno said confiding in someone provides a relief to the secret holder.

“Keeping secrets leads to social isolation, stress, damage to relationships and health problems,” she explained. “People might reveal the secret to others to avoid these negative consequences, or also to feel close to the confidant, ask advice, or to receive social support. Being able to confide secret — including those that are immoral — is important for people’s relationships and mental health, which is why it is important to know how to choose those confidants wisely.”

A team of scientists from Arizona State University has taken a significant step closer to unlocking the secrets of photosynthesis, by determining the structure of a very large photosynthetic supercomplex in mosses. This important discovery is laid out in their paper just published in Nature Plants. The paper is titled "The structure of the Physcomitrium patens photosystem I reveals a unique L...

A team of scientists from Arizona State University has taken a significant step closer to unlocking the secrets of photosynthesis, by determining the structure of a very large photosynthetic supercomplex in mosses.

This important discovery is laid out in their paper just published in Nature Plants. The paper is titled "The structure of the Physcomitrium patens photosystem I reveals a unique Lhca2a paralogue replacing Lhca4." 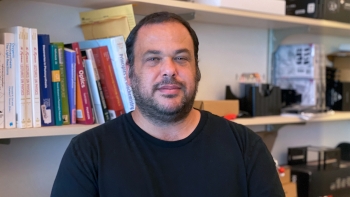 Yuval Mazor is an assistant professor in the School of Molecular Sciences and the Biodesign Institute at ASU. Photo by Mary Zhu/ASU Download Full Image

“This structure is a major breakthrough in tracing the evolutionary path of photosystems and their antennae along the green lineage leading to modern-day plants,” said Yuval Mazor, the paper’s senior author and an assistant professor in the School of Molecular Sciences and the Biodesign Institute’s  Center for Applied Structural Discovery.

Oxygenic photosynthesis, responsible for the biosphere as we know it today, evolved in cyanobacteria 2.5 billion years ago.

The incorporation of cyanobacteria into a non-photosynthetic eukaryotic cell established the green lineage of photosynthetic organisms leading to higher plants close to 1.5 billion years ago. About 450 million years ago, the ancestors of present-day plants began colonizing dry land, making moss the best representative of this evolutionary process.

The transition from a marine to a terrestrial environment brought with it a large increase in light intensity and desiccation without the shielding effects of water. These environmental changes resulted in adaptations in the photosynthetic machinery of the first land colonizers. Most of the adaptations in the light reactions occurred as different antennae systems evolved to change light harvesting and photoprotection pathways.

"Mosses are a basal member of the plant family tree and represent a unique period of plant evolution,” said Chris Gorski, graduate student and one of three first authors on the paper. “Our work sheds light on the adaptations made to light harvesting and photosystem I composition by some of these early plant ancestors after the transition from a marine environment to a harsher terrestrial one." 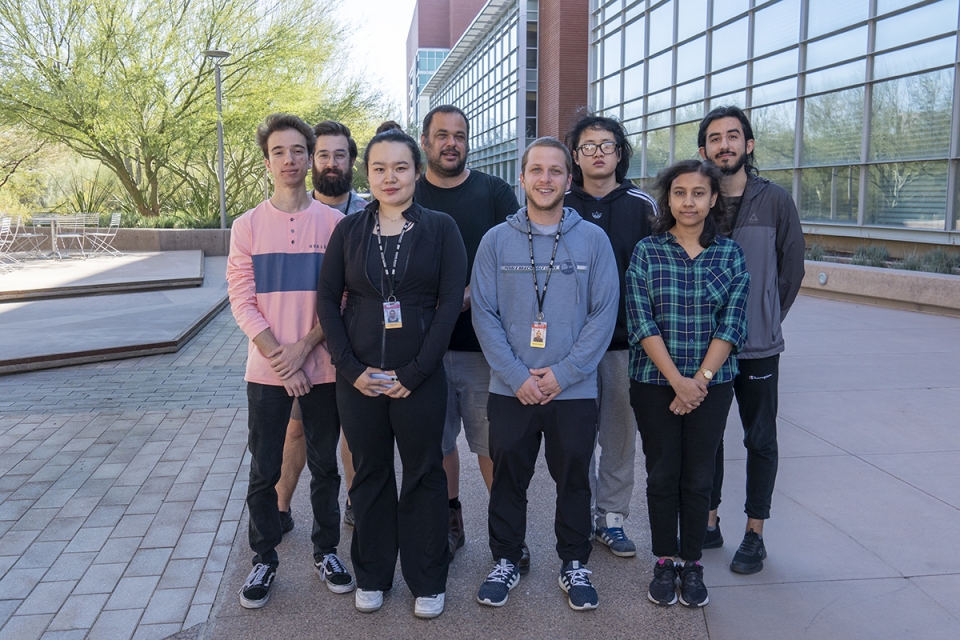 As stated, mosses are important as a stepping stone to land adaptation as part of the evolution of vascular, flowering plants. Mosses can live on dry land as well as in aquatic environments. They don’t have the vascular tissues and embryos of higher plants but are multicellular and their life cycle is the basis for more “advanced” plants.

In this paper, Mazor and his team describe the cryogenic electron microscopy (cryo-EM) structure of the moss Photosystem I together with its LHCI antenna at 2.8 Å (an angstrom is a tenth of a nanometer, which in turn is a millionth of a millimeter) resolution and its peripheral antenna (called LHCI) in mosses.

This moss does not have Lhca4 genes but has a large number of similar genes. In the team’s structure, they were able to identify the specific gene replacing Lhca4. Because Lhca4 genes exist in organisms that predate mosses, they think this branch of mosses have lost their Lhca4 and replaced it with the newly identified gene (called lhca2b).

This is significant because it shows that the light absorption properties of LHCI (low energy chlorophylls absent or present) can change within a relatively short time. Mazor thinks this adaptation relates to the ability of mosses to maintain their ability to grow underwater where low energy light (red shifted) is scarce due to water column absorption.

In the past few years, single-particle cryo-EM in particular has triggered a revolution in structural biology and has become a newly dominant discipline. Cryo-EM allows researchers to take a look at biological structures that were simply not accessible just a few years ago, and is now exposing structures of unprecedented complexity in great detail.

Indeed, it is this technique utilized by the experts in the School of Molecular Sciences and The College of Liberal Arts and Sciences that has enabled the elucidation of the structure of the PSI in mosses.