On a dark, windy evening on Wallops Island, Virginia, this past fall, Maddy Kelley stood on the beach watching wind and sand pulse along the beach, driven by eddiescircular currents of water and illuminated by neon green lasers.

Kelley, a PhD student in Arizona State University’s School of Geographical Sciences and Urban Planning and a geomorphologist who works to quantify and predict the movement of sediment, was part of an international team of scientists and engineers, led by Christy Swann from the U.S. Naval Research Laboratory, conducting research to better understand the natural processes of sandy beach environments. 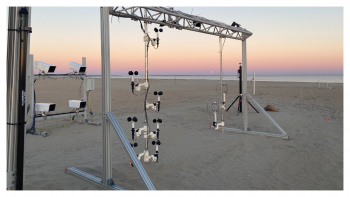 “Historically, it's pretty hard to image sand and wind at the same time; the wind on a beach can quickly change, and you have to be able to adapt to that,” said Kelley, who spent a month at a NASA field site working on the project. “We have a powerful laser that scatters visible light up as helium bubbles flowing in the wind and sand grains move through our measurement volume. The cameras can take images anywhere from 400 frames to 1,200 frames per second.”

The researchers aim to use the new images to unravel new understandings of the physics of turbulence and how sediment travels by wind. Ultimately, the research will provide valuable information for models on what may need to be done to preserve beach environments in the future. 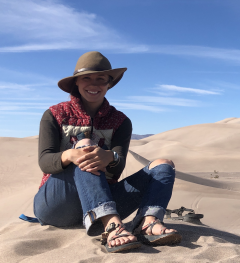 “Our coastal regions are extremely important and vulnerable to climate change. Without good data and models, these environments — and the humans that interact with them — are susceptible to wave inundation.”

The data was collected using a Particle Tracking Velocimetry (PTV) system that the team developed. The 4-by-3 meter metal-framed apparatus consists of lasers, high-speed cameras and traditional sensors measuring turbulence and wind-blown sand.

“Coming up with a system where our equipment can collect this data, shift to the changing conditions and not break has taken years of prototyping,” said Kelley, who noted that natural beach environments undergo chaotic changes in air pressure and wind velocity that cannot be replicated in controlled lab settings. “It combines traditional instruments that measure the wind and sand transport at different heights with a high-resolution imaging system.”

Current models studying how wind moves sand, or aeolian sediment transport, historically have performed poorly due in part to limitations of available instrumentation that can measure and incorporate natural boundary layer turbulence.

“We're trying to better understand the physics of windblown sand, and for the first time, we can visualize and quantify the relationship between turbulence and transport,” Kelley said. “We’ve proven that (our instrumentation) can work, we can get these high-resolution images in such a harsh environment, but there's still much more to do.” 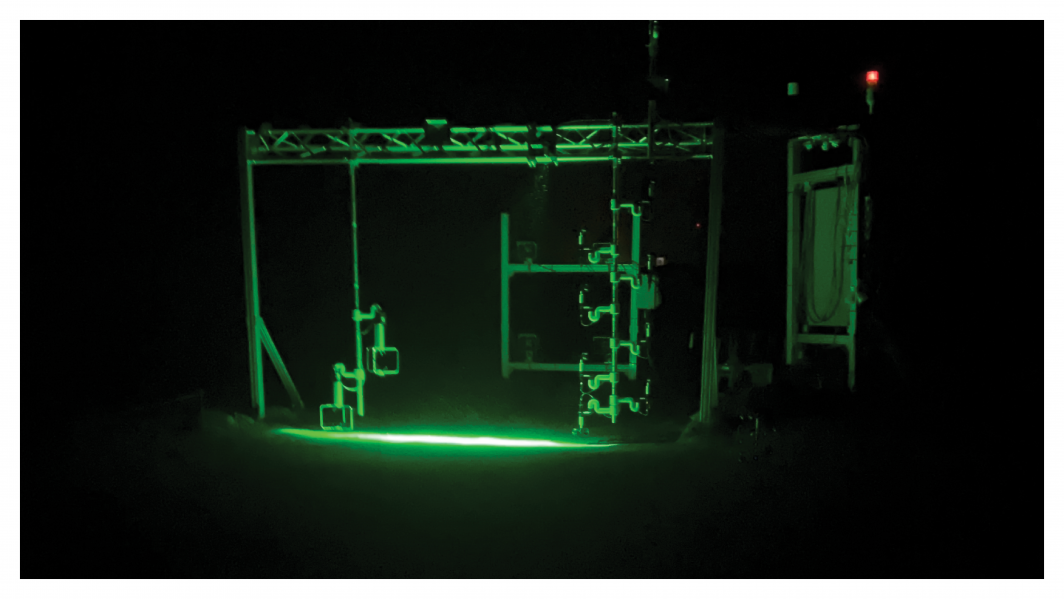 The Particle Tracking Velocimetry (PTV) system uses a powerful laser to scatter visible light up as helium bubbles flow in the wind and sand grains move. 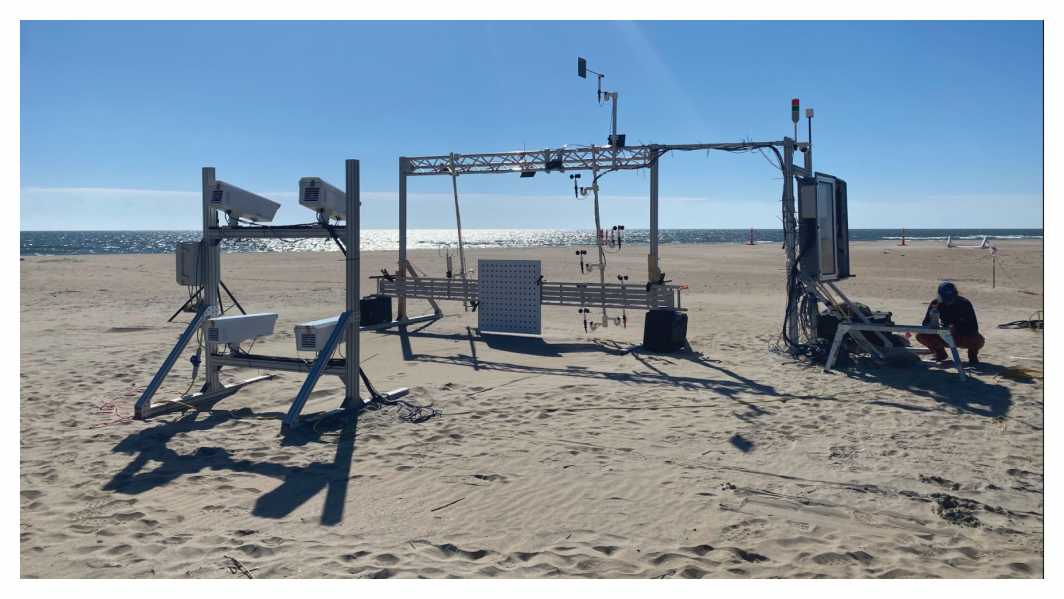 Frames of the PTV system capturing images of how the wind moves on a beach at NASA Wallops Flight Facility. 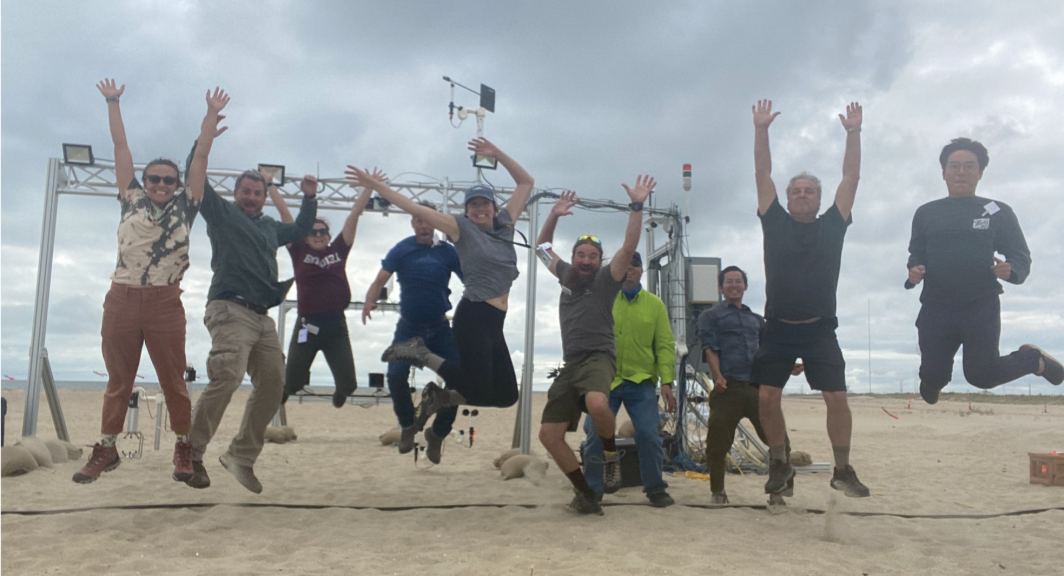 Kelley (far left), was part of the international team of scientists and engineers, led by Christy Swann from the U.S. Naval Research Laboratory, who captured the first high-resolution images of both sand and wind turbulence in natural terrain.

It’s 72 degrees on a beautiful Thursday morning as the students in Jose-Benito Rosales Chavez’s Urban Food Systems class gather at Spaces of Opportunity, a community garden near 12th Avenue and Baseline Road.The students are given a tour of the 19-acre urban farm, where local residents can buy a small plot of land for $5 a month to grow, maintain and then consume the food they nurture.The farm... 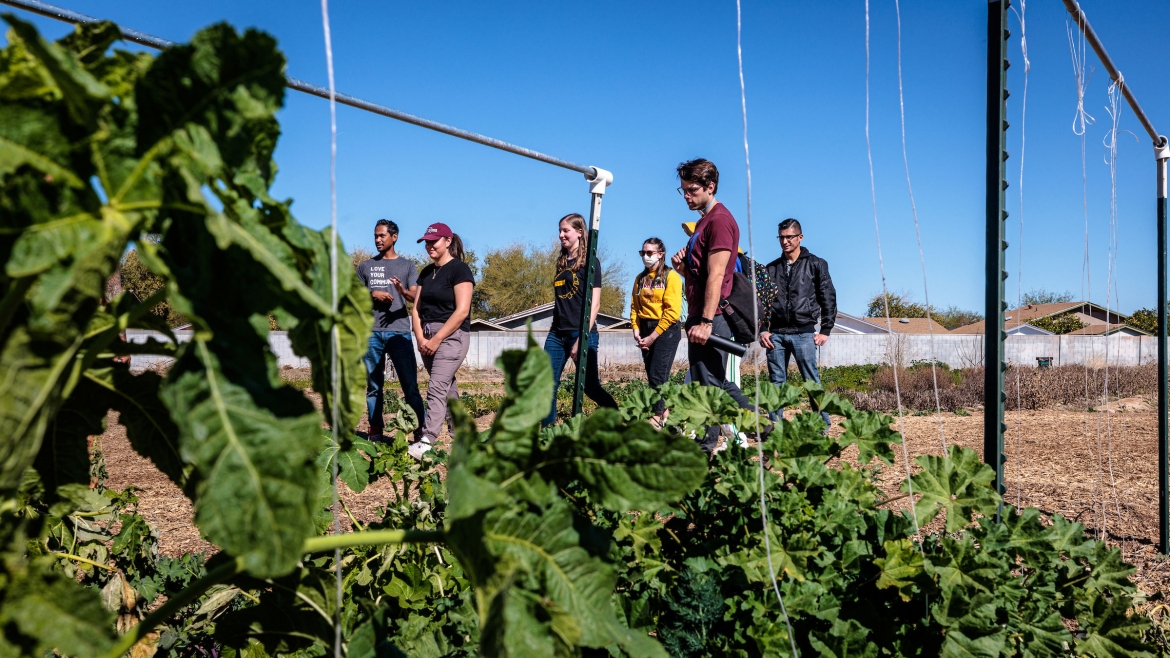 It’s 72 degrees on a beautiful Thursday morning as the students in Jose-Benito Rosales Chavez’s Urban Food Systems class gather at Spaces of Opportunity, a community garden near 12th Avenue and Baseline Road.

The students are given a tour of the 19-acre urban farm, where local residents can buy a small plot of land for $5 a month to grow, maintain and then consume the food they nurture.

The farm isn’t in the middle of nowhere; rather it’s an example of how community planning can help serve people in impoverished areas and why, after the class wasn’t taught for four years because the previous professor had retired, Rosales Chavez thought it was important to bring back to Arizona State University’s School of Geographical Sciences and Urban Planning.

“What I want students to learn from this class is we need to work on policies that are equitable so everybody can have access to healthy food,” said Rosales Chavez, who took the class as an ASU student. “And instead of relying on food from other places, we need to find a system that works in the heart of a city."

There’s little question that healthy, affordable and sustainable food sources are needed across the U.S. According to the United States Department of Agriculture’s most recent food access report, published in 2017, nearly 40 million people – 12.8% of the country’s population – were living in low income areas. Of that group, 19 million people had limited access to a grocery store. Also, another 1.6 million rural households in the U.S. don’t have access to a car and need transportation, thus limiting their food opportunities.

“Food deserts are a major issue when you go into certain (low income or rural) neighborhoods, and the larger national stores are not going to open there, and farmer’s markets are not going to open there, and food access is limited to either driving or getting on a transit and going quite a distance,” said Darin Hughes, a graduate student in the class who is getting his master’s degree in urban and environmental planning. “Seeing that dichotomy and understanding the failure of the environment that leads to those conditions was new to me and something I wanted to focus my attention on to an extent.”

For Rosales Chavez, building sustainable communities is not just good policy; it’s a passion born from his personal experience.

He grew up the son of a single mother in Michoacán, a state in western Mexico that has coastline along the Pacific Ocean. He and his mother had access to Mexico’s diverse food system, which included farmer’s markets, tianguis (flea markets), specialty stores, tortilla shops and family-owned dairy shops.

But in the two years before he and his mother moved to the U.S. in 2002, money became tight, thus limiting the access the family had to Mexico’s varied food supply.

“There was a point where all we ate was tortillas and beans,” Rosales Chavez said. “A local farmer would loan us milk, and we wouldn’t pay for one or two months. We lived in an environment that had plenty of food close to us, but we didn’t have the income to buy it.”

Rosales Chavez, then 14 years old, and his mom moved to a low income area in Las Vegas in 2002 and experienced the other side of the food supply conundrum. Thanks to federal government safety net programs, they had money to buy food, but the only stores near them were a convenience store and a grocery store that closed because it wasn’t making enough money.

“So it changed for us from not having an income to not having sources of food,” Rosales Chavez said.

Those experiences influenced Rosales Chavez’s choice for his dissertation, which was published in 2021. He wrote it in three parts. One part was published in the Public Health Nutrition journal and was titled “Availability, variety and distribution of healthy and unhealthy foods and beverages sold at street food stands in Mexico City.”

A second part was published in the Journal of Nutrition Education and Behavior and titled “Development and Interrater Reliability of a Street Food.”

The third part was published in the International Journal of Environmental Research and Public Health. Its title: "Street Food Stand Availability, Density and Distribution Across Income Levels in Mexico City."

Rosales Chavez said the effort to build sustainable communities must be multi-faceted. One step: Obtain land to build more community gardens such as Spaces of Opportunity. 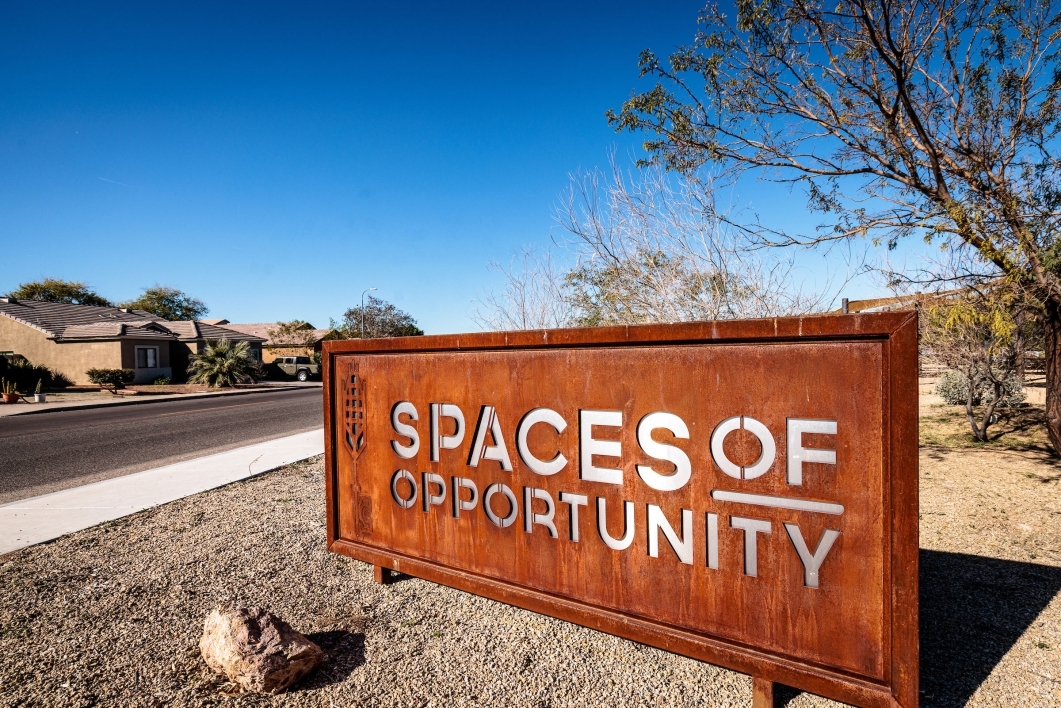 Spaces of Opportunity is a 10-acre incubator farm in south Phoenix for Valley residents with limited resources to grow food. 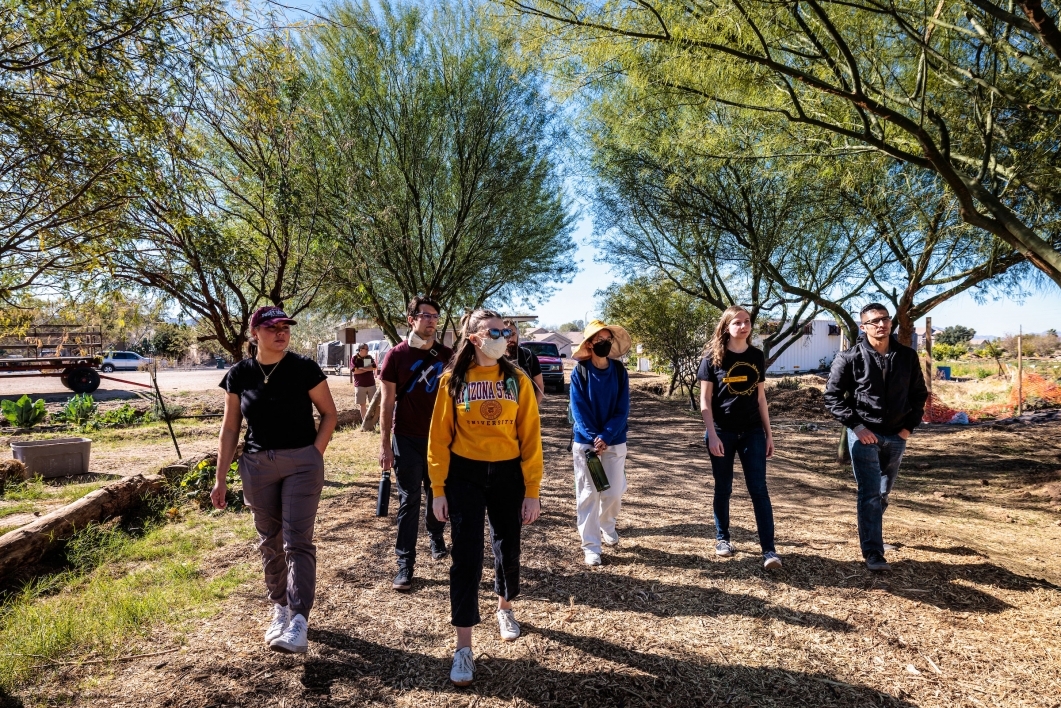 Assistant Professor Jose-Benito Rosales Chavez (right) and his graduate students take a tour of Spaces of Opportunity on Feb. 10. 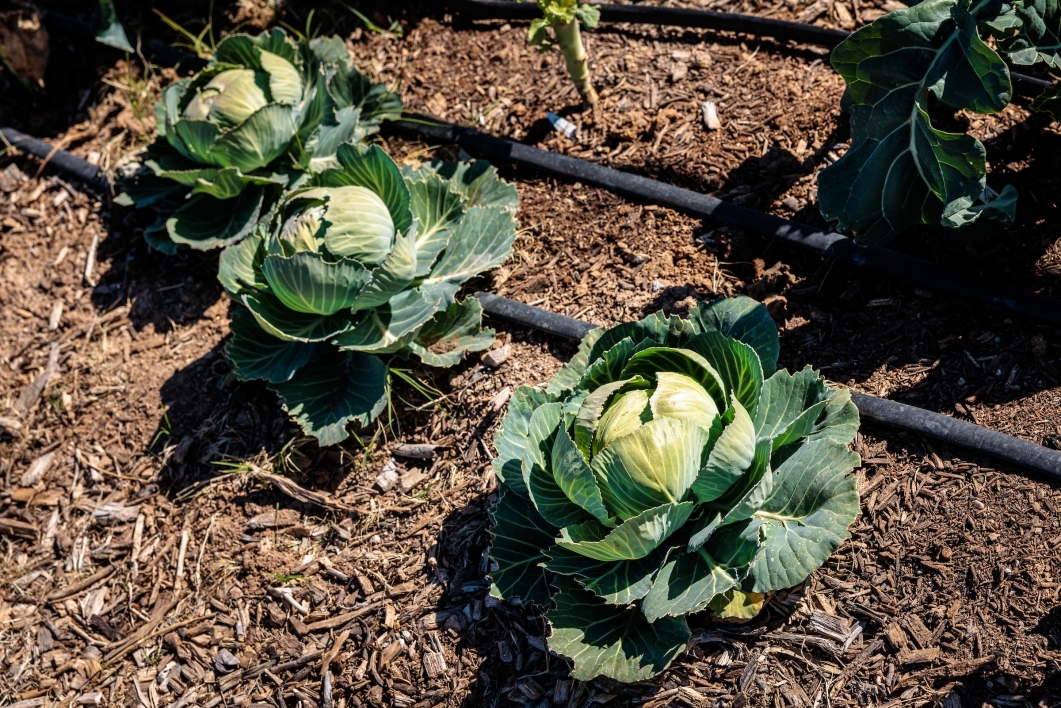 Cabbage and other crops grow in the rich soil at the Spaces of Opportunity community food gardens. 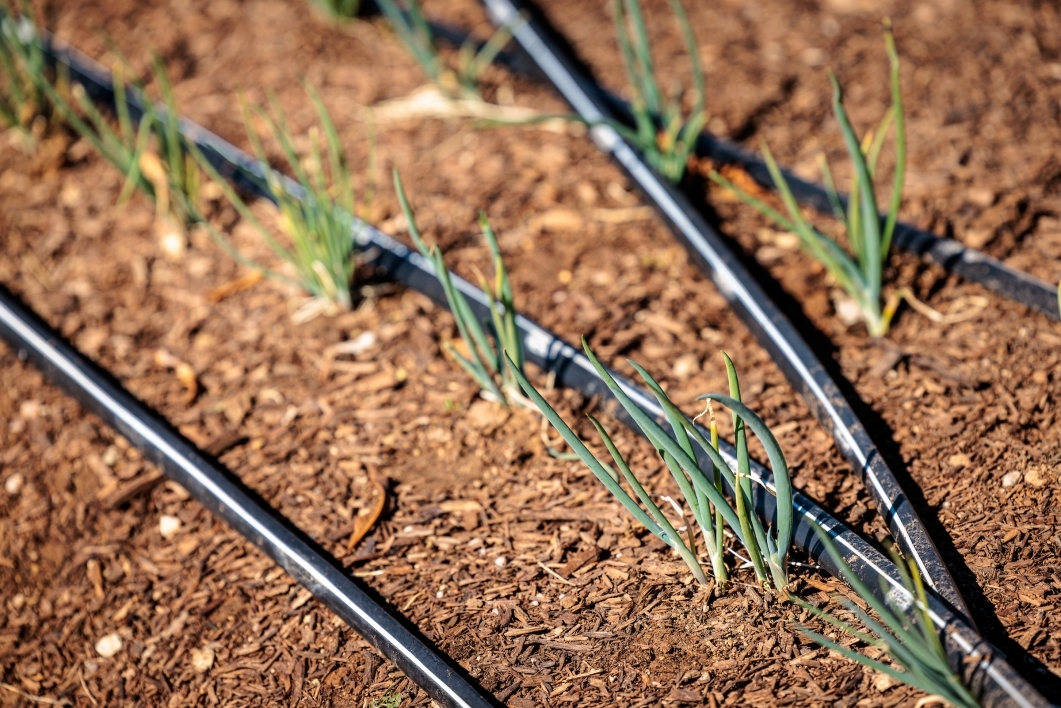 Several rows of onions are planted in the Spaces of Opportunity community food gardens. 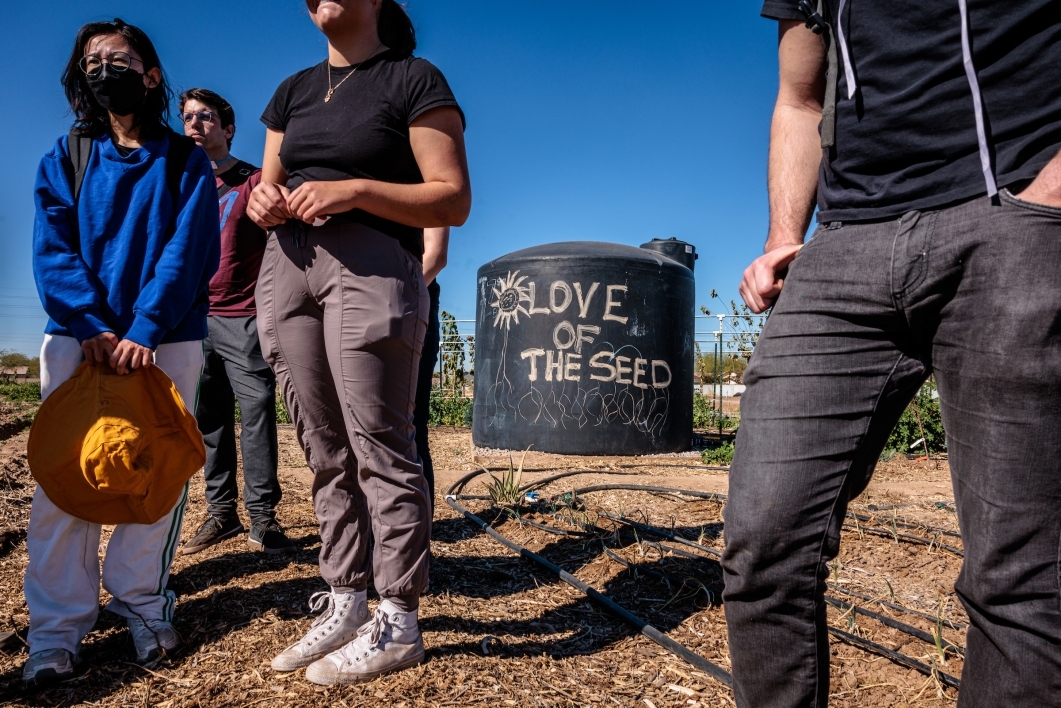 Some of the large water tanks are decorated in the Spaces of Opportunity community food gardens. One of Assistant Professor Jose-Benito Rosales Chavez's graduate students samples a petal from a large sunflower in the Spaces of Opportunity community food gardens. Sowan Thai, the land manager of Spaces of Opportunity, talks with Assistant Professor Jose-Benito Rosales Chavez and his graduate students about sustainable community food gardens in low income neighborhoods during their visit on Feb. 10.

But that cannot be the sole objective, Rosales Chavez said, because some families don’t have either the expertise or the time to take care of their own gardens.

“We just can’t have a program where you expect people to start growing their own things, because it takes time, it takes knowledge and sometimes it doesn’t work for everybody,” he said. “You have people who are maybe working too many jobs, and they don’t have the time to grow their own food. If they don’t have time to be in the field, how is that going to help them?”

That’s why availability and easy access to food is so important. On the 27,000 square miles of the Navajo reservation, for example, there are just 13 full-service grocery stores for a population of more than 300,000. The average resident has to drive three hours to buy food at a grocery store.

“If you go to a rural community, there’s nothing there,” Rosales Chavez said. “They may have a local convenience store, but it’s overpriced. When that happens, people have to compromise. When you have a low-paying job and kids you have to feed, do you buy expensive healthy food, and they’re going to get less of it, or do you buy horrible food you get more of but it’s not nutritious?”

That unwanted choice has health risks. According to the Centers for Disease Control and Prevention (CDC), Native American adults are 50% more likely to be affected by obesity than non-Hispanic whites, and are twice as likely as non-Hispanic whites to have diabetes.

One solution, Rosales Chavez said, can be found in countries where food stands offer healthy, pre-cooked or pre-made meals. One example in Mexico: Vendors that cut up cucumbers and mango to make fruit salads.

“Here, you have what we consider traditional grocery stores,” he said, "but in those places, there’s a much more diverse system. Food stands provide convenient, affordable, culturally relevant food access. Some family members don’t have the resources all the time to cook at home, so as they’re traveling and commuting from home to work or work to home, you can find these stands in the street.”

“It’s kind of a way of nudging them to help sell healthy food,” Rosales Chavez said.

Julia O’Neill, a graduate student in the class, said her applied project for the course is determining the barriers some communities face when trying to access healthy food. She’s also discovered the lack of education when it comes to making healthy food choices.

“It’s been a really eye-opening experience,” she said.

Ultimately, Hughes said, the class is about communities taking charge of their environments.

“One of the ways to do that is food and our connections to food,” he said.