Study: Life experiences as valuable as training when collecting some scientific data

Citizen science engages people who don’t identify as researchers in science investigations. Engagement can include everything from helping figure out what questions to ask, to gathering data and contributing to analysis.

Cindi SturtzSreetharan, associate professor at Arizona State University’s School of Human Evolution and Social Change, recently conducted a study with fellow anthropologists that compared observations made by community volunteers and those made by trained research assistants. 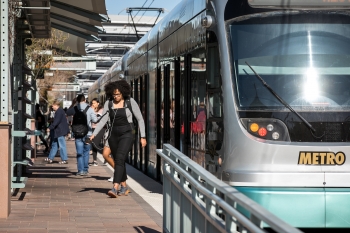 In this project, authors formulated a research question around how well volunteers and trained research assistants could recognize "structural exclusions."

“Structural exclusions include instances where a person may feel excluded from a space or area based on something intrinsicExamples include: poor lighting, narrow or small space, hostile symbols. to the space or area” SturtzSreetharan said. “We were particularly interested in spaces that may signal exclusions based on gender, body size and minority status.”

Participants were recruited to walk around predetermined public spaces in Tempe, Arizona, to look for instances of structural exclusions. One space was the light rail station, where signs to reduce bad public behaviors (littering, talking too loudly on phones) appeared in both English and Spanish.

However, the signage that explains the historical significance of the area only appeared in English. SturtzSreetharan said this can feel exclusionary not only for the lack of content in languages other than English, but also because only the signs that underscore bad behavior appear in a language other than English.

“The literature tells us that people who have experienced discrimination in their lives are better at recognizing discrimination and the feellings of exclusion which may follow,” SturtzSreetharan said. “So our hypothesis was that people who self-identify as one of the characteristics under investigation may be better able to recognize structural exclusions in public spaces.”

Neither hypotheses were fully confirmed.

With regard to the second hypothesis, it was not confirmed: There was no significant difference in the exclusions identified based on the citizen volunteers' membership in all of the categories of interest (gender, body size and minority status).

“We learned two really important things in this study,” SturtzSreetharan said. “First, citizen science volunteers can collect data that is similar in quality to trained research assistants. Second, community volunteers remind us that attending to contextually important interpretation is key. We need to go beyond so-called ‘book knowledge.’”

Sun Devils continue to climb the performance lists with another week of competition. ... Sun Devils continue to climb the performance lists with another week of competition.