Details on the ABOR-approved plan, including timing, cost, sharing the ice

The Arizona Coyotes need a temporary home ice to use while their proposed new arena and entertainment district advance through the development process. Approved by the Arizona Board of Regents on Thursday, Feb. 10, that temporary home ice will be at Arizona State University’s new multipurpose arena.

ASU’s new 5,000-seat multipurpose arena will open in fall 2022 as the home for Sun Devil hockey, gymnastics and wrestling, and other events on its Tempe campus. The arena already includes two NHL regulation-size ice sheets.

Other improvements will now be made, at the Coyotes' expense, to prepare the arena to temporarily house Coyotes home games. These improvements include constructing coaches’ rooms, equipment rooms, technology and other aspects of the new ASU arena according to NHL standards. The added cost is up to $19.7 million, which will be paid in advance by the Coyotes.

“We are glad that we were able to come to an agreement to provide the Coyotes with a temporary home while their new arena is built just a few miles away,” said Morgan R. Olsen, ASU executive vice president, treasurer and CFO. “Our new multipurpose arena also will benefit from the addition of pro-level touches that will be paid for by the Coyotes but will remain with our building after they leave.

“We were already beyond excited to open this wonderful new ASU arena. This just makes it even more special,” Olsen added. 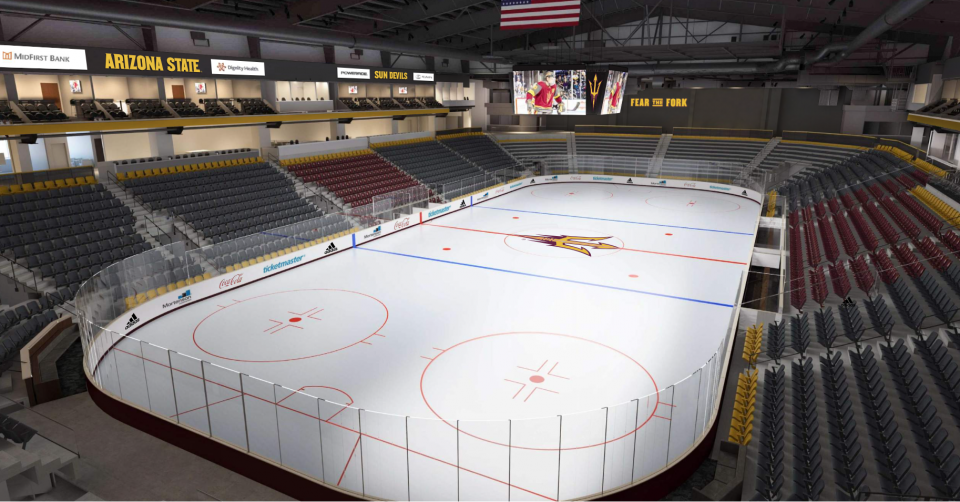 Question: Will this be the new permanent home for the Coyotes?

Answer: No. The new ASU multipurpose arena holds 5,000 fans, far below what is needed by an NHL team. This will be a temporary solution for the team while its new arena is built nearby.

Q: When will the ASU multipurpose arena be completed?

A: The multipurpose arena will open in fall 2022. Construction began in December 2020 on the arena, which is on the east side of Packard Drive, near the former ASU baseball stadium. The arena should be completed by October. The additional space for the Coyotes will not be ready until December.

Q: What are the details of ASU’s new multipurpose arena?

A: The new arena spans nearly 200,000 square feet and will accommodate a range of community, entertainment and athletic uses. The arena can be used for concerts, lectures, large-scale meetings, esports competitions and a variety of athletic events. The original approved project cost of $115 million will now be about $134 million, with up to $19.7 million coming from the Coyotes.

Q: How did the Coyotes become involved?

A: In December 2021, the Arizona Coyotes approached ASU to propose playing their 2022, 2023 and 2024 NHL home games at the newly constructed ASU multipurpose arena. The Coyotes need a temporary home due to the end of their lease agreement with the city of Glendale and the approximate three-year build time for their proposed new arena in Tempe.

Q: What exactly will be added to the project for the Coyotes?

A: The original ASU arena project now will include the construction of a two-story, approximately 15,000-square-foot annex adjacent to the northeastern edge of the arena. This annex will accommodate NHL-quality home and away team dressing rooms, training areas, equipment rooms, nutrition stations, coaches’ work room, team storage and a fitness room.

In addition to the two-story annex building, several facility upgrades will be added to meet NHL requirements. These upgrades will include additional reserve chilling capacity for the ice plant, enhanced broadcasting infrastructure, modified dasher boards, media and medical services, and analytics and replay capabilities, as required by the NHL.

Q: What is the financial risk to ASU?

A: The university is comfortable that there is little to no risk for making the improvements requested to accommodate the Coyotes, as the team will pay upfront for any additional costs. The Coyotes will prepay all rent and expenses prior to each season to use the facility for that season.

Q: Did ASU build this facility for the Coyotes?

A: No. The Coyotes did not approach ASU until late 2021, when the multipurpose arena was already more than half built.

Q: How will Coyotes home games impact the scheduled home games for the ASU hockey team?

A: There will be no impact to the scheduled ASU hockey home games. ASU has scheduling priority.

Q: How will the second sheet of ice be used?

A: The second full-size ice sheet will be available for student use, as well as youth, adult and club hockey programming, providing an additional rink in the Valley. Arizona is one of the fastest-growing states for youth hockey participation in the country, according to USA Hockey. 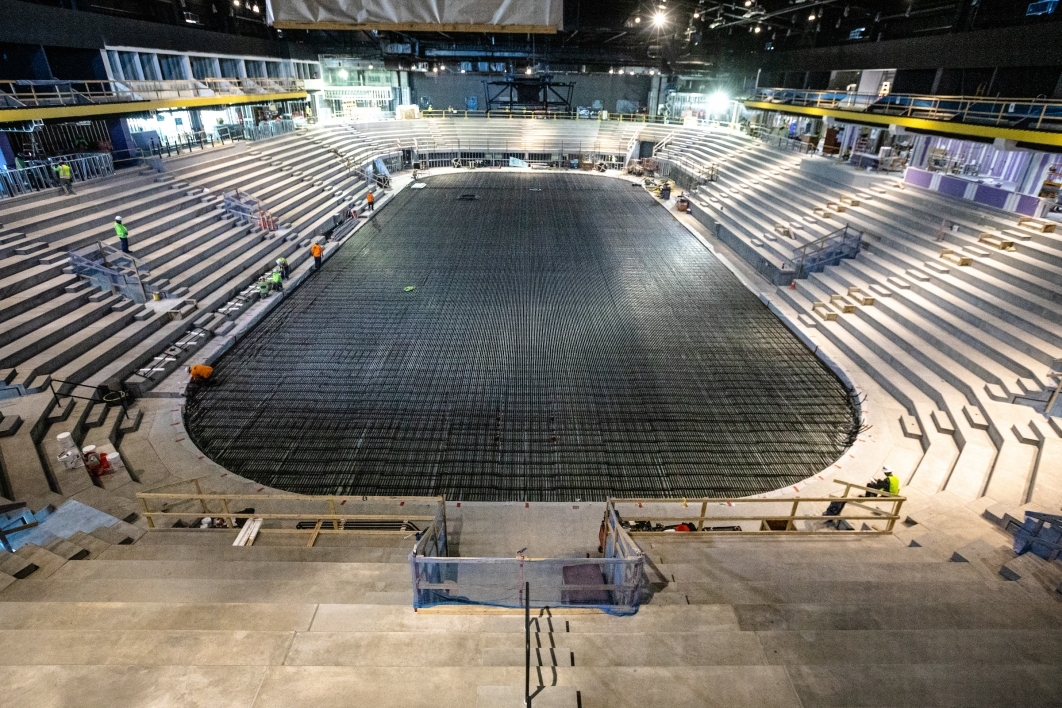 Construction continues at the new 5,000-seat multipurpose arena on ASU's Tempe campus. It will open in fall 2022 as the home for Sun Devil hockey, gymnastics and wrestling, and other events on its Tempe campus — as well as the planned temporary home of the Arizona Coyotes while their new permanent facility is built. 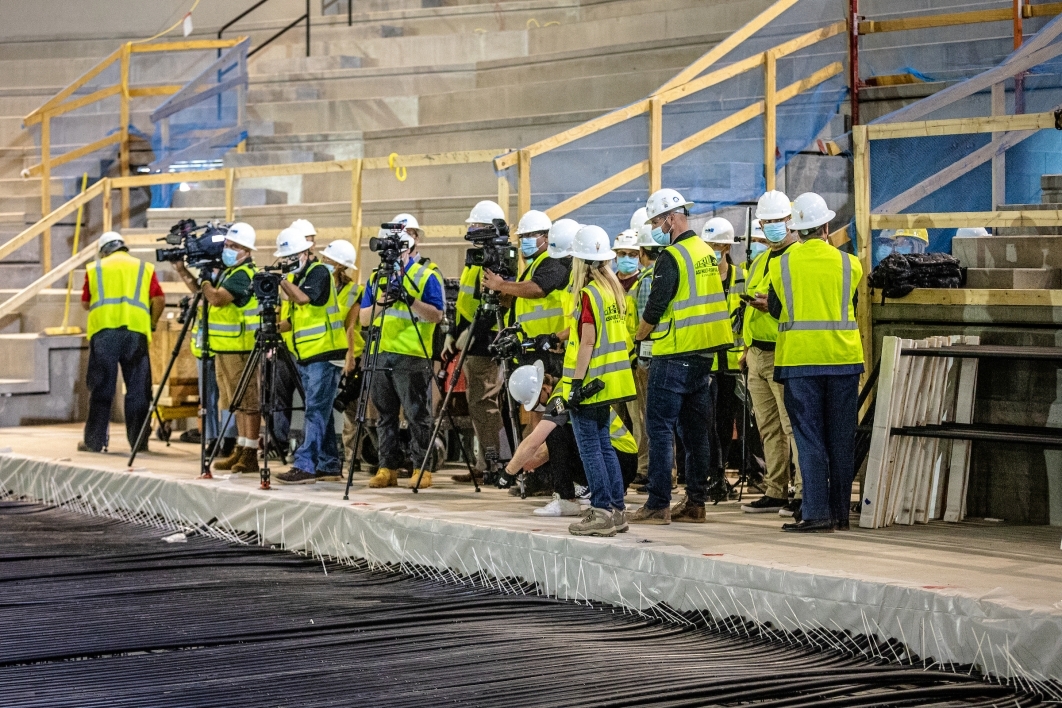 Members of the media tour the new arena on Monday, Feb. 14. 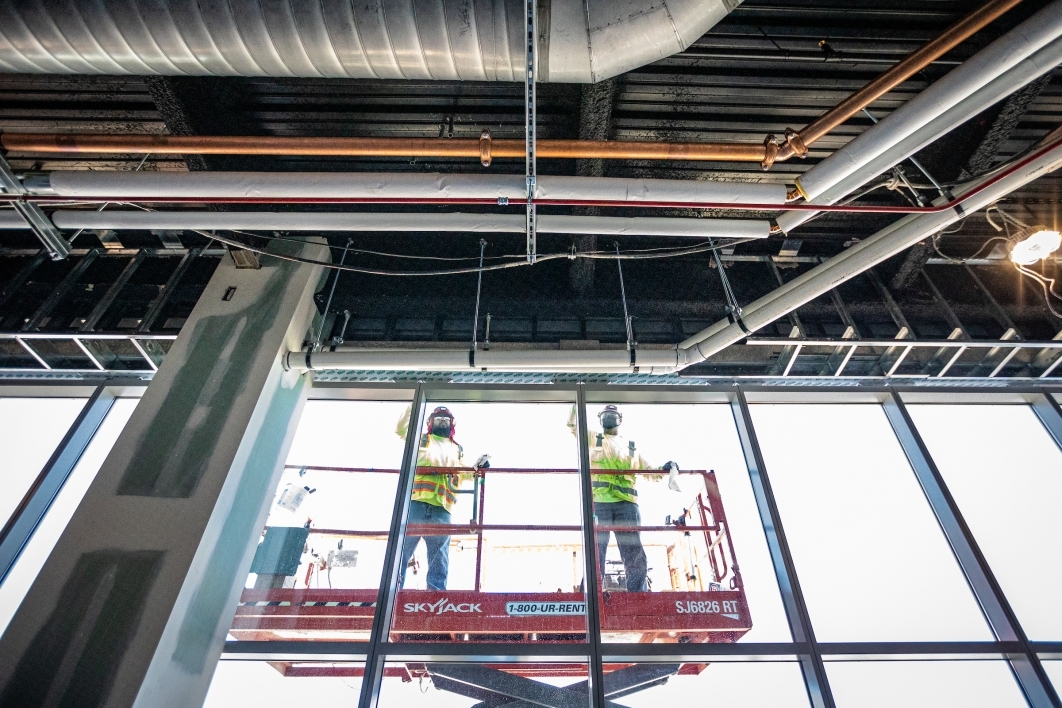 Construction began in December 2020 on the arena, which is on the east side of Packard Drive, near the former ASU baseball stadium. The arena should be completed by October. The additional space for the Coyotes, including a two-story annex, will not be ready until December. 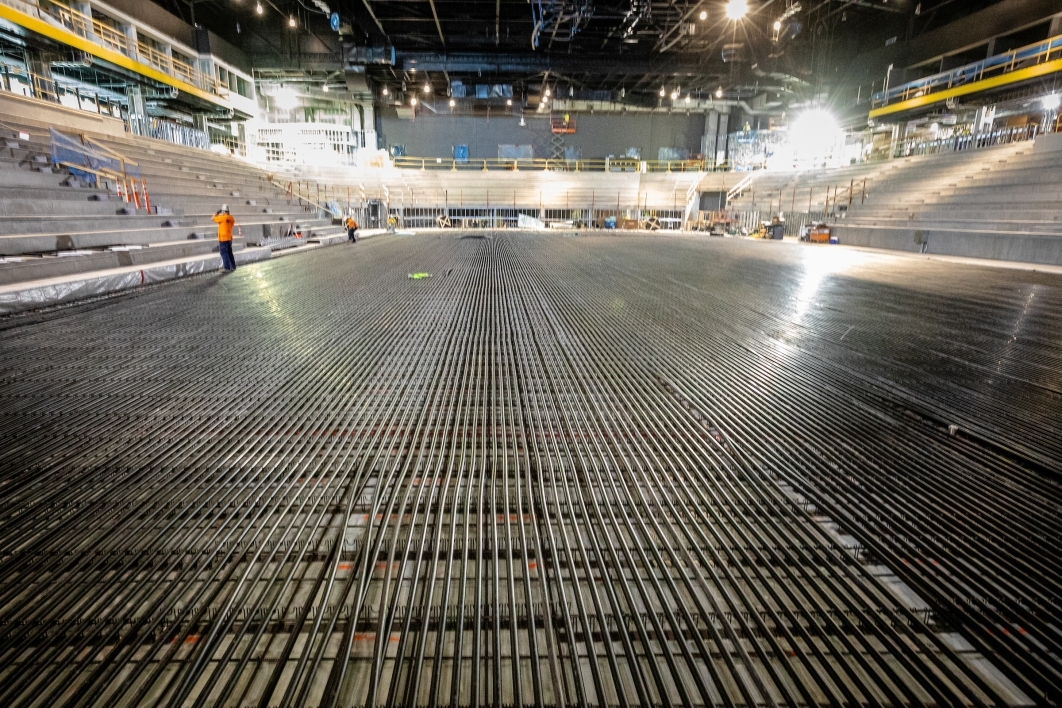 The arena already includes two NHL regulation-size ice sheets. Other improvements will now be made, at the Coyotes' expense, to prepare the arena to temporarily house Coyotes home games. These improvements include constructing coaches’ rooms, equipment rooms, technology and other aspects of the new ASU arena according to NHL standards. 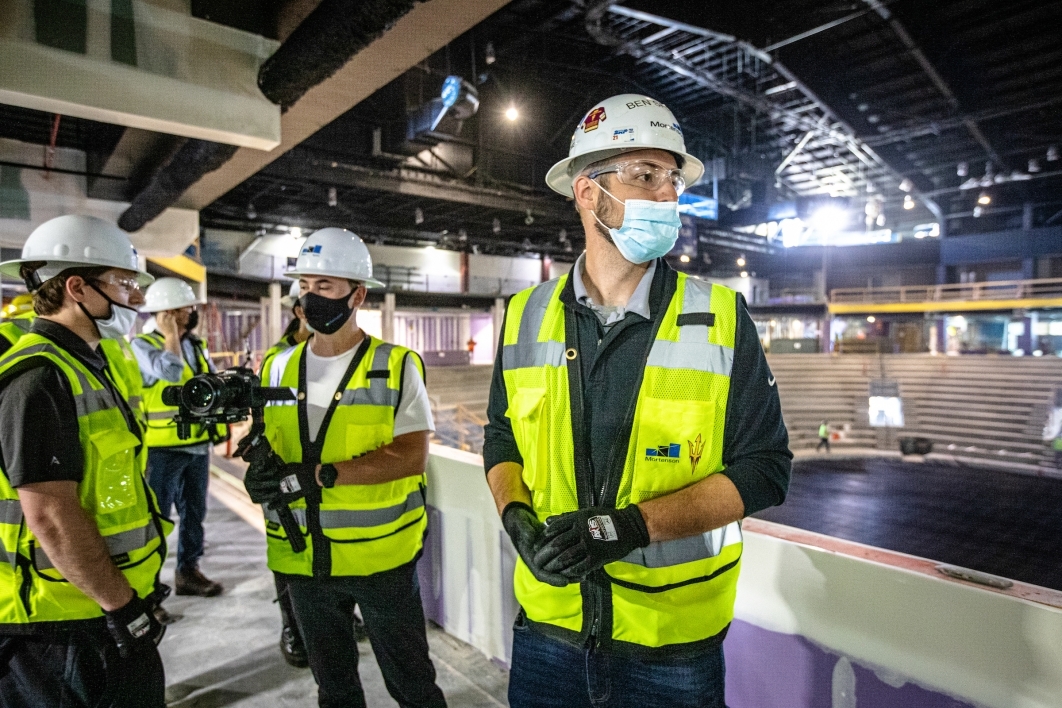 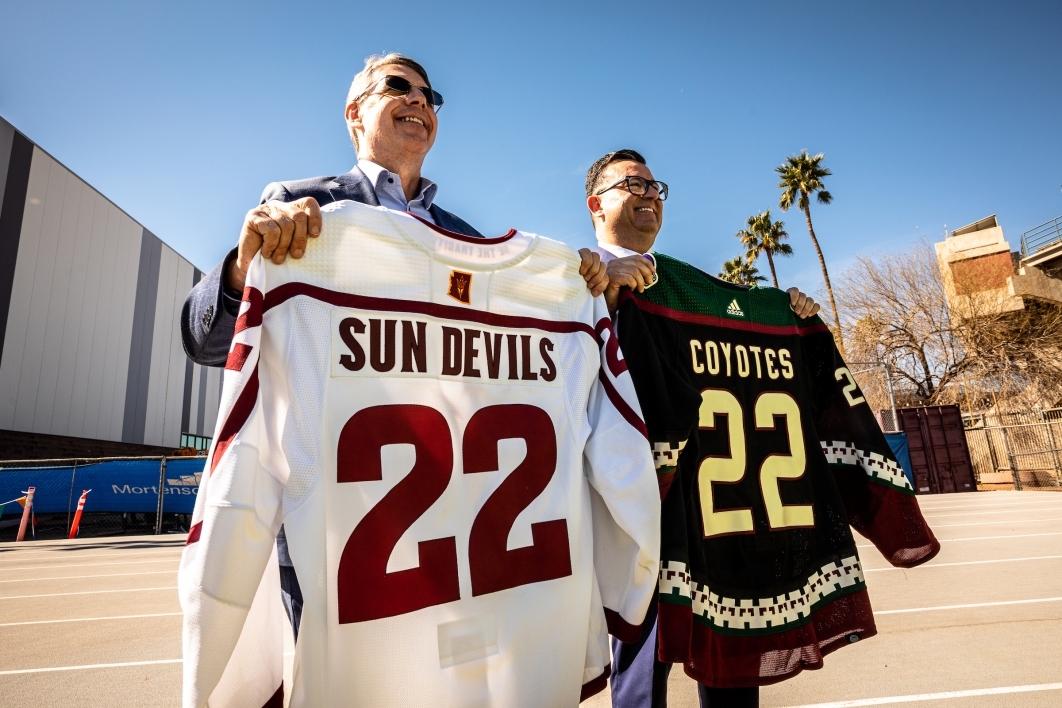 ASU Executive Vice President and CFO Morgan Olsen (left) and Coyotes President and CEO Xavier Gutierrez pose with jerseys for the media after a tour of the new arena on Feb. 14.

Top photo of the ASU multipurpose arena on Feb. 14 by Charlie Leight/ASU News. This story was originally published Feb. 10 and updated Feb. 14.

Matt Witczak believed the true measure of a professor is not the publications and citations accrued, but the support extended to peers and students.By that human measure, Witczak was exemplary. Across 47 years at two universities, the Arizona State University professor emeritus devoted himself to the education of more than 5,000 civil engineering students, including service as graduate adviser to...

Matt Witczak believed the true measure of a professor is not the publications and citations accrued, but the support extended to peers and students.

By that human measure, Witczak was exemplary. Across 47 years at two universities, the Arizona State University professor emeritus devoted himself to the education of more than 5,000 civil engineering students, including service as graduate adviser to 70 of them. 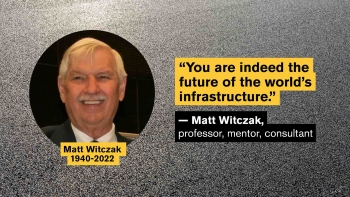 Consequently, the news of Witczak’s death on Jan. 18 sparked an outpouring of tribute from the many people who knew and deeply admired him.

“Matt was a renowned researcher and a highly sought-after industry consultant,” says Sandra Houston, an emeritus professor of civil and environmental engineering in the Ira A. Fulton Schools of Engineering at ASU. Houston also was the person who recruited Witczak to ASU, and says she felt fortunate to have participated in bringing such high-caliber talent to the civil engineering program.

“His leadership drove, what is today, the most advanced and impactful research on pavement design and analysis. But he devoted so much of his time to mentoring younger faculty members and students. He was genuinely caring toward everyone around him,” she says. “We were all fortunate to have Matt’s presence in our lives, and we were very saddened to hear about his passing.”

Witczak was a professor of civil engineering at ASU from 1999 until his retirement 2011. He came to Arizona after more than a quarter century of teaching and research at the University of Maryland. Earlier in his career, Witczak was a special projects engineer for the Asphalt Institute, an international trade association. He also served as a combat engineer and intelligence officer in the U.S. Army.

“I had the utmost honor to have him as a mentor and work with him at both ASU and Maryland,” says Kamil Kaloush, a professor of civil and environmental engineering in the Fulton Schools. “He was an inspiration to me as well as many others through his mentorship, scholarship and research contributions in the field. He truly changed our lives and career paths for the better.”

Witczak co-authored the world’s foremost textbook on pavement design and analysis. He also helped lead the development of widely influential guidelines on airfield design and management. His expertise took him to more than 75 countries on behalf of the United Nations, the World Bank, the U.S. Armed Forces, as well as many institutes, associations and corporations.

“We were all inspired by his passion for life and work, as well as his strength and never-ending generosity. The memories of great moments we had together are the best way to celebrate his life and his legacy.”

Ram Pendyala, who works in the field of transportation and serves as the director of the School of Sustainable Engineering and the Built Environment, one of the seven Fulton Schools at ASU, noted that Witczak earned the highest respect of both the research and industry communities.

“His passing is a huge loss to the transportation profession, and we will greatly miss his wit and wisdom,” Pendyala says.

Over the course of his career, Witczak received multiple distinguished awards from the Asphalt Institute, the Association of Asphalt Paving Technologists, the National Asphalt Pavement Association, the Transportation Research Board of the National Academies of Sciences, Engineering and Medicine, as well other professional bodies and technical journals.

“Matt was truly a giant in the pavement design and research field,” says George Way, chairman of the board of the Rubberized Asphalt Foundation and a retired chief pavement design engineer for the Arizona Department of Transportation. “I am confident that the legacy of his accomplishments will continue forever.”

Witczak acknowledged that he had many opportunities to leave academia for lucrative commercial work. But “the interaction with bright young minds and the desire to better understand my technical discipline always led me back to being a professor,” he said.

While at ASU, Witczak founded the Advanced Pavements Laboratory to conduct comprehensive research that has become recognized for its national and international importance. He also led creation of the Arizona Pavements/Materials Conference as a means for academic and industry professionals to discuss advances in design, construction and technology.

Bob McGennis, a technical manager for asphalt at the HollyFrontier corporation, met Witczak in 1980 and stayed connected with him throughout his 40 years in the roadway construction industry.

“I remain in awe of Matt as a person, researcher and engineering educator,” McGennis says. “Like many others, the arc of my career was positively influenced by my association with him. It was my very good fortune to have known him.”

In 2017, the Arizona Pavements/Materials Conference organizing committee established the Dr. Matthew W. Witczak Endowment in his honor to provide scholarships, fellowships and other resources to enhance the academic experiences of those pursuing a career in pavement engineering. Pendyala believes the endowment will carry forward Witczak’s legacy through the education and training of the next generation of pavement professionals.

During his final lecture at ASU, Witczak reminded civil engineering students to stay connected with the academy in their roles after graduation because “higher education is not completed with a university degree. Rather, it begins with one … (and) we need to reduce the technological gap between the current state of the art and the current state of practice.”

He also extended his best wishes and highest hopes to each of them during their professional journeys, saying, “You are indeed the future of the world’s infrastructure.”