Research led by Arizona State University Professor Hilairy Hartnett is being honored with the 2022 John Martin Award from the Association for the Sciences of Limnology and Oceanography (ASLO).

The ASLO John Martin Award, established in 2005, recognizes a paper in aquatic sciences that is judged to have had a high impact on subsequent research and that has led to a fundamental shift in understanding. 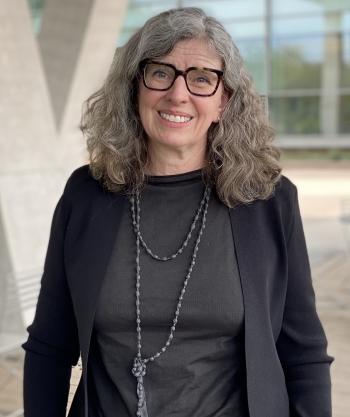 “Professor Hartnett is a leader in the study of organic carbon in sedimentary environments,” said Meenakshi Wadhwa, director of the ASU School of Earth and Space Exploration. “This award is a testament to how influential and foundational her work has been in her field.”

Hartnett is being recognized for her research published in Nature in 1998, titled “Influence of oxygen exposure time on organic carbon preservation in continental margin sediments,” with University of Washington co-authors Richard Keil, the late John Hedges and Allan Devol.

This research provided the first evidence that burial of organic matter at the seafloor is a direct control on oxygen in the Earth’s atmosphere, which has implications for the Earth’s carbon cycle and the stability of oxygen in our atmosphere.

As Hartnett explains it, organic carbon and oxygen are produced during photosynthesis. If the carbon escapes degradation and gets buried in sediments, the oxygen is free to build up in the atmosphere, which is good for organisms like humans who breathe oxygen. More atmospheric oxygen leads to increased carbon degradation, and the oxygen decreases. This negative feedback prevents oxygen from getting too high or too low in the atmosphere.

This idea itself wasn’t new, but to show it directly, Hartnett and her team needed to know how long the sediment was exposed to oxygen, and what fraction of the carbon in the sediments is preserved. While these are simple concepts, they are hard to measure. For every location, they had to measure oxygen flux at the seafloor and collect cores for chemical analysis of sediments and porewaters. 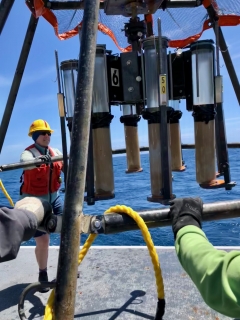 Hartnett (in Sparky hard hat) on the research cruise “Coring to Reconstruct Ocean Circulation and Carbon Dioxide Across 2 Seas (CROCCA-2S),” collecting sediment cores from the Southern Indian Ocean floor in 2019. The cores are “samples of the past,” and their chemistry holds clues to the history of Earth’s climate over time. Photo by N. Umling

“The tool developed by Hartnett and co-authors to predict carbon burial efficiency was elegant and revolutionary to the field,” ASLO President Roxane Maranger said. “More than 20 years later, the oxygen exposure time concept continues to be integral to oceanography and limnology, particularly as we continue to assess how climate change impacts on aquatic ecosystem oxygen dynamics will influence carbon sediment burial.”

Hartnett joined ASU in 2003, where she is a professor at ASU’s School of Earth and Space Exploration and the School of Molecular Sciences, as well as a Julie Ann Wrigley Global Futures Laboratory senior sustainability scientist. She also directs the Carbon and Nitrogen Dynamics Lab at ASU, where her research focuses on biogeochemistry and organic geochemistry in aquatic systems, with applications for astrobiology, urban ecology and life in the Anthropocenerelating to or denoting the current geological age, viewed as the period during which human activity has been been the dominant influence on climate and the environment.

“It is a tremendous honor to have our paper recognized with the John Martin Award — the papers that have received it are all true ‘must reads’ in the marine and aquatic sciences,” Hartnett said. “Looking back, I can see how my early work on the biogeochemistry of low oxygen systems has informed my research for over 20 years. It led to many cool projects and collaborations — including a recent cruise investigating sediments in the Southern Indian Ocean. The work is even helping to frame ideas about biosignatures for anoxic worlds beyond Earth!”

“We knew our demonstration of the negative feedback between organic burial in sediments and oxygen in the oceans and atmosphere was important when we wrote the paper,” Hartnett added, “but I never imagined it would continue to influence people’s thinking for such a long time.”

The ASLO 2022 John Martin Award ceremony will be held on May 18 at the ASLO Joint Aquatic Sciences meeting in Grand Rapids, Michigan, where Hartnett has been invited to give a plenary talk.

The Graduate College has announced the next phase of Arizona State University’s collaboration with the Center for the Integration of Research, Teaching and Learning. Undergraduate teaching certificates are now available to ASU graduate students and postdocs.

The Center for the Integration of Research, Teaching and Learning is a learning community of diverse research universities engaged in the deliberate, systematic and reflective use of research methods to develop and implement teaching practices that advance STEM learning in undergraduate education.

Founded in 2003 as a National Science Foundation Center for Learning and Teaching in higher education, the core ideas of the center's network are to provide professional development graduate training through diversity, teaching as research and learning communities. The network now includes 42 member universities in the United States and Canada, including Yale, Stanford, UCLA, Penn State and Caltech.

ASU graduate students and postdocs wishing to become certified by the Center for the Integration of Research, Teaching and Learning may do so at three tiered levels — associate, practitioner and scholar — representing certain benchmark achievements. Certification is recognized as a significant commitment to pedagogy and teaching in one's discipline by more than 40 research universities in the center network. The associate certificate is available now, while the practitioner and scholar certificates will be available later this spring.

“Earning professionalization certificates through CIRTL is one way for graduate students and postdocs aspiring to faculty positions to demonstrate their commitment to teaching excellence," said Tamara Underiner, associate dean of professional development and engagement at the Graduate College. “Because of the breadth of the CIRTL Network, these certifications will be recognized by many of the top research universities.”

Through center membership, graduate students and postdocs have expanded opportunities for future faculty preparation, are able to connect with a national network of future and current faculty, and learn more about evidence-based research and teaching as research.

All members of the ASU community are welcome to participate in any of the free center offerings, including events, courses and learning communities, as well as:

While the Center for the Integration of Research, Teaching and Learning initially started with a focus on STEM education, ASU does not limit participation to STEM students, and encourages all to participate. Join the center network.