A new report released today in the Proceedings of the National Academy of Sciences of the United States of America calls for policymakers worldwide to develop sustainable and equitable solutions to some of the most urgent global challenges. 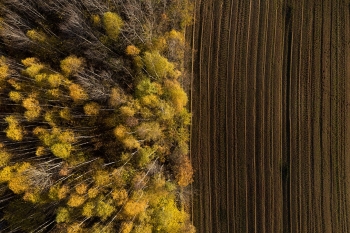 Aerial view of a deforestation area for agricultural purposes. Image courtesy of Depositphotos

The study is intended to inform policies aimed at addressing challenges like limiting the impacts of climate change, designing systems for sustainable food and energy production, protecting biodiversity and balancing competing claims to land ownership. It also details implications for policymakers to consider if they hope to develop economically, culturally and environmentally sustainable solutions to these complex challenges.

“Global agreements on climate change, biodiversity and development are increasingly focused on land management as the solution to a long list of challenges,” said Ariane de Bremond, executive officer of the Global Land Programme, which convened the authors to develop the study, in a press release. “There is a real urgency for decision makers to understand that meeting our sustainable development goals in a way that’s equitable will require policies that account for the 10 facts explained in the study.”

Turner, whose research as a geographer and human-environmental scientist focuses on land change from prehistory to present, as well as urban land system design, vulnerability and resilience, and sustainability, explained further.

“This is a product of the first-ever natural science and social science, or integrated science, effort begun in early 1990s by the International Geosphere-Biosphere Programme and the International Human Dimensions Programme to understand global environmental change,” he said. “Two decades of activities prove that ‘integrated science’ crossing the natural and social fields can work — achieving an overarching understanding that guides science and informs practice. The (10) ‘facts’ point to what the science community now understands about land dynamics and provides insights of which decision makers should be aware.”

Navin Ramankutty, co-chair of the Global Land Programme and professor at the University of British Columbia, said in the release, “Many policy projects, such as reforestation to absorb carbon or setting up nature conservation areas, ignore lessons learned by land-system scientists. This paper presents a checklist of basic facts that must be considered in effective policymaking where land is concerned.”

The 10 facts outlined in the study speak to the relationship people have with the land itself on a physical level as well the social, economic, cultural, environmental and spiritual implications of how land-use decisions are made and by whom. These facts, as jointly identified by the study’s co-authors, are:

2. Land systems exhibit complex behaviors with abrupt, hard-to-predict changes. Policy interventions are typically intended to solve a particular problem, but often fail when they ignore system complexity. Addressing one problem in isolation can result in unintended harm to natural areas and people.

3. Irreversible changes and path dependence are common features of land systems. Converting land from one use to another, such as the clearing of old-growth forests, leads to changes felt decades to centuries later. Restoration rarely brings land back to a state that truly matches previous conditions.

4. Some land uses have a small footprint but very large impacts. Cities, for instance, consume large amounts of resources that are often produced elsewhere using vast amounts of land; they can also reduce negative impacts by concentrating human populations on a relatively small land footprint. Net impacts can be hard to measure and predict.

5. Drivers and impacts of land-use change are globally interconnected and spill over to distant locations. Due to globalization, land use can be influenced by distant people, economic forces, policies, organizations and decisions.

6. We live on a used planet where all land provides benefits to societies. People directly inhabit, use or manage over three-quarters of Earth’s ice-free land, with more than 25% inhabited and used by Indigenous peoples and local communities (IPLC). Even uninhabited lands are connected with people in different ways; no change in land use anywhere is free of trade-offs.

7. Land-use change usually entails trade-offs between different benefits — “win-wins" are rare. While land use delivers a range of benefits, such as food, timber and sacred spaces, it also often involves trade-offs for both nature and some communities of people. Land-use decisions involve value judgments to determine which benefits to prioritize, and for whom.

8. Land tenure and land-use claims are often unclear, overlapping and contested. Rights to use and access land can overlap, belong to different people or to different kinds of access as in rights to ownership or use.

9. The benefits and burdens from land are unequally distributed. A small number of people own a disproportionate amount of land area and land value in most countries around the world.

10. Land users have multiple, sometimes conflicting, ideas of what social and environmental justice entails. There is no single form of justice that is fair for all. Justice means different things for different people, from recognizing the claim of Indigenous groups to land, to impacts on future generations, to what systems are used to determine whose claims are given priority.

According to the study, these facts shape the effectiveness and social and environmental impacts of policies and decisions involving land, from climate change mitigation and adaptation, to food availability, to biodiversity and human health. The study also identifies approaches for policymakers to consider when working to address challenges that are affected by land use.

While convening a large group of experts to determine these facts is progress, Turner sees the impact being made through continued international efforts.

“I suspect that immediate policy decisions will pay minimal attention, in part because the facts are broad and do not pinpoint direct actions that are positive or negative,” Turner said. “The impact will evolve through the impacts that this and other work of the Global Land Programme will have on considerations of the Intergovernmental Panel on Climate Change, Intergovernmental Science-Policy Platform on Biodiversity and Ecosystem Services and other international agendas that influence science and practice.”

With four years under her belt, Cierra Flood is ready to push the Sand Devils to a new level in her final season. ... With four years under her belt, Cierra Flood is ready to push the Sand Devils to a new level in her final season.