The Lorraine W. Frank Office of National Scholarships Advisement (ONSA) has announced that four outstanding Arizona State University undergraduates have been nominated for the Goldwater Scholarship, the most prestigious award in the United States for undergraduate researchers in the natural sciences, engineering and mathematics.

The Goldwater Scholarship was established by Congress in 1986 to serve as a living memorial to honor the lifetime work of Arizona Sen. Barry Goldwater, who served his country for 56 years as a soldier and statesman, including 30 years in the U.S. Senate. The scholarship is part of ongoing efforts to ensure that the United States continues to produce the world’s leading scientists and engineers. “The Goldwater Scholarship is really the award for undergraduate STEM students in the U.S.,” said Kyle Mox, associate dean of national scholarships and the designated campus representative for the Goldwater Scholarship. “Beyond the $7,500 stipend, the more significant benefit of this award is its prestige. Winning a Goldwater positions students well for admission to top-tier PhD programs and other major fellowships, like the Rhodes Scholarship, Churchill Scholarship or NSF Graduate Research Fellowship.”

“This nomination means the world to me,” Pascavis said. “It is encouraging to know others believe that I can have an impactful research career.”

“I am extremely grateful to ASU for giving me the privilege of representing the university and the School of Molecular Sciences in a national scholarship competition,” Harstad said.

“The nominee cohort this year is commendably diverse,” Mox said. “Their academic interests and experiences are remarkably different from one another. Also interesting is that they come from four different states.” 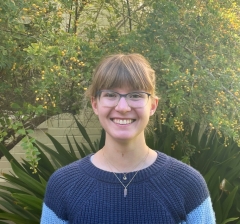 Blaske, a junior at ASU, hails from Grand Ledge, Michigan. Her long-term objective is to pursue a PhD in planetary science and contribute to scientific missions to the inner solar system that study the history and evolution of rocky planets.

“My passion really lies in planetary geology,” Blaske said. Her previous research projects have centered on heat flows out of metallic cores of exoplanets and the evidence of ice in Martian gullies, and her current work under Assistant Professor Joseph O’Rourke examines the relationship between the atmosphere and the surface of Venus. Additionally, she is the president and founder of the Sun Devil Curling club and hopes to lead a team to the collegiate championships.

Falconer, also a junior, is a native of Portland, Oregon. After completing a PhD in electrical engineering, she intends to work in a national laboratory and conduct research and development related to electromagnetics and radio-frequency engineering. She cites her experience designing and installing solar-powered refrigerators on the Navajo Nation as part of Engineers Without Borders as a clarifying experience. “While I worked, I had a growing sense of engineering’s impact on people,” she said. “It isn’t just numbers and simulation software – it affects every person on this planet and can change the lives of many.”

Falconer’s current work is with the Compact X-ray Free Electron Laser (CXFEL) Laboratory in the ASU Biodesign Institute. As part of this research group, Falconer has designed instruments and protocols to test and calibrate the microwave equipment of the CXFEL, which is the first of its kind.

Harstad, from Albuquerque, New Mexico, will pursue a PhD in organic chemistry before moving on to a career in pharmaceutical research and development.

One of her current projects is the development of instructional materials for medicinal chemistry courses with Assistant Professor Kyle Biegasiewicz, under whose guidance she is also helping to prepare a journal article on chemoenzymatic catalysis.

This past summer, she completed an internship at Merck, an experience that cemented her career goals.

“The COVID-19 pandemic has shown the continuing need for pharmaceutical research, as well as the important role this industry plays in the modern world,” Harstad said. 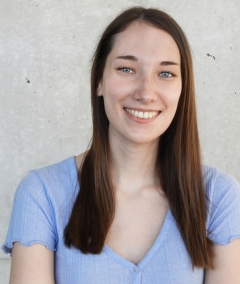 Pascavis, from Gilbert, Arizona, intends to pursue environmental engineering in her doctoral studies.

“My career goal is to create water purification and reclamation technologies to increase access to potable water, especially for people in low-income countries,” she said.

She has participated in a myriad of applied research projects while at ASU. Since 2019, she has worked under Regents Professor Paul Westerhoff to create technologies that prevent biofilm growth in water storage tanks. For her honors thesis, she is collaborating with the USDA to create a device to help small-scale farmers reduce their water consumption. As a member of the Luminosity Lab, she helped to develop a new method for sterilizing personal protective equipment (PPE). As a summer intern for the Bill and Melinda Gates Foundation, she performed a life cycle assessment of a decentralized sanitation refinery.

Also notable about the nominees is that all four are women. 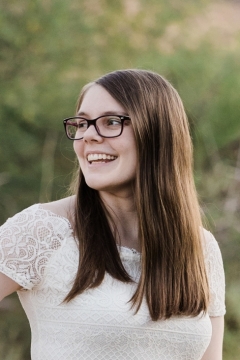 “To my knowledge, this is the first time that’s happened at ASU,” Mox said. “It’s especially significant when you consider the disappointing national data on women’s participation in STEM.”

According to the Pew Research Center, women remain underrepresented in STEM majors, with only 42% of mathematics degrees, 40% of physical science degrees and 22% of engineering degrees going to women.“Overall in the U.S., women make up nearly 60% of bachelor’s degree recipients,” Mox said. “I think a lot of people just assume that, in 2022, we must be past this sort of disparity. But we aren’t.”

“I am honored to be included in this group,” Blaske said. “For decades, STEM fields have been dominated by men, but this emphasizes to me that ASU is committed to giving equal voices and opportunities to women and other underrepresented groups.”

“It speaks to the great strides being made for females in STEM,” Pascavis said. “As a woman in mechanical engineering, a field where women are still vastly underrepresented, it means a lot to me to be a part of this group.”

“So many of the mentors I look up to every day are women,” Blaske said. “I hope that I can one day inspire more girls to pursue careers in fields previously thought to be closed to them.”

As with most national scholarships and fellowships, the application process for the Goldwater Scholarship is challenging and long. Although the national submission deadline occurs annually at the end of January, ONSA begins the recruitment and advising process in October.

Each college or university in the U.S. may nominate only four students per year to the Goldwater Scholarship, so ONSA establishes a preliminary deadline in early December for ASU students who seek nomination.

“I often tell students that the hardest part of the process is the campus nomination process,” Mox said. “We have so many talented, ambitious STEM majors, and ASU provides ample opportunities to get engaged in significant undergraduate research.”

The applications are then reviewed by a long-standing faculty nominating committee, which evaluates the candidates’ academic record, research achievements and letters of recommendation before identifying four institutional nominees.

“It’s always a difficult choice,” Mox said. “We receive so many strong applications, and our committee always struggles to find consensus.”

The application itself requires multiple short essay responses and a three-page research proposal, in which applicants summarize their previous research and describe their future research goals. Throughout the process, applicants seek advice and guidance from ONSA and their faculty members.

“The planning, drafting and revision process can be arduous,” said Mox.

“I worked for months on my application,” Blaske said. “The process was rigorous and demanding, and caused a lot of introspection. At the end, it enormously reinforced my desire to go into research and gave me the confidence to trust in my abilities.”

Falconer agrees that the application process itself is instructive.

“It really made me think about where I am headed and what I plan on doing after graduation. We don't often have the time to sit and think about where we are headed, so it was useful to have to write about it.”

When asked if she had advice for future applicants, Pascavis said, “Start early and complete multiple drafts. If you feel overwhelmed, remember that you probably have more people than you think to help you.”

“Apply as a sophomore if you can," she said. "I applied sophomore year, and while I didn’t make it past the ASU stage, I felt that putting the application together last year prepared me for junior year and made me a stronger writer.”

The Goldwater Foundation will announce the 2022 cohort of Goldwater Scholars in late March. Disciplinary panels of accomplished research faculty will review applications and select winners.

Approximately 400 Goldwater Scholarships are likely to be awarded in the 2022 cycle. Each awardee receives $7,500 in tuition support and access to professional development resources, including the Goldwater Alumni Network.

ASU ranks 29th in the United States for Goldwater Scholars, with 22, ahead of Cornell, Duke, Purdue and Carnegie Mellon.

Sprints, jumps, and vaults on display for third meet in New Mexico ... Sprints, jumps, and vaults on display for third meet in New Mexico