The American Association for the Advancement of Science (AAAS), the world’s largest general scientific society and publisher of the Science family of journals, has elected Enrique Vivoni from Arizona State University to the newest class of AAAS Fellows, among the most distinct honors within the scientific community. 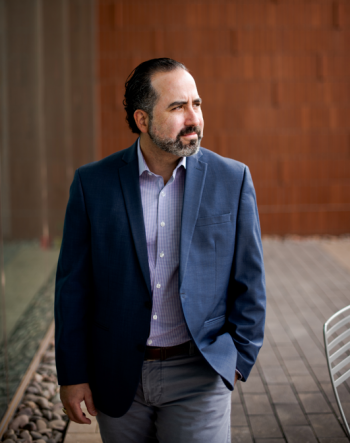 Vivoni, who is a professor at ASU’s School of Earth and Space Exploration and the School of Sustainable Engineering and the Built Environment in the Ira A. Fulton Schools of Engineering, is being honored by the AAAS Council for outstanding achievements integrating scientific, engineering and sustainability principles in water resources management.

Vivoni’s research focuses on hydrologic processes and their interactions with ecologic and atmospheric phenomena, with an emphasis on semiarid and arid regions of North America. Over the course of his career, he has pursued fundamental research in the hydrology of natural and urban systems, and linked the work to sustainability and resource management. In addition, his work on the U.S.-Mexico border region has led to sustained binational collaborations.

“Professor Vivoni is a leader in the area of water resource management, especially in the context of climate change and sociopolitical interactions,” said Meenakshi Wadhwa, School of Earth and Space Exploration director. “We are thrilled that he is being recognized for his work in this area.”

Vivoni has won a number of local and national awards in recognition for the interdisciplinary nature of his work on water, climate and landscapes of North American deserts. These awards include serving twice as the Fulbright-Garcia Robles Scholar, the Leopold Leadership Fellowship, the Huber Prize for Civil Engineering Research, the Quentin Mees Research Award from the Arizona Water Association and the Presidential Early Career Award for Scientists and Engineers.

“I view my research as representing ASU’s approach of interdisciplinary, use-inspired global impact, which is closely aligned with the AAAS mission,” Vivoni said. “As such, it is quite humbling to be recognized as a fellow of AAAS, as this adds a new set of responsibilities to scale up ASU’s hydrologic science, engineering and sustainability efforts for the benefit of society.”

Arizona State University's Interplanetary Initiative is now accepting nominations for its 2022 CubeSat Delivery Prize. The prize will recognize an outstanding achievement by a novice team launching a CubeSat in order to encourage new groups or underrepresented people or schools to engage in space education and promote CubeSat education.Eligible teams may come from a school or country that does not...

Arizona State University's Interplanetary Initiative is now accepting nominations for its 2022 CubeSat Delivery Prize. The prize will recognize an outstanding achievement by a novice team launching a CubeSat in order to encourage new groups or underrepresented people or schools to engage in space education and promote CubeSat education.

Eligible teams may come from a school or country that does not have a track record of successful missions, have overcome adversity, have launched a mission that creates a compelling educational opportunity or have engaged a unique coalition of collaborators. 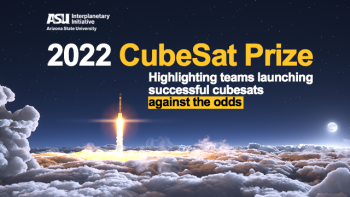 Teams may self-nominate or nominate another team. Learn more and share your story here.

Nominees will be reviewed and scored by an expert evaluation panel. The winner will be announced in May 2022.

The winning team will receive a cash prize of $7,500 and its story will be shared with the world through ASU’s communications channels, the Interplanetary Initiative’s social media channels and newsletter, reaching thousands of people, and a guest spot on the "Mission: Interplanetary" podcast.

“Delivering a working spacecraft for launch is a huge victory for any non-professional team. This award shows our appreciation for the kind of effort this represents,” said Danny Jacobs, associate director of the Interplanetary Initiative.

The award was made possible thanks to the generosity of the Shojaee Foundation.

The Interplanetary Initiative at Arizona State University engages broadly across disciplines and sectors to create an interplanetary future built upon cooperative and inclusive new structures, systems and perspectives. We study and solve the big social and systems questions that pave our future in space. The Interplanetary Initiative most recently announced a collaboration with Blue Origin and other space leaders to build Orbital Reef, a premier, mixed-use space station in low Earth orbit designed to open multiple new markets in space.