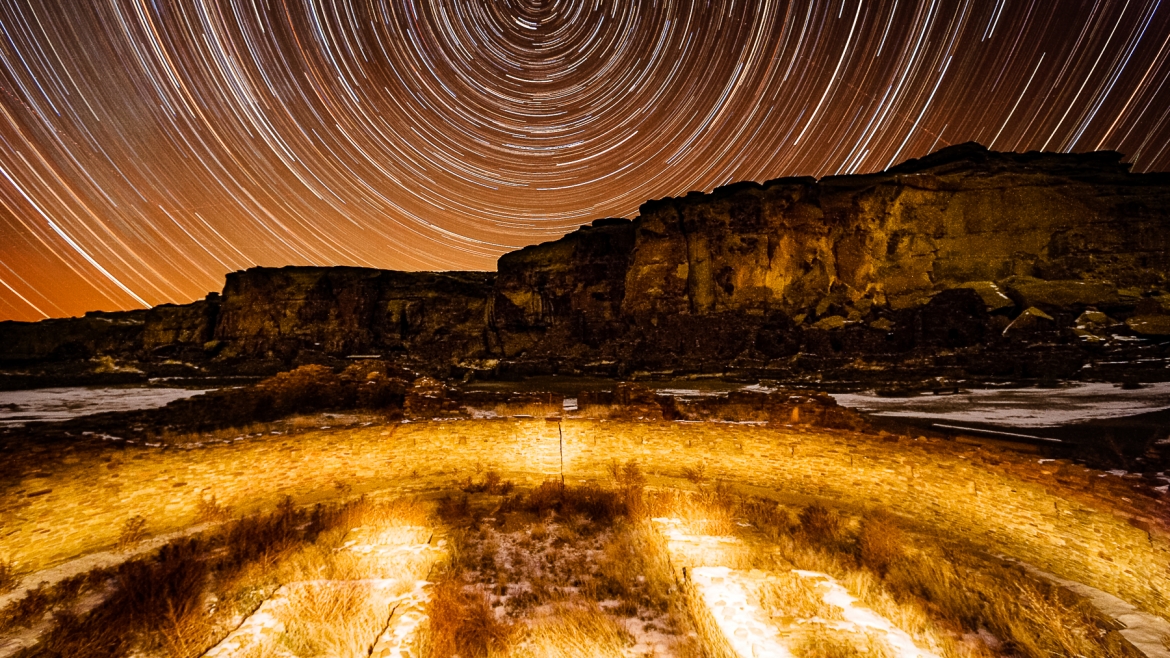 Returning to the historical treasure of Chaco Canyon

ASU archaeologist works on the center of the ancestral Puebloan world

In a remote canyon in northwestern New Mexico sits one of America’s greatest historical treasures — and one of the Southwest’s greatest mysteries.

Chaco Canyon was the center of the ancestral Puebloan world, home to immense great houses as high as five stories tall and containing as many as 800 rooms, cavernous kivas built so that dancers appeared to rise out of fires during ceremonies, engineered roads, a prehistoric observatory and systems for communication.

Between A.D. 850 and 1150, Chaco flourished, inspiring imitation in construction and design throughout the region. By about 1150 A.D. the major construction projects stopped and population declined dramatically for centuries. Some of the buildings were the largest structures in North America ever built until the 19th century.

Today it is a sacred ancestral landscape to the Pueblos of New Mexico and Arizona, the Dine’ (Navajo) and many other groups in the Southwest. It is a UNESCO World Heritage Site and a national park. 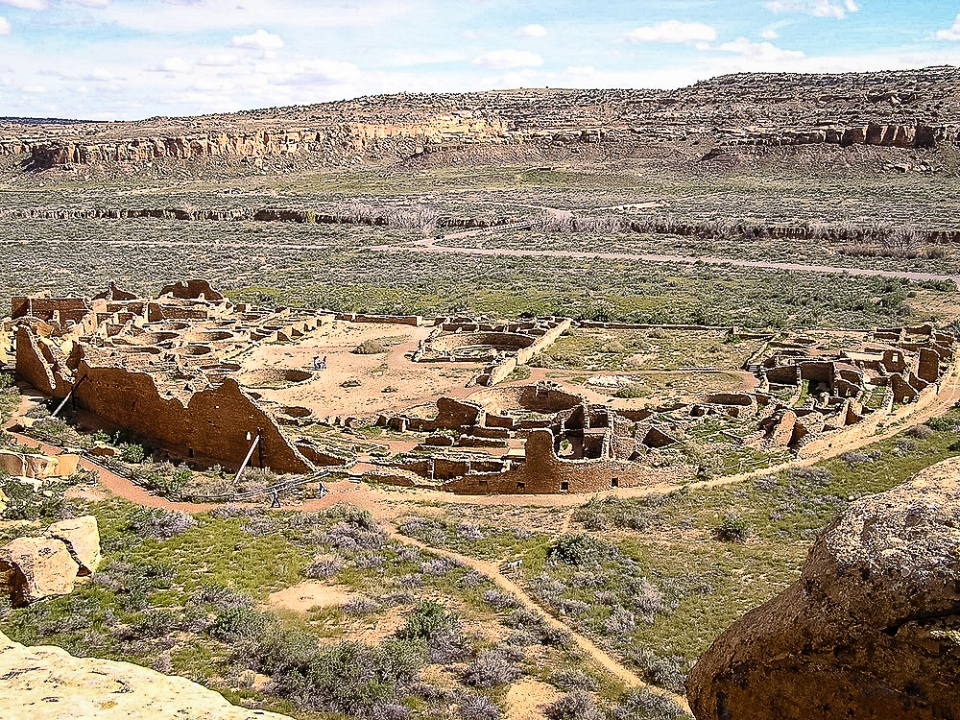 An Arizona State University archaeologist continues to study the mysteries of Chaco today, as part of a team recently funded by the National Science Foundation for the fourth time.

Matt Peeples, an associate professor of anthropology and the director of the Center for Archaeology and Society in the School of Human Evolution and Social Change has been involved with the Southwest Social Networks Project since 2011.

“It involves compiling information published in the past from all over the Southwest,” Peeples said. “Essentially, we're gathering information on the kinds of things people made and used at sites that have Chacoan architecture across the Southwest.”

The project gathers information on ceramics, lithic materials and things like obsidian that can be tracked to specific sources so archaeologists can better understand connections between different areas of the Southwest that all seemed to have connections to Chaco.

“We're starting to get a better understanding of Chaco as a place that had connections to many different parts of the Southwest, but not all at the same time,” Peeples said. “There were shifting patterns of interactions with the broader Colorado Plateau and even beyond, through time. It seems early on, a lot of the connection and influence was to the south and areas down even to the Arizona Mogollon mountains. And later in time, we see connections to the north, toward the area near Mesa Verde National Park.

"With better data, we're starting to be able to parse that out how those connections change through time across decades. So rather than just seeing it as a big smear of influence across an entire region through time, we're seeing the shifting connections and directions of influence over the course of the century-and-a-half that Chaco was at its peak.”

Peeples cautioned there are a lot of different ideas about this, and it’s far from a settled question.

There are strong economic connections between the Chacoan world and Chaco proper. Pottery comes in from different areas, but doesn’t leave Chaco in the same way. Trees for construction come from the Zuni Mountains to the south, the Chuska Mountains to the west and the San Juan Mountains to the north.

People engaged in different ways in their connection with Chaco.

There’s evidence of ritual and religious connections from Chaco to outlying sites, as well as similar architecture. Design styles also spread out from the great city. Recently, Peeples and his colleagues explored Dogoszhi style pottery, characterized by beautiful hash marks in designs. It’s long been seen as a hallmark of Chacoan influence in various parts of the Southwest.

“Through time, what we saw is that the distribution of those designs is actually more restricted than the distribution of Chacoan architecture. So that suggests that different aspects of Chacoan culture were adopted — or not — by people at various scales. So it doesn't seem like there's a one-size-fits-all answer for what Chaco meant across the Southwest.”

People constructing buildings or painting pottery in the style of Chaco might have been saying, “We’re like Chaco over here,” or “This is how it’s done in Chaco.”

There are Chaco-style structures all over the Southwest, some with strong ties to the city. At Aztec National Monument, layouts mirror those at Chaco. There is evidence that materials moved back and forth between the two places.

“Aztec seems to be a place that takes the mantle of Chaco in a little bit of a later era,” Peeples said.

In other places, the construction is Chaco-inspired, but there is little other evidence connecting the site to the city.

“So it may have been using the symbolism of Chaco and architecture for local ends rather than because of a direct connection to this distant place,” he said. 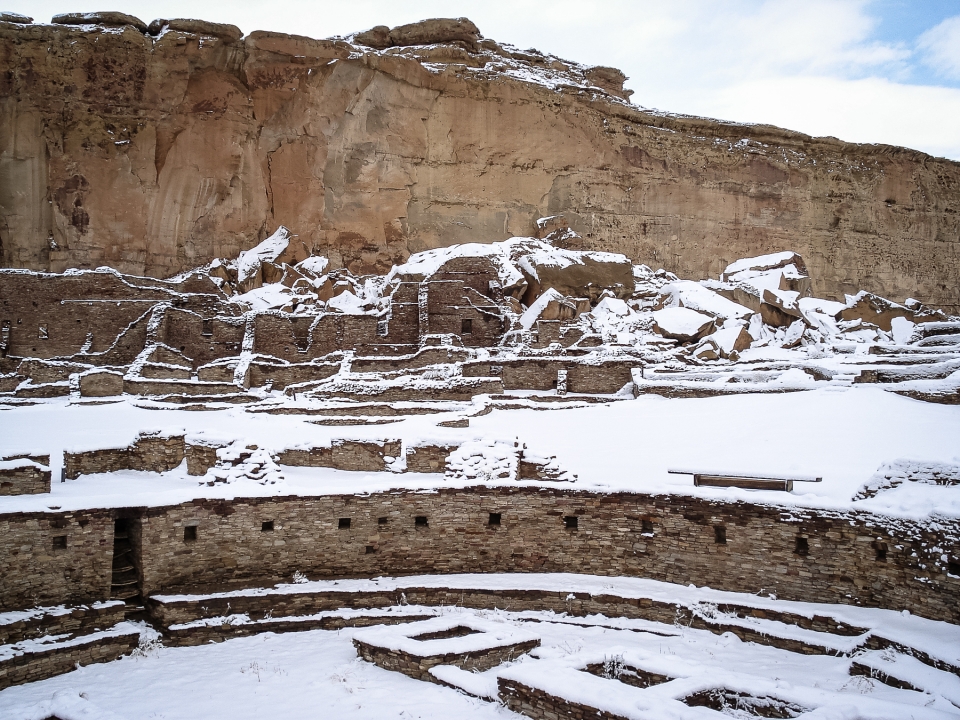 Pueblo Bonito in snow. Courtesy of the National Park Service

Pueblo Bonito, the biggest great house in the Southwest, had about 800 rooms. It wasn’t built all at once; as it was added on to, the deep rooms were used for storage and special uses. (One room was dedicated to red macaw parrots.) Archaeologists have counted the number of cooking hearths or compared them to contemporary room clusters in places like Hopi today. It suggests many of the great houses had relatively small resident populations.

“What we see is south of Chaco Wash on the south side of Chaco Canyon, there's a really large population of people living in what we call the small houses, essentially houses that are more typical of the rest of the Southwest,” Peeples said. “So there was a large resident population in the general Chaco Canyon area. But the great houses, you know, just because it's a 700-room pueblo doesn't mean it had a thousand people in it.”

What the Southwest Social Networks Project is compiling is information from published reports and notes — some of it a century old — and answering old questions with new data that brings up a host of other new questions.

“In our current grant, we've built a platform called CyberSW.org, which is a tool that helps other researchers and other interested people get access to these data,” Peeples said. “Our current National Science Foundation grant is working to see what we might be able to do at a smaller scale and to investigate patterns of interaction within individual villages and among households using similar methods.”

Arizona State University’s Biodesign Institute joins an international team led by the University of California San Diego School of Medicine to help unlock the causes of ulcerative colitis.Researchers have identified microbiome-derived proteases in the gut contributing to the disorder, inspiring new potential drug targets for inflammatory bowel disease.Ulcerative colitis, a subtype of inflammator...

Qiyun Zhu is a researcher in the Biodesign Center for Fundamental and Applied Microbiomics and ASU's School of Life Sciences. Download Full Image

Ulcerative colitis, a subtype of inflammatory bowel disease, is a chronic ailment of the colon affecting nearly 1 million individuals in the United States. It is thought to be linked to disruptions in the gut microbiome — the bacteria and other microbes that live inside us — but no existing treatments actually target these microorganisms.

In a study published in the current issue of the journal Nature Microbiology, the group identified a class of microbial enzymes that drive ulcerative colitis, and have demonstrated a potential route for therapeutic intervention.

“Our study demonstrates a strong correlation between enzymes produced by a particular species of gut microbiota known as Bacteroides vulgatus and the initiation of inflammatory bowel disease,” said Qiyun Zhu, a researcher in the Biodesign Center for Fundamental and Applied Microbiomics. “We also show that inhibiting B. vulgatus proteases may provide a new means of treating or preventing this disease.”

Although ongoing research has highlighted many correlations between gut health and constituents of the microbiome, such associations have, until now, little light has been shed on how bacteria cause diseases and how they may be treated.

“This is the first study with experimental evidence that pinpoints a specific microbe driving ulcerative colitis, the protein class it expresses and a promising solution,” said study co-senior author David J. Gonzalez, associate professor of pharmacology at University of California San Diego School of Medicine and Skaggs School of Pharmacy and Pharmaceutical Sciences.

The new research underscores the power of so-called multi-omics — an approach that combines state-of-the-art genomics, proteomics, metabolomics and peptidomics to uncover the contents of a biological sample with unprecedented detail. The process of “digitizing” a sample allows the team to examine its biology at multiple scales and develop new hypotheses of disease progression.

“This study showcases the power of combining these technologies to explore biology in new ways,” said study co-senior author Rob Knight, professor and director of the Center for Microbiome Innovation at UC San Diego.

Studies of the gut microbiome often extract biological data from patient stool. The technique can provide a wealth of vital information and is far less invasive to collect than more traditional blood or tissue samples.

“Once we had all the technology to digitize the stool, the question was, is this going to tell us what’s happening in these patients? The answer turned out to be yes,” Gonzales said. “We’ve shown that stool samples can be extremely informative in guiding our understanding of disease. Digitizing fecal material is the future.”

The presence of Bacteroides vulgatus led to colitis in the mouse colon (left). However, protease inhibition protected the walls of the colon and reduced influx of inflammatory cells (right). Photo courtesy UC San Diego

The team found that roughly 40% of ulcerative colitis patients show an overabundance of proteases — enzymes that break down other proteins — originating from the gut resident Bacteroides vulgatus. They then showed that transplanting high-protease feces from human patients into germ-free mice induced colitis in the animals. However, the colitis could be significantly reduced by treating the mice with protease inhibitors.

The team suggested that a stressor in the gut, such as nutrient deprivation, may increase protease production in an attempt to use proteins as an alternative nutrient source. However, these bacterial proteases may be damaging to the colonic epithelium or lining of the colon, allowing an influx of immune cells to then further exacerbate the disease.

Authors hope the study will inspire future work to confirm this hypothesis and develop protease-blocking drugs for use in humans. Now that a specific family of proteins has been implicated in this form of ulcerative colitis, they said, clinicians may also one day use antibody tests to quickly discern if a patient is a good candidate for protease treatment.

The researchers said their approach to stool analysis and multi-omic data integration might also be used to study other diseases, including diabetes, cancer, rheumatic and neurological conditions. 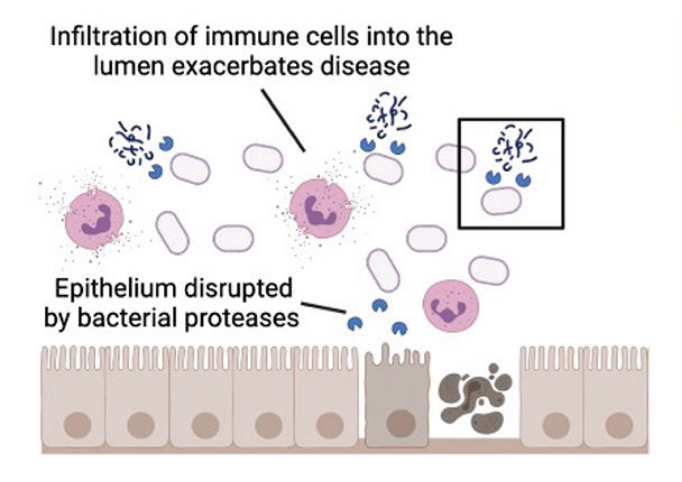 Researchers hypothesize that ulcerative colitis may be triggered by bacterial proteases that damage the colonic epithelium and allow an influx of immune cells to drive further inflammation. Photo courtesy UC San Diego

This research was funded in part by the National Institutes of Health (grants P30 DK120515, T32 DK007202), the American Gastroenterology Association and the Collaborative Center of Multiplexed Proteomics at UC San Diego.