Javid Qaem’s career path has taken him near and far, not merely geographically, but in the many ways that he has served.A medical doctor from Afghanistan, he came to the United States to study at Arizona State University’s School of Public Affairs. A few years later, he was his country’s ambassador to China. Now he is back at ASU, where he is a School of Public Affairs professor of practice....

Javid Qaem’s career path has taken him near and far, not merely geographically, but in the many ways that he has served. 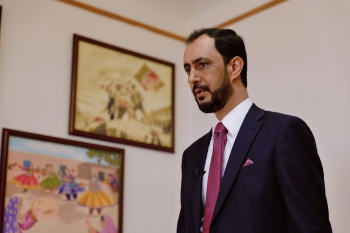 Javid Qaem, today a professor of practice in the ASU School of Public Affairs, was Afghanistan's ambassador to China from 2017 to 2019. Photo courtesy of Javid Qaem Download Full Image

Qaem grew up in Kabul, Afghanistan, where he also became a physician before earning a Master of Public Administration degree from ASU in 2012. As ambassador from 2019 to 2021, he negotiated for shipments of medical supplies during the COVID-19 pandemic and assisted Afghan citizens living in China.

He said that being an ASU student was one of the best experiences he ever had.

“Though I did my master’s studies here, it was both basic and advanced studies,” Qaem said. “I studied medicine as my undergraduate degree, so my Master of Public Administration degree was my real time to learn about politics, governance and administration. It built my theoretical foundation, which prepared me for my future practical tasks.”

As a child, Qaem and his friends played in the streets of Kabul, as there were no smartphones or home computers. But those streets were hazardous places to be in the war-ravaged nation. They were full of tragedies, he said.

“We were experiencing war on daily basis. Every day, rockets would land somewhere around us,” Qaem said. “Many days, we would experience the sound of rockets while going to or coming back from school. The blind rockets would hit homes or shops of ordinary people. I lost my best friend and an uncle to one of those rockets.”

The Taliban took over Afghanistan in 2021 and Qaem moved from Beijing to Phoenix.

As a prominent alumnus, Qaem will also be delivering guest lectures in a public policy analysis (PAF 505) class, and will serve on the school's Academic Advisory Council, a group of influential local leaders in the public sector and prominent alumni, Siegel said.

Read on to learn more about Qaem and his journey back to ASU.

Question: Tell us about yourself and your life in Afghanistan.

Answer: I was born in a province called Helmand, in the south of Afghanistan, in a family of doctors — my mom and dad are both doctors. However, I lived almost all my life in Kabul, the capital of Afghanistan. I also studied medicine at Kabul Medical University.

Q: Tell us about your time as your country’s ambassador to China, memories that remain with you and your most significant accomplishments? 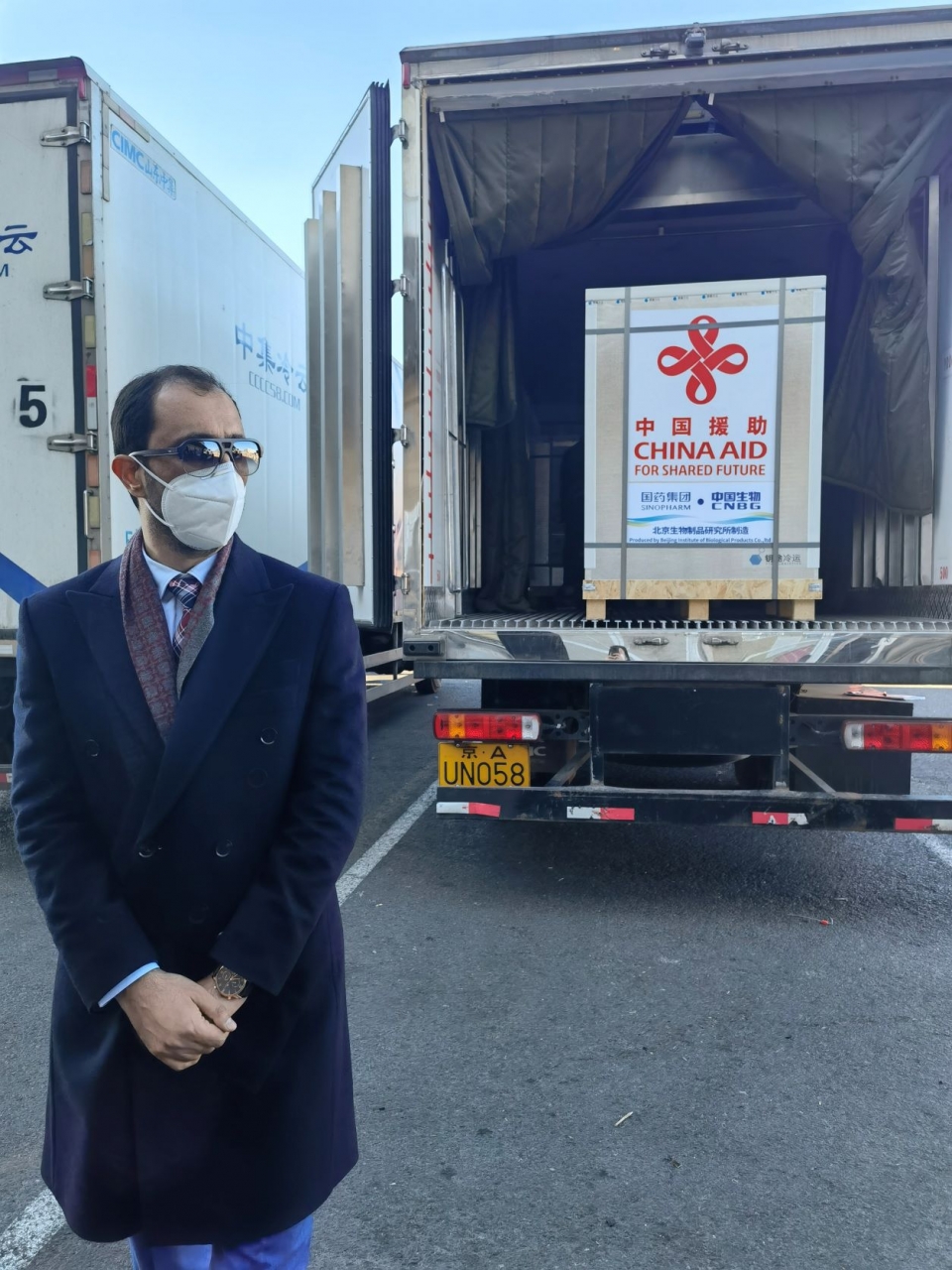 Javid Qaem stands beside a truck loaded with medical supplies from China to be shipped to Afghanistan during the COVID-19 pandemic. Photo courtesy of Javid Qaem

A: It was a lifetime honor to represent my country and my people!

I went there in a very critical time. I arrived in November 2019 and the COVID pandemic started in January 2020. Those were special times. I had to deal with emergencies almost all the time. I had students stuck in Wuhan, China. We had to take care of them physically and emotionally. We also had Afghan businessmen in other cities of China, so we had to respond to their needs as well.

In the middle of 2020, COVID reached Afghanistan. It hit us hard. China was the only country at that time that could produce medical supplies for COVID patients. Every other country needed all these medical supplies. It was a rush. I was responsible for finding donations on one side and procuring these goods on the other side. We really had to work hard 24/7. Luckily, I was able to secure a lot of donations and I was able to send them back to Afghanistan.

It was also special from the diplomatic and political perspective. I was representing a government that was close to the United States. In the meantime, China was meeting with representatives of the Taliban. I had to manage the relationship and promote our point of view. And on the top of that, I had to do all this diplomatic work during COVID, where physical contact was not allowed and I had to do everything through online means.

Q: How did your time at the Watts College’s School of Public Affairs prepare you for life after college?

A: The Watts College is a big college that gives you the opportunity to take various classes. In addition, ASU is even bigger, and one has tons of choices of classes to study. The good thing about Watts College is that the staff and teachers are so kind and try their best to help you choose the classes that are beneficial for one’s future. This happened to me as well. My academic adviser helped me take classes in different schools that I felt were good for my future.

In addition, the diversity one finds at classes at the Watts College is remarkable. I had class fellows from Nigeria, Russia, Morocco, Ukraine, Mexico and the United States. Knowing these many people from different parts of the world enriches your experience. One hears different perspectives and ideas. Furthermore, the quality of the teachers and classes are remarkable. The Watts College has teachers from both academia and from practical sectors, such as a mayor’s office or the governor’s office. It helps you understand the theory and practice of public policy and administration in the class.

Q: Why did you choose ASU, first as a student, then as a professor?

A: As a student, I did not choose ASU. I am a Fulbright Scholar and the Fulbright authorities chose it. But I was happy to be going to a school, the ASU School of Public Affairs, that is in the top 20 best schools in the United States.

However, as a professor, I did choose ASU. First, it was like coming home. I had been here before and I enjoyed every minute of my time. I liked the people and I was a good friend to them. So coming to ASU was like coming back to my good old days. In addition, ASU is one of the best schools, and it does open the door for many other opportunities. It did for me when I studied here. I am sure ASU will do it again when I teach here. Third, the resources available at ASU are fabulous. There are abundant chances of growth and learning. Finally, the people in Arizona are friendly and welcoming. They have their own character. I am thrilled that I am here again.

Q: Which professor(s) taught you the most important lesson while you were a student at ASU? Are you still in touch with him/her/them?

A: There are many things that I can mention about ASU, but the most prominent one is the quality of its professors. Every single one of them is better than the other. I am not in a position to tell you which professor taught me the most important lesson, but I can tell you that I learned from each one of them and I loved each one of them. However, I am not in touch with all of them. It’s been 10 years since I left ASU. I am in touch with only a couple of them. 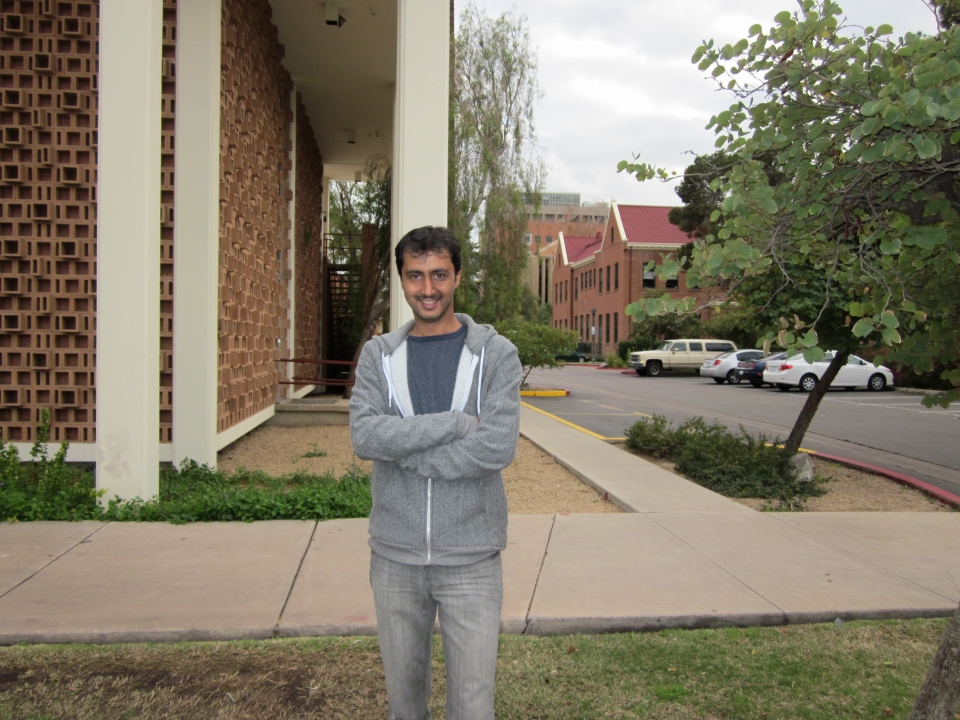 Javid Qaem at the ASU Tempe campus on a recent visit. Photo courtesy of Javid Qaem

A: Again, there so many things that I can mention that I learned. The two years of my master’s program were full of learning experiences. However, one thing that I can highlight here is the idea of critical thinking. In Afghanistan’s system of education, we did not have much chance of learning or applying critical thinking. We were supposed to learn whatever was in the book. It was different here. We were asked to think critically and comment on various articles written by famous scholars. This was a strange thing to do. I remember during the first weeks, I could not write even a paragraph about someone else’s article. Later on, I was able to think out of the box. I was able to analyze and make comments on articles and ideas. This gave me the confidence later on in my career to be able to analyze concepts, plans and policies. This would be one of the most important skills that I learned at ASU.

Q: If you had college to experience all over again, what would you do differently? The same?

A: I would not change a bit of it. You know, selection for Fulbright is a rigorous process. One has to go through many stages and exams to get selected. One of the last exams is the Test of English as a Foreign Language (TOEFL) to check one’s level of English. The people who score a bit less than the requirement but are good in other sectors are sent three months earlier to study language before they start classes. I, unfortunately, scored high in TOEFL. So, I was not given the three-month preparation course. I came and started my classes.

Next time, I will score a bit low so I would get the chance to stay at ASU for three months extra, haha.

Q: You are also a medical doctor. How has your training in medicine affected your career in diplomacy and now, as you start teaching here at ASU?

A: In our system in Afghanistan, we had to go through an entrance exam to enter a university. Medicine requires the highest score at the exam. Every student wants to go to medical college, as it has prestige and somehow a secured future. Normally, the best ones go to medical college.

Studying medicine is tough. It requires a lot of discipline and hard work. This is probably the biggest lesson and skill the medical college gave me. In addition to understanding human body and nature, it prepared me for the life ahead. On the technical side, it helped me how to deal with humans, how to be patient with them and how everyone is different from each other and these differences are the beauty of human nature.

Q: If you were given a $40 million grant to spend on solving a problem facing the world, what problem would it be and why?