New Year’s is often a reset for people. It’s a chance to make resolutions or set intentions and goals for the days, weeks and months ahead. For many Americans, those goals typically include focusing on physical health and well-being.

Whether you fall into this category or not, Arizona State University's Edson College of Nursing and Health Innovation Professor Fang Yu says there’s one health-related item we should all be prioritizing: our brain health. As we age, our cognition goes through natural decline, but it's important to know what is normal and what is not. Image from Canva Download Full Image

“I think memory and cognition are a unique gift as human beings — that’s who we are; that’s how we identify ourselves,” said Yu.

And she says the beginning of the year serves as a great marker to measure your memory to see if there has been any change or decline over the previous 365 days.

Below she offers a couple of simple but effective things anyone can do to see if there’s a need to be concerned and seek out professional help.

First, Yu, who is also the Edson Chair in Dementia Translational Nursing Science, says you can try a recall test.

“Think about something you did last week, ideally with another person who can corroborate what you did. Then recall what happened, where you were, who you were with, what topics you discussed, and then compare your memory with theirs,” she said.

Another common cognitive test is to write down a list of a few items and then try to recite them over extended periods of time, starting with five minutes and then giving it another 20–30 minutes to see how many you get right.

Yu says if you’re not easily getting most of them right, there may be something worth exploring. However, she cautions against self-diagnosing or overreacting.

“Everyone is getting older as every new year comes, and our cognition goes through natural decline. We all have memory slips; the key difference is whether or not you’re able to remember what happens later, even if you can’t recall it now. Sometimes at the moment I needed it, I couldn’t access that memory, but an hour later I remembered everything,” said Yu.

While these quick tests are a good idea for all adults, it’s especially important for those 65 and older because age is the single biggest risk factor for cognitive decline due to Alzheimer’s disease and related dementias.

That number may more than double by 2050 to a projected 12.7 million without medical breakthroughs to prevent, slow or cure the disease.

Yu has dedicated her research career to finding a breakthrough.

“People who have Alzheimer’s dementia hate this condition. Many people around the world report it as the worst disease you can have because it robs people of their identity; it robs who you are. So anything we can do to prevent that from happening is the goal,” she said.

For the last 15 years, she has focused her studies around exercise, investigating whether it can be used as a successful intervention to delay cognitive decline and/or prevent Alzheimer’s dementia.

Early in 2021, she published promising findings from a recent study.

“Our primary finding indicates that six-month exercise significantly reduced cognitive decline in comparison to the natural course of changes for Alzheimer’s dementia,” Yu said at the time.

Now she’s actively recruiting for a new study that builds off the previous one.

The ACT Trial will explore how exercise and brain training affects memory and brain function in people who have mild cognitive impairment, or MCI. Yu says MCI puts people at a greater risk of developing Alzheimer’s down the road.

In order to apply any findings widely, Yu and her team are dedicated to finding a diverse group of people all over the age of 65 in the greater Phoenix area to join the study.

“We hope we can recruit participants representative of Arizona’s demographics so we can say, 'OK, this is likely applied to all Arizonans.' But if we have a very limited sample that only certain groups are included in, then we will never know if it applies to the different groups. So we want people from all backgrounds to participate,” said Yu.

To learn more about the ACT Trial and see whether you’re eligible to join, visit the study's website: www.theacttrial.com.

The mood was festive at Desert Financial Arena in Tempe where ASU College of Health Solutions students, their families and friends gathered to mark the milestone of graduation, the first time a convocation ceremony has been held in person since 2019.With masks on and physical distancing observed, almost 500 students processed, along with Health Solutions faculty and staff, at a Dec. 16 ceremony ma... 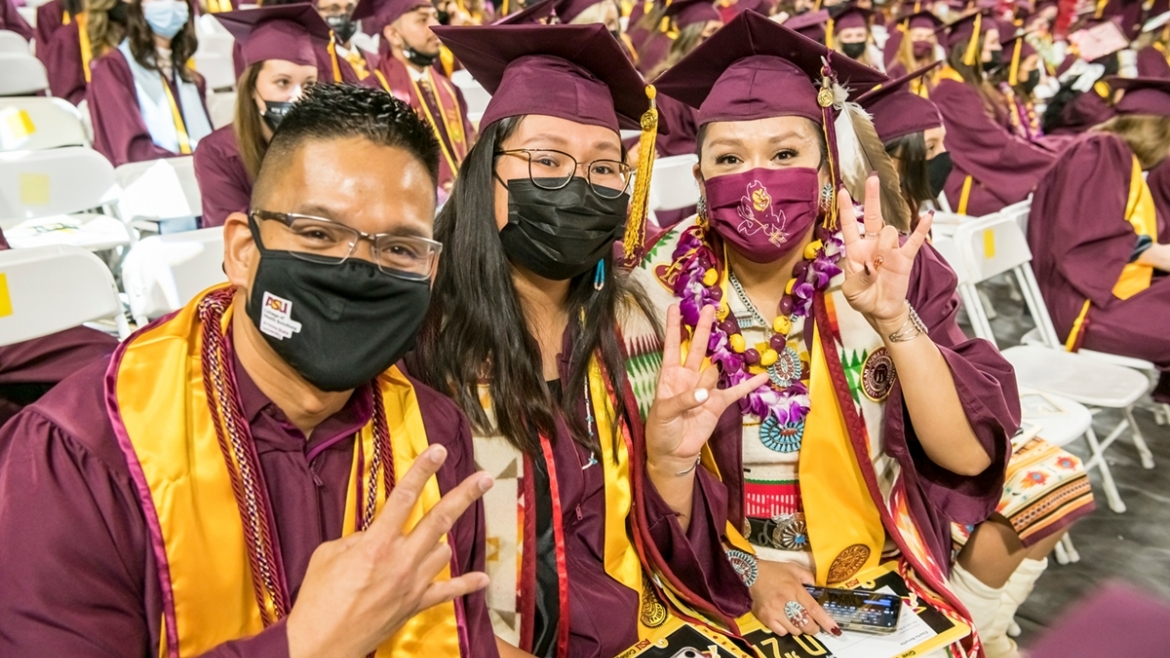 The mood was festive at Desert Financial Arena in Tempe where ASU College of Health Solutions students, their families and friends gathered to mark the milestone of graduation, the first time a convocation ceremony has been held in person since 2019.

With masks on and physical distancing observed, almost 500 students processed, along with Health Solutions faculty and staff, at a Dec. 16 ceremony marked by more bursts of applause than usual as graduates and guests alike expressed their joy at being able to be together to celebrate. Some 2020 and spring 2021 grads also came to walk the stage since the COVID-19 pandemic had limited their graduations to virtual or hybrid ceremonies.

Deborah Helitzer, dean of the College of Health Solutions, addressed the crowd, noting the collective experience of living and learning through a pandemic as well as the training and support students received to prepare them to improve health.

“I am truly in awe of all that your generation is already doing to make a difference in the world of health, and I’m confident the future of health is in your very capable hands,” she said.

Keynote speaker Jeff Taylor echoed a similar view about the transformative power of health professionals. A top-ranked Arizona collegiate football player whose life spiraled out of control after a career-ending injury led to addiction, homelessness and prison, Taylor said it was dedicated behavioral health professionals who finally helped him turn his life around.

“I’m here to thank the educators because they taught the professionals who saved my life, and as a result, my 22-year-old son, who is here today, has never known his father to be under the influence of drugs or alcohol. You have created a miracle,” he said.

Today Taylor is a registered lobbyist and national speaker who writes and promotes policies and laws to combat homelessness and reduce recidivism among Arizona’s prison population.

Relive Fall 2021 Convocation in the livestream recording of the ceremony, and enjoy this special celebration video.

Meet some of the College of Health Solutions' most impressive health leaders:

Read about the career journeys of some of the college's graduates:

And below, learn about the plans graduates shared on the College of Health Solutions' social media channels. Hawa Maiwand earned her BS in nutrition with a concentration in dietetics and is off to a dietetics internship at the Louis Stokes Cleveland Department of Veterans Affairs Medical Center while she pursues her master’s degree at Case Western Reserve University. 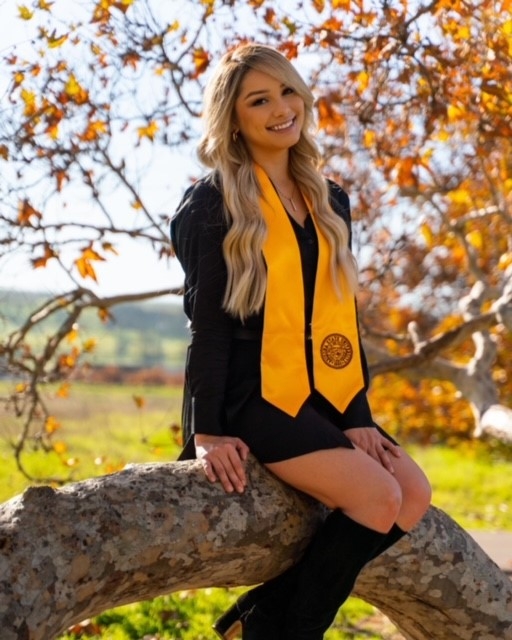 Jade Valencia graduated with a bachelor’s degree in speech and hearing science and is applying to speech-language pathology master’s programs, aiming to focus in pediatrics. 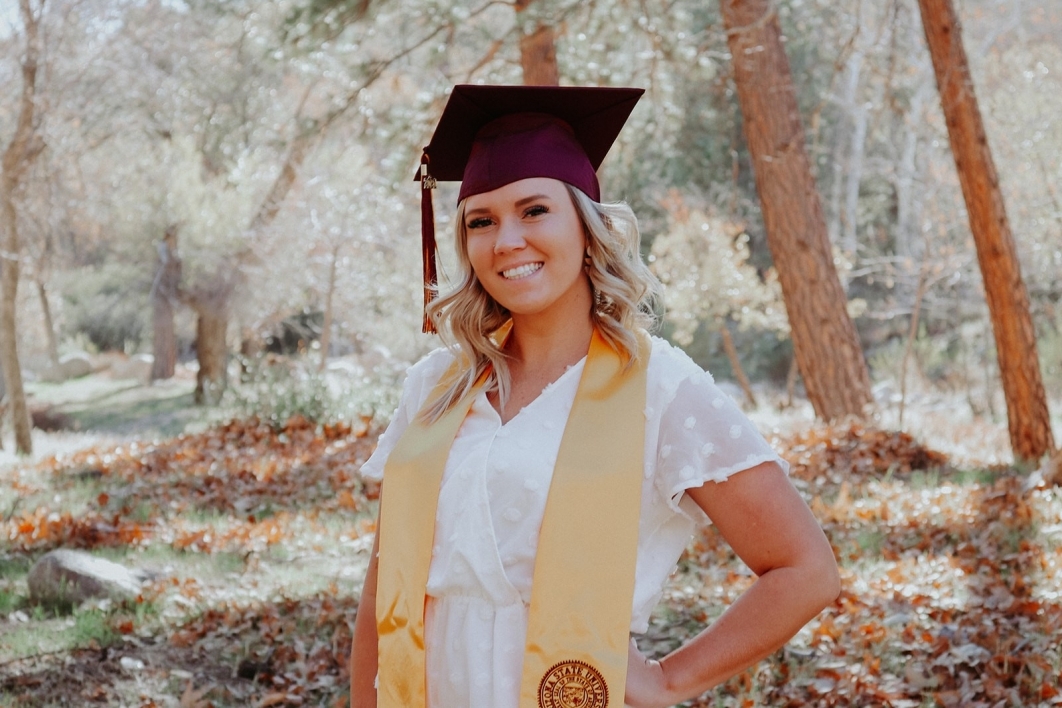 Natalya Fajardo attended ASU as an online student in the Bachelor of Science in health sciences program and said she loved every minute of it. In January, she’ll begin her journey to become a chiropractor at Southern California University of Health Sciences. 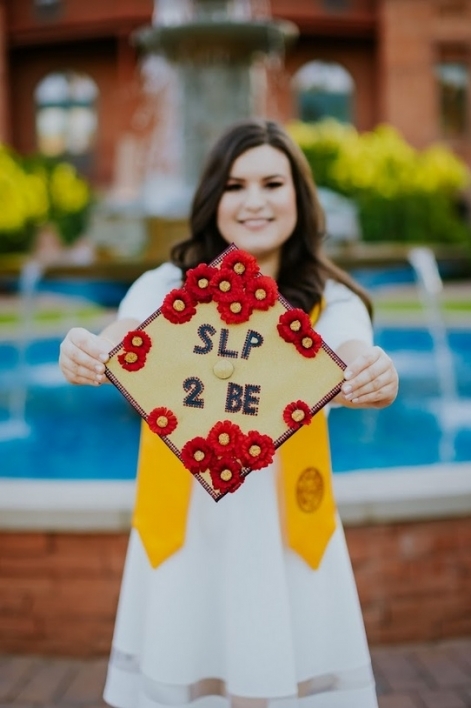 Danelle Tucker is starting her high-performance training career at Redline Athletics after earning her Bachelor of Science in sports science and performance programming. 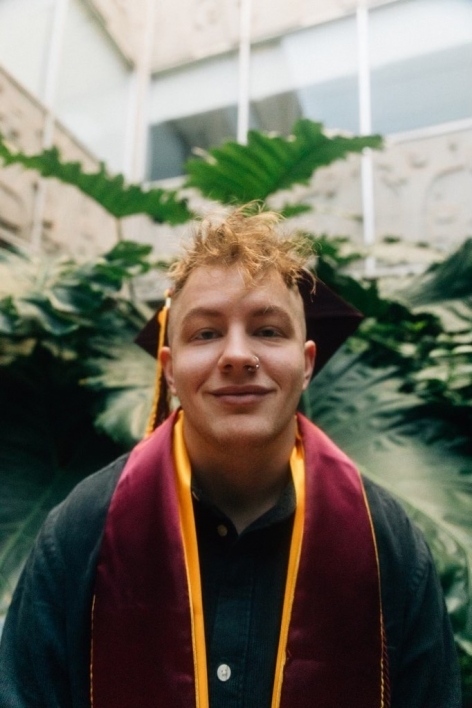 Skylar Birch earned a degree in medical studies and is applying to dental schools. Meanwhile, he’s planning to use his skills in a microbiology lab or a hospital as a technician. 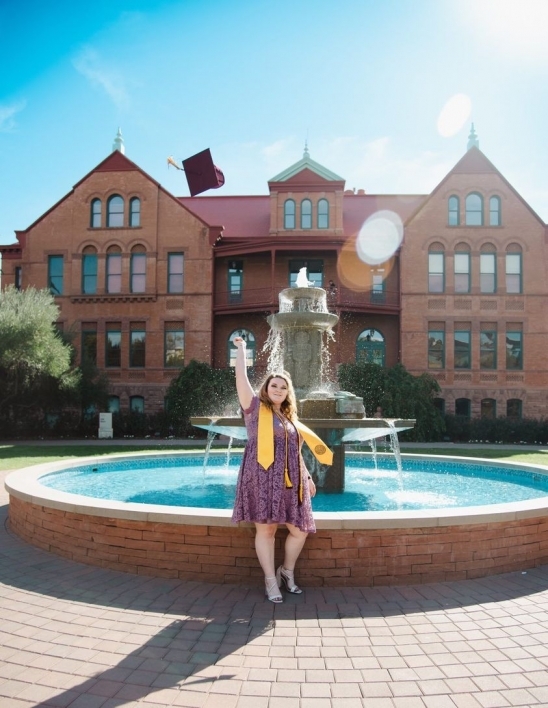 Emily Onwiler’s experience caring for her grandfather who had Lewy body dementia led her to pursue a certificate in hospice and palliative care from the College of Health Solutions to fulfill her dream of improving the health and well-being of older adults. After earning her degree in medical studies, Hiba Alobaidi is headed to the University of Arizona’s College of Medicine with the goal of becoming a pediatrician. 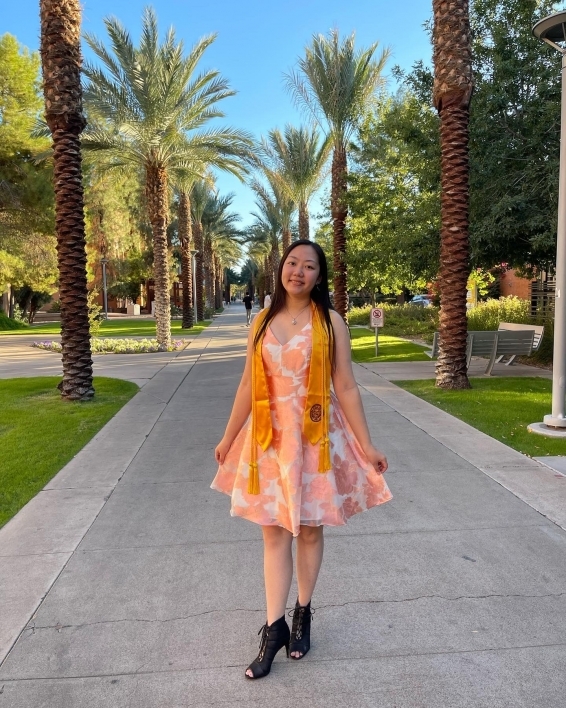 After earning her BS in medical studies and a minor in business, Kirsten Wang is taking a gap year to study for the Dental Admission Test and apply to dental schools. 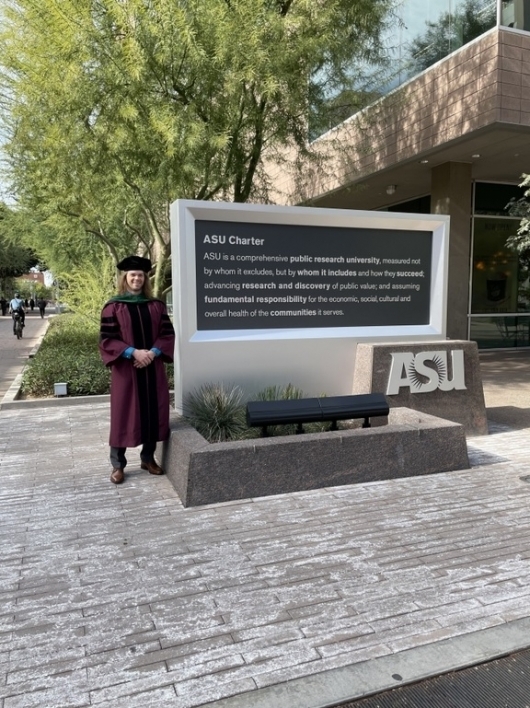 Mallory Zembower joined this year’s in-person convocation ceremony after graduating in December 2020 with her medical studies degree and is already on her way to fulfilling her dream of being a doctor. She is currently a first-year medical student at A.T. Still University School of Osteopathic Medicine with plans to work in emergency medicine in a rural community.