“Do we belong together?” This question can lead to passionate discussions about the status of romantic relationships. A study from the Arizona State University Department of Psychology has identified neural signatures that occur between romantically involved couples as they work to answer that question. The research, which was recently published in Social, Cognitive and Affective Neuroscien...

“Do we belong together?” This question can lead to passionate discussions about the status of romantic relationships.

A study from the Arizona State University Department of Psychology has identified neural signatures that occur between romantically involved couples as they work to answer that question. The research, which was recently published in Social, Cognitive and Affective Neuroscience, used electroencephalography (EEG) to measure brain electrical activity from both members of a romantic couple as they assessed the status of their romantic relationship. 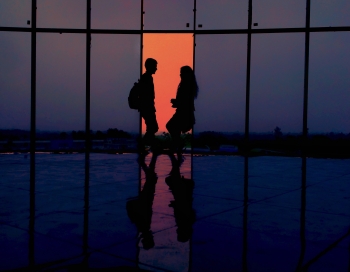 A study from the Arizona State University Department of Psychology has identified neural signatures that occur between romantically involved couples as indicative of how they fit as a couple. Photo by Niloy Biswas/Unsplash Download Full Image

The study included 49 romantically involved couples who had been dating for less than a year. Each couple was fitted with an EEG cap, which let the research team simultaneously measure the electrical activity from both of their brains. This type of measurement is called dyadic EEG.

The research team focused on a specific brain signal called the P300 that tracks thought processes while making decisions, such as how to evaluate social feedback.

During the EEG collection, the couples answered questions about characteristics of their relationship, like whether they match on communication style, intimacy and physical attraction. Participants then saw their romantic partner’s answers, as well as answers from a fictitious group of peers who were described as relationship experts.

“We included answers from these two sources to investigate which answers about relationship fit were more important – those from fictitious relationship experts or those from romantic partners,” Ha said.

“This finding suggests that people are getting ready for what is coming: They are attentive to the answers that they are about to receive, which was especially strong when they had doubts about relationship compatibility,” Ha said. “In our daily lives, there is an abundance of relationship feedback from all sorts of sources – friends, partners and social media are just a few. And it would be very costly in terms of cognitive and emotional resources if we were to pay attention to all incoming relationship feedback. These results may imply that we selectively pay more attention to upcoming relationship information when we are unsure about certain aspects of our romantic relationships.”

The research team also assessed brain activity when the answers from the fictive peers and their romantic partner were revealed.

When a participant learned their answer matched their romantic partner’s answer, the P300 was bigger than when the couple disagreed. This was true whether couples agreed they both fit a relationship characteristic or whether they agreed they did not match. This pattern of brain responses was especially strong for relationships in which one or both members desired to keep the status vague.

“Relationship ambiguity affected the size of the P300 response: It was bigger for couples who didn’t want to commit and wanted to keep the relationship ambiguous,” Ha said. “These findings suggest that we are especially attuned to our partner’s feedback when we are not clear about their commitment, and suggests that we pay a lot of attention to both congruous positive and negative feedback from our romantic partners. Maybe we are trying to figure out the future of the relationship, if we should invest more in the relationship or not.”

The feedback from fictitious peers did not matter in this phase of the experiment, unlike when participants were awaiting answers.

“When relationships are established, what your partner is giving you as feedback about relationship compatibility is more important than peers,” Ha said. “This finding is important because most research has focused on peer feedback.”

Ryan Hampton, a recent graduate of the psychology department, contributed equally to the study.