Montoya graduated from ASU in 2012 with a Bachelor of Arts in political science and Bachelor of Arts in transborder studies, as well as a minor in dance. She is also a graduate of Grand Canyon University and Harvard University’s Kennedy School, where she earned a certificate in the Exponential Fundraising Program. 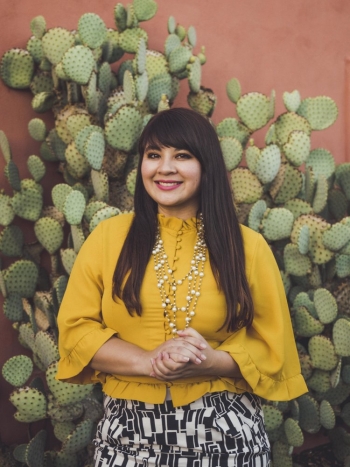 Born in Tijuana, Mexico, Montoya and her family migrated to Arizona when she was young in order to flee violence. As a sophomore in high school living in Mesa, she was in awe of ASU and knew that was where she wanted to pursue a college education.

“It was difficult navigating the process of applying to college as undocumented and a first-generation college student,” Montoya said.

However, attending ASU affected her life in many positive ways.

During college, Montoya was able to find her voice. She remembers participating in class discussions where her peers would discuss the top news stories, specifically the focus around immigration and showing your papers.

“It was a strange situation to be in,” Montoya saod. “My peers were debating immigration, but they did not realize they were talking about me and experiences I’d had.”

The classroom discussions could have weighed on some, but for Montoya, she took it as an opportunity to learn the opinions and viewpoints of fellow classmates.

“At ASU, I felt I had the support of educators and peers who cared about me,” she said. “I was able to navigate a complex, changing world and stay grounded while I was becoming the person I am today.”

In 2016, after working as a classroom educator, Montoya created the Aliento Education Fund, a nonprofit leadership organization that serves undocumented, DACA and mixed-immigration-status families to transform trauma into hope and action.

Montoya describes Aliento as part of her own journey as a dreamer in Arizona.

“Schools weren’t there to support people like me who had to survive the trauma of separation and deportation,” she said. “Every day, I was unsure if I would be deported from the place I call home.”

When her own father was going through the deportation process, she was lonely, fearful and angry, yet no one focused on the well-being of the children. She saw a gap between people leading the change and people who were being impacted by immigration issues. Through her personal experience and guidance from a mentor who suggested she follow her passion, she was encouraged to create her own organization.

“Never in my wildest dreams did I think I would be running a nonprofit as an undocumented immigrant,” Montoya said.

Her entrepreneurship, leadership and dedication to her community has led to her receiving numerous accolades including the Forbes 30 Under 30, Univisión 15 Latinas Changing the World, the Phoenix Chamber ATHENA Award and the Humanitarian Recipient Award for Spirtuality by the Muhammed Ali Center.

“It has been a very difficult moment for society reflecting on the pandemic — there has been a lot of grief and pain,” she said. “We have seen both the best and worst in people. As you graduate and continue to celebrate this milestone, I hope you don’t forget that everyone has a unique light to share. Our skills, experiences and relationships form who we are. We have the choice to be a light in the darkness.”

When crossing the street at Arizona State University’s Tempe campus, you may have noticed blue light poles placed along the sidewalks. While these poles primarily function as emergency call boxes for faculty and students, they also offer strategic positioning for smart technology. Smart technology refers to self-monitoring, analysis and reporting technology (SMART). And today, this type of ...

When crossing the street at Arizona State University’s Tempe campus, you may have noticed blue light poles placed along the sidewalks. While these poles primarily function as emergency call boxes for faculty and students, they also offer strategic positioning for smart technology.

Smart technology refers to self-monitoring, analysis and reporting technology (SMART). And today, this type of technology is highly integrated into our everyday lives — think of a smart doorbell, smartphone or even your Amazon Alexa. In a collaborative workshop, ASU research faculty across various fields and disciplines came together to evaluate how the data captured by the sensors could be used. One example that surfaced was combining the data from the sensors to inform a more environmentally friendly campus design that would ultimately improve the services and experiences of the community.

For example, the sensors in the poles can be used to take temperature readings over time. These readings can be used to determine where “heat islands,” which are urbanized areas that experience higher temperatures due to human activities, are being created around campus. In combination with the other sensors, this data can help design smarter environments, taking into account building location, car and pedestrian traffic, landscape and more.

IoT devices, like the ones fitted on the emergency blue light poles, require continuous connectivity to the internet. Today, ASU’s University Technology Office is leading a proof of concept with Amazon to test and deploy Amazon Sidewalk Bridge Pro, a new professional-grade Sidewalk Bridge. These router-like devices can be installed around campus to extend the existing Amazon Sidewalk network, which is a long-range, low-power wireless network used to keep low-bandwidth smart devices connected even when beyond the reach of Wi-Fi. Think of it as a separate wireless internet connection for smart devices on campus.

“Exploring sustainable and long-term solutions plays a critical role in advancing our smart technology initiatives, both on campus and within the community,” said Bobby Gray, UTO’s director of digital transformation. “The university is unique in that it is a space that encourages new ideas and disruptive technologies to be developed, tested and iterated upon quickly. Our ultimate goal is to deploy and test Sidewalk Bridge Pro in an effort to bring smart solutions to campus at scale and at lower costs.”

This network can help ASU and UTO technologists better scale the use of smart devices around the campus at a lower cost. For example, each of the three blue light poles that are currently equipped with sensors have wired internet connections that require installing fiber cables. Leveraging these existing internet connections, teams will install the Sidewalk Bridge Pro devices on these poles to create Sidewalk access points that can extend connectivity at far greater distances, reaching up to 5 miles. With Sidewalk Bridge Pro extending the connectivity to IoT devices, technologists and researchers can begin installing more sensors around campus quicker and without having to incur the costs of running fiber cables.

In addition, the network helps free up the university’s Wi-Fi for students and faculty to engage in high-bandwidth activities like remote learning, video conferencing and streaming.

From campus to community

When it comes to advancing the use of smart technologies, UTO focuses its efforts from the campus to the community. A critical component of this digital transformation is ensuring the right infrastructure is in place, like the Sidewalk Bridge Pro, to scale the use of smart devices effectively and efficiently across campus to improve the experiences and services to our community at ASU and beyond.