With the completion of the fall 2021 semester, Arizona State University's Department of Physics is highlighting a few of its award-winning students.

Antonella Semaan, who graduated with her Bachelor of Science in biophysics in fall 2021, received the Dean's Medal Award. Semaan was excited and shocked to have received the Dean’s Medal as a non-traditional student. 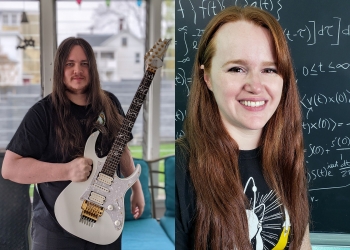 “I had a career change in my mid-20s. I'm 34. And I never really thought when I was younger that I would have the brains to pursue physics or something like that, but I was always interested,” she said. “In my early 20s, I was a sound technician, something that was completely unrelated to this, but I just wasn't fulfilled.”

Semaan started taking classes at community college, then discovered her love of biophysics, as it is an intersection between physics, biology and chemistry.

“The Dean's Medal was completely unexpected for me. I wouldn't have ever dreamed of getting an award like this. So for me, it's an honor and I am extremely happy,” she said.

Semaan is currently studying for the MCAT exams and hopes to go into the medical industry.

“I'm interested in radiology, because that entails more physics than other specialties," she said. "But I don't know, maybe when I'm in medical school, (I might) change my mind, but I think that I'm definitely going to want to stick to a specialty where physics is emphasized.”

Another award-winning student is Kris Ganzel, an ASU online sophomore double majoring in physics and astronomical and planetary sciences. Ganzel was awarded the OURS Program Scholarship, an award given to outstanding online natural sciences students.

“From pretty much day one, I started advocating for online students for better access to research projects, scholarships, things like that. And so I worked with the School of Earth and Space Exploration and then later the Department of Physics directly to really push for these kinds of opportunities,” he said. “I even founded a student organization last year, Sun Devil Stargazers. I pulled that organization and everything to show the administration that there was a demand for online students to get into research opportunities.”

Ganzel said to speak up about improving your education.

“No one's going to be mad at you for trying to better your education. A lot of times, what I’ve found is if there's something missing, it's because somebody hasn't thought of it, not because they don't want to provide it,” he said. “Your voice matters more than you think it does.”

For its third consecutive year, 365 Community Union will be hosting its twice weekly yoga program out of Sun Devil Stadium this spring. The spring 2022 series of Stadium Yoga classes will feature a lineup of instructors from studios all across the Valley, including Ahimsa House, Yoga Players Club, Arizona Yoga Company and De La Sol Yoga. The series is open to the ASU community and the general publ...

For its third consecutive year, 365 Community Union will be hosting its twice weekly yoga program out of Sun Devil Stadium this spring.

The spring 2022 series of Stadium Yoga classes will feature a lineup of instructors from studios all across the Valley, including Ahimsa House, Yoga Players Club, Arizona Yoga Company and De La Sol Yoga. The series is open to the ASU community and the general public alike and is inclusive for all levels of practice. 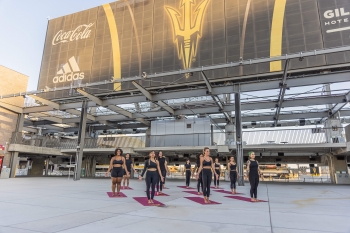 Led by local instructors and presented by ASU 365 Community Union, Stadium Yoga will kick off its spring 2022 series of classes on Jan. 11.

Complimentary to all participants, 365 Community Union’s Stadium Yoga program offers a unique experience to ASU and Valley community members that you won’t find elsewhere. Unlike other fitness programs where multiple classes might be scheduled as part of a plan or necessary regimen, Stadium Yoga allows participants to choose which days fit best into their schedule and register for as many or as few classes as they’d like. Participants are able to register for all of their intended classes all at once, on a weekly basis, or on whatever timeline works best for them.

The 16-week series will include 27 classes on select Tuesday afternoons in-person and Saturday mornings in a hybrid format. Each class will run for approximately one hour.

Registration for classes is required to participate and can be found on the ASU 365 Community Union website and social media channels. It is recommended that all participants bring their own yoga mat, towel, and water bottle.