Goldberg will serve as vice dean and professor of practice, and lead new programs and strategic partnerships in Washington, D.C. She will expand ASU's presence in the nation’s capital, which provides significant educational opportunities and leverages the expertise of world-class faculty across a wide range of issue areas. She will join the university in February 2022. 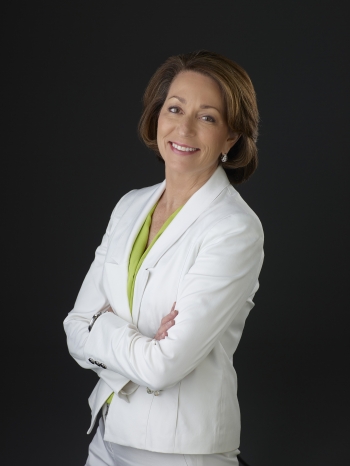 During her tenure as editor, National Geographic has been honored with 10 national magazine awards, three Pulitzer finalists and was twice named Webby Media Company of the Year (2018 and 2020). In addition to hundreds of other significant editorial awards, National Geographic also won a 2018 Scripps Howard Award for Environmental Reporting highlighting awareness and catalyzing action surrounding protecting the planet.

Goldberg also has been singled out repeatedly for her leadership, particularly around her work promoting women. She was the leadership honoree for her work uplifting women in 2020 from the International Women’s Media Foundation; has repeatedly been on the “most powerful” and “most influential” lists of women in media and in Washington; and won the Exceptional Woman in Publishing Award in 2015. In addition, Goldberg’s recent leadership accolades include landing at No. 7 on InStyle Magazine’s “Badass 50” list.

“I’m thrilled to join ASU, as this position combines things I believe in deeply: I can give back to our profession, help strengthen journalism during a challenging time for the free press and work at an inclusive public university with young people who will shape the stories of tomorrow,” Goldberg said.

“I also am excited to work with journalists and experts at the Julie Ann Wrigley Global Futures Laboratory and its College of Global Futures to help tell stories around how we are addressing and shaping our collective future options, including climate change — one of the trickiest stories to tell to a general audience,” Goldberg said. “I want to do what I can to figure out how to explain the threats to and opportunities for our planet and its inhabitants with greater accessibility, resonance and impact.”

“Susan Goldberg is one of the most accomplished editors and leaders in our industry. We are thrilled for her to share her expertise and passion with our students and faculty here at the Cronkite School,” said Dean Battinto L. Batts Jr. “Our D.C. presence is pivotal to our growth and continued success. Susan’s leadership and industry relationships will support and advance our strategy there, here in Phoenix, Los Angeles and beyond.”

“Society has placed multiple pressures upon the life-supporting systems of our planet, which has created a sense of crisis that has to be addressed from local to global scales with an urgency rarely seen before,” said Peter Schlosser, vice president and vice provost of Global Futures. “Susan’s ability to convey the immediacy of the need to find solutions to the problems humankind has created for itself, and doing so by seeing solutions as an opportunity rather than sacrifice, is an immense addition to our ability to shape a people-and-planet-positive future.”

Goldberg has worked as a top leader at several major news publications, including as executive editor for federal, state and local government coverage for Bloomberg News in Washington, D.C. She also was editor of the Plain Dealer in Cleveland, where the paper finished as a finalist for the Pulitzer Prize four times.