The James Webb Space Telescope is the largest, most powerful and complex space telescope ever built. It is expected to launch from the European Spaceport located near Kourou, French Guiana, no earlier than Saturday, Dec. 25, at 5:20 a.m. Mountain Time on the Ariane 5 rocket. Its destination is an orbit around the Sun-Earth second Lagrange point.

Webb, which is led by NASA with its partners, the European Space Agency and the Canadian Space Agency, will serve as the premier deep space observatory for the next decade, exploring every phase of cosmic history — from within our solar system to the most distant observable galaxies in the early universe, and everything in between. 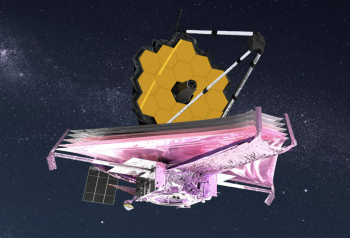 Artist conception of the James Webb Space Telescope, which is expected to launch no earlier than Dec. 25 from French Guiana on the Ariane 5 rocket. Photo credit: NASA GSFC/CIL/Adriana Manrique Gutierrez Download Full Image

Arizona State University Regents Professor Rogier Windhorst of the School of Earth and Space Exploration is a co-investigator and interdisciplinary scientist for Webb. He is joined by Research Scientist Rolf Jansen and Assistant Research Scientist Seth Cohen, along with a team of ASU postdoctoral scholars, undergraduate students and graduate students working on this mission.

“Rarely in a lifetime does one get a chance to be part of a major scientific mission that has the potential to be a total game changer in science,” Windhorst said. “The Hubble Space Telescope has been such a mission rewriting all textbooks in astronomy, and it is now coming to the dusk of its lifetime after 31 years in low Earth orbit. We currently live in an era where we are lucky enough to be able to witness two such missions with the launch of Webb.”

To celebrate this historic launch and highlight ASU’s involvement in this mission, ASU will hold a live launch event via Zoom with Windhorst and his team. In addition to play by play narration of the launch, the event will feature interviews with the ASU Webb team, live NASA coverage of the event and a public Q&A with the ASU Webb scientists. The event is free and open to the public. Pre-registration is encouraged.

A mirror this large has never before been launched into space

The Webb telescope consists of 18 mirror segments, which when combined, are over 21 feet in diameter. A mirror this large has never before been launched into space. After launch, the telescope will begin a three-day deployment process a month-long million-mile journey to its orbit around the sun in the second Lagrange (L2) point, where it will be locked into perfect unison with the Earth’s yearly orbit.

This orbit allows one side of Webb’s sunshield to always face the sun, Earth and moon, blocking their heat and light from reaching the telescope’s heat-sensitive optics. L2 is one of five positions in space where the gravitational pull of the sun and Earth balances the centripetal force required for a spacecraft to move with them, which is useful for reducing the fuel required for a spacecraft to remain in position. This orbit enables continuous communications with Webb through the Deep Space Network, an international array of giant antennas managed by NASA’s Jet Propulsion Laboratory.

Engineers on the ground will remotely orchestrate a complex sequence of deployments in the hours and days immediately after the launch of the James Webb Space Telescope. Credit: NASA's Goddard Space Flight Center

Webb’s powerful instruments: A combination of sheer size and sensitivity

Webb is an infrared telescope with unprecedented scientific power due to the size of its primary mirror and the extreme sensitivity and precision of its four scientific instruments. There are three near-infrared instruments (NIRCam, NIRSpec and FGS/NIRISS) and one mid-infrared instrument (MIRI), which will receive the light collected by the telescope and use a variety of tools – cameras, spectrographs, coronagraphs and other specialized pieces – designed to maximize the scientific knowledge gained from every observation. Each instrument also has a field of view that is unique in area, shape and orientation.

The ASU team will be working with NIRCam, Webb's primary imager that will detect light from the earliest stars and galaxies in the process of formation, the population of stars in nearby galaxies, as well as young stars in the Milky Way and Kuiper Belt objects.

“What makes Webb and its instruments so powerful is the combination of sheer size and sensitivity to near- and mid-infrared wavelengths to which Hubble is blind,” said Jansen, who is the team lead for the Webb North Ecliptic Pole Time-Domain Field. “Webb's compound mirror collects 6.25 times more light than Hubble's, so it can detect fainter objects. And at the wavelengths where Webb and Hubble overlap, Webb's view is up to 2.7 times sharper.” 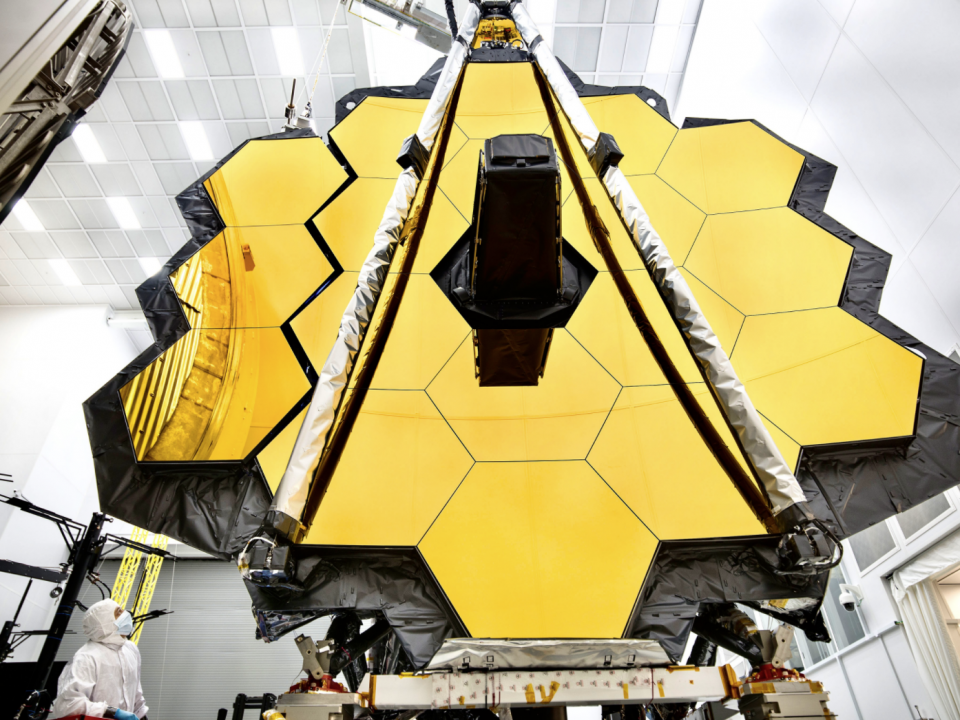 The towering primary mirror of NASA’s James Webb Space Telescope stands inside a cleanroom at NASA’s Johnson Space Center in Houston in preparation for testing in 2018. Photo credit: NASA/Chris Gunn

That capability is needed for the team to detect the very first clumps of stars or protogalaxies that lit up the universe.

“Those objects were much smaller and fainter than the galaxies we see in the local universe,” Jansen said. “So we need a very large telescope mirror and sharp vision to discern the shapes and nature of those first objects.”

For Cohen, his role on the team will be to process the data from NIRCam for detailed analysis and to catalog the galaxies detected by this instrument.

“More than a decade ago, our group did simulations of what we expect faint galaxies to look like with Webb, and I am excited to see how close we come to the predictions,” he said. “Beyond that, I look forward to the unknown and the surprises that a scientific instrument of this scale will undoubtedly deliver.”

And the wait for images will not be long after launch. Webb will begin gathering its first set of scientific observations after its commissioning process is complete, roughly six months after launch when all the mirrors have been aligned and all the instruments have been calibrated.

“We all have very high expectations of Webb,” Windhorst said. “In addition to revealing the secrets of the targets that we have planned for Webb to observe, perhaps most importantly, we hope that Webb will rewrite the science textbooks in ways that we could not have foreseen.''

ASU Webb researchers Windhorst and Jansen on what we can expect to learn from the James Webb Space Telescope. Credit: ASU/NASA

The Broadway League, the national trade association for the Broadway industry, added new members to its Board of Governors and elected ASU's Colleen Jennings-Roggensack as its new vice chair of the road.

At its annual meeting on Dec. 14, the membership added more than a dozen new members, including the arts and visionary leader Jennings-Roggensack. The Broadway League members include theater owners, operators, producers, presenters and general managers in North American cities, as well as suppliers of goods and services to the commercial theater industry. Each year, league members bring Broadway to more than 30 million people in New York and more than 200 cities across the U.S. and Canada. 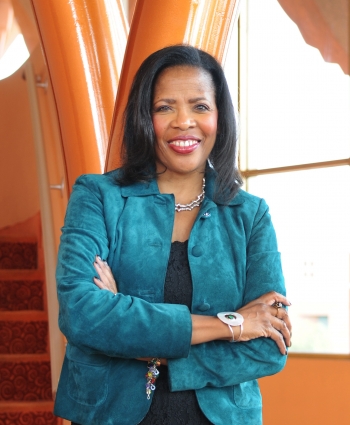 "Thank you, all members of the Broadway League, for the hard work, dedication and truly working together to keep our theaters open, audiences engaged, creatives, actors, crews, admin teams all pulling together. I am honored to be the incoming vice chair of the board for our governors,” said Colleen Jennings-Roggensack, ASU vice president for cultural affairs and executive director of ASU Gammage.

Jennings-Roggensack has artistic, fiscal and administrative responsibility for the historic Frank Lloyd Wright-designed ASU Gammage and ASU Kerr Cultural Center, with responsibility for Sun Devil Stadium and Desert Financial Arena for non-athletic activities. She oversees the activation and transformation of Sun Devil Stadium into a year-round hub of cultural activity as ASU 365 Community Union. Jennings-Roggensack was also appointed by ASU President Michael Crow to co-lead the Advisory Council on African American Affairs.

She serves on the Broadway League's diversity and inclusion committee, government relations committee, labor committee, and co-chairs the legislative council and road presenters/intra-industry committees. Jennings-Roggensack is Arizona's only Tony voter and serves on the Black Theatre United Summit and the 7G Committee. She is a founding and current member of the Creative Capital Board, a senior adviser to Women of Color in the Arts, a former Association of Performing Arts Professionals board president, has served on the National Council on the Arts at the behest of President Clinton and is a life director of the Fiesta Bowl.

Each member will serve a two-year term and will be eligible for re-election in 2023.

In addition, Lauren Reid will remain chair of the board for the next two years, finishing her three-year term, and Elliot Greene, chief operating officer of the Shubert Organization, was reelected as secretary/treasurer.