The list of things Sydney Campton accomplished during her studies at ASU is rivaled only by her goals for after graduation. 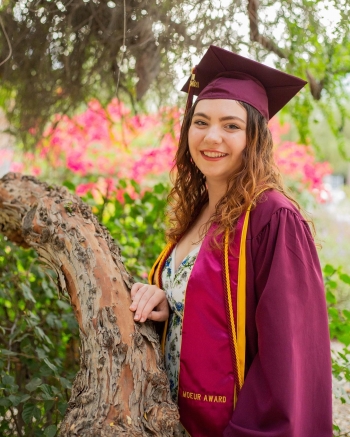 Sydney Campton graduated this week with bachelor's degrees in German and management as well as certificates in international business and cross-sector leadership. Last month, she was named the Dean's Medal recipient for the School of International Letters and Cultures. She has accepted a job as an account representative at CDW. Download Full Image

Campton graduated this week with bachelor’s degrees in German from the School of International Letters and Cultures (SILC) and management from the W. P. Carey School of Business. She also earned certificates in international business and cross-sector leadership.

Last month, she was named the Dean’s Medal recipient for SILC. The Dean’s Medal is awarded to one outstanding graduating senior from each of The College of Liberal Arts and Sciences’ schools and departments.

“I had no idea that the German department even nominated me for this award, so I was shocked and honored” to find out she was this semester’s Dean’s Medalist for SILC, Campton said. “To be recognized for all the time and effort I put into not only my classes but also the German club, being a SPARK German teacher and being a research assistant, is so incredible. Every activity I did and every person I interacted with at SILC shaped me and helped me through my education and helped me get to where I am today to be awarded the Dean’s Medal.”

In the classroom, Campton was recognized by all her professors as a dedicated, thoughtful student who was always eager to learn more and share her knowledge with her peers.

“No matter the context, Sydney always produced outstanding work that speaks to a desire to understand complex sociopolitical and business-related issues from the perspective that study of a second language and its cultural knowledge affords,” said German Lecturer Christiane Reves, who taught Campton in several courses as well as an independent study. “She is a deep thinker, intuiting complex connections that others may have trouble seeing, and is then able to articulate these ideas to a more novice audience.”

The praise went both ways. Campton said Reves was the professor who taught her the most during her time at ASU, always finding ways to apply the topics they were learning in class to real-world situations.

“She challenged me to challenge myself and not to settle for anything less than my best,” Campton said. “She helped me remember that it is important to apply my own passions to my schoolwork and to put my own personal touch on every project. Without her guidance and support, I would not be where I am today.”

Another key figure in Campton’s academic journey was her mother, who reminded her to dream big and cheered her on at every step of the way.

“My mom inspired me to never give up even when things get tough,” Campton said. “She is the most resilient and caring person I know, and she has shaped me into the woman I am today. My mom always encouraged me to pursue what interests me and to make a difference wherever I am.”

Campton credits her success to finding the courage to pursue the opportunities she was interested in even when she was nervous to apply or worried she wasn’t qualified.

“Make the most out of every opportunity given to you because you never know when you will get that opportunity again. Even though it may be difficult and push you out of your comfort zone, it will help you grow, and you will thank yourself later for taking the risk,” she advised future students.

Taking the risk is how Campton ended up earning two degrees and two certificates, but even that wasn’t enough. She was also a student of Barrett, The Honors College, for which she completed an honors thesis project, and she was a member of the Next Generation Service Corps, a four-year leadership development program that brings together students from across all of ASU’s colleges and schools.

Campton’s independent study course with Reves allowed her to research female volunteers for nongovernmental organizations that provide services to immigrants. Her honors thesis focused on bias against women in the workplace in Germany.

“As a Barrett student and member of the Next Generation Service Corps, she was able to deepen her understanding of global sociopolitical and economic challenges. She showed excellent initiative by not only comparing the existing literature but by also conducting and interpreting her own interviews in German,” Reves said of Campton’s thesis work.

And outside the classroom, Campton was just as passionate about the student organizations she helped lead, the internships she completed and the opportunities for success that she pursued.

She served as the director of outreach and later the president of ASU German Devils for several semesters. She taught German to elementary and middle school students through the SPARK program, part of a partnership with the Goethe-Institut. She interned for the virtual volunteerism and community drives departments at the Society of St. Vincent de Paul, assisting homeless individuals and low-income families in the Phoenix area. And this past summer, she interned in sales at technology solutions provider CDW.

So what’s next? Campton said she will be returning to CDW to work as an account representative. From there, she hopes to become a global sales manager and would also like to return to school to earn a master's degree in business administration. Her goal is to work outside the United States.

“I'm excited to start my career in sales and hope it will lay the foundation for my dream of being an expatriate one day,” Campton said. “I love learning languages and cultures and would like to use those skills in my professional life, as well.”