This green infrastructure project, completed in 2017, transformed a portion of the asphalt roadway into an eco-friendly pedestrian mall. 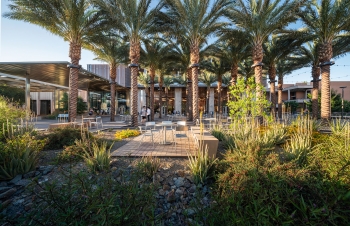 A view of Orange Mall in front of the Student Pavilion on the Tempe campus. Download Full Image

“The goal is that major malls on the Tempe campus will be transformed to reflect the design concepts and tenants of this development,” said Byron Sampson, associate director of the Office of the University Architect. “The Nelson Fine Arts Center complex was recently done with similar strategies for stormwater management and adaptive and engaging outdoor spaces for our students.”

The mall’s extension also provides event space for the new Student Pavilion and serves as a social gathering spot for the ASU community. Seating and a shaded palm court offer visitors an enjoyable outdoor living space.

Editor's note: This story is part of a series of profiles of notable fall 2021 graduates.Angel Morales, a fall 2021 biological sciences Arizona State University grad from Phoenix, always knew he wanted to work in the medical field. Knowing what he wanted to study was easy, but choosing where to study it meant taking many factors under consideration. Morales wanted a school with strong medica...

Angel Morales, a fall 2021 biological sciences Arizona State University grad from Phoenix, always knew he wanted to work in the medical field. Knowing what he wanted to study was easy, but choosing where to study it meant taking many factors under consideration. 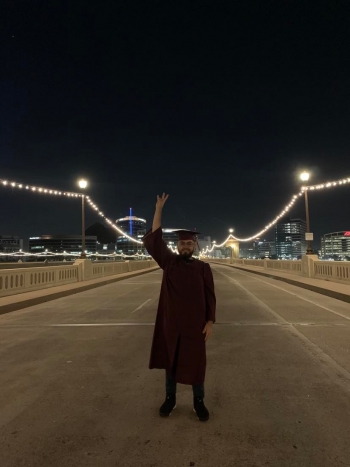 Morales wanted a school with strong medical and science programs, a place that offered dependable scholarship and financial aid resources and a place that felt like home.

After attending Barrett Summer Scholars, an Access ASU summer camp, Morales felt like ASU could be that home. The camp allowed Morales to stay on campus in the residence halls for 10 days and experience what being a Sun Devil would feel like.

“Attending BSS in my transition to junior high to high school helped me decide to come to ASU because I enjoyed the community, diversity and support that they offer,” Morales said. “I went through this program with other friends and peers, which also persuaded my decision to come to ASU at an early age. I also fell in love with the campus and scenery."

During his time at ASU, Morales worked as a success coach for TRIO Upward Bound, a program that works to support low-income students, students with disabilities and veterans to be successful in college.

“I would pretty much reach out to students. And just kind of offering tutoring services, following up with them with resources and just kind of be an open resource for them,” Morales said.

According to Morales, being a success coach for TRIO allowed him to reflect on where he came from, be proud of how far he had come and help others do the same.

“It kind of just always helped me to reflect, to network and to develop all my skills as a success coach,” Morales said.

In addition to TRIO, Morales was also involved in Next Generation Service Corps, participated in intramural basketball and was a member of Tau Psi Omega.

As Morales prepared to graduate, he reflected on his time at ASU and shared his advice for his fellow Sun Devils.

Q: What was your “aha” moment when you realized you wanted to study the field you majored in?

A: Well, I think when I was younger, I always knew I wanted to be in the medical field because I liked helping people.

Something I've always had interest in I would say, I guess, is working with my hands. Pretty much how I decided on my major was initially in sixth grade, I always knew I wanted to specialize in being a doctor or practitioner. Specifically, neurology was something I was always intrigued by. So I think I've always kind of known what I want to do at a young age.

Q:  What’s something you learned while at ASU — in the classroom or otherwise — that surprised you or changed your perspective?

A: I would definitely say that anything is doable or attainable. I would say when I was younger, I didn’t really grasp the concept of, you know, going to med school. So I think that's something that I learned. I think, with being in my major, it just makes everything seem more attainable.

A: They helped me out financially a lot. So that was probably the main reason. I’ve also been affiliated with ASU for a long time. I’ve had cousins or distant family members who have attended ASU. I’ve done programs like Barrett Summer Scholars. I did that when I was in eighth grade, so I had an experience of what it was like to dorm on campus for about a week.

A: I would say for them, no matter what, just do it. I know that’s like a Nike slogan. But I think that’s something that I’ve kind of done. I think no matter what kind of stage you’re at in life, even if you’re procrastinating, just kind of work on it. There’s no better time than now.

A: My two favorite spots are probably the SDFC (Sun Devil Fitness Complex) and “A” Mountain.

A: Nutrition. I would make healthier food more accessible and less expensive. So I would just definitely try to help out, because I think that would help out with obesity issues, cardiovascular diseases and stuff like that.