A student storyteller is starting his own next chapter this semester. 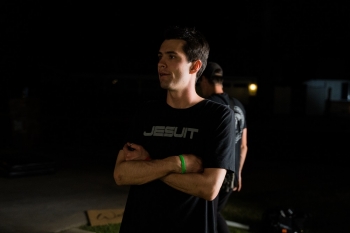 Connor Newton on set producing a capstone film for a Herberger Institute for Design and the Arts classmate. Download Full Image

Connor Newton, who graduates this month with his degree in film and media production, feels ready to enter the entertainment industry after a great academic and professional experience in his student worker job as a videographer for ASU Student Life, a news site run by students and for students through ASU Educational Outreach and Student Services.

“It’s been amazing working with Student Life. It has helped me to grow so much during my time at ASU. My boss, Macy, taught me probably over 90% of the video creation and editing knowledge I have accumulated,” he said. “I feel prepared to enter any collaborative work environment going forward, and I also feel I have confidence in my video skills overall.”

Newton, who is from Phoenix, said the community he built in his job and also in the Sun Devil Roundnet club helped him make lasting connections.

“The community of other student workers made the job even more of a blessing. Whether they were other videographers, photographers or writers, the other Sun Devil storytellers were all super passionate about their work. It was a great experience to be surrounded by like-minded students who wanted to create media and tell stories. … Also, my Student Life peers have become some of my closest friends, people who I feel I can be vulnerable with and talk about anything with. I hope to maintain many of these relationships after graduating.”

One of Newton’s favorite projects in his time at ASU Student Life was the Haunted ASU series, which explores different spooky rumors about each ASU campus. It was a fun collaboration with the Student Life newsroom and also taught Newton a few extra skills.

“It was probably the biggest and most time-consuming project that I worked on, but it was so rewarding when I completed it. I learned a ton of new skills, such as how to create an intro graphic. I also enjoyed the collaborative aspect of the project, and it helped me to hone my creative storytelling skills,” he said.

In addition to his videography and video editing work, Newton also helped ASU students tell their own stories at the Digital Creative Studio on the lower level of the Memorial Union, where ASU Student Life staff work and are available to help other Sun Devils make their own media projects. Newton also served as a producer on many capstone films for his Herberger Institute for Design and the Arts classmates and was a Sun Devil Kids Camp counselor; he also volunteered with the Phoenix Film Festival and the Arizona Youth Ballet.

As he prepared to graduate, Newton reflected on his time at ASU and shared his advice for fellow Sun Devils.

Answer: Back in high school I went to a prescreening for “Terminator: Genisys.” I went with my mom, and we got to see a very early version of the film where they hadn’t completed a lot of postproduction aspects yet, like special effects or sound or music.

I thought it was super cool because we could see the film while it was a work in progress. I basically got to see what they were striving to make, and it was like a little sneak peek into the filmmaking process. I started going to a ton of film screenings and decided that I wanted to study film soon after that.

A: One thing I realized was how lucky all of us ASU students were to be able to attend college. I had gone to a private Catholic high school, where 99% of the students attended college, so I assumed that was the norm. After talking to my classmates at ASU, I realized that a lot of them were from smaller towns or communities where only a handful of students went to college every year.

A: To be honest, I chose ASU because it was the most affordable. Not the most glamorous answer, but it’s basically free for me to go here.

A: Professor Gregory Bernstein taught me a lesson about simplicity. He said that a lot of the time in high school or just in our lives we learn that writing more complexly or using larger words is a sign of intelligence and education.

However, it is often best to just use simple words and sentences that convey your meaning the most clearly. I think that this advice has helped me to become a much better communicator in general.

A: My advice to other students would be to put your best effort into everything you do. If you make the choice to do something, stand by that choice and see it through. Commitment is important in reaching any goal in life. The intrinsic reward of achieving something that you stuck with through tough times is immeasurable.

A: My go-to spot was always the second floor of the SDFC (Sun Devil Fitness Complex). Hardly anyone ever goes up there, so I used it countless times for studying. It’s also a great place to work out if you don’t want to be surrounded by gym junkies.

A: I am currently applying for jobs in the entertainment industry. I am focusing on positions in nature-related companies such as National Geographic or producer positions within smaller companies. I also have a video production business called GecoStudios, which focuses on making video content for Valley businesses.

A: This might be controversial, but I would tackle the issue of immigration. A lot of my friends or their families were or are undocumented and have little to no ability to acquire documentation.

My best friend is a DACA student and has never met his grandparents in Mexico for fear of being unable to return to the States. I would help people like him get citizenship and lobby for policy change to allow this process to be easier for future immigrants.

Editor's note: This story is part of a series of profiles of notable fall 2021 graduates.It took just one geography class for Juliette Clermont to get hooked. Entering Arizona State University as an astrophysics major, Clermont took an introductory physical geography class with an enthused professor who piqued her interest. Her curiosity about the world and the places, spaces and relationshi...

An education worth waiting for

It took just one geography class for Juliette Clermont to get hooked. 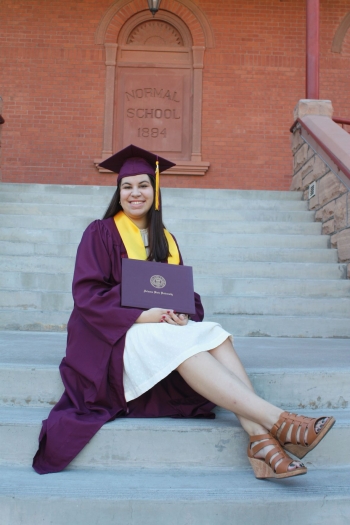 Following graduation, Juliette Clermont is interested in working for the National Park Service and using her education for land conservation and sustainability. Download Full Image

Entering Arizona State University as an astrophysics major, Clermont took an introductory physical geography class with an enthused professor who piqued her interest. Her curiosity about the world and the places, spaces and relationships within it grew. She changed her major to geography the next semester.

“I took ‘Intro to Physical Geography’ with Dr. Randy Cerveny and I knew it was for me,” said Clermont, who is graduating this December with a Bachelor of Science in geography and a geographic information science (GIS) certificate from ASU’s School of Geographical Sciences and Urban Planning. “Dr. Cerveny was so enthusiastic about geography and everything that it entails that I just had to take more classes.”

Clermont, who is interested in physical and planetary geography, says that although she didn’t know much about geography in the beginning, she was pleasantly surprised to learn about the different themes and broad range of topics geography covers.

“I knew next to nothing about geography when I switched my major. It was definitely a leap in the dark for me, but it really paid off,” Clermont said. “I think the most surprising thing was how wide-ranging this degree is — I could go into meteorology, GIS services or even an ambassador program with a geography degree.”

Following graduation, Clermont is interested in working for the National Park Service and using her education for land conservation and sustainability.

“I did a project a few years ago focused on land-use change in a national park that affected the habitability of the California condor, and I am sure that is where the love for conservation comes from,” Clermont said. “Shoutout to Professor (Andrew) Trgovac and GIS 311.”

Ahead of commencement, we asked Clermont a few questions about her time at ASU.

Answer: I chose ASU because it was my home school. All of my family members went here, and I was excited to finish off the Clermont legacy here.

A: School is hard, and you are not the only one struggling. Talk with your professors if you are struggling, utilize the counseling services at Student Services — please never forget that your health has to come first.

A: I lived off campus so I did most of my studying at home, but I have a soft spot for the Hayden C5 classroom. It's where the Album Listening Club that I am a part of meets, and it's where I met so many of my best friends. Join clubs.

A: I am still applying pretty much everywhere, but I would love to work somewhere that allows me to use my GIS certificate. I love GIS and mapmaking, and if that's what I did for the rest of my life, I would be happy.

A: Climate change. Even with $40 million, a number that I cannot even fathom, it wouldn't be enough. It would be more than what a lot of other countries are doing, but it would barely scratch the surface.